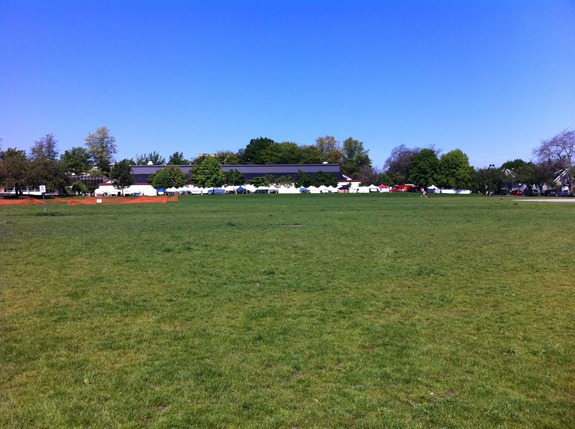 A view of the Kits Farmers’ Market on a Sunny Sunday from across the Kitsilano grass field. 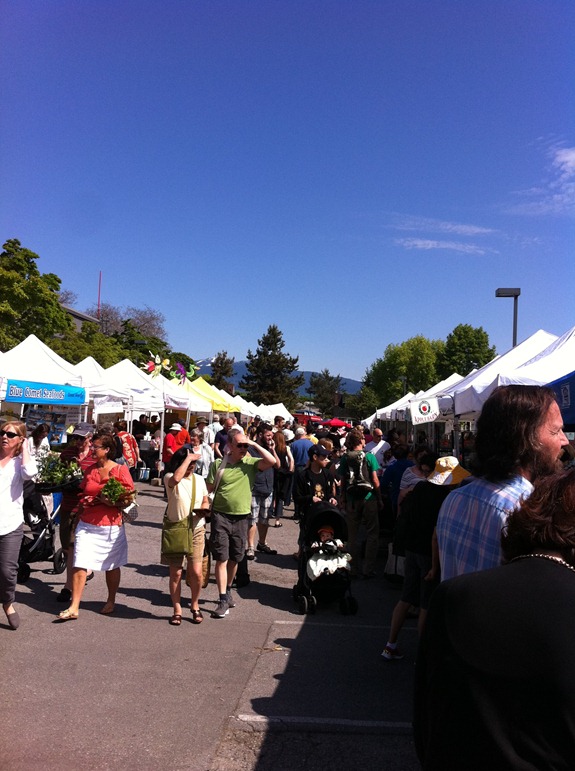 Crowded with tons of people, strollers and dogs, the Kitsilano Farmer’s Market is a bustling hive of activity for locals on a Sunday morning. 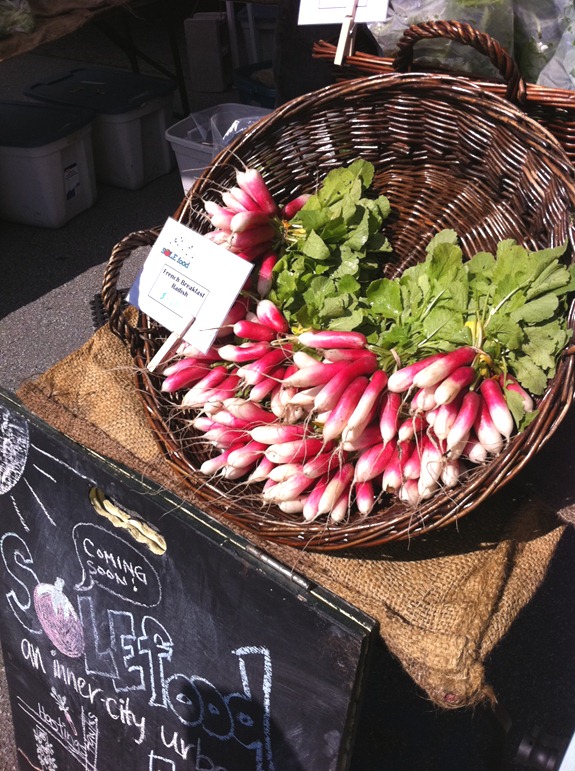 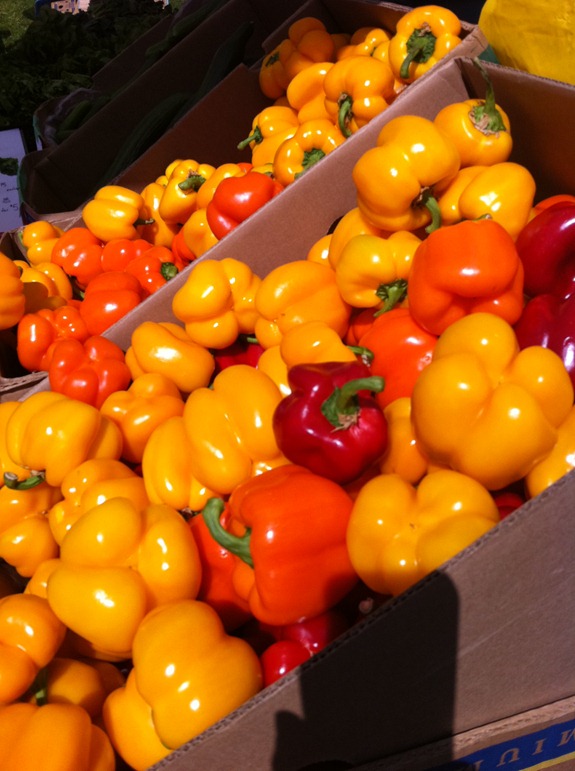 Most of the local produce at this time of the year consisted of tomatoes, peppers, and some veggies but local fruit have not really come in yet. 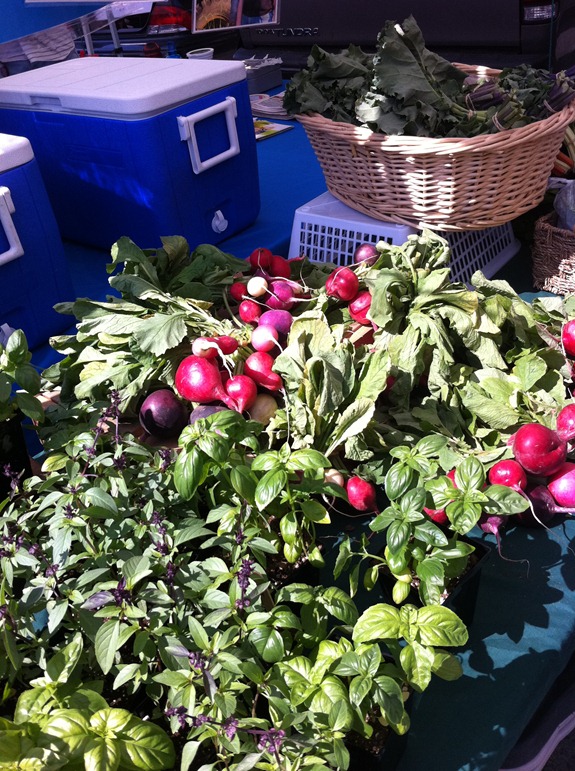 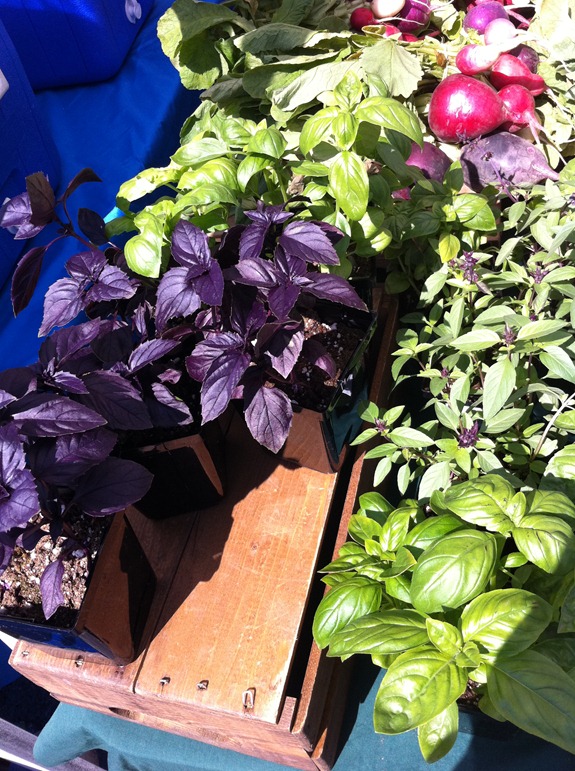 There are herbs in pots to buy as well as tomato plants and other veggies. 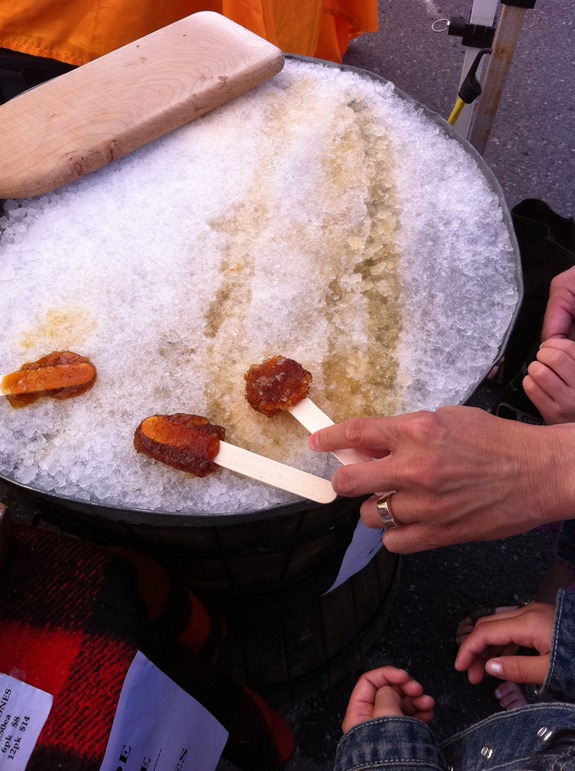 We tried our hand at making maple taffy.  Be forewarned though that the taffy is extremely drippy and sticky to eat.  We should have gotten a cone instead. 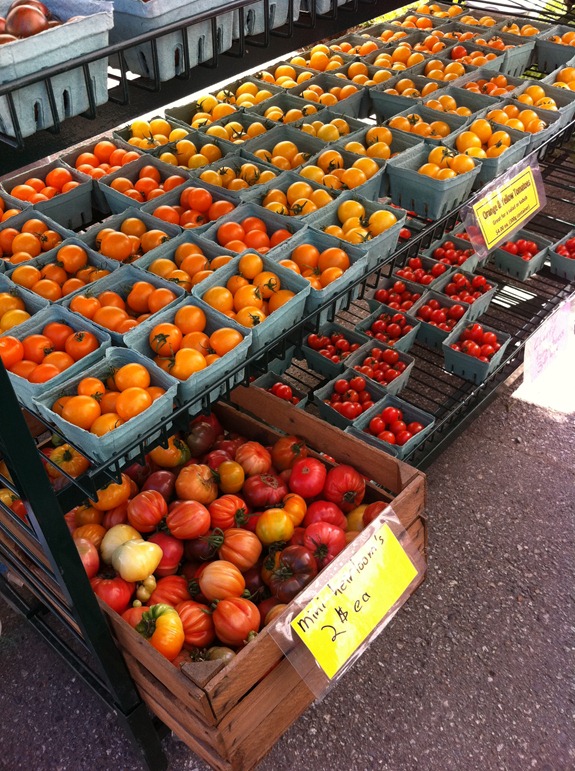 These local tomatoes looked gorgeous so we bought a bunch.  Unfortunately, when we ate them at home, the skins were really hard and chewy.  I think this is because it’s not tomato season. 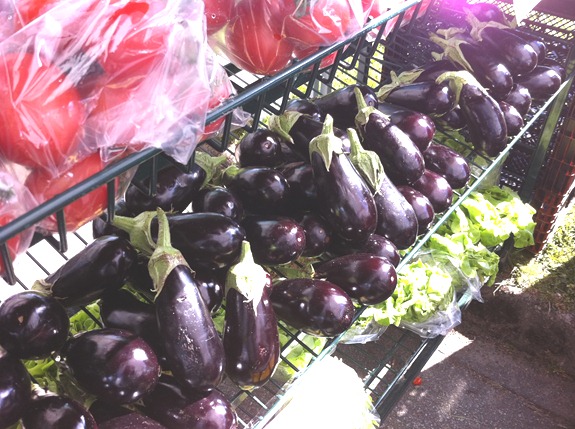 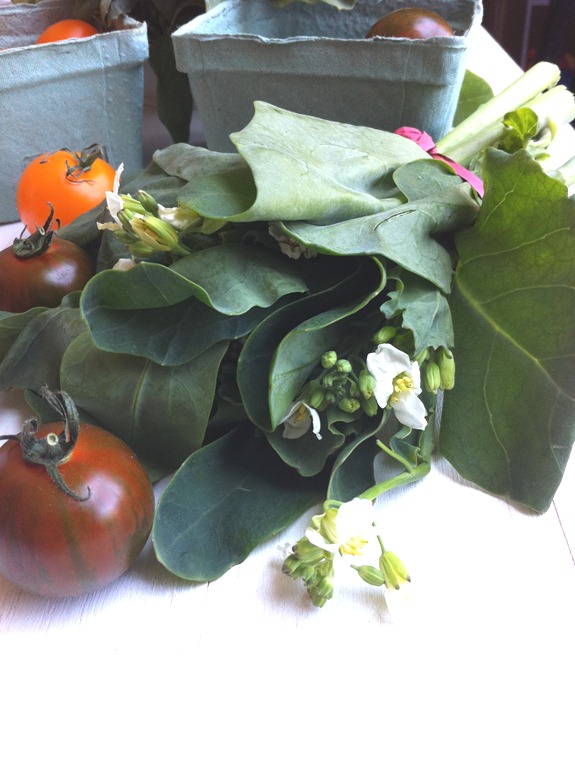 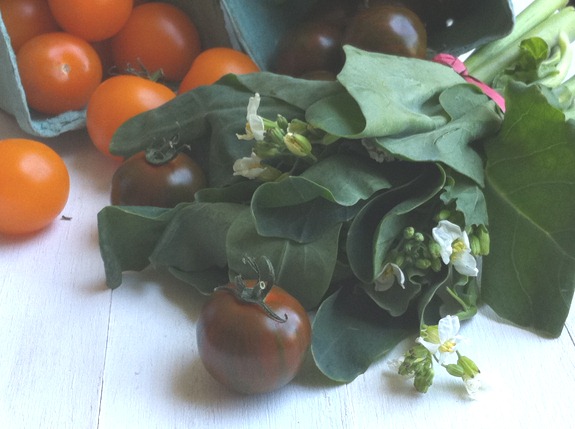 We picked up some locally grown GaiLan and had that for dinner.  It was fresh, tender and yummy. 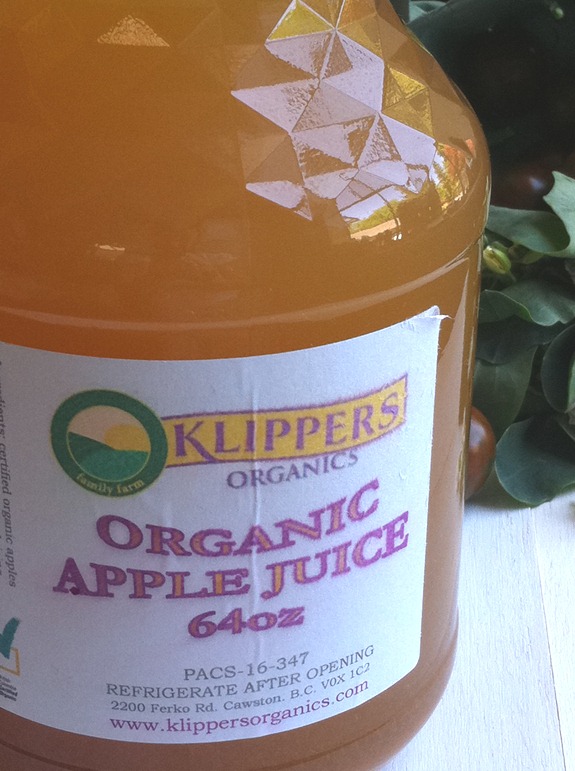 Here’s the huge jug of apple juice we purchased.  We had to lug it around, so my advice is to buy this last before you leave! 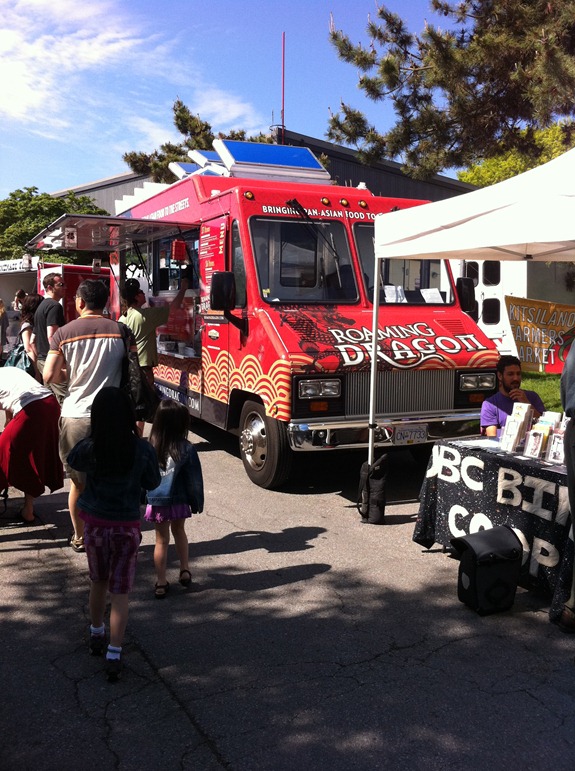 The Roaming Dragon Street Food Truck resides at the entrance to the Kits Farmers Market.  We ordered most of our lunch from the truck. 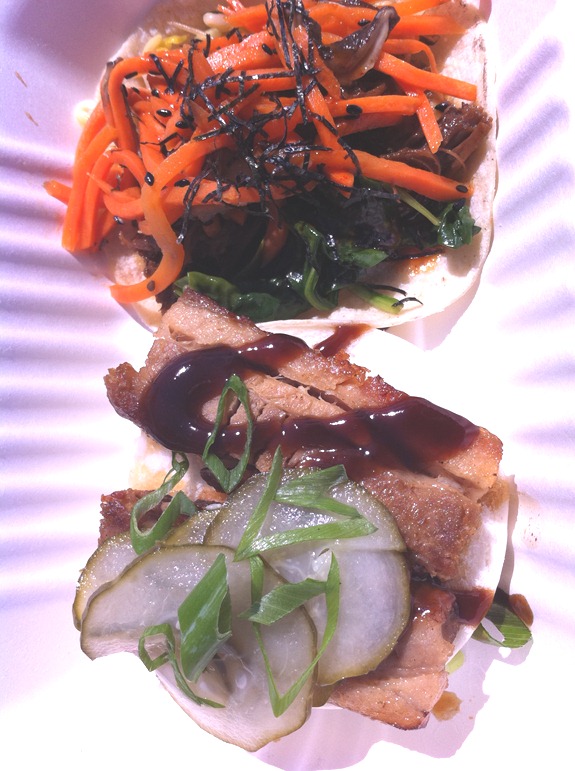 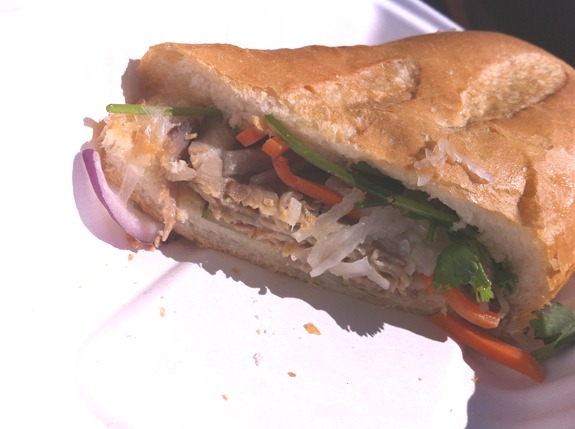 Vietnamese sub.  This sandwich was by far the most disappointing.  I was looking forward to the pickly vinegary punch of the fresh veggies, but was sorely disappointed that the veggies didn’t have any pickle flavour at all.  The veggies were fresh and abundant but that was about it.  The meat was not typical of the Vietnamese subs you can get in local Vietnamese restaurants, so that too was disappointing.  No pate flavour,  no thinly sliced jalapenos for heat.  This was so blah it was like eating a regular sub sandwich.   This is fusion at its worst.  They need to kick this one up a lot. 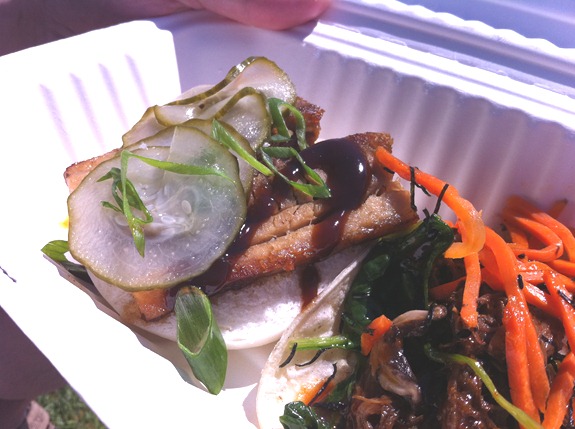 Korean Shortrib Taco:  The Korean taco was a mess to eat.  It was okay but fell apart very easily.  I can’t distinguish anything Korean about it though so perhaps though it’s good, it needs some tweaking.   There was something that resembled pulled pork, but there wasn’t a Korean flavour there to be had.  Coupled with the soft taco shell, my tastebuds were confused.   Rating:  4.5/6

Considering that it’s street food, it sure beats plain ol’ hot dogs any day.  However, I think Roaming Dragon can raise the bar now that they’ve established themselves.  They should tweak their sauces and work on the veggies…perhaps employing pickled veggies  (pickled daikon and carrot work wonders) and fresh jalapenos to pack more flavour punch. 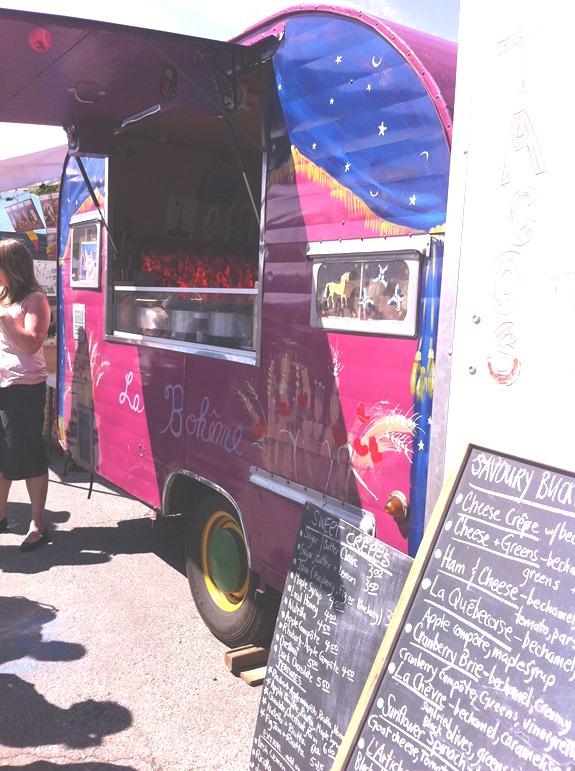 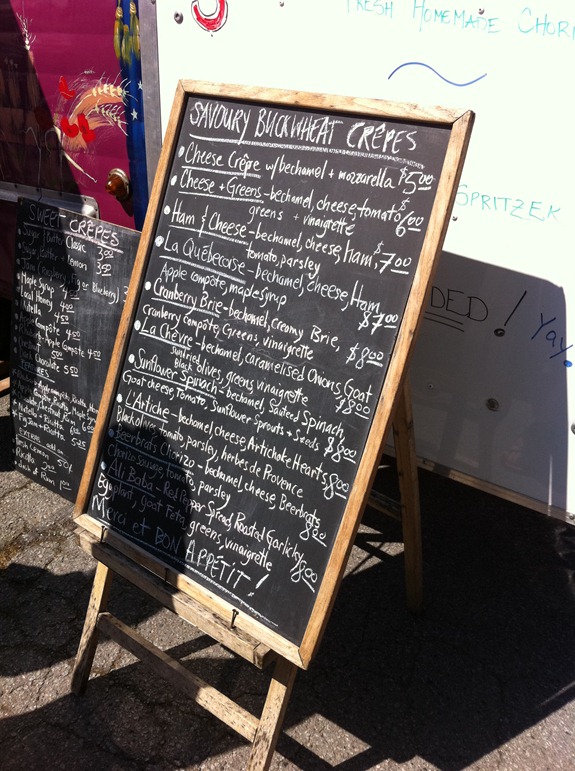 The lineups were crazy long for both La Boheme and Roaming Dragon.  It’s best to split your party up and line up with everyone’s order for your party.   Multi-task.

I ordered the Ham and Cheese crepe for Bebe.  I waited a mighty long time with a silly woman in front of me holding on to her dog’s leash.  It was no small dog and the leash was held long.

***Look away...here comes a RANT!  Begin rant:   Having had several dogs in my lifetime and recently a family dog that recently passed (rest her little doggie soul) I feel that I can safely rant about dog owners in Vancouver (and elsewhere!) who have no common sense in packed crowds holding on to their dogs’ leashes.  Rein it in!  Hold your dog close!  It’ll get stepped on and it’ll get tangled up among people.  It’s low to the ground and it’s in fact not an appropriate place for your dog.  Leash it up on a sunny patch of grass to a nice shady tree trunk and allow it to wait in peace as you purchase your goodies.  The Kitsilano grass field was nearby,there were tons of trees and I don’t know what possessed her to drag her dog through a crowd packed like sardines.   Don’t make it walk on the hot asphalt dodging swinging grocery bags, enduring the relentless heat and being tantalized by the street food!  Crazy owners.  The small consolation is that she had her dog on a leash.  Poor thing.  It looked hot.  Anyway, this woman and her dog took up about 7 square feet of space in the lineup.  It looked so ridiculous.  It was so crowded at the market that there was barely room to move, yet there was this huge space created around her by the way she held on to her dog leash.  It’s not considerate to the people in the crowd or to the dog.     ...end RANT***

After a seeming eternity, it was finally my turn and I received my order.  By the time I reached the front, I noticed that the buckwheat crepes are not actually made to order per se.  In fact, the crepes are pre-made and folded in quarters. They’re stacked and sit nearby awaiting fillings.   When an order comes up, it’s unfolded and warmed up on a crepe pan with some butter and then the fillings are piled on to heat up.  I was kind of disappointed by this, but at the same time kind of understanding of the fact that the line-ups would be even more huge if they didn’t make these crepes ahead of time.  Oh well, can’t have it all I suppose.  They had a great selection of fillings and if I were ordering for myself instead of the kids, I would have had something with veggies and cheese like the L'Artiche (artichokes, bechamel, cheese, black olives, herbs).  I think I may have rated it higher than them too because I like buckwheat everything whereas my kids like refined flour crepes. 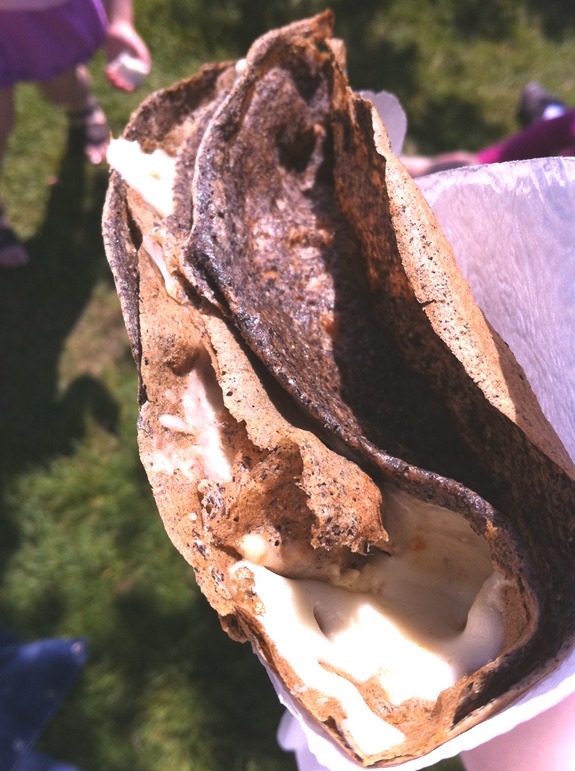 Lots of melted cheese and ham.  The crepe was on the dry side.  I don’t know if that’s because the crepe is pre-made or if that’s the nature of their buckwheat crepes.  The girls didn’t eat the crepe near the edges but ended up scarfing the filling mostly.

Take your food, meander to a patch of soft green grass near some trees on the grass field behind the market and eat your goodies.  There's not much in the way of seating within the market and it's too congested to enjoy your meal anyway.  Looking out towards the field at the girls' softball team playing in the distance under sunny blue skies, it was quite a feel good Vancouver day.

There were other food trucks around, a local bakery making artisanal breads, a local chocolate artisan, pastries and other yummy baked goods that really tempted me…you get the drift.  There was even a bike clinic. Cool.  Definitely, this is something we’ll have to do again, but closer to local berry and fruit season!