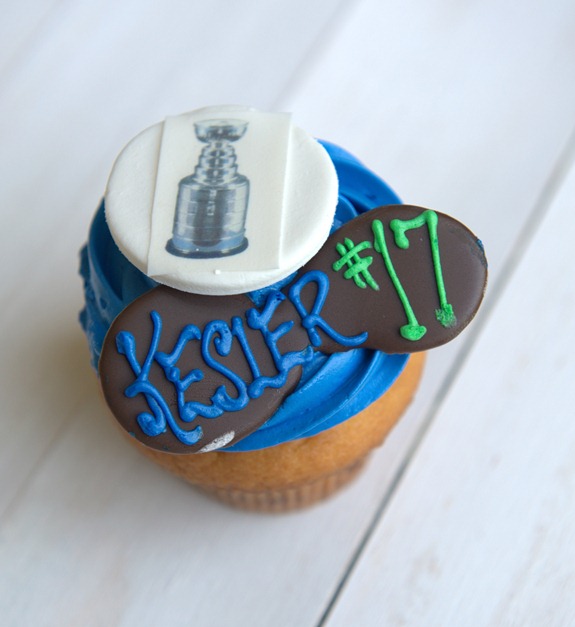 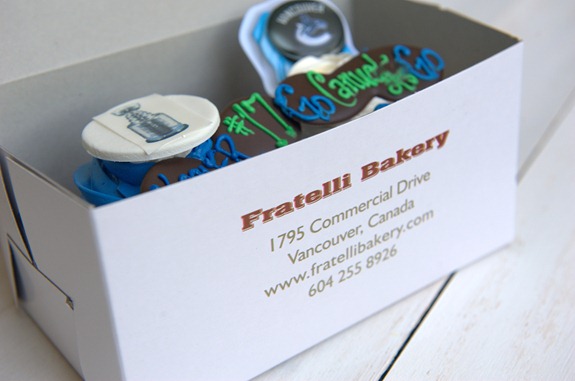 When I read today’s Vancouver Sun, I saw an article featuring Canucks Cupcakes from Fratelli’s Bakery on Commercial Drive…my old high school stomping grounds.   We gathered up the gals and high-tailed it to “the Drive” to do some grocery shopping and buy a couple of Canucks Cupcakes for dessert while watching the game tonight. 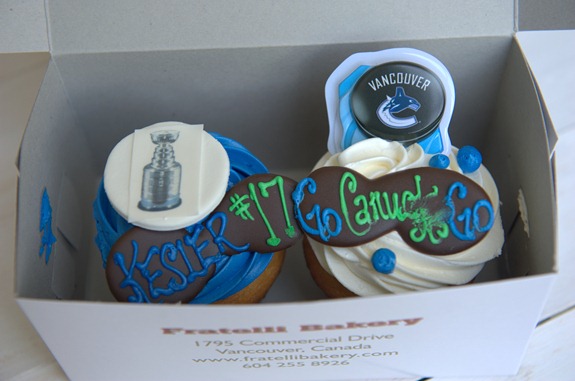 Upon opening the box, I was so disappointed to notice that I had been given a cupcake with smushed icing! 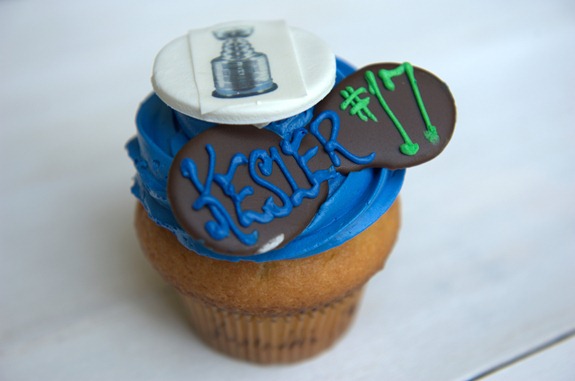 Bebe’s grade 2 class is helping to decorate one of the doors in their elementary school in honour of Kesler.  Every class is assigned a different Canuck.  So cute.   Her own personal contribution to the door was a little collage of newspaper clippings on blue and green construction paper.  I also have an affinity for #17 because it used to be Patrik Sundstrom’s number (do you remember him?) and I had a little crush on him when I was a teenager.  I was into everything Swedish at the time.  I even wanted to travel to Sweden in my grad year (though I never did get to do this); I had a Swedish penpal who was from Uppsala and I knew way too much about Thomas Gradin, Lars Lindgren, Lars Molin and Sundstrom.   In recalling my formative years, I still fondly refer to this as my “Swedish phase”. 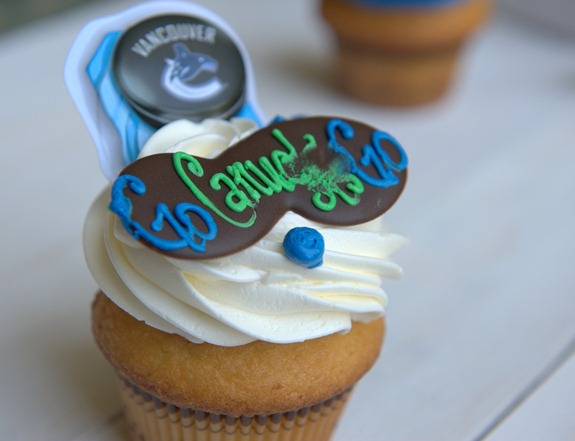 Bib wanted her cupcake to say “Go Canucks Go”…but she often ends up saying something that sounds more like “Coconuts Go!”  She can’t read…so it wasn’t as disappointing for her to  have the one with smushed writing. 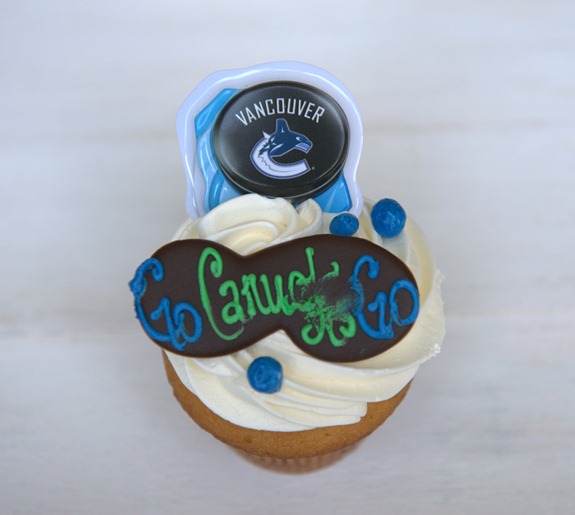 Commercial Drive certainly has changed a lot since the 80’s when I hung around the bakeries and pastry stores at lunch hour with my friends from the nearby highschool.  We would call the local Italian restaurant and order a pizza from the pay phone in our school hallway…and then pick it up at lunch time; bringing it back to our school hallway to eat!  Yum!  We also frequented the many Portuguese and Italian markets and bakeries along the Drive for sandwiches, doughnuts and pastries.  It was an excellent place for a teenager to grab great eats at lunchtime. 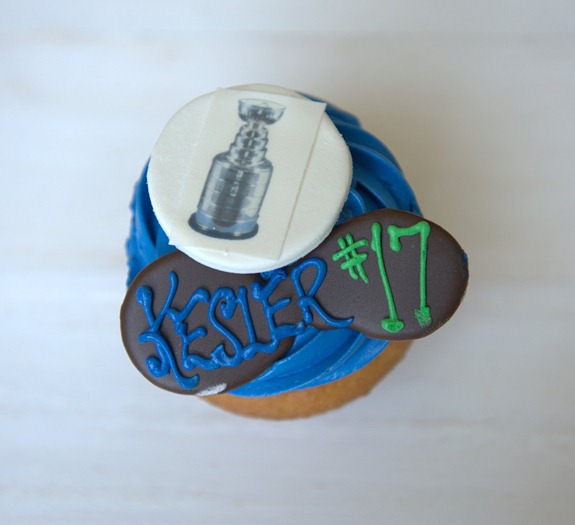 I’m not surprised that you could find Canucks Cupcakes on Commercial Drive.  There are some intense hockey fans in the neighbourhood.  Back then it was “little Italy” and my friend, who was Portuguese, also noted that there was a huge Portuguese population along the Drive.  I recall the Canucks used to practice at our highschool rink in the 80’s.   All the coffee shops, restaurants and eateries all have a devoted fan base as seen by the Canucks banners and signage all about.

Today, there was a huge lineup at Fratelli’s.  They also have a little cafe area to sit and enjoy an espresso along with your pastries.  The pastries all looked fabulous, but I only had eyes for the Canucks Cupcakes today.  I would say that today’s Commercial Drive has changed quite a bit.  The old-timers have left and the whole neighbourhood has become kind of gentrified with granola-lovers, organic stores, upscale kiddie clothing boutiques and high-end eateries.  A few of the old institutions are still around like the Santa Barbara Market, which I shop at every time I visit Commercial Drive. 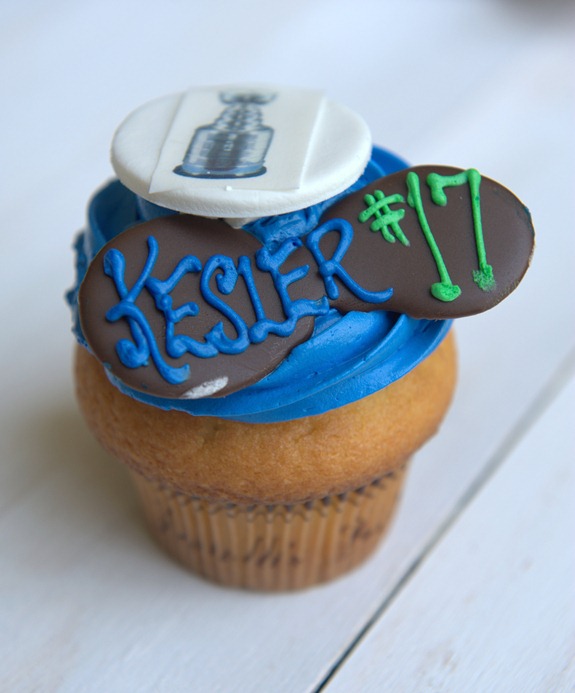 Everything was edible on this cupcake.  The Kesler cupcake had a Stanley Cup image that was made with edible ink.  It was stuck to a circular piece of fondant.  The actual image wasn’t so tasty (but it was edible) and the fondant Bebe seemed to like.  She popped the whole fondant circle in her mouth.   The blue buttercream was so heavy with blue food colouring pigment in order to get the exact Canuck colours, that it dyed my hand as I cut into it and you can imagine the blue mouths that resulted!  Tasty though. 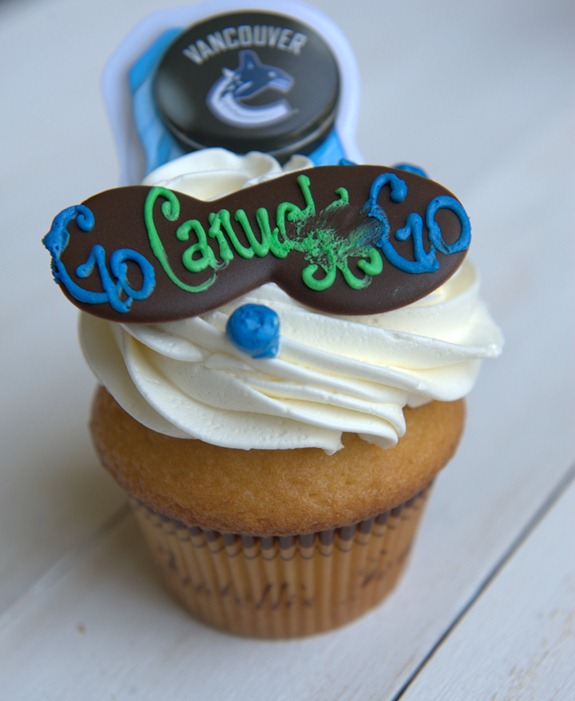 The “Go Canucks Go” cupcake had a little plastic pic with the Canuck logo on it that of course you don’t eat…but Bib kept it as a souvenir.  Sometimes the little decorative pic is what the girls are all gaga about anyway.  She loved the white cake and left the buttercream.  She doesn’t love frosting at all and usually scrapes buttercream off cakes…unless it’s just whipping cream.

I just sliced the cupcakes in half and was pleasantly surprised to discover PASTRY CREAM! Just like our Vancouver team,this cupcake has depth! 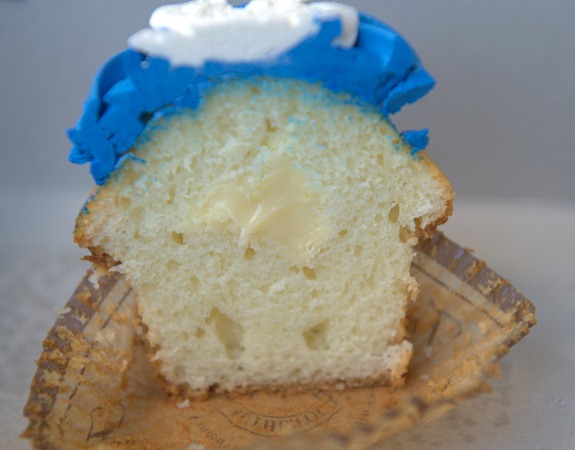 Here’s the cross-section showing the surprise pastry cream.  The cupcake crumb was flavourful and the pastry cream cool and custardy.  I thought the cupcake here at Fratelli’s beats any of the ones I’ve had at the other “Cupcake” specialty stores in town.  Those are just horrible, dry and super-sweet.  Their cakes taste like cardboard.  The only thing those other places have going is the decorations. 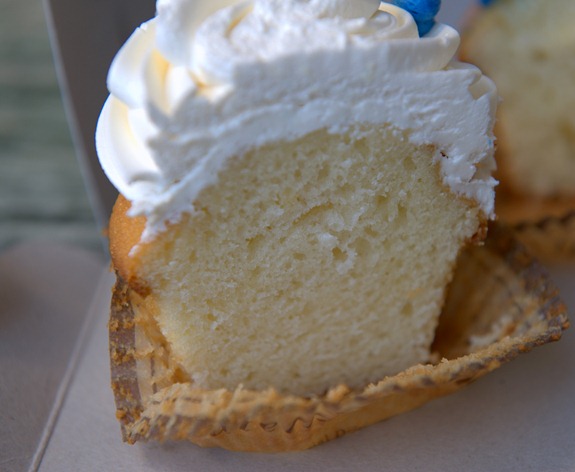 By the way, right after we ate these two cupcakes during the second intermission, I had barely cleaned up the dishes of blue frosting and the third period went into overtime...and then Burrows scored just minutes into overtime! 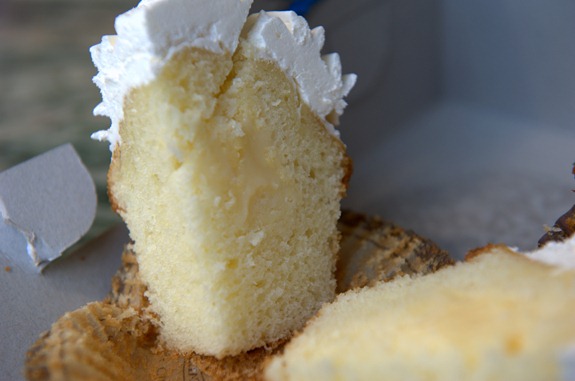 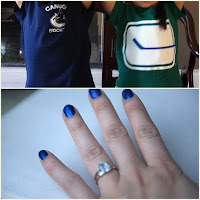 Whoohoo!
Go Canucks Go!
Here are the kiddies cheering in their Canucks gear.  I have Canucks colours on my fingernails and I'm in a blue t-shirt like Bebe too.  Bib has the retro shirt.  Cool, but I couldn't find one in my size!  We always wear our colours on game days.

Here are some pics I took with my iphone of the pastry counter and front display…it was crowded and the lineup was almost out the door, so I don’t have very good angles. You get the drift though…major yum factor! 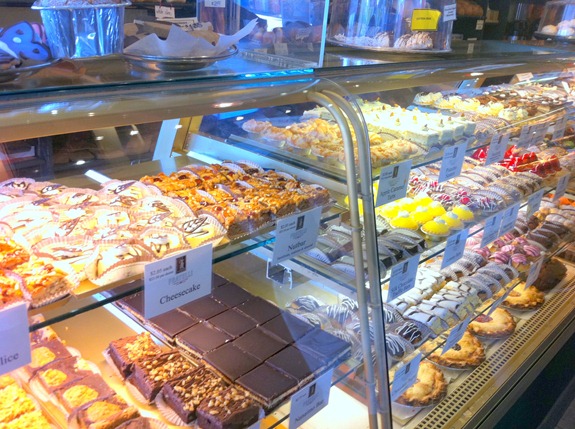 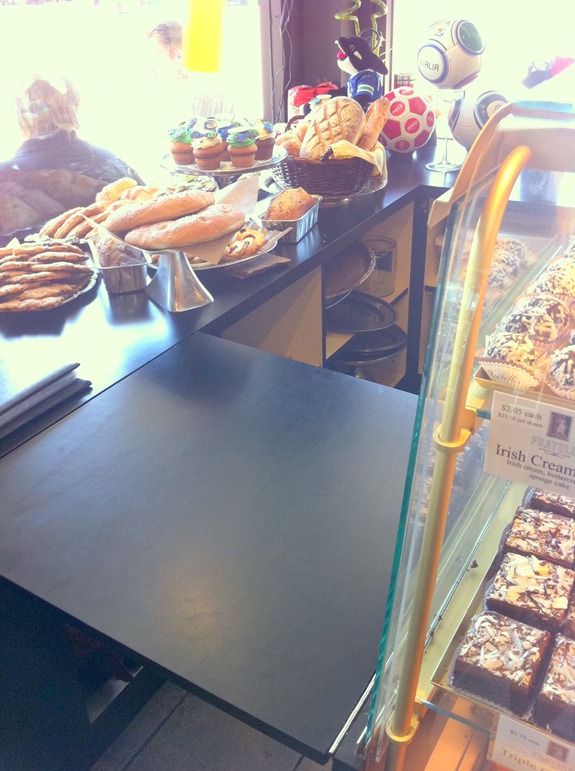 This is my attempt at a shot of the front display…not too successful.  However, you can see that outside there are a few tables you can sit at to enjoy your cup of espresso along with your pastry.  Beautiful when it’s sunny—as it was today. 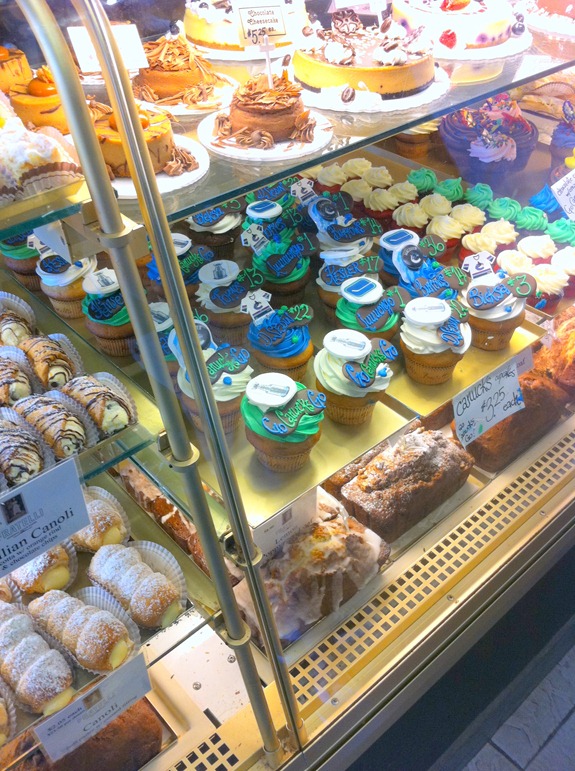 With Canoli, tarts, breads, lemon bars, St. Honore and other cakes, Fratelli has it going on with all its variety.  Several people were ordering large birthday cakes and the girl behind the counter told me many customers had come in just for the Canucks Cupcakes like me.   Several of the staff had Canucks jerseys on and I asked whether or not she’d be leaving work early to catch the game.  She shook her head and said that it would be a long day because they were preparing for Italian Day tomorrow.  The whole street is closed and becomes a pedestrian-only street.  I’ve been to these things before and know it would be fun; but I’m conflicted because the Children’s Festival is going on tomorrow too.  We’ll have to see. 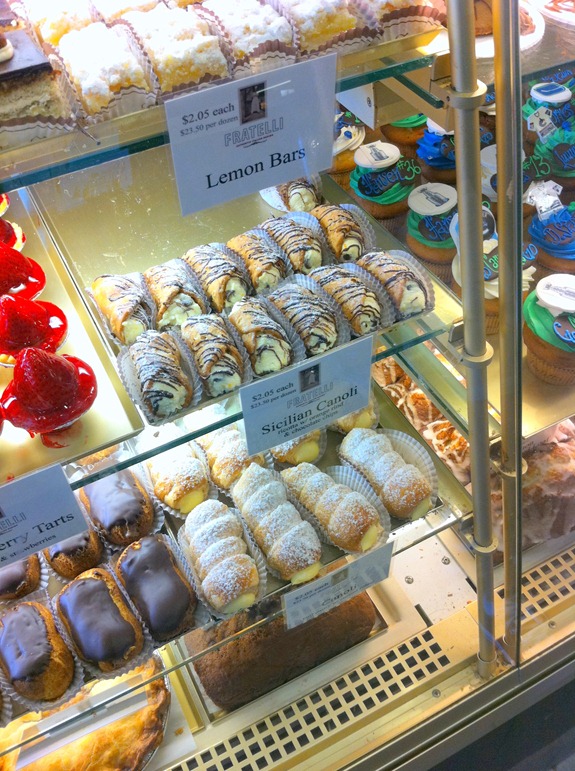 I’ll have to revisit Fratelli’s again and try some other goodies!  Everything looks absolutely amazing!

I wish we had cupcake shops like this where I live...although I would be in them all the time so perhaps it's best that we don't! lol!

i was gonna make canucks sugar cookies! ive never been big on hockey but i think my friends are really rubbing off on me now!

Last nights game was amazing! i barely settled into my seat for overtime when burrows got in the winning goal! it was 11 secs into overtime!!

That's a gorgeous cupcake. SUre wish I had bakeries like that around here!

hey better pull themselves together tonight and not crumble under the pressure again :(

oo, what a pretty bakery and cupcake! haha i love how much you love the canucks...

Dear Cakebrain,
I came across your blog a couple of years ago and I have been following ever since. Your cake and food pictures, blog and restaurant critique gives me a connection back to Vancouver. I live in the States now but I visit my parents in Vancouver once a year and I look forward to the food. We attended the same high school because in the 80's the Canucks practised at the ice-rink and during Chemistry class we all rushed to the window when we saw them leaving. I graduated in '84. I love Fratelli's bakery as well. I bought my brother's birthday cake last year and it was delicious. Thanks for blogging about food!

Oh Moggie!
So great to talk to an alumni...you graduated a year before me! It's good to connect! Wonder if we had any classes together? Accounting12 class with Mr. McCracken? Law12 with Mr. Rapanos? (I took these when I was in grade 11) ha ha! those were the good ol' days...Thanks for commenting and following me! makes my day!