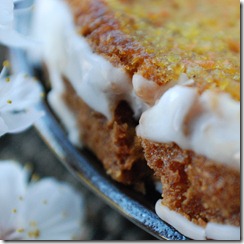 We may not be  swimming in gold medals, but the Games aren’t over yet.  Today I watched Women’s Ski Cross and was elated to see Canadian McIvor win gold.  It was a race with a lot of upsets and wipe-outs.  It was  very enjoyable to watch. 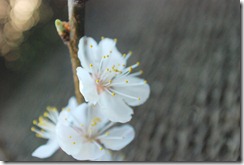 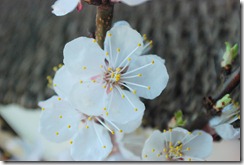 I’ve been soaking up the Olympic spirit recently and have thus been absent from posting, but I’m having too much fun to be worrying about  keeping up with posts (sorry, y’all).  Going downtown and everywhere else by our rapid transit system isn’t so bad.  We even walked all the way down to Granville Island from our house on Sunday because it was so sunny.
As you can see, the cherry blossoms are out and though it doesn’t bode well to not have snow as a Winter venue, it sure is lovely for the tourists walking about downtown and in the long queues.  I think there’s practically a line-up for everything.   There’s so much free stuff to do, but of course some of the waits are too much for us to even attempt with a 3 year old and a 6 year old. 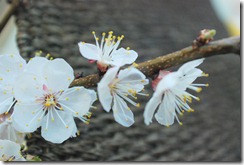 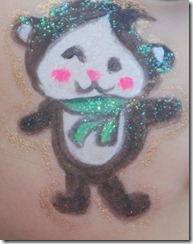 The line-up for face painting at Granville Island was about an hour.  Bib had Miga, 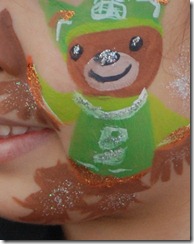 the Olympic mascot painted on her face while Bebe had Sumi on her face.  They thought it was worth the wait. 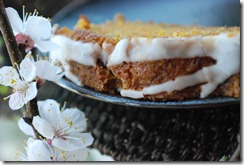 We saw on Sunday, the now Olympic Gold champions Scott Moir and Tessa Virtue perform their Original Dance.  They were so graceful, poised and athletic.  It just makes you so proud to be a Canadian! yay Canada!  Prior to that, we also saw Norway squashed 8-0 by Canada in the preliminary game and haven’t been disappointed by the patriotic and amazing atmosphere everywhere.  Everywhere you go, you see people with something Canadian on them:  Olympic mittens, scarves,  Canadian hoodies, jackets and red clothing; maple leaf tattoos and it goes on and on.  It’s so neat to see us ordinarily innocuous Canadians display such overt patriotism. 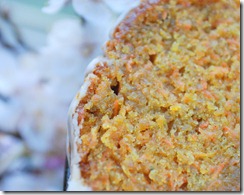 Since I’m so pressed for time because of going to all these cool events and milking all the free (actually I pay my taxes, so maybe not so free) Olympic activities, I’ve made a carrot cake which is speedy to make and will be speedily eaten.  It’s moist and it’s healthy; with an Olympian portion of additional fibre.  Though of course, you wouldn’t think it’s healthy because the healthy part’s hidden.  And I’ve further embellished it with a vanilla icing drizzle. 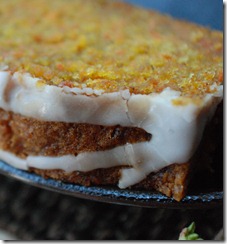 Look, it’s the “crusties”.  Apparently, according to my Crusties Poll on the sidebar, people overwhelmingly LOVE the Crusties. 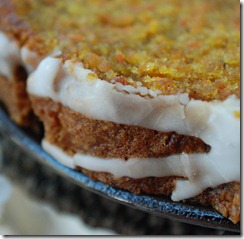 Lovely cake! I've been missing most of the Winter Olympics, as the coverage isn't terribly good here unfortunately.

Ha ha! Maybe you ought to give the olympians some of this gorgeous cake to ensure their enthusiasm ;)

What a lovely cake. What could be more appropriate than a "golden" cake for the Olympics? Thanks so much for sharing it with us. I have really enjoyed visiting your blog. I'll be back often. Have a lovely day.

Zurin,
The face painting rubs off so easily, unfortunately!
Vanilla,
thanks, I hope you make it!
Y,
Well, the Olympics is all us Vancouverites have on the brain right now! We have excellent coverage. Hope you catch some highlights!
Mark,
I think that is a capital idea, but I don't think my cake would get past security!
Mary,
So far, so good...crossing my fingers!

Do you think I could double the recipe and make it in a bundt pan? Looks so good!

Hi Heather,
I don't see why not! I do that sort of stuff all the time. Go for it! I would imagine you'd have to keep an eye on it to check for doneness, but it should turn out really well!

Go Team Canada! I can totally understand your getting caught up in the Olympic spirit! What a wonderful tribute to the Olympics too - that cake looks amazing!

Ooooh wow this looks good!! I'm not too big of a fan of carrot cake but this looks delicious.

Recipe is printed and ready to bake! Thanks for sharing this - it looks delicious and healthy!
Wasn't that just an amazing 17 days! Like you we spent some time downtown and really enjoyed the enthusiasm of the crowds! I'll always remember how wonderful the 2010 Vancouver Olympics was!

Trissa,
I am thinking it a coincidence that Canada came out with the most gold? hmmm...
Natalie,
Ordinarily, I don't eat carrot cake because of the nuts or raisins in it. So there's no nuts or raisins in this one!
Michelle,
It's not over until the Paralympics are over! I'm going to watch those too! yay Canada!

We love us some carrot cake and are always on the hunt for new recipes. This one was our favorite.

Yummy carrot cake loaf! Carrot cake is very classic and popular. We love to have it all the time.

wow, it really looks delicious, cant wait to try it, cheers from london

ohhh yumm! i have to try this! lovely blog by the way! :)

I absolutely LOVE carrot cake! And my mom makes the best one! I must do a post on it someday! All hail the Crusties!