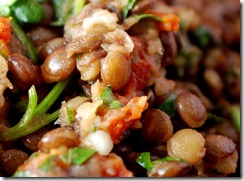 What might I be up to these days?  Wondering if I still have “Cake on the Brain?”

Of course.  I always think about cake and have been feeling quite remorseful for not having posted anything about sweets in a while.   Don’t worry, I’ll get back to it soon.

If you just want to get to the lentil salad recipe, just click on down to the bottom of the post because I’ll be catching you up with what I’ve been doing.

Recently, I have been reading Omnivore’s Dilemma by Michael Pollan.  I am almost finished reading.  I’m now beginning to wonder what percentage of my body is corn.  I don’t think I’ll be hunting my own food or trying to raise chickens in my backyard (although that is something Vancouverites now can do).  I am even more conscious of what I pick up at Whole Foods.  I used to think they were like a filter for all the stuff I shouldn’t be putting into my body.  But that is a crazy sort of way of thinking, isn’t it?  They can’t be my guardian.  That would be too easy.  I used to think that I could just trustingly grab whatever and stuff it into my cart.  However, after reading Pollan’s book, I’ve been scrutinizing signage and packaging more carefully.  My eyes widened recently when I tried to purchase strawberries at Whole Foods.  I grabbed a box of strawberries, thinking they were organic.  Then I noticed out of the corner of my eye another section of strawberries for sale produced by the same company.  They were more expensive.  The price was in large print.  The word “conventional” was under the price of the strawberries I had grabbed.  The more expensive strawberries had “organic” written under its price.  Gosh.  I frowned and put back the conventional ones.  I picked up a box of the organic ones and noted they looked almost identical.  They did smell good though.  The same company produced “conventional” and “organic” strawberries.  Go figure.

Though you won’t find me growing my own ingredients for cakes and desserts,  and I don’t think I’ll become vegan (I can’t imagine life without butter and eggs), I do my best to shop and eat healthy.  These are some of the things I’ve done in my life thus far:  I have a regularly scheduled Organic Grocery bin arrive bi-weekly at my doorstep from SPUD. 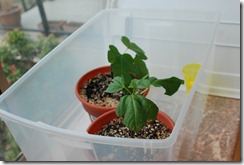 I have been trying to grow my own veggies and I’m working on growing FIGS!  Remember how I started propagating some last year?  Well, here’s a recent picture of how they’re doing.  I’m planning on bringing them outside soon…when I think they won’t catch a cold!  I’m so proud of myself!  They didn’t die over the winter! yay!  Some have even started sprouting more leaves!  In the picture above  you can see how they’re ready to bust out of the plastic bin I have been keeping them in.  The lid goes back on at night to keep them warm. 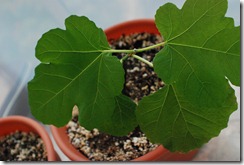 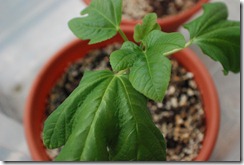 I also have purchased my own Gaggia Titanium espresso machine.  How’s that saving the world?  Well, I’m not driving to a Starbucks.  I’m not using their disposable cups and I’m buying locally roasted coffee beans.  I highly recommend Caffe Artigiano’s beans.  Lovely.  Stomach loves Illy espresso beans.  We switch between Illy and locally roasted beans.  I’ve been drinking cappuccinos twice a day lately (they’re way good).  The espresso has perfect crema and the coffee tastes way better than anything you can get at Starbucks.  I’m working on my latte art but I don’t think it’s possible to create the necessary “microfoam” without using whole fat milk on my machine and I don’t feel like having full milk twice a day.  It’s too much.   I purchased my superautomatic espresso machine at Espressotec located in Richmond.  Great prices.  Great service.  I also liked the servicing (twice; under warranty!) I received at Saeco, on Boundary Road.  Nice shop.  I had a “ventilate” issue after the first week.  Twice.  yah.  Italian espresso machines…kind of like cars…they need to visit the shop a lot.  But it’s all fine now. I’m in love with my Titanium now and baby it.

Last week, I attended a very interesting and thoroughly enjoyable Raw Food “Cooking Class” run by a lovely lady named Janice at the Raw Food Foundation.  It was eye-opening and I was amazed at what she did with a dehydrator and a Vitamix blender.  She made some fantastic Thai food (this was the class I chose to take with my friend) that was all RAW and I was actually quite satiated on many levels.   The cooking class venue was zen-like:  there was soft music that you could practice yoga to playing in the background; there were little candles lit throughout the condo-turned-cooking-school; Buddhas and Thai decor dotted the room.  The view of downtown Vancouver through the windows was breathtaking,  and the table was set beautifully.  We each received copies of the recipes she demonstrated and ate them after she demonstrated each of them.  Plating was beautiful too.  Janice was informative, enthusiastic and a pleasure to watch.  I have a feeling Food TV will be calling her.

Though I don’t think I’ll be turning RAW on you any time soon (though I’m a strong advocate for raw cookie dough), I’d like to share a recipe I developed that’s been inspired by my musings as a result of reading Omnivore’s Dilemma.  It’s a lentil salad.   It’s satisfying and savoury and lemony.   It’s even colourful if you add some halved organic grape tomatoes (which I always do) and even better if you flick some crumbled feta on top.  If you’re a pescatarian, serve it with grilled wild salmon and some organic mâche (my currently most favourite baby green) drizzled with extra virgin olive oil and freshly squeezed lemon.  That was my dinner tonight.  It was heavenly. I love it for lunch in my bento too.  It keeps well. 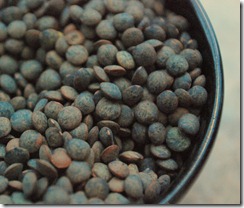 You must use organic Puy lentils.  They are greenish-brown in colour and look like beautiful little discs.  If you use red or yellow lentils, you’ll just get a big mush—not so pretty.   The French Puy lentil will keep its shape in the salad after you have cooked them. 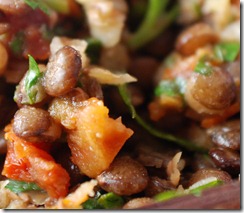 I’m so proud that I made up this recipe on my own and it tastes way better than the stuff you buy at the Whole Foods deli.  More importantly, it’s way cheaper!   It’s so good and even better if you let it sit in the fridge a couple of days to absorb all the flavours. THE SOLUTION TO THE OMNIVORE’S DILEMMA:  LENTIL SALAD 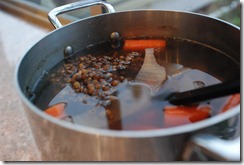 Interesting post! The salad look great. I ll be surely trying it soon. :) thanks for sharing

That looks interesting and very healthy!!!

it reminds me of a greek food my mom makes! i'm sure it's yum!

I'm also eating more consciously these days and thanks for the inspiration. The salad looks lovely!

it look very fantastic...ı will be trying it soon...faitfully

For some reason when you said omnivore dilemma lentil salad I thought it would be lentil salad with, like, everything on it, hahaha :) And raw cookie dough! Yes!!
Kudos to more conscientious buying. (And self-produced coffee, yay!) I hope the rewards in flavor are reaped.

Snooky,
I hope you try it--it's yummy!
Zurin,
It sure is healthy but doesn't taste healthy!
Tiffany,
I do love Greek flavours and this probably is close to what your mom makes!
Sweet Kitchen,
I'm so glad you eat consciously too...it'll be so much better for you!
Bake a Cake,
thanks for commenting! love your blog too, but too bad I can't read it!
Mark,
I had to refrain myself from adding my usual protein to my salad (I'm am a true omnivore!) ;P

Wow, seems to be so healthy! I really like your blog... i'm horrible at cooking, but well, i sometimes try to do it :P
XOXO! ♥

Hey Chloe,
thanks for sending the love! I know, it seems to be healthy and I'm sure it is. However, it sure isn't diet food. I gain weight like crazy eating lentils. I have to consider it an occasional treat from now on. I guess it's calorie dense and full of carbs (though relatively good carbs).

Mmmmm this looks healthy and DELICIOUS!! Thanks for sharing an awesome recipe..I can't wait to make this one myself. :)

Good timing! I think I'm going to make this as lunch for this week. Thanks!

ps - loved Omnivore's Dilemma. Have you read "In Defense of Food"?

Katina,
well, as a matter of fact, that's next on my list! thanks for reminding me about that!