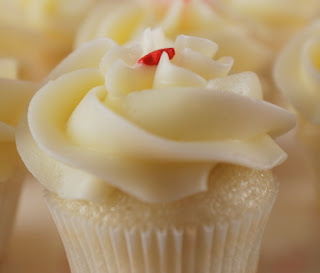 Today the Olympic torch came through our neighbourhood.  My daughter’s elementary school was out in full force to watch the torch as it went through the neighbourhood. 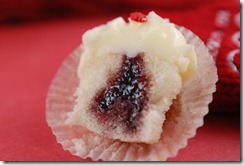 The mini cupcakes I made kind of look like the Olympic torch.  They’re moist white cake with a white simple buttercream swirl and decorated with a tiny maple leaf on top.

Just like Canadians, these cupcakes may be unassuming outside, but inside, there’s something sweet and exciting!

I managed to squish into the mini cupcakes as much seedless raspberry jam as they would take before exploding.  I used a special tip I bought that is designed specifically for piping fillings into goodies.  It’s a  230 Wilton tip.  You can’t see the jam from outside. When you take a bite, the cross-section shows you the jam and it looks like a flame too! 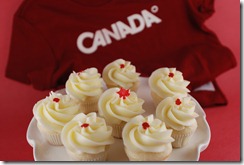 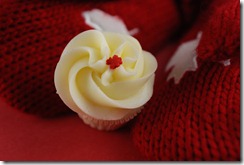 Bebe was among the Vancouver Grade One students across the city who received a free pair of red Olympic mittens.  I went to the Bay and bought another pair for Bib.  The mittens were everywhere you looked at the Bay! and they’re only $10!
We’ve got event tickets:  prelim Hockey—Canada vs. Norway, speed skating and figure skating.  The girls are pumped and the whole family will be dressed in red.  I’ll plaster maple leaf tattoos on their faces.   This is a once in a lifetime event for our family.  We’ll never see another Olympics in our lifetime and we decided we’d make the best of it and see as much as we can. 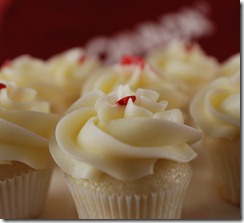 Being born in Vancouver, and having travelled around the world, I realize how lucky we are to live where we do.  The climate is mild and there are so many outdoor activities and things to do.   Sure, other places are beautiful too or cosmopolitan, but we seem to have it all:  great food, natural beauty, a multicultural community, a hip urban scene and opportunities to play in the water, hike up the mountains, ski in the snow and bike or walk along our many trails on land…all in the same day sometimes!   So every time I get off the plane from a trip, I give a sigh of relief.  It is definitely home and there’s no other place I’d like to live and raise my family.

Students have on occasion asked me where I’m from.  This is a common question in multicultural Vancouver because it is a city teeming with immigrants.    My answer always, is that I’m Canadian (through and through.)  I was born here, I was educated here and my values are distinctly formed as Canadian.  I am not ashamed to call myself Canadian and I don’t even bother to hyphenate myself like so many other people I know:  Chinese-Canadian, Italian-Canadian, Indo-Canadian, German-Canadian.  I am simply Canadian.  I’m not turning my back on my heritage, but Canadian is what I am.  We’re all immigrants except for the First Nations people and Inuit.  The question should not be “Where are you from?” but “How long has your family been in Canada?”  I see my identity as Canadian first. 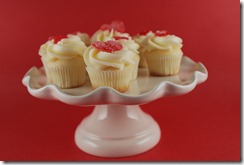 If you can’t get out to the events, there’s still an opportunity to celebrate the Olympic spirit as you’re cheering your team on.  Just make these easy-peasy cupcakes and your family and friends will be cheering for you.

Am loving how you compared cupcakes to Canadians! Good luck with the Olympics - must be soooo exciting.

Great looking Canadian torch cupcake!! This goes really well partnered with espresso coffee Thank you for sharing this recipe and post with us. I have been looking for a torch cupcake design and I was really lucky to come across your blog. Great posts!

these are lovely, they really look impressive and delicious, chers from london

Ah wow these look so good. It must be great having the Olympics where you are!!

Never say never L! Even if the next Olympics aren't in Vancouver, you may still see them :) I love the flavors here - I'm a sucker for raspberries!

Such delicate and beautiful cupcakes and when you cut it open theres the flame!!! brilliant!(^^)

We are in NY and love hockey and the Olympics so we're a bit jealous of you Canadians right now! Cupcakes look delicious!

Found ur fantastic blog via the comment u made on the Panda cookies-what u say is so true and did ya find a way to make 'em.....they are absolutely so so so so dang cute dear....very....

That said am so happy i hopped by here coz u have an absolutely fantastic blog am jus loving strolling thru ur every post.....

Trissa,
It is SO exciting! Everyone I meet has a "Canada" shirt or scarf or they're wearing red!
Mike,
I just purchased a Titanium and have been enjoying espresso, thank you!
Pity,
Can't go wrong with butter!
Natalie,
We're having Olympic fun!
Mark,
No way, it's way too expensive to go to any other Olympics. The travel/hotel cost will kill you and then the tickets to the event. yikes.
Zurin,
I love the raspberry filling!
Heather,
Well, we may be jealous of your cooler weather as we need some snow on younder mountains!
Vanilla,
thanks for visiting and Happy Belated Valentine's!

Thanks for your showing your Canadian spirit!!! It certainly is so much fun these past few days here in Vancouver! Canada Rocks!

How exciting the torch came through your home town! The cupcakes are adorable!

I love it!!! Those are the cutest cupcakes!

These Vanilla cupcakes are AMAZING!!!! Thank you so much for posting this recipe :)
What's your most favorite chocolate cupcake recipe? Or have you ever converted this recipe to include chocolate?

CookingCreations4U,
thank you for saying such nice things :)
Actually, the most popular post I notice people visiting on my blog is actually for my favourite chocolate cupcake recipe. It is the best I've made so far. I have two favourite recipes for different occasions. Try
best chocolate cupcakes
and look in my "recipes" tab for the Barefoot Contessa chocolate cake/cupcakes and other tested recipes too. They're mighty fine too.