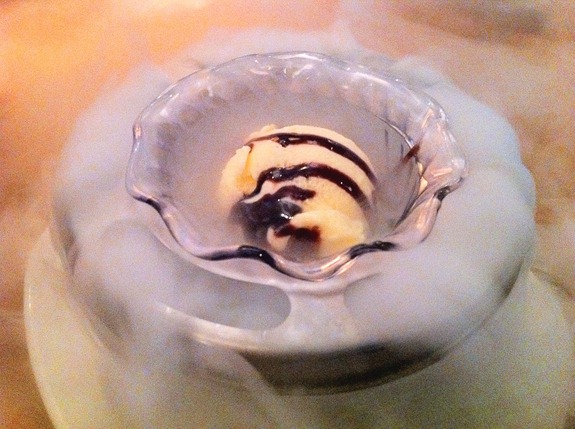 Moxie’s has a decent kiddie menu and it comes with this dramatic presentation for the kid’s dessert.  It’s simply ice cream with chocolate sauce, but it’s served in a special bowl with a liner.  The outer bowl houses small chunks of dry ice.  The waitress bring it to the table and then pours in water through the openings at the top.  “Smoke” then comes billowing out; covering the surface of the table and eliciting oohs and aahs from the kids and the patrons from nearby tables. 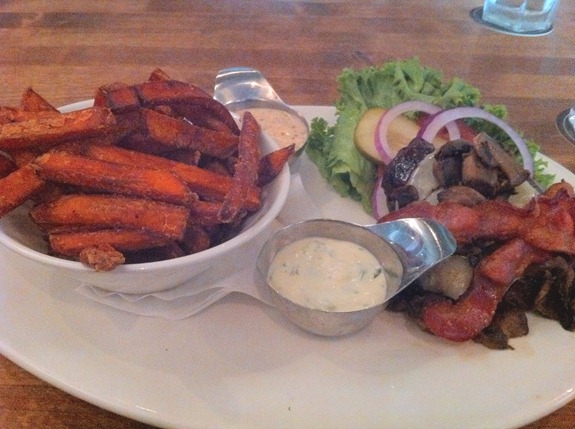 I know.  A burger without a bun doesn’t seem right.  However, going GF doesn’t mean I should go without burgers.  I had my sweet potato fries so the bun would have been extra carbs I didn’t need anyway.  The mustard dip came alongside in a little bowl.  I just dipped bites in there and it was all good.  The meat was exceptionally good.  I don’t recall the burgers being so tasty from previous visits.  In fact, at a different location…the Moxie’s on W. Broadway (now closed…gee I wonder why?), we were not so impressed with the quality of the food and hadn’t gone back.  At the Richmond location, we have had some decent food and haven’t been disappointed yet.

The sweet potato fries were crispy and yummy with the basil mayo dip.   I so hate soggy fries and these were not wilting. I must admit that I was a little disappointed when Stomach’s prawns came out.  They looked on the burnt side.  However, he really liked it and said it wasn’t over-cooked or dry at all.  I guess it was just the seasoning in the crab crust that made it look so un-photogenic. 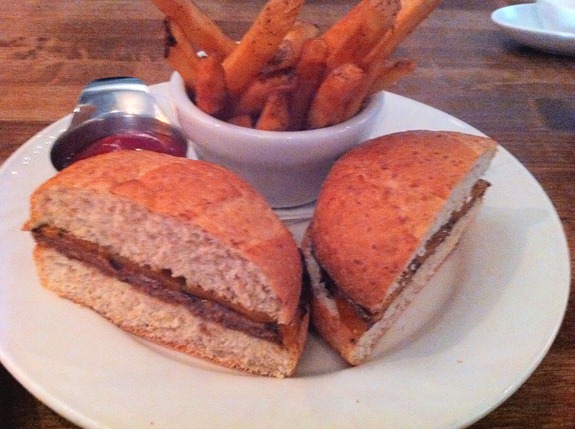 Bebe has finally reached the age where she is beginning to appreciate burgers.  She had hers with cheese.  The fries were good too. 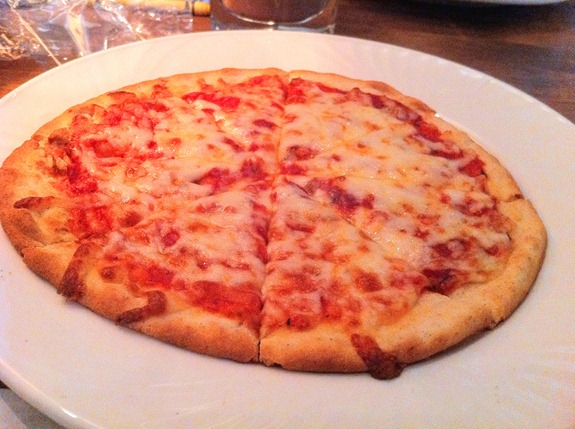 Cheese pizza (kid’s meal).  Bib still doesn’t do burgers; however fortunately they have cheese pizza.  She likes this choice better.  The kiddie meals come with a choice of drink (juice, milk or pop) and dessert.

Moxie’s provides a 3-pack of crayons and paper placemats with puzzles and games for the kids.  That gets my thumbs up.  I hate bringing stuff for their entertainment and sometimes I forget. 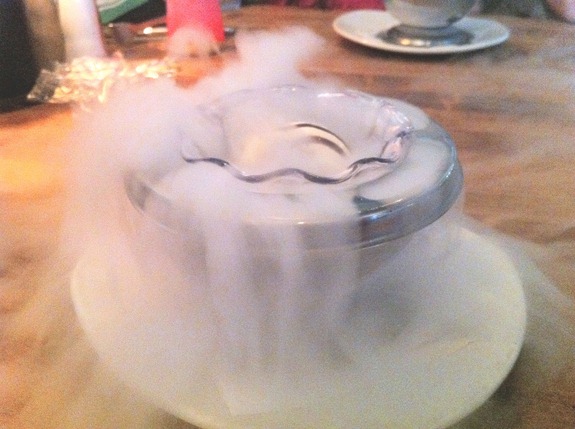 I would say the kids’ dessert was the highlight of the meal because of the drama.

I would say that whoever thought out thoroughly the needs of patron's children at Moxie's, knew what they were doing (unlike Cactus Club.  Boo.)   Entertaining and pleasing kids means that the parents enjoy their meal all that more.  You don't get whining over food that isn't so kid-friendly and they behave themselves all that much better when they have something to do.  Though I generally bring entertainment for them and they don't run amok in restaurants, I can see how some parents and kids may create a crazy messy situation at a restaurant; destroying other diners' atmosphere and experience.  If that ever happens to us, we'd be mortified and we'd carry them out of the restaurant immediately.  However, our kiddies have been trained at an early age to eat out and this rarely happens.  When it does, it's out on the sidewalk quickly before a tantrum is thrown and things become unmanageable.  The key is cutting them off before it builds up to that point though. You can't be lazy and just sit there when you see all the signs building up that they're going to have a fit.  Then you must follow through consistently.  Park them outside and let them have their cry.  Tell them they don't get to go back in until they behave appropriately in a restaurant.  If they can't, they stay outside.  That's life.  We never have gotten to that point.  Generally, it only takes less than 5 minutes.  Especially if it's winter in Vancouver and we didn't put a coat on them!  This type of time-out cools them down real fast!  We've only had to do this on 3 occasions between the both of them, but this happened early on in their foodie lives and they quickly learn that you mean business.

Overall, Moxie's service was attentive, the food is consistently good, the washrooms clean and chic, the atmosphere was casual and you know…pretty young women and tall handsome men in tight black uniforms waiting tables…

A tall blonde hostess opened the door for us with a smile when we approached the restaurant and greeted us.  Upon leaving after our meal, again she opened the door for us and Stomach commented that he wasn’t used to having a woman open a door for him first.   She replied that that’s how they do it around here at Moxie’s!  We left happy.