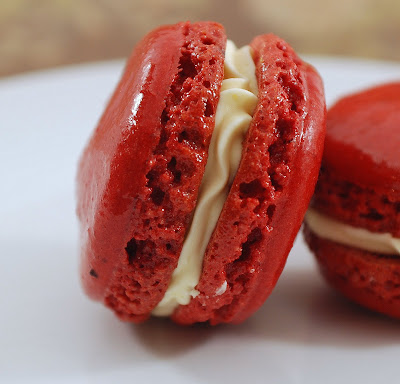 razzle-dazzleberry macarons: who doesn't love a surprise?
Imagine my surprise when Stomach actually pronounced my latest batch of raspberry macarons amazing. This is saying a lot from a man who doesn't seem to eat anything sweet willingly. 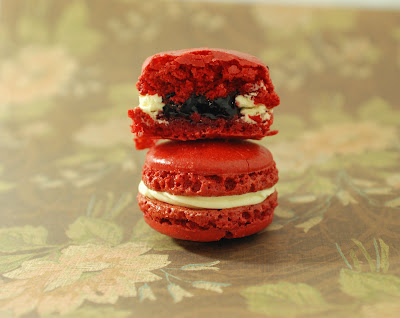 I zinged up my trusty ol' basic macaron batter with a couple of tablespoons of finely ground dehydrated raspberries and dumped (way too much) powdered red food colouring into it as well. The red colour of the macaron shells was so intense. They even left a faint red stain on our tongues! 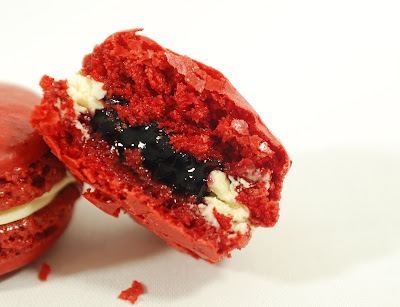 I piped a ring of Beranbaum's NeoClassic Buttercream (my desert/dessert island buttercream) along the macaron shell edge and then I piped a nice fat blob of seedless raspberry jam in the centre of the ring. After sandwiching two macaron shells to cover the filling, you couldn't tell that there was a secret explosion of raspberry filling inside. Bwah-ha-ha!
Check out my recipe below.

I woulnd't mind tongue stains just to eat those! They're gorgeous, love the color and the name!

I was just gonna say that they look so intensely red! But they do look absolutely perfect (I'm glad stomach liked them!). Thanks also for the NCBC recipe-- I am eager to try a buttercream recipe that doesn't taste like whipped butter :P

I love the contrast of white buttercream and dazzling red macaron.

Those look delicious - I love the vibrant color (even if it does leave a slight stain on your tongue!).

wow these look amazing. i wish to try macaroons some time surely they won t be gorgeous as yours.

I love that buttercream except I changed it up a bit over the past few months to suit or tastebuds but still feels like eating Breyer's vanilla ice cream!!
The macs turned out perfect!! I hear you about the food coloring...I played with one too recently and I think it turned out good but omg...I used almost a whole bottle for one batch!!

Wow, these are just about the most beautiful little cookies I've seen in a long time!! SO pretty. THey'd make nice, little Christmas treats :)

this looks stunning! a must try....enjoying your blog + creative posts!

The color is so vibrant and stunning! Love this!

These are seriously gorgeous! That color is amazing and dramatic! Love it.

These are gorgeous! I love the look of these...perfect for the holidays!

Those macaroons look wonderful! I'm not the biggest sweets guy myself but I'd love to give one of these a try.

Those look so vibrantly red and good!

These look amazing, I love the idea of jam in the center.

That is mighty gorgeous macarons! Yes the color is pretty intense, but I like it, it's beautiful color. I think it is perfect for christmas!
Cheers,
Elra

Thank you everyone for the comments!
Unfortunately, I've been having some problems with the blogger comments disappearing before I could publish them. If you don't see your comment published, it's not because I deleted them but because blogger zapped them into the etherworld and now I don't know how to get them back. I'm sorry I couldn't reply or visit you because I never really did get to see them long enough to catch who commented.

Is there a functional reason for using the buttercream frosting around the jam? I am not a fan *gasp* of buttercream...and am thinking of just using a raspberry jam as my filling. Although it does look comparatively more beautiful to have the buttercream....

Foodforthought,
Well, the functional reason for the buttercream is to hide the jam filling so that it is a "surprise" when you bite into it. If you don't like buttercream, just use jam. The wonderful thing about macarons is you can put anything between the two shells: ganache, fresh fruit, jam or jelly, curd, chocolate, buttercream or ice cream! Do whatever pleases you!

i followed your raspberry macarons recipe to the tee, after making a fairly successful chocolate batch via David Liebovitz and another slightly less successful almond with caramel de fleur du sel via A La Cuisine. The macarons following your methodology of leaving the rounds out before baking until the outside was not even a little tacky yielded by far the best foot on my cookies. I also think I became more skilled at knowing when to stop folding. For those reasons, these came out beautiful and I cannot wait to serve them to my guests this evening! Please check in on my blog in a few days to see some lovely pics! Thanks so much for posting!

Food, She Thought,
Yay! I love it when someone tells me they have had the same success with a recipe! I'm so glad your macarons had nice big feet :)!
The raspberry macarons are a show-stopper for most people who have never had one before. I too have experimented with tons of recipes and this is my standby. Most recipes don't tell you to touch the shells to test for tackiness...I just figured that out on my own. They usually give you a time-frame to leave it out but that doesn't take into account the humidity of various climates. So, I'm glad that little tip helped you too! You can play around with this recipe in so many ways! I'm looking forward to seeing your pics!

Ohh! These macarons look so delicious. I love your blog!!

I've been on a bit of a maracon hunt lately - I saw some delicious looking maracons on a TV show and found they sell them in London (which is quite far from me). But these look just as delicious so I shall have a go at making some :)

Thanks for sharing it!