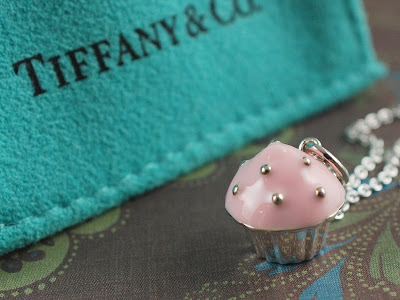 my birthday cupcake: it's not edible, but isn't it cute? 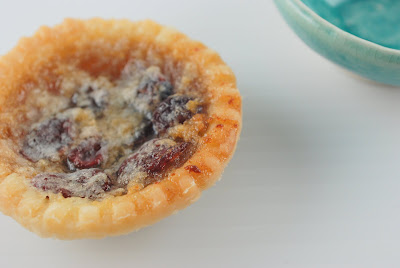 a canadian treat: cranberry butter tarts
It's my birthday and I'll buy if I want to...buy if I want to...
After I turned thirty, I decided that every birthday I should buy myself a birthday gift. Who knows me better than myself? I'd never have to exchange or return it and for sure I'd never be disappointed. I would never forget to buy myself something and of course, I would always know what I truly desired.

First, I'll tell you what Stomach and the kids got for me...
Stomach, being a thrifty sort of person, combined a business trip to Alberta (where you don't have to pay provincial sales tax! whoopee!) with a shopping spree. Actually, he drove downtown with a colleague and told him to circle the block a couple times as he'd only be 15 minutes. He had a list and knew exactly what he was going to get. Is that considered a spree? Well, not in my shopping world it isn't. He then proceeds to impatiently tap his finger on the counter as the one and only saleslady is busy showing two other men stuff in the showcase. How rude I thought as he recounted the story to me.
But guys will be guys. A guy with a list running to the Tiffany counter while his colleague circles the block is on a mission. Shopping to me is relaxing and I don't really set a time limit unless I'm parked on the street with a metre ticking away.
When Stomach got home, Bebe exclaimed that she and Bib had a gift for me. I looked surprised of course, as she presented me with the pretty blue box with the white satin ribbon bow. (Love those colours!) I asked if she broke her bank to buy this for me. She looked at me kind of like she forgot something and ran upstairs for a while. I heard her rummaging through her room and then the pounding of her little feet as she flew downstairs. She whispered something to Stomach and put something in his hand.
It was a loonie, a quarter and a penny from her piggy bank!
Stomach of course had to keep it because otherwise it wasn't really from her. 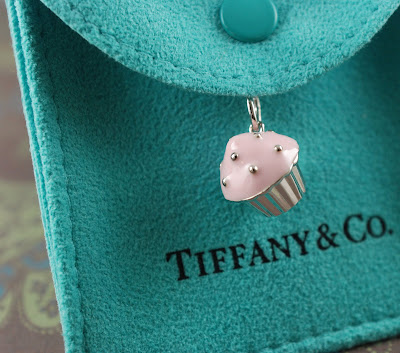 Bebe & Bib's gift to me
Well, I'm still buying myself gifts every year and this year I didn't disappoint. I decided that my blogging would be made much easier if I purchased those Lowel Ego lights that other food bloggers have been raving about. Jaden, at Steamy Kitchen, first introduced me to these lights and I was hemming and hawwing about whether or not to get them for the longest time.
Then, on one fortuitous night, I stood there with chocolate cupcake crumbs and buttercream frosting on my fingers, adjusting my wobbly make-shift "studio" lights that Stomach jerry-rigged from a pair of old black Ikea lights with exposed (eeks, bad-for-your-health-if-not- filtered!) new-fangled spiral, green, energy-saving doohickey bulbs. The bulbs gave off a white light and they were kind of close to what I wanted. The trouble was, they were blinding my eyes everytime I looked up as of course, they were not filtered by a shade (which wouldn't fit their odd shape anyway).
Every time I tried to adjust the angle of the bulbs, I got zapped because Stomach thought it a good idea to pull the bulb and socket out of the lamp and precariously rest it on the neck of the lamp base. This way, he surmised, I could adjust the angle of the bulb. Doh! I know, I know.
So, after getting zapped a few too many times, I resolved I'd buy these 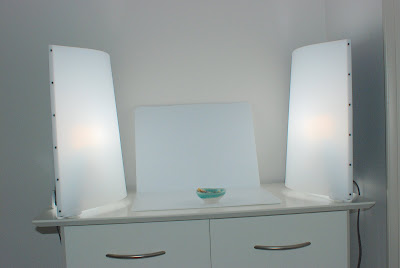 my food porn studio is in the basement so it's really dark. that's an old piece of ikea furniture that the lowel ego lights are on. the two lights came with a big sweep and coloured paper for backgrounds, but i haven't used those yet. and you can't see it, but my exercise bike, total gym and treadmill are in this dinky bedroom-sized room too!
So for my birthday, I got my lights...and my health, because now I know I won't get electrocuted.
I was born in Vancouver and from a very young age, I recall my mother coming home with packages of these butter tarts from the local Safeway. I didn't realize until recently that butter tarts are a totally Canadian sort of dessert; kind of like Nanaimo Bars.
Indeed, thumbing through my hundreds of cookbooks, you'd be hard-pressed to find a recipe for Butter Tarts. Funny, because you can find them everywhere. You can find them gussied up at higher-end pastry counters with rustic hand-formed tart shells or at the corner grocery store stacked in their half-dozen cardboard trays. I recently bought a few from Meinhardt's dessert counter and they were scrumptious.
Butter Tarts usually are made with pre-bought tart shells. It's all about the filling you see. They are dessert you can eat after school or bring to a staff social. They're cheap! They're sweet! They're easy to make!
Traditionally, Butter Tarts have raisins in them. Now, I must confess. I hate raisins. I hate raisins in bread and in carrot cake and in pretty much any dessert come to think of it. Don't get me wrong...I like to eat raisins by themselves. I just don't like raisins in things. It's a textural thing. I was probably, in my childhood traumatized by raisins, I'm sure. I know this has to be the case as I vividly remember being traumatized by peas. Yes, peas. Those evil little green spheres of ickiness.
I would come home for lunch in elementary school and there awaiting me would be a plate of fried rice that my mother made...with peas. I would eat the rice and other stuff but I'd leave the peas. One time, my mother got fed up with me and said that I couldn't leave the table until all the peas were finished.
Lucky for me we had a German Shepherd who didn't mind peas at all!
Today I have learned to love peas in fried rice. I'll even eat those frozen mixed veggies. The turning point for me came when I lived with my maternal grandmother during summer break one year and she made me an egg-drop soup with her freshly grown garden veggies. She incorporated some freshly shucked peas. It was heaven. I couldn't believe the sweet little explosions of flavour in my mouth were the same things that were invading my fried rice and macaroni and cheese. You heard it people! Mac and cheese with peas! Sacrilege! Hot dogs yes; ketchup, well--it's okay but I don't do it. But peas in Mac and Cheese? WTF?
So there, you can understand my reasons for not liking peas.
'Nuf said. Let's get to the Butter Tart recipe. Buy some frozen, unsweetened tart shells or make your own. All you need is about 15 minutes to make the filling and you pop them in the oven for another 15. You can throw in dried blueberries (which I did), craisins (which are my favourite), raisins (if you're traditional) or any other dried fruit. You can also leave the dried fruit out and put in toasted nuts (think pecans!) or even nothing at all! This is a forgiving recipe.
I found this published in The Vancouver Sun. They had this retro series where they published all the oldies. 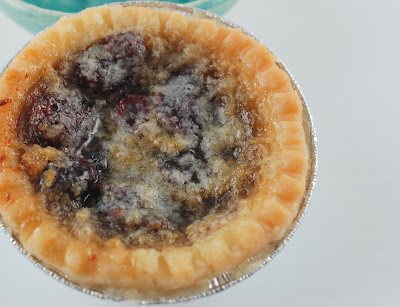 THE BEST BUTTER TARTS (adapted from The Vancouver Sun)

Ha I really enjoyed reading your post :) I like peas though not with mac and cheese :) the cupcake from tiffany is really cute. The butter tarts looks so so good. I m going to try them

I love the Tiffany Cupcake! I didn't even think to look there for Cupcake charms! It's adorable!

Hi cakebrain. Happy belated birthday. What a lovely idea to get a gift for yourself at your birthday. I wish I had thought of that but it's never late, those lights are definitely something I need as well. The cupcakes sound delicious and that gift from bebe is adorable.

HAPPY BIRTHDAY!!! Nice jewelry-- very fitting ;)
I guess I'm not much of a guy since I like shopping too :( But I'm in between-- I know what I want to buy but I leave room for buying crap, especially when you talk about the baking tools aisle! Whee!
Aw, I like raisins :) But making the tarts with craisins and dried blueberries sounds like a great personalized touch!

I'm ordering my Lowell EGO lights for Christmas. I'm not certain about getting two, space is limited. Love your "studio"!

I'm with you sista, raisins, YUCK! I don't like them at all! As for peas, I'm not down with them at all!

Thank you all for the birthday wishes! I had a lovely bouillabaise for dinner and now that I think of it, I haven't had a birthday cake, so now I'm going to have to make something for myself!

Mark,
You are what we call in North America a "Metrosexual" man...a guy who takes care of his looks and is still manly (i.e. George Clooney etc.) I'm with you in the baking aisle!

Happy belated birthday!!!!! You did good by buying yourself a birthday present! It's so adorable, you totally deserve it!!! Beautiful tarts!

Happy Birthday!!!! Such lovely presents too. Both are just the kind of thing a food obsessed blogger would want ;)

hi
liked you butter tarts and macarons..creations have nice visual appeal and delight.

The little cupcake is super cute and the tarts look wonderful!

Happy belated birthday! Love your little cupcake, your little namesake. And those tarts look so freaking good! I had a good cuppa while I enjoyed reading your post!