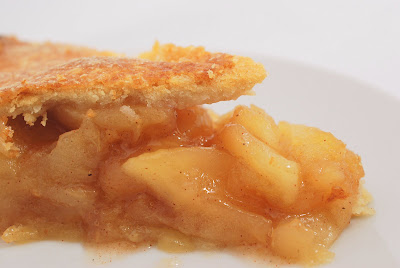 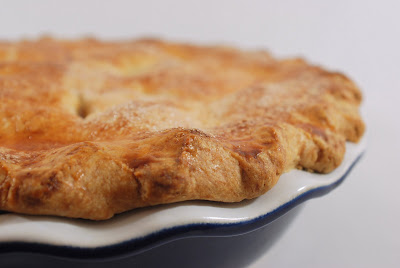 this crust was easy to work with, but I'm looking for something even better!

I love apple pie and I'm still searching for the best flaky, tender, flavourful crust. The most recent recipe I tried (Barefoot Contessa) incorporated butter and shortening but I wasn't that impressed by the flavour (not buttery enough!) and the flakiness was somewhat lacking. It was okay. Not bad but not worthy enough for me to post. 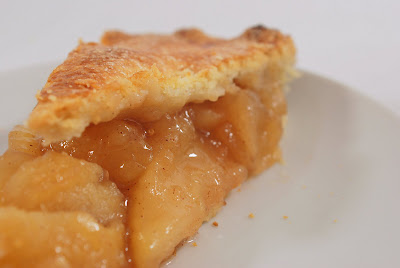 A technique I did fiddle with was precooking the apple pie filling. I hate it when the crust sets up high and the filling shrinks down low in some recipes. You're left with this huge void in between the top crust and the filling. From research, I have found that in some recipes that the filling can be cooked ahead of time and then popped into the unbaked pie crust to be baked again. This seemed intriguing.

My mother had purchased 4 lbs of local organic Fuji apples at the annual Apple Festival at UBC. Precooking the apples on the stovetop totally worked out for me and I was happy with the consistency of my apples. Whereas previously with some recipes, I'd have about 3 cups of apple juice pooling around the bottom of a soggy crust, now I had a nice dry crust and a filling that held up when sliced. It wasn't all cornstarchy either. I was worried that the filling would overcook, but it hadn't done that at all. 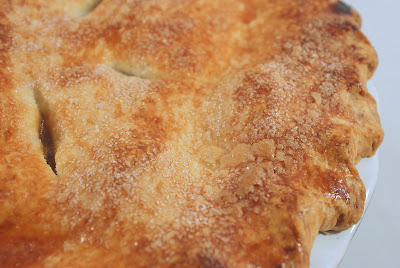 Now, I just have to fix the crust problem! I realize the shortening is there to help alleviate the sunken filling syndrome, and it also helps with tenderizing, but I could really tell the shortening was there. I wasn't so impressed with the flavour. I have yet to try ATK's vodka instead of water technique. Perhaps it'll be my next crust to make.

Anyone out there have the best darned pie crust recipe?

yummy your apple pie looks so so good.Wish I had some perhaps with somme whipped cream :) I ll try cooking the filling before the actual pie next time . Think it will be better :)

The flavor of Fuji apples is just divine. I prefer it much more to GS, and I think it cooks a lot better too. Have yet to try baking with it, though. The pie looks excellent- sorry about the shortening flavor. Isn't there butter-flavored shortening around? How about a cream-cheese pie crust? I heard those are good.

This is nice i can see it in my plate with a scoopo of vanilla ice-cream o whipped cream !!

I also like to precook my filling when making apple pie. Your crust looks great to me! In fact, it's a beautiful pie I think!

I love fuji apples, they are my favorite!! The pie looks fabulous!

I've heard that CI has one that they (of course) claim to be the best. Haven't tried it myself.

The pie looks amazing and so does the crust - sorry it had a shortening flavor. Great photos.

That looks pretty darn good to me! I've never used vodka in a pastry before. Would love to know how that turns out for you! As for other recipes, I quite like using Rose Levy Berenbaums' cream cheese pastry recipe sometimes.

hi
i missed a lot of your creative works...starting from mini chocolate pumpkin to yummy chiffon cake to wondeful illustrations of chocolate rose to cupcake to the apple pie..lot of catching up to do..they are good, absolutely stunning and beautiful posts...wow was the word i was looking for !

This looks so good, beautiful pictures!

That apple pie looks great! I still haven't mastered pie crusts yet either.

It's funny that cooking apple pie filling is not the norm. Growing up, my mom always cooked apple pie filling, so that's how I always thought it was done. She would cut the apples into chunks, and cook them down with sugar and cinnamon.

A combo of butter and lard will give a buttery, yet flaky crust, although I prefer all-butter crusts. By using lard, you avoid the trans fat and oily mouth-feel of shortening. One trick I read about (though haven't tried) to prevent shrinking is to place another pie plate (preferably glass because it's heavy) on top of the crust, and pre-bake upside down in the oven. Apparently, the force of gravity will prevent shrunk crusts.

You should try the crust recipe in the Martha Stewart Baking Handbook. It's all butter. I have received nothing but great reviews from family and friends. For one 9-inch round, 1 1/4 cup flour, 1 stick of butter (or 8 tbsp of butter and 2 tbsp lard) and ice water to form. I still haven't mastered the perfect rolling temperature - still learning.

Mr. K.D.,
I'll put it on my list of recipes to try! I know I have it somewhere! thanks for visiting!
Palidor,
I'll keep that tip in mind...thanks!