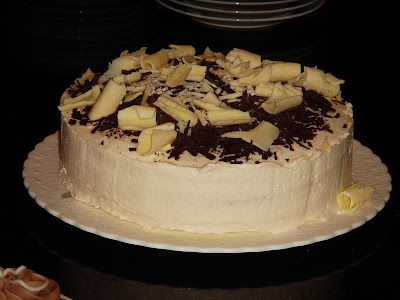 greenspan's black and white chocolate cake: let's say it had potential but came short in delivery. i had to decorate with tons of white and dark chocolate shavings to distract people from the ugly sides of the cake 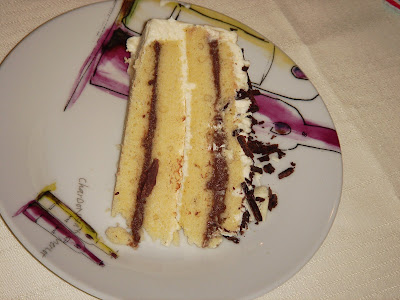 I am disappointed with this particular recipe from Greenspan's Baking: From My Home to Yours. Everything else I have made by Greenspan has been so spectacular and yummy. Her cookie recipes were foolproof and delicious.
Let's just say yesterday was one of my more challenging days as an amateur baker. With the white chocolate mousse component curdling on me 3 times, I thought that I was going to ditch the component and replace it with my favourite white chocolate mousseline buttercream recipe. However, I persevered and stuck with Greenspan's recipe just so I could give it an honest chance. 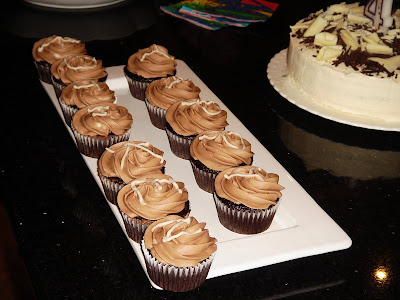 In the end, I don't think my perseverence was rewarded well enough. The flavour was okay but the appearance of the cake was not that impressive. Because of the softness of the white chocolate cream, it was almost impossible to frost the cake properly. Greenspan's illustration of the cake clearly indicated gorgeous even layers of thin cake and dark and white chocolate mousse. In my rendition of the cake I followed the recipe to the letter and it certainly didn't have the "wow" factor that the cookbook's illustration had. 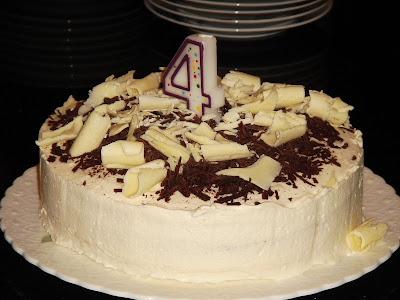 A problem I discovered upon serving the cake was that the weight of the layers compressed the mousses so that they squished out the side of the cake, making the layers of mousse thinner than desired. This I hadn't expected. I also had to keep the cake quite cold or it would melt. This meant that the cake layers were not as good texturally. The cake component was okay; nothing comparable in flavour or texture to the cakes I've made from the Cake Bible by Rose Levy Beranbaum. It was more dense than I would have liked, bordering on almost dry (but not quite). 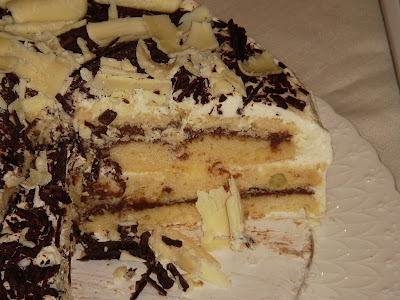 here you can see the mousse layers. the white chocolate mousse layer in particular has been compressed by the weight and is too thin for my liking

The dark and white chocolate mousses tasted really good. However I felt the cake layers didn't complement them well. I would have liked a lighter crumb--kind of like more chiffon-like cake layers because of the need for refrigeration and the delicateness of the white chocolate cream.

When I served it to my friends, I had to apologize because I knew before we cut into it that it wasn't up to snuff. My usual cakes are moist and rely on Beranbaum's cake components. Her buttercreams are to die for and her cake recipes are foolproof and flavourful. She's my go to for cakes. My friends were polite and said it was good but N. was honest and said it wasn't as good as my previous cakes. She felt that the cake layers were almost too dry as well.

This is why from now on, I'll stick to my Beranbaum buttercreams. This way, when the cake layers come to room temperature (which is important for the best flavour and texture) the buttercream will still be looking good. I like the fact that I can rapidly create a flawless surface with buttercreams too.

The Verdict: I won't be making this cake again as it's not worth the amount of time and there's too much potential for failure. It's too finicky and the instructions for the white chocolate cream component were too general. I would have liked to know how long to whip the cream with the melted white chocolate. I would have liked to know what temperature exactly the white chocolate mixture should be before adding it in to the whipped cream. I shouldn't have had to research it online. As well, the results were so-so. It wasn't a total disaster but I had to work really long and hard to salvage this one.

Never add melted white chocolate to whipped cream to make a mousse without checking the exact temperature of the chocolate...no, no, touching it won't do--you need a thermometer!

Never add the dark chocolate cream component to a plain buttercream base in the hopes of recycling leftovers as it will curdle the whole batch of perfectly good buttercream. You can add leftover ganache to buttercream but you can't add a whipping cream-based mousse because of its higher water content.

Chocolate doesn't like whipping cream but it loves butter

can you please share the recipe? or is this the same chocolate cupcake with ganache buttercream u posted earlier? such a sily question but wis ganache something we make or can be bought from the store?

Hi,
Yes, when it comes down to the crunch and I'm pressed for time I go to tried and true recipes. The chocolate cupcake is the Barefoot Contessa recipe I have posted earlier. The Ganache buttercream is just me using up leftovers: a dollop of ganache (made of heavy cream & dark chocolate). I don't believe I've seen ganache at any store around here. It's so easy though. I'll try to post a simple recipe for ganache. Check out my recipe index soon. I'll put a simple ganache recipe there. You could just as easily melt some dark chocolate and add it to your buttercream, though it won't be as light.

I've been wanting to make this cake since I got the cookbook for Christmas. Now, I'm not so sure. It seems like alot of work and ingredients for a failure. Thanks for the opinion!

Yes Megan, I considered this a failure. However, perhaps I wasn't in the "zone". If you do try it out, let me know how it turns out. Maybe you'll produce something fantastic?!

i just read this write-up of yours...i googled the recipe after making this cake myself. i had the same issues as you (sorry to say it, but it makes me feel better to see). the dark choc cream was way too soft and squished out between the layers. and the white choc cream was too loose to frost with. i also curdled it the first time and had to remake..ugg!!

Steph,
Isn't it frustrating when a beautiful picture of a recipe lures you in and your results don't match it? It's nice to know that I'm in good company. Thanks for letting me know you had the same problems. Now I don't feel so bad about my results. It's such a crime to waste good chocolate on a recipe like that!