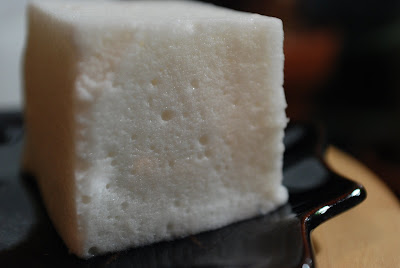 I don't know if you can tell, but I received a new camera for Christmas from Stomach. I had been bitching about not being able to play around with my pictures. I had a credit-card thin Sony digital camera that was great for taking everywhere with me but I couldn't do much with the camera other than point and shoot (not that I had any idea what to do otherwise, by the way.) 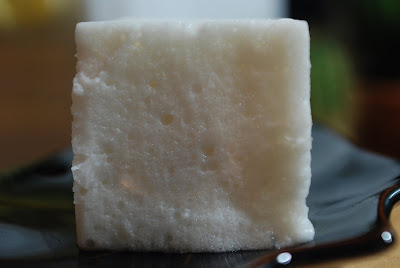 coconut bubbles are captured by gelling the egg white/coconut mixture

Stomach had taken photography courses so he had all these lenses for his Nikon camera that were going to waste what with digital technology. Fortunately, the new Nikon D-80 he bought me can use those lenses now and they haven't gone to waste after all. Now he just has to sell the body of the old camera.

This camera is very heavy compared to the micro-thin camera I'm used to but it's fun playing around with the settings. I haven't figured out entirely how to focus properly and apparently my composition sucks because I've never taken a photography course in my life! so bear with me. I think I'm having fun and I don't really care anyway. I think I see some further accessory purchases for this camera on the horizon, namely those fancy schmancy flashes that go off simultaneously. Lighting is definitely an issue. 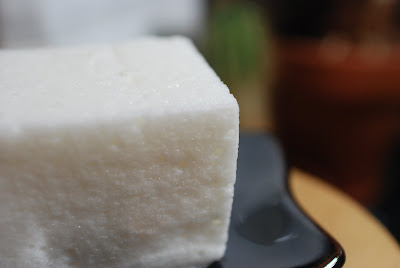 This dessert is more of a gelled pudding than anything. You can enjoy Coconut Pudding at your local Dim Sum restaurant and sometimes it's made with an egg white foam and other times it isn't. When egg whites are incorporated into the pudding, the texture becomes almost spongy. It's snow-white and a wonderful play of cold, foamy coconut; quite like biting into a cloud if it were made of coconut cream!

Absolutely brilliant! I love it! Happy New year! Santa is late but I am also a new camera,I can't wait! Enjoy playing with yours!!

Thank you for this! It is a Dim Sum dessert that I quite enjoy. Can't wait to make it at home.

You're welcome, Josie. I love Dim Sum desserts too. Give it a try. The next Dim Sum dessert I'll try to make will be Black Sesame pudding. That's cool and yummy too!

wow! that is too tempting am so making this soooooon

I see. You were right, I think I didn't get the coconut pudding chilled enough so it sinked to the bottom, creating 2 layers. I first got it over-chilled as it became 80% pudding, then I melted it over hot water. Thank you so much for your help! I will try it again & hopefully I can get it right =)

I got it right this time, on my second try! I did exactly as you said. Thanks!

Thank you for your recipe! It's great, and my mom, who's a coconut pudding critic said it was pretty good :D

Can I substitute the milk for almond milk?

Yes, you can substitute almond milk for milk. Yiu can use coconut milk or any other nut milk to sub in

Can I use coconut cream instead of coconut milk?

no, you cannot use coconut çream