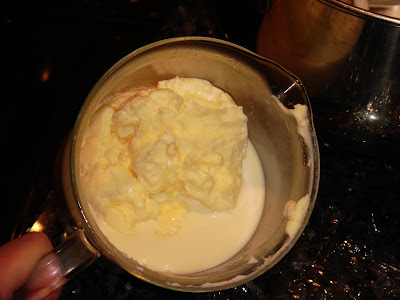 any ideas what to do with curdled white chocolate mousse?

I knew I shouldn't have mouthed off about how I didn't think there would be a problem with me making Dorie Greenspan's Black and White Chocolate Cake recipe.

Perhaps I was too cocky. I have never had a problem with mousse before. I've made it dozens of times over the years...but I've only ever made it the classical way with dark chocolate. I didn't think the White Chocolate Whipped Cream component would be a problem at all.

I completed the cake layers and the dark chocolate cream this morning and then proceeded to make the white chocolate whipped cream. It only has 2 ingredients for goodness' sake! How can you go wrong?

Well...it went wrong in so many ways. I was following the recipe to the letter and it said to add the room temperature melted white chocolate/cream mixture into the softly whipped cream mixture all at once and beat on high speed until it holds firm peaks. I did that. And whipped and whipped and it never did hold firm peaks. It looked runny. Then it looked really runny...and curdled. When I took the mixing bowl out, I had a huge coagulated fat globule bobbing in a pool of watery milk. I thought I had made white chocolate butter.

What to do-what to do?

I thought that perhaps I could save it by melting it all together and then letting it cool down to room temperature. I had some extra cold cream in the fridge and whipped that up and tried adding the remelted/cooled mixture to the newly whipped cream. It curdled again. It never went beyond a soft mushy stage.

My baking mojo was gone.

I had angered the pastry gods somehow.

I consulted texts and they didn't say anything much that would help me. I looked online and not much was said about how to rescue curdled mousse.

I knew I had to persevere and maintain the positive baking karma or I would be beat. So I called J. and consulted her. She said I should melt it and leave it in the fridge for a long time. I did. I melted it gently (it took mere seconds); took the bowl out after a long time in the fridge and stirred the mixture lightly with a spatula just to check it and lo and behold, it curdled! The butter fat had floated to the top and solidified in chunks despite my mixing it thoroughly before putting it in the fridge.

I'm left kind of scratching my head at this one.

I decided I would waste only one more batch of white chocolate before calling it quits. Right now it's sitting next to me in a bowl with a thermometer sticking out of it. It's 87.9degrees F, but I'm not doing nothin' until it reaches at least 85degrees F.

I can't not bring a birthday cake tomorrow. What to do? what to do? zoiks, I'm even writing double negatives now. This is a sorry state indeed.

Ooh. I have to go now as the white chocolate is nearing the temperature I need.

Keeping my fingers crossed. Stay tuned. I'll be back.

I was so scared of wasting all that beautiful white chocolate. As the whipping cream came to the soft peak stage, I took the bowl of white chocolate mixture which happened to be at 83.2degreesF exactly at the moment I approached the KitchenAid. I made a little Christmas Wish and dumped it into the mixing bowl. I closed my eyes as I cranked the KitchenAid to full power, just as Greenspan indicated in the recipe. I held my breath as the white chocolate mixture integrated into the softly whipped cream; the whisk leaving little spirals in its wake.

I turned the KitchenAid off. What if it curdles? The mixture was still quite soft. It wasn't holding firm peaks at all. I was so afraid of another curdle. I cranked it up high again. That's what the recipe says, "high"! and got worried when the mixture started to thicken a little bit; the whisk leaving a slight trail now. The last 3 times it was mere seconds after this stage that the mixture broke.

I couldn't stand it.

After another 3 starts and stops, I just called it quits and convinced myself that it was firm enough. I had read somewhere online in someone else's recipe that it'll firm up in the refrigerator (and not to worry about the runny appearance!) I'm still concerned that the white chocolate whipped cream component will not be stiff enough for spreading on the cake layers. I have to wait at least 2 hours for the white chocolate mixture to cool before assembling the cake now. 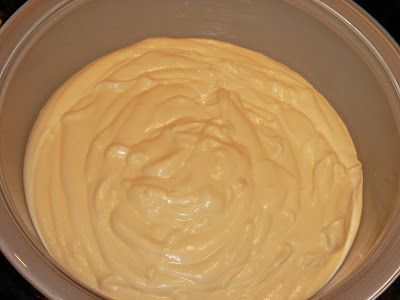 This cake better be worth it because I'm pretty peeved by all this effort right now when I can be kicking back in my armchair with a rerun of The Sound of Music playing on the t.v. in the background while I do such lazy Christmasy things like thumbing through my new copy of Sherry Yard's Desserts by the Yard (thanks for the bday present, J & M!)

That's very frustrating. I know how awful it feels when things don't work out and you've wasted ingredients.

I took a look at the recipe and I think you might have more luck making it like a regular ganache (i.e. chop the chocolate, boil the cream, pour over the chocolate, wrap with plastic wrap, then stir 5 minutes later until melted), refrigerate until the mixture is completely cool and thick, then whip. I've made both dark chocolate and white chocolate mousse this way, and they have whipped up into nice stiff peaks.