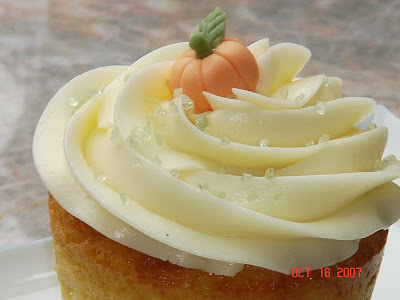 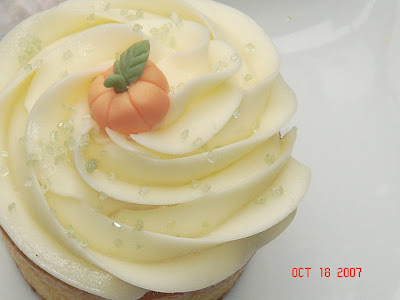 Bebe wanted cupcakes (Bebe always wants cupcakes) and she always ends up eating all the frosting first; leaving the cupcake behind. The other day I was making FIMO food with Bebe to stock her empty larder in her dollhouse's kitchen. We made carrots, hotdogs, hamburgers, apples, pears and bananas out of the polymer clay. I didn't realize how easy it was and all you need are toothpicks and a little knife. Afterwards you bake them, following the instructions, and you have sturdy hardened little pieces of food with which to play "house." I was thinking I could transfer my food-modelling skills to real food in the form of fondant or marzipan. 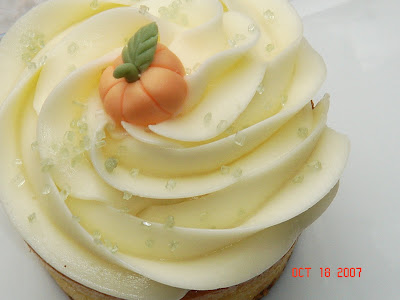 I went to open my huge tub of fondant which I keep in a plastic-lidded popcorn container. To my dismay the entire piece of fondant was rock hard. I chucked it out and consulted my Wilton manual for a recipe and decided I only needed to make little pumpkins and leaves--not cover a whole cake. I quartered the recipe with good success. The recipe for rolled fondant from Wilton was easy but required a lot of kneading. I didn't have orange food colouring in my stash of gel pastes so I just mixed in some red and yellow gel paste food colouring until it looked pumpkin-coloured enough for me. After a ton of kneading, the fondant finally looked evenly coloured and ready for modelling. The pumpkins are just little rolled balls etched with a knife. I used a toothpick to poke a hole down the centre where the stem would be. Then I inserted the tiny stem and a little leaf, using the toothpick to manoeuvre the fondant and attach it. 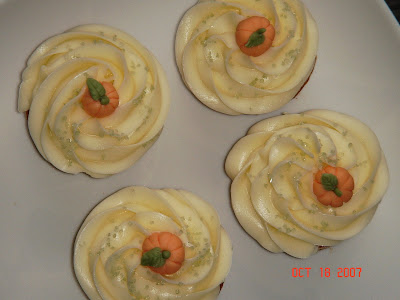 I made the White Chocolate Cupcakes and frosted with a simple buttercream. My white chocolate mousseline buttercream would have been especially delicious on this cupcake. We decorated with some sugar crystals and popped the little pumpkins on top and they looked so cute! Bebe said the pumpkins were the best part and proceeded to eat all the frosting afterwards. As usual, after licking off all of the frosting, she was too full to eat the cupcake part! 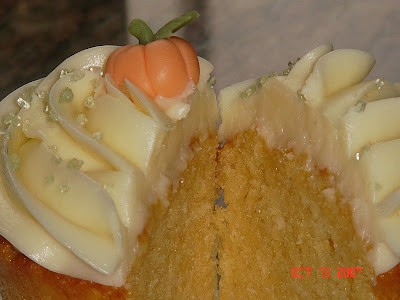 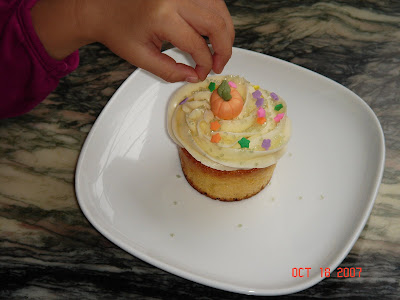 a star-studded, sprinkle-laden cupcake being decorated by Bebe
Pin It
Posted by Cakebrain at 20:47

These are so adorable!

These look awesome! Love the pumpkins.

Those look incredible!! Tasty, and beautiful!

What fun! It was so interesting to read about your process too. Have you tried sculpting with marzipan yet? I've always wanted to do that. I love the pumpkins, and the sugar crystals are a great touch. I think those kinds of projects are way more fun with company. Thanks for sharing!

Ooo... They are too pretty to be eaten!

Thankyou everyone for all the kind comments! I'm new at blogging still and haven't figured some things out yet!

FIMO, fondant, marzipan and Playdough--they're all pretty much the same to sculpt for me! Actually, Bebe can't have nuts--it makes her break out in eczema; so I have to use fondant instead of marzipan. However, marzipan is tastier in my opinion. You can also buy a chunk of it premade and just mix in food colouring.

You're so talented! Those little pumpkins look amazing.

Anyone know a good source for plain marzipan? Anytime I see it, it's covered in chocolate!

NightPanda,
Marzipan can be purchased at Famous Foods (on Kingsway)in bulk packages.

First of all, would like to thank you for answering all my questions promptly. All of your cupcakes pipping are so beautiful, such as this one. What Wilton's tip do you used. Also I don't know why it will not let me leave my name for the comments, I always have to use anonymous:) Thanks again, Quyen

Quyen,
I use a 1M tip. Are you on Blogger? If you have a google account you just have to choose your identity.