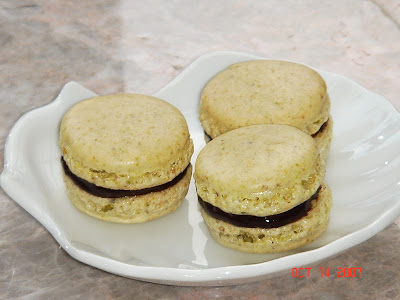 I had the good fortune of having a trusty comrade fighting by my side in my macaron battle today. J brought along a macaron recipe from Nick Malgieri and another from Kate Zuckerman's The Sweet Life. She too had been testing out recipes in preparatory anticipation of our ensuing battle. At home, she noticed some inconsistencies from batch to batch: first batch, no feet; second batch nice feet! Knowing J, and her exacting ways, I trust that she followed the recipe exactly. I mean, she didn't even want to play around with the batter and add any flavourings! The Zuckerman recipe was promising and so we tried it in my kitchen today; trying to tweak it to work for us. The only problem was that it called for one to leave the piped macarons out from 1 to 2 hours to dry and allow a "skin" to form! She had abandoned the Malgieri recipe because they all turned out too cookie-like.

Here's how the Zuckerman recipe went: 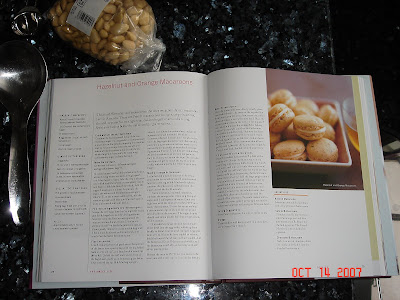 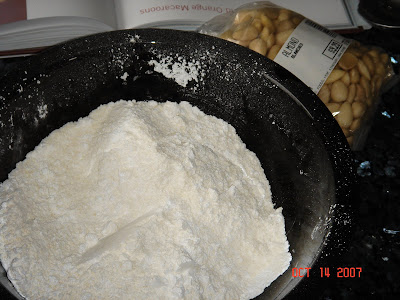 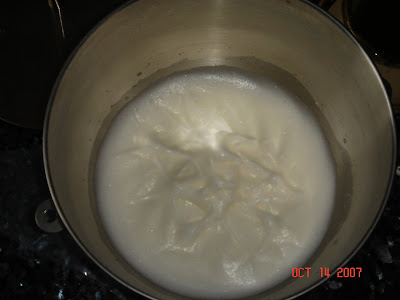 zuckerman indicates to whip eggwhites to the soft peak stage 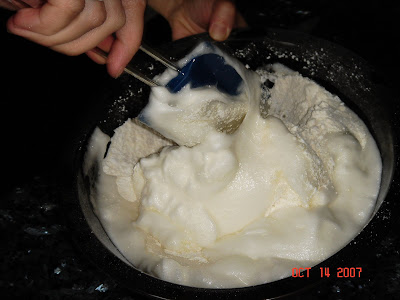 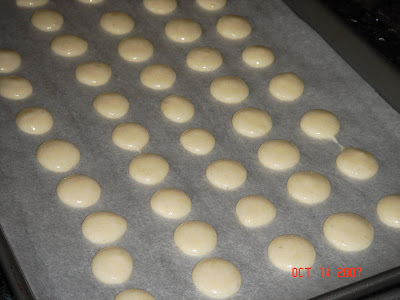 While we were waiting for the skin to form, I suggested we make another batch with an interesting Pistachio Macaron recipe I had noticed on Tartelette's blog. I turned on my computer, grabbed 3 eggs straight from the fridge and cheated time by warming them up in a bowl of hot water to bring them to room temperature.

Upon looking at the baking Zuckerman macarons (which by the way had already been sitting for 2 hours on the counter waiting for skins to form), J noticed they weren't producing feet and some of the cookies were cracking. They were looking like plain ol' ordinary cookies. After dickering with the temperature--an initial blast of heat and then lowering it; reducing the temperature to the same as the pistachio recipe's, etc., we still couldn't get them to behave properly. So disappointing! She whipped the trays out of the oven, exclaiming they were unworthy of further time in the oven and the ganache filling! She's pretty strict, eh? I'm glad she's on my side in this battle. 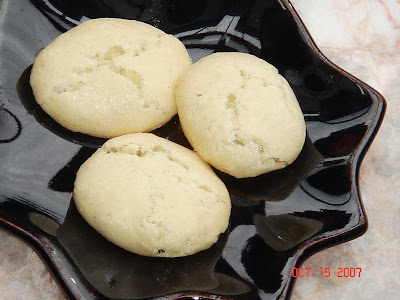 zuckerman macarons with no feet, no smooth tops and cracked surfaces. yummy though

After grinding whole almonds and pistachios with confectioner's sugar, I folded in the stiffly beaten egg whites. The mixture was way stiffer at this point than Zuckerman's recipe. 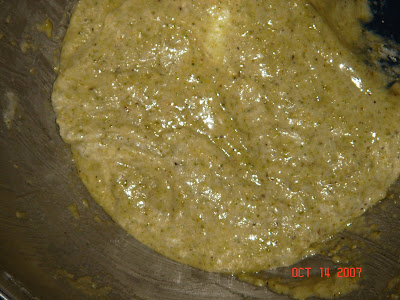 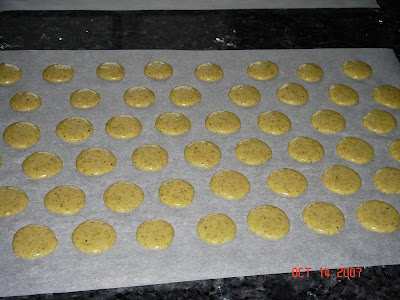 tartelette's macaron soldiers, ready and waiting (for only 20 minutes! not 2 hours like kate's!) 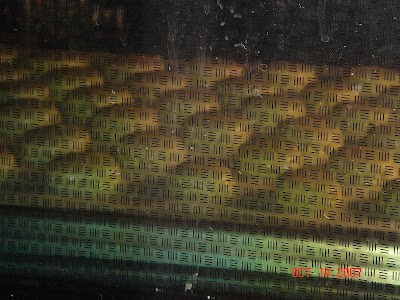 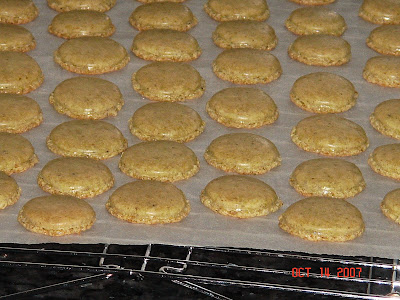 and then collapsing after I brought them out! drat! 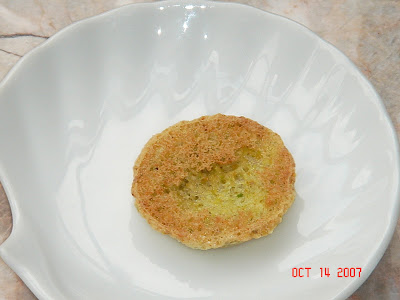 some of these collapsed macarons had hollow bottoms. odd.

At this point, I decided the oven must be too hot (it was set at 315degrees F throughout for 12-14 minutes) for the full amount of time that the macarons had to be in there to bake. For the next batch, I watched them "rise/create feet" first (at 315 degrees) and as soon as the feet were at their height, I then turned the oven down to 300degrees F to finish baking. The results were much better looking and they looked very promising indeed! 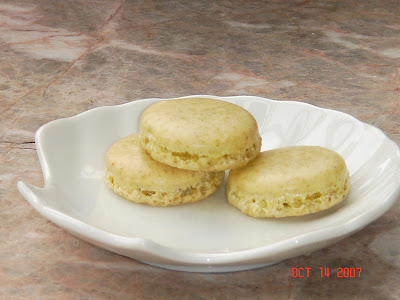 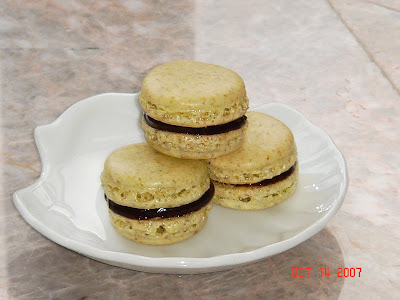 we quickly whipped up a simple ganache to sandwich the macarons
So the Tartelette recipe looked good and smelled good. It had a smooth top, it had even, frilly feet and the exterior was thin and yielded to gentle pressure. It was very delicate and when you bit into it, it was mostly hollow; its texture was slightly chewy and the flavour was delicate pistachio with a hint of almond. The ganache filling, when piped too thickly, was too overpowering and you couldn't taste the pistachio...so I would say a buttercream would be a better match. We later opted to make the filling just a smear to hold the two cookies together, though the cookie looks prettier with a thicker amount sandwiched in between.
Having tasted professionally made macarons, I was still not wholly satisfied however. I'm a texture person. I hate nuts, raisins and anything seed-like or grainy in my baked goods. Yuck. Though these macarons didn't have chunks (we sifted well), I didn't really appreciate the fact that the ground nuts were not as fine as the failed batch I had made previously with almond paste or with the Matcha macaron batter using the sugar syrup based on Tartelette's recipe. I wanted the macaron to dissolve into nothingness, but instead I was left with a few grainy bits of the ground nuts rattling around in my mouth. Also, it did not have the slight crunch of the matcha macaron recipe; nor its stronger flavour profile. I felt the Matcha macarons were much closer in texture to the macarons I like.
With both these recipes, we started off with whole almonds and whole pistachios. I personally like the more consistent and finer texture achieved by starting with almond paste (ideally) and after that, commercially ground almonds. Whole almonds have so far to go before they're fine enough for me.
I declare the Tartelette Pistachio Macaron recipe the winner today and have to say that the foolproof method of using the sugar syrup is superior in texture.
My next batch will be CHOCOLATE MACARONS! I hear they're the toughest flavour to make...
Pin It
Posted by Cakebrain at 20:48

Hi Felicia,
You know, I honestly can't say I know for sure what the problem was that created lopsided feet. I have some ideas of what they might be, but who knows for sure? It might be because I needed to rotate the baking sheets to get even heat distribution. It could be that I needed to insulate the sheets with another sheet underneath. Or maybe the macaron gods needed a sacrifice or something! Just keep trying, I suppose! Good luck!

Haha, thanks for your help! Good luck with your macarons too! Your pistachio look really actually, did u use the sugar syrup method for it?

Hi Felicia,
Yah, the pistachio ones actually turned out as they're supposed to I think. These did not use the sugar syrup method. I just added the confectioners' sugar/almond mixture to the beaten egg whites and tah-dah...It's much faster/simpler but not as foolproof as the sugar syrup method. The texture of the macaron is also different. It seems more moist to me. I've got some egg whites "aging" in the fridge right now getting ready for my chocolate macaron recipe. I recommend you try the pistachio recipe link. You may like it.

i am also on a quest for the perfect macaron recipe. i just wanted to say that i tried the Kate Zuckerman recipe --or i should say, a variation of it-- with day-old egg whites, and it worked. i haven't tried the Italian meringue method yet, but that's next on my list. Also, i had an experience with lopsided macarons just like the commentor above, and i believe that the culprit in my case was low oven temperature (and possibly understirred batter). Sugar and Tang's posts on macarons, address some of these problems.

Good luck with your chocolate macarons. The one that worked for me (although i find it a little on the sweet side) is D. Lebovitz's recipe.