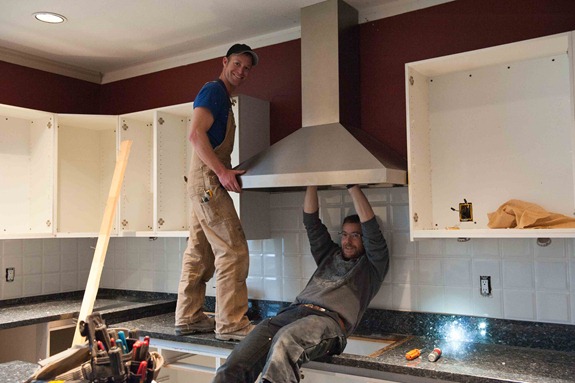 BEFORE THE RENO PICS:
Just so you know, I had crackers for dinner.   My kids subsisted on Halloween Candies, instant noodles and bread.

Nov. 1, 2011…the night before the demolition begins, I have packed away the tons of dishes, food, pans and detritus from my kitchen.  Every square inch of horizontal space in my home has kitchen stuff on it.  I even managed to squirrel away all my fine crystal wine glasses high up over my fireplace.

These pictures were taken the night before the demo: 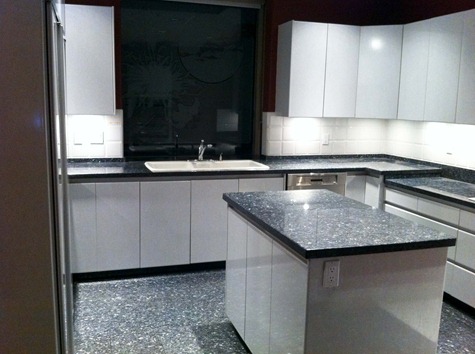 This is my kitchen.  Yah. Very grey.  When we bought our home over 8 years ago, I knew that the granite looked expensive.  Someone paid a pretty penny for it.  But gads, when you spill something, you can’t see it!   I came to curse it as the years passed. 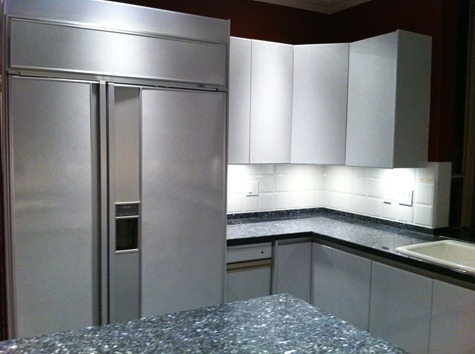 That’s the Sub-Zero fridge on the left that’s broken down several times since we’ve moved in.  We’ve had it patched up but it’s on its last legs.  I thought they were supposed to last forever.  Guess not. 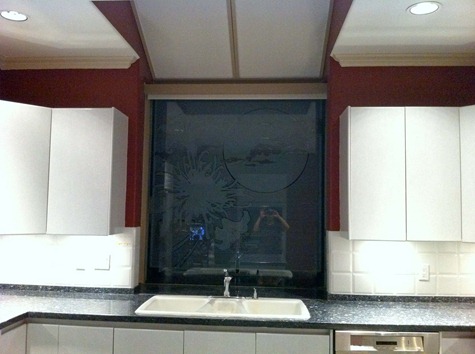 I love my window area but hate the 3-bowl cast iron sink.  The garburetor is in the centre.  The faucet doesn’t reach the other bowls adequately and when I wash stuff, inevitably the front of my shirt is drenched because the water splashes up the shallow middle sink.  Not so practical for big pots and pans either. 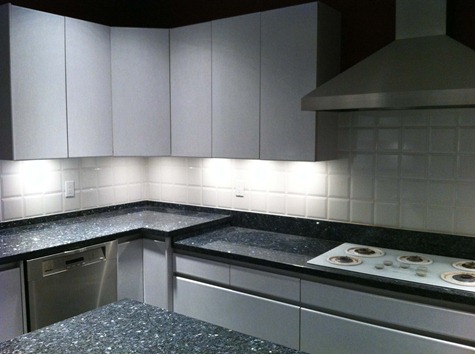 That’s a Miele dishwasher.  This is relatively new as my old dishwasher broke down the second year we moved in.  The hood fan broke down last year.  So the Vent-A-Hood you see is practically brand new.  Keeping all that new stuff of course. 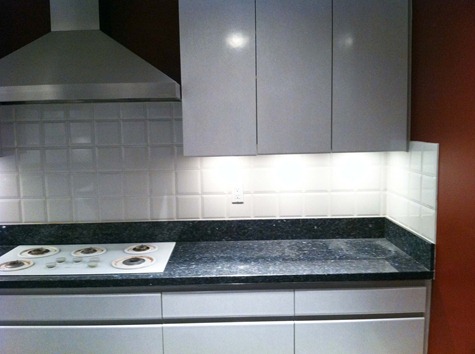 That horrid range is going and I’ve ordered a Wolf.   Red knobs! 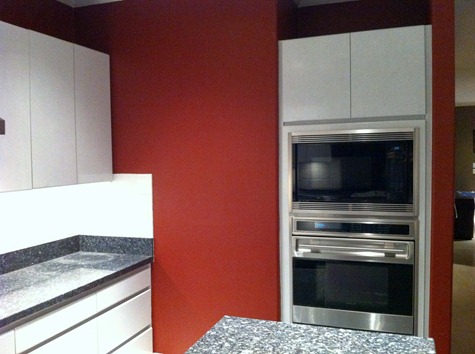 The first year we moved in, the microwave broke down and then the oven was too small to roast even a chicken (it was a Jenn Air).  I purchased a Wolf Convection Oven (on the bottom) and the Convection Microwave (top) to replace them.  These are keepers of course. 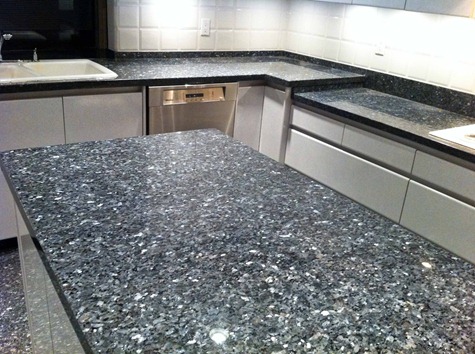 This is the counter where I usually do all my baking and prep work.  It’s not huge but it’ll do.  I will be replacing the island granite with White Marble. 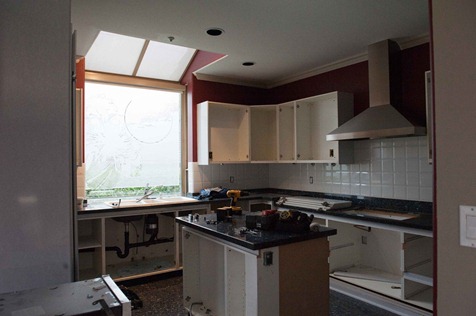 I’ve known Will for a long time.   He’s a good friend.  When he decided to start his own renovation company, McPhail Renovations,  I was very happy for him and I kept him in the back of my mind because I knew his attention to detail and even-keeled personality would appease my OCD tendencies if I should need to renovate. 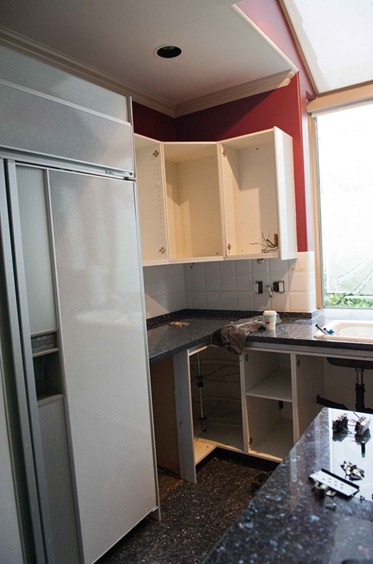 Will is not your typical contractor.    I’m not saying other contractors aren’t intelligent, as I’ve only dealt with a handful, but Will is definitely cerebral.    This came in quite handy on Day 1 of the Demo when he and his assistant Philippe had to remove the Vent-A-Hood.  They were cursing the guy who designed it (and me for choosing it)!   Not only was the Vent-A-Hood built like a jet engine, it weighed like one.   That, and it didn't help matters that I hadn’t cleaned the icky tacky film on the hood in a couple of weeks or clean the nasty buildup in the trap prior to them removing it!   My bad! 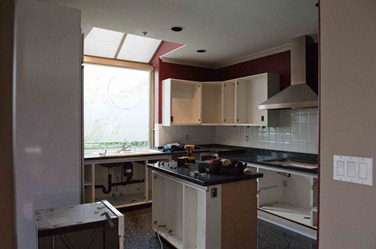 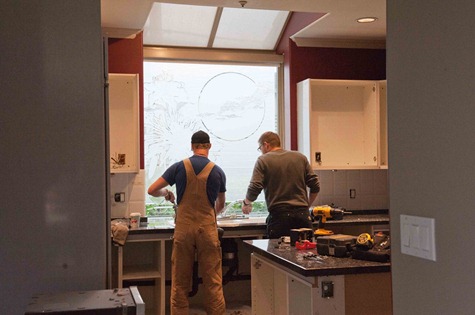 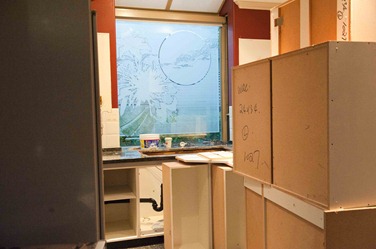 Island’s dismantled, top cupboards are down and appliances are out!  The appliances are resting on my dining room floor.  The refrigerator’s still in there currently. 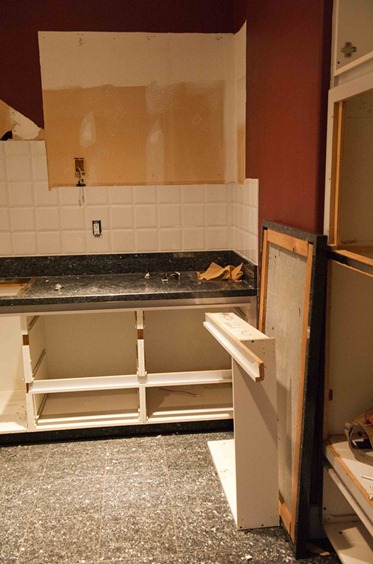 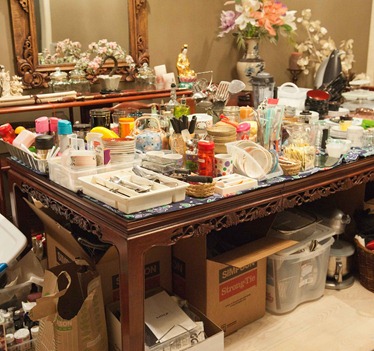 My dining room table loaded with my kitchen innards.
Pin It
Posted by Cakebrain at 23:21

I love the look of your pre-renoed kitchen! Good luck with the renos! (Some friends of mine with a granite counter top found that they actually had to get it re-sealed annualy.)

The kitchen looks good pre-reno but I can't wait to see it when it's finished. I despise granite too but I'm sure when we rebuild our house, it's going to be granite, granite, and more granite.

Also, totallly love the last picture of your dining room table!
At least it's being put to use even through the kitchen isn't in use ;)