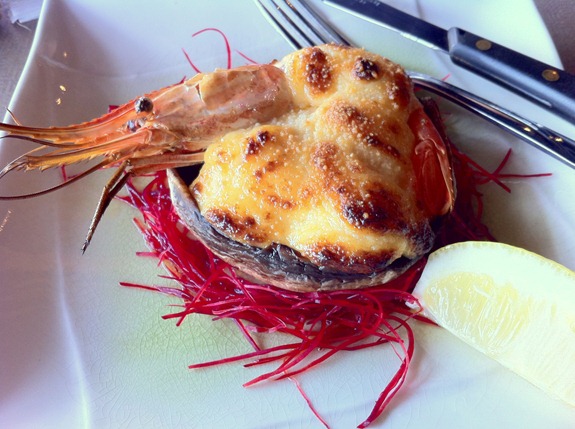 
I’ve been meaning to eat at Kai Sushi Bar for a while.  I received a 10% flyer a while ago but after looking at the menu realized the kiddies wouldn’t have much to eat here because they always want udon noodles.
Kai Sushi Bar serves primarily izakaya-type dishes and sushi, as advertised in its name.

The best dish I had was the Prawn motoyaki on portobello.  It was $12.  You tell me if you’re made of money and can afford this awesome tasting dish.  It was so good.  But it was so expensive.  Out of all the dishes, I think I would perhaps pay $12 for this one.  Maybe.  Hey, I don't have deep pockets. 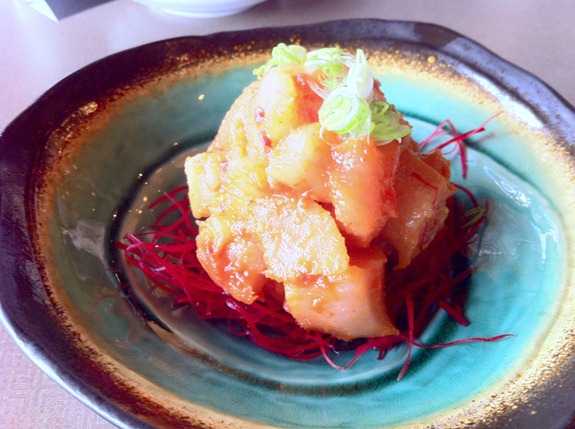 
Another factor that Stomach argues is a strong point against a repeat visit on our part, is the prices.  It is very expensive and even with 10% off, which btw we didn’t use because it had expired…we know we will be left feeling hungry.

The Spicy Tuna he argued isn’t any better than any other restaurant.  It was good but it wasn’t spectacular for the $9 price tag.  I thought it was good.  I would perhaps pay $9 for it again because I like spicy tuna sashimi. 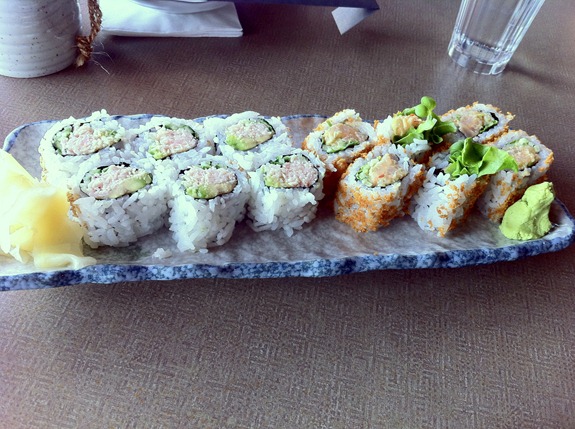 If anything was a rip today, it was this dish.  The plate has a California Roll (rating:  4/6)  on the left ($5) and a Hana Roll ($9).  Not only were the maki ordinary in size, they were ordinary in flavour.  I was especially disappointed with the size of the Hana Roll, which for $9 was so not worth it.  I was expecting something more substantial with way more scallion flavour. 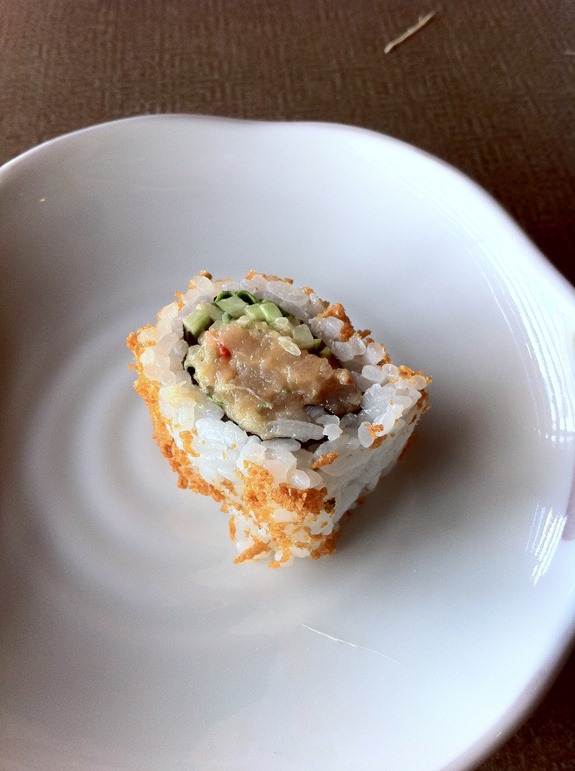 Here’s a piece of the Hana maki on my plate.  The crunchy bits were an interesting contrast.  Rating:  4/6 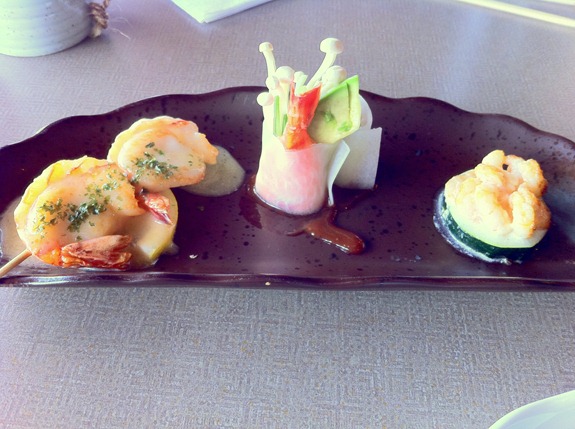 Innovative and delicious.  Very small portions though so Stomach and I just got to taste a little bit of each as we shared.  On the left is prawn wrapped scallop with lemon, then prawn sushi and prawn motoyaki. 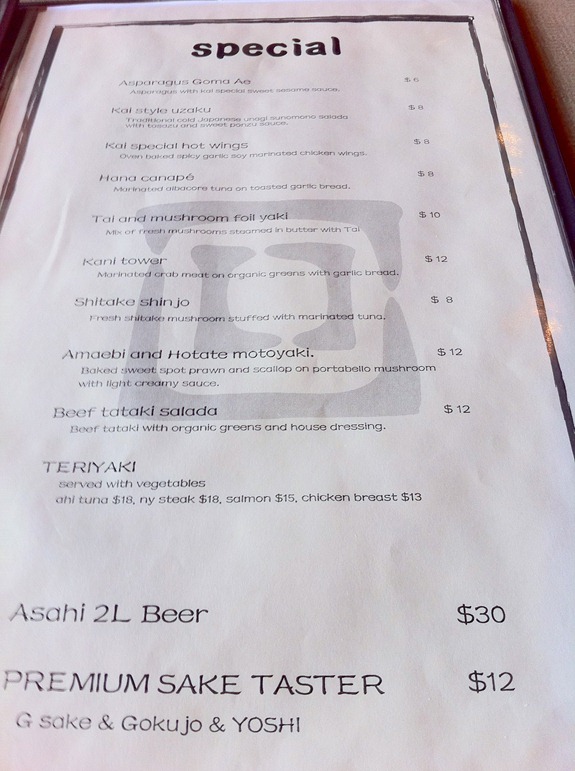 I took a few pics of some of the pages of the menu.  Many of the cooked dishes looked really enticing.  If I were to come back, it would be for the cooked dishes and not the sushi.  The sushi is over-priced IMHO. 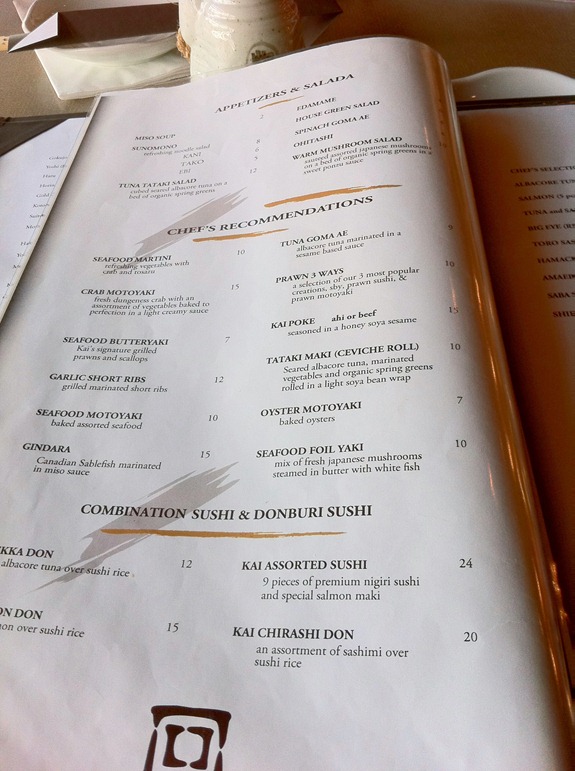 Stomach and I left the restaurant a tad hungry as the sushi portion was smaller than I expected.  Usually I’m almost full on a $9 creative roll.  This was so not the case this time. 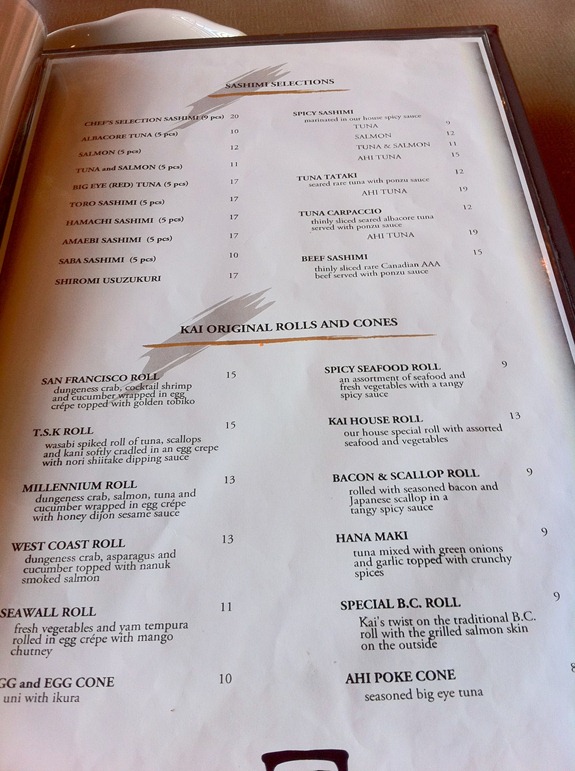 The restaurant was not that busy.   While we were eating, a lone woman came in and sat down at the table next to us.  After getting her tea and then looking at the menu, she promptly got up and left…no doubt because of the prices.  However, you know this restaurant is located near Shaughnessy and perhaps there are people who are willing to pay good money for their food.  The food was really good and the environment brand spanking new and nice.  The service was efficient and friendly. 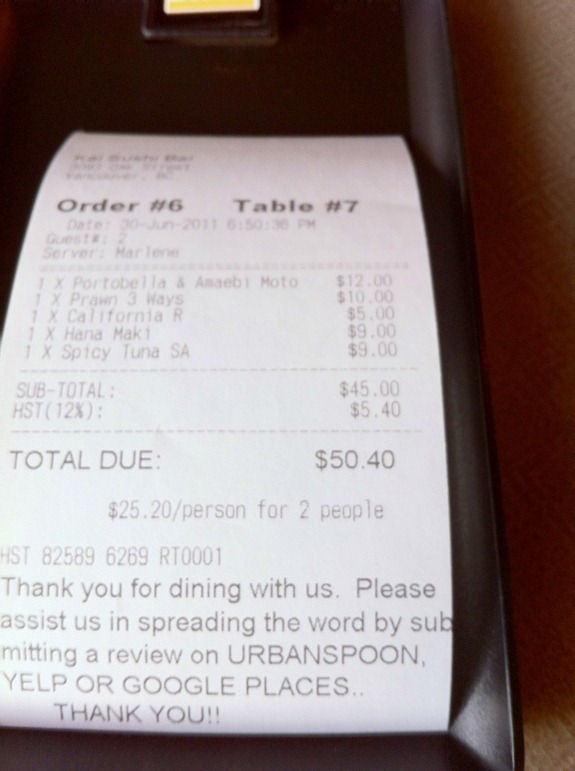 See that little note on the bill at the bottom?  Well, I’ve done my job and would like a discount for doing so, please.  I noticed that many reviewers "liked" this place and I can see why.  But geez, they must be money pants and tiny eaters.