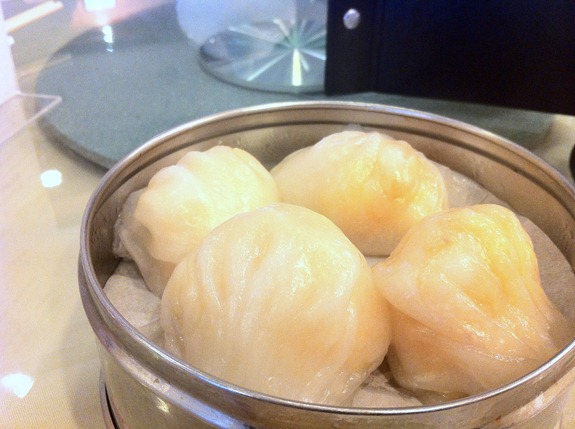 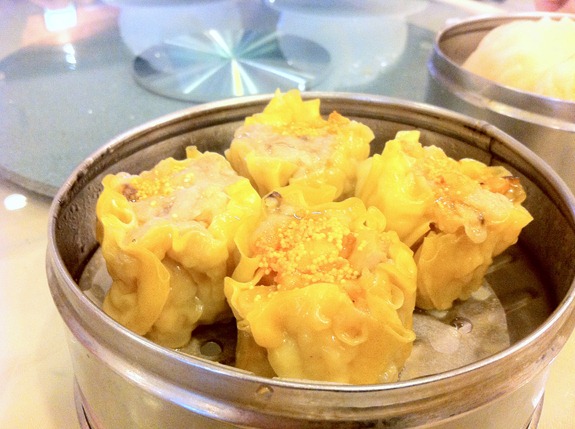 I heard through the grape-vine that Fortune Seafood Restaurant (located at Oakridge Mall) has changed hands and improved. The funny thing about Chinese Chefs seems to be that they move around so much and as soon as they “sell out” after pumping up a certain restaurant’s clientele, they’ll up and leave to go elsewhere. They seem to be a fickle lot. We diners are at the mercy of their whims.

So it was with this Oakridge high-end Seafood restaurant. It had garnered a reputation of being over-priced and the food was not meeting the high expectations of its customers. Rightfully so; especially if you’re paying high prices.

I am one to give second chances; especially if a restaurant has undergone a change of owner (and chef). I think if there were an iPhone app for following certain chefs around to different restaurants, I’d use it a lot. It would be an invaluable tool just like the Street Food app that uses Location Services to help you find street food nearby your current location. Wouldn’t that be great? 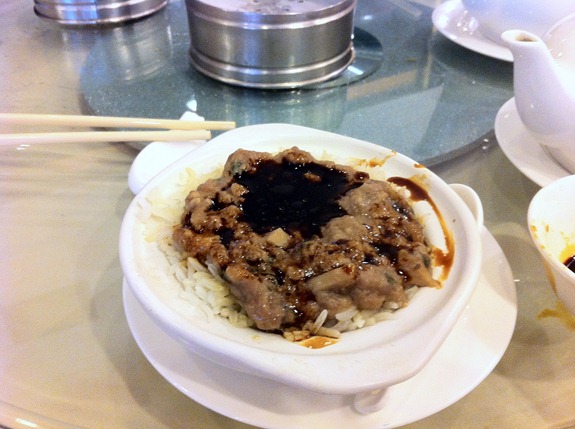 This little Clay Pot with Beef patty and Rice was so cute when it came out.  Looks aren’t everything though.  It was okay…kind of like one of those dim sum beef balls smushed flat and placed on the bed of rice in the clay pot.    4/6 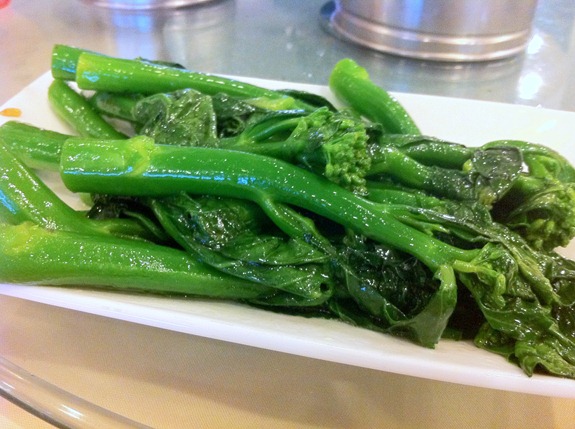 The Gai Lan was served bright green and long like huge tree stalks.  Not so cool in my books because it’s unwieldy between your chopsticks.  Despite looking really good, the flavour was just okay.  Perhaps a good deal of garlic would have remedied this problem.  4/6 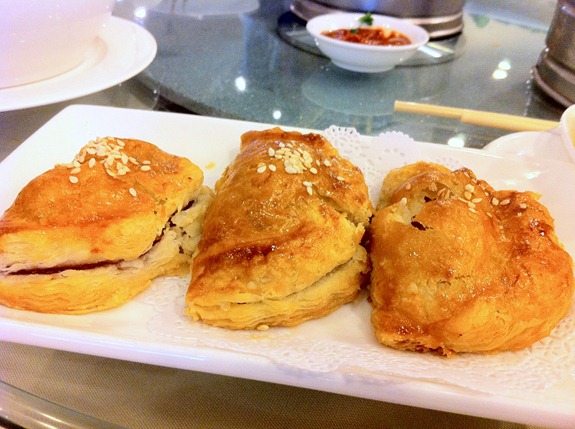 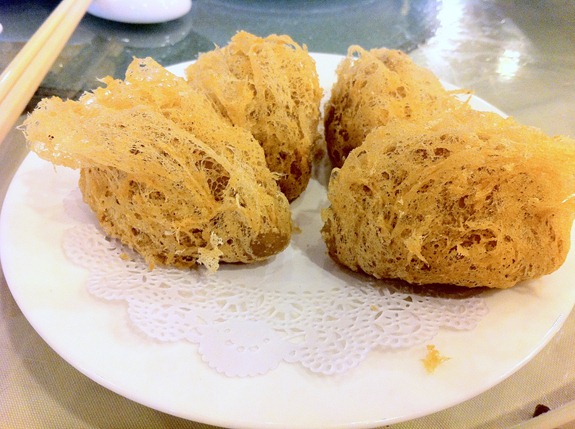 My favourite dish is Wu Gok (deep fried taro dumpling filled with meat).  I find the feathery crispy porcupine-like shaped dumplings are texturally awesome.   The coating should shatter; it shouldn’t be grease-laden and the filling should be saucy, succulent and meaty.  Taro is like a potato in texture and is famously employed in the Hawaiian Poi.   This Wu Gok version rates 5/6 in my books. 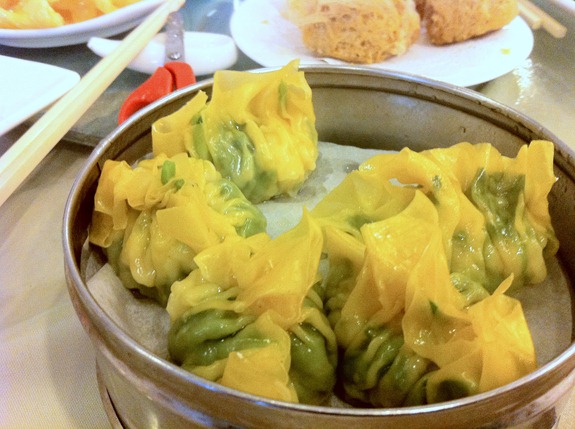 This Shrimp and veggie dumpling sounded good but the wonton wrapper was meh.  They shrimp filling and flavour was okay.  I rate this a 4/6 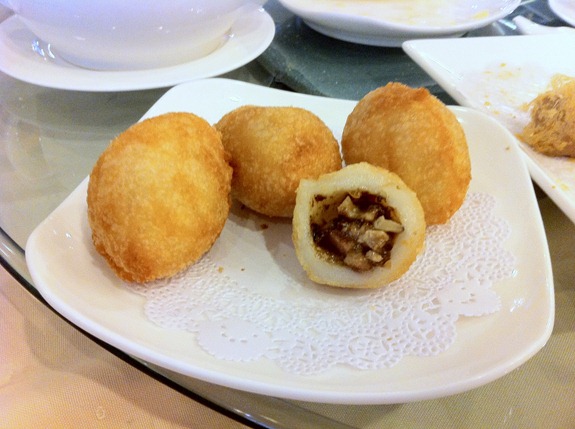 Haam Sui Gok (Deep Fried Pork Dumpling) is another classic dish/litmus test for the success of a dimsum joint.  This version garners 5/6 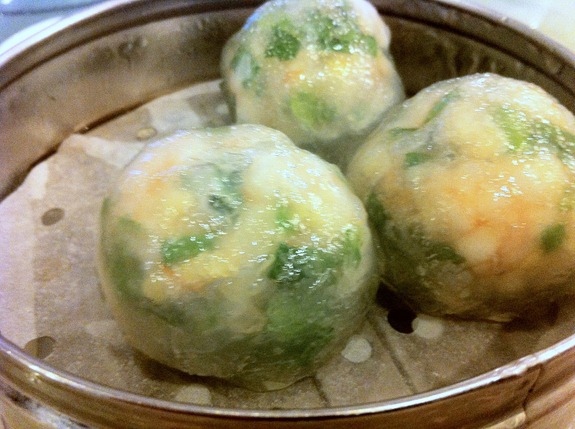 Another variation on the theme of Shrimp and Veggie dumpling.  I lost track…I think this one has pea shoots.  5.5/6 if you like this type of thicker skin made with tapioca 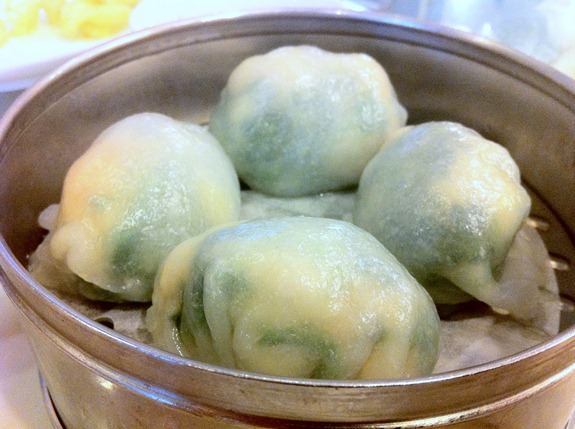 Yet another Shrimp and veg dumpling.  So many variations; not much difference really.  This one was 5/6 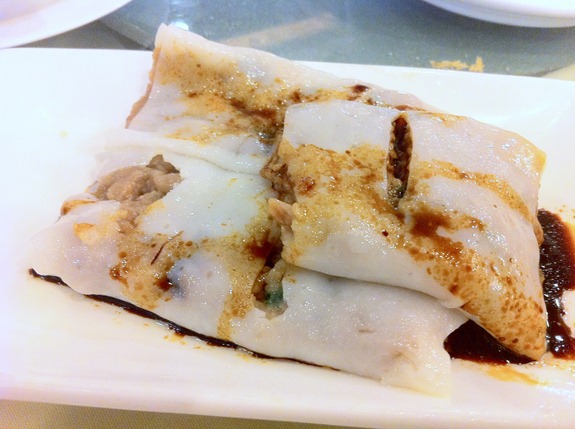 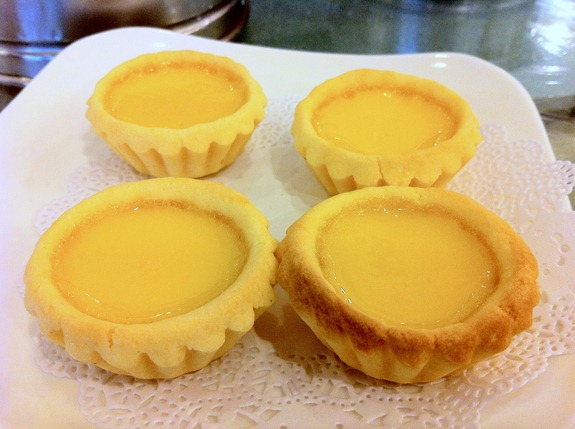 Egg tarts come in two versions:  with puff pastry shells or a sugar crust that is harder and much like a cookie.  This is the latter.   Being biased towards the flaky layered version which is way more difficult for a kitchen to make, I rate this 4.5/6 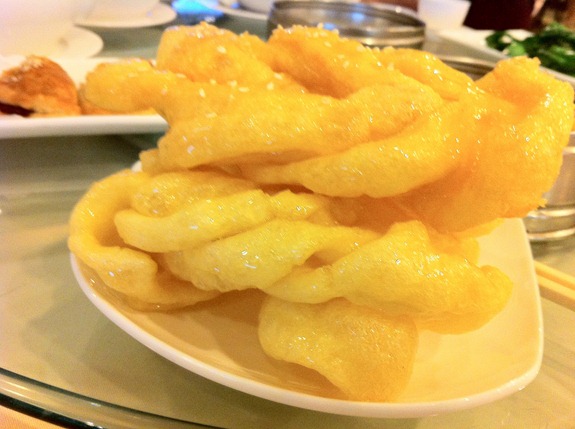 Daan Saan (Honeyed Egg Puffs) are my favourite dessert at dim sum!  The fuzzy picture doesn’t do this version justice.  I think I was too eager and didn’t have time to focus my  iPhone in my hurry to snag a piece.  Crispy light, lightly drizzled with a honey coating and sprinkled with sesame.  6/6 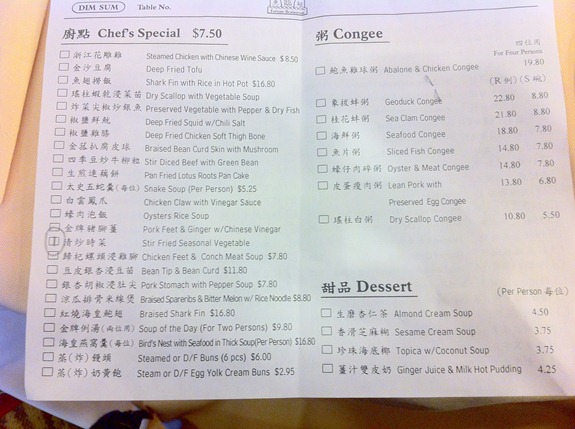 This restaurant’s dim sum selection is pretty good.  The service is decent (and you are paying for that) and the setting is considerably more upscale than some others.  It is conveniently located at Oakridge Mall and so parking shouldn’t be a problem; nor should access be an issue as you can take the Canada Line there.

You will definitely pay a premium here and perhaps this is why it rates so erratically with the community.  For these prices, you expect each and every dish to be stellar.  There were some hits and misses so sometimes it’s like Russian Roulette…not cool with  savvy foodie Vancouverites who demand consistency, quality and service for these prices.   I personally thought the food was good and would go again.   The environment was comfortable.  You are not jostling for space with a neighbouring table and there isn’t a mad rush of people waving their order forms running to catch the last steamer of Har Gow on the other side of the restaurant.  I hate that sometimes.  However, having said that, I didn’t pay for the bill either…we were out with some family.  Hee! ;p

My mom loves daan saan. She's probably been there for dim sum. I've only been to this restaurant for dinner, and the food wasn't very good.