BONES, FINS AND ALL SORTS OF THINGS: DIMSUM AT EMPIRE 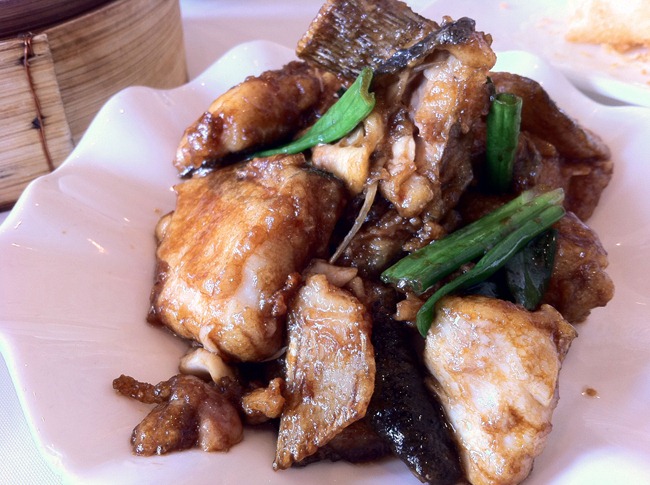 Halibut with Ginger and Green Onion ($6.95).  If you like bones, fins, bellies and such things, you’ll love this.  The halibut was very fresh and there were plenty of meat chunks alongside the gelatinous fins and fish skin.  The belly parts were the best.  Halibut doesn’t have tiny bones (my peeve) so I found it particularly easy to navigate around the parts I don’t like to munch.   6/6.    Almost every table had a plate of halibut.  It’s in season and very good. 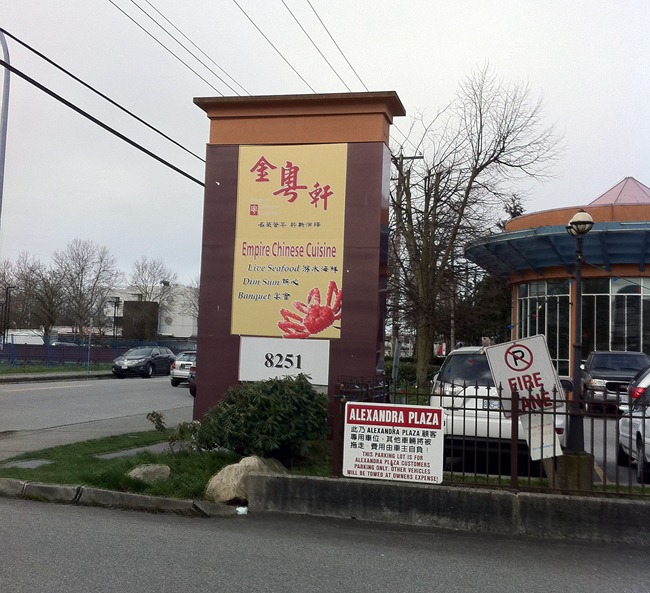 Empire Chinese Cuisine is a pretty busy place on a Saturday at 10:30a.m.  The restaurant is almost full and the parking lot is overflowing.  There is some street (meter) parking as well along Alexandra Road--a.k.a. Restaurant road because it's chock full of eateries.  The menu for dim sum is below. You just check what you want and hand it to the waiter.   There are these fabulous specials in the top right corner that I don’t usually order because I don’t want to take a chance…I can’t read Chinese.  However, I think it’s things like spareribs on rice and such.  I hate it when Chinese restaurants have special items on the walls or on their menus that they don’t translate.  It’s a pain.  It’s usually a smokin’ deal too.    However, the good thing is that because we went early (before 11a.m.) we received 20% off our meal.  The prices are on the heftier side otherwise. 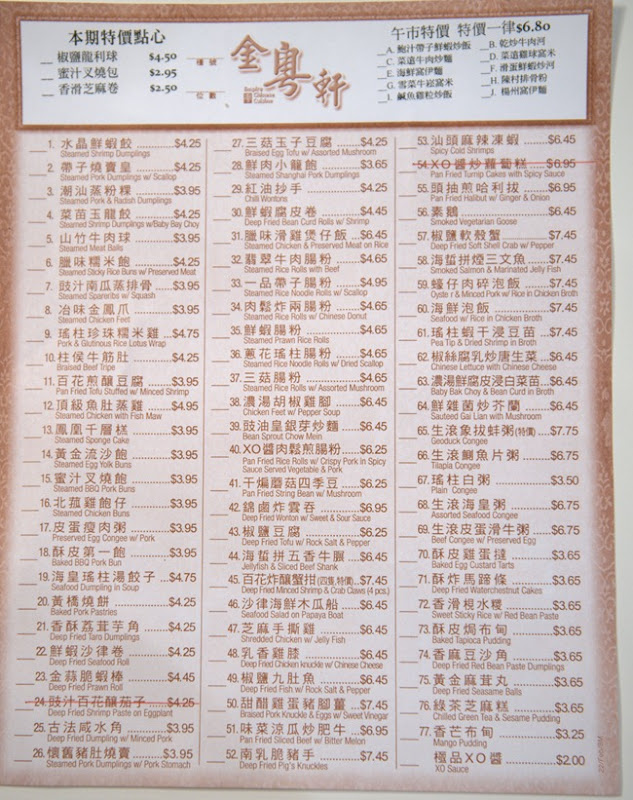 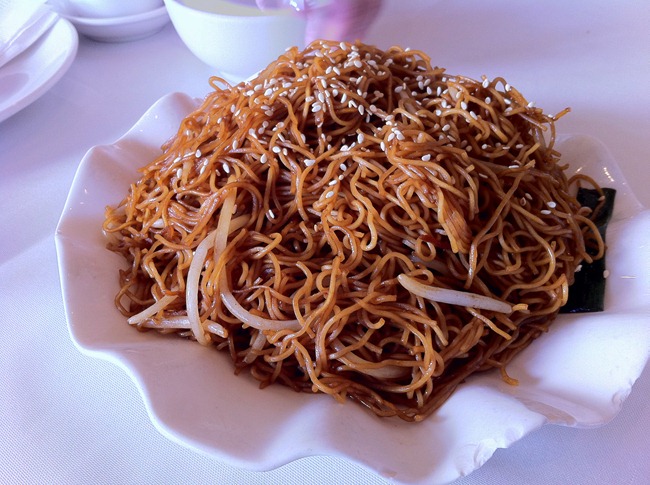 Bean Sprout Chow Mein (with Superior Soy Sauce), ($6.45) was my kids’ favourite dish.  They are noodle-heads truly, but Bebe said this was her favourite of the day.   Cakebrain’s rating:   6/6

By the way, sorry for the poor lighting of the pictures.  I take restaurant photos with my iPhone4 and not my Nikon D700 and the lighting in this area of the restaurant—in the atrium with the full light through the windows and the interior yellow lighting—ah well, you get the drift.   (whot? think I’d lug that D700 into a restaurant and aim it at food? not even for you, dear readers!  it’s a behemoth of a camera). Yah. Something’s gotta give and my dignity as it is, is at risk.  It’s already bad enough I have to shoo shoo the little fingers from the girls from the food when they’re hungry, “can I take a little pic first girls?”—as I quickly snap a shot with my iPhone4.  Just one shot usually, too.  I don’t take multiples; so if my hand shakes or I get a little finger in the shot heading for the plate, I have to crop it out.  They give me mean little faces and Stomach sighs and shakes his head.  The things I do for you!!

Baked Egg custard tarts ($3.65).  Super flaky and the custard was nicely set.  The custard as I recall was a deeper yellow than you see here.  Cakebrain’s rating:  6/6 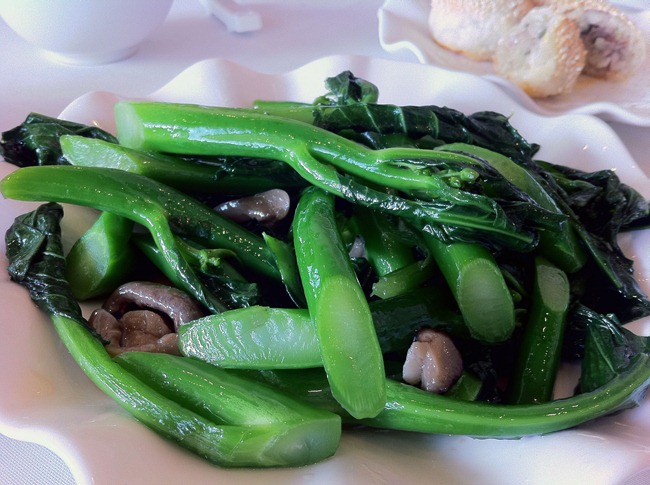 Sauteed Gailan with Mushrooms. ($6.45).  Tender yet crispy Gailan.  Girls stole all the mushrooms so I can’t tell you how they were.  The thoughtful thing the kitchen did was cut these Chinese broccoli stems so that you had one leaf per stem.  It is so much easier to eat with chopsticks.  I hate it when Gailan are left whole and you have to wrangle the whole plant with your slippery plastic chopsticks.  Inevitably, mine always slide off my chopsticks.  What’s worse is when you’re at a big table of people (not close family) and the Gailan episode is seen by everyone.  How embarrassing!  [“see how she holds her chopsticks! it’s so wrong!  she can’t even pick up a mushroom properly!”]

Hey don’t judge me!  I’m independent.  Self-taught.  My parents just kind of handed me a pair when I was a kid and let me figure out how to get food into my own mouth by myself.  The goal was to get food in the mouth!  Fortunately, I am able to do this quite proficiently in general.   Just don’t look at my form.

My kids have the luxury of new gadgets designed to teach kiddies to hold chopsticks properly.  We saw them at a housewares store in Parker Place Mall in Richmond and bought a few.   Bebe has broken 2 of them already (she had had them for over 5 years) and we had to buy new ones, but we’re very happy with them.  The kids since age 2 were able to use these and they pick up food better than with forks.  However, they have yet to graduate to real chopsticks.  It doesn’t seem to bother them yet though.  At least I don’t have to feed them.  That’s such a pain. 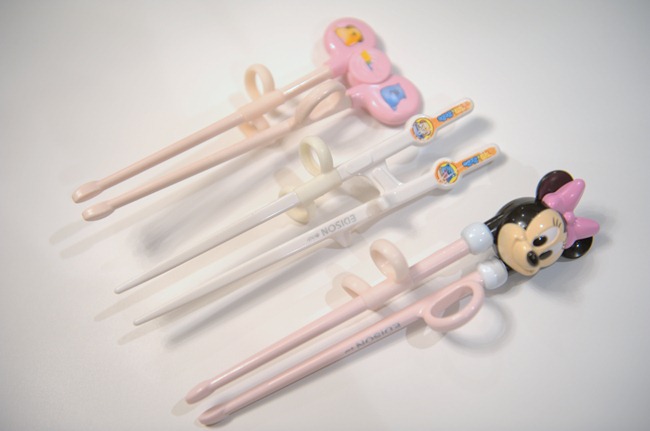 Children’s Trainer Chopsticks (by Edison).  On the top is the Level 1 chopsticks (joined at the top).  The Minnie Mouse one is all show and not as easy to manoeuvre because she’s top-heavy and sticks at the joint where her head is.  The best pair by far is the middle pair which looks better (in my opinion) and moves smoothly.  This pair is a Level 2 pair that in my opinion can be used instead of Level 1…which you can easily bypass if your child is older than 3. 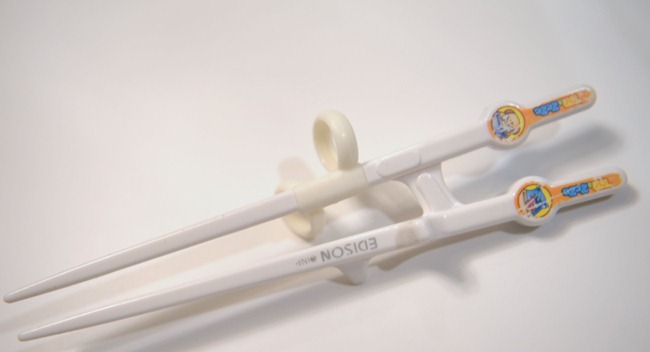 Edison level 2 chopstick for righties.  They have ones for lefties too of course.  It’s so forward-thinking of them to acknowledge that lefties exist!  It’s uncommon for Asian families (who sit at round tables) to allow lefties to show their real colours because if you eat with your left hand you risk elbowing the person next to you.   In traditional families, Lefties had to repress their southpaw tendencies and in the end, developed ambidextrous abilities by the time they reached adulthood.  Adapt or don’t eat, the little old Asian ladies would say.  Anyway, the silicone finger holders help place your hand in the proper position.  Later on, you can remove them if  the kids get proficient enough without them.  My kids have no inclination to remove them at all.  They’ll be 28 and still using their adult-sized Edison chopsticks. 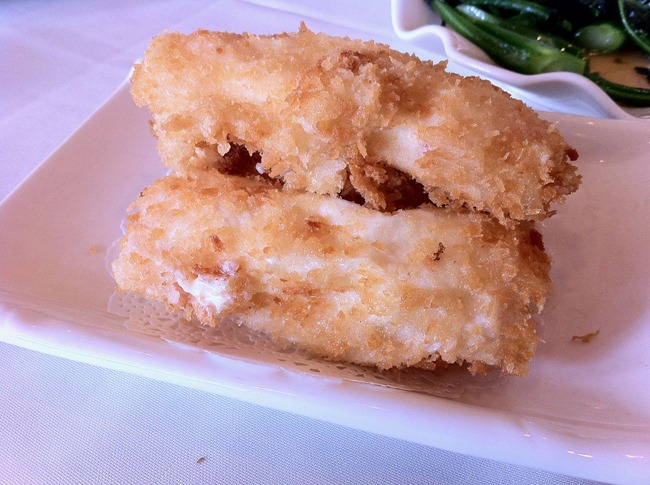 Deep fried Seafood Roll ($4.25).  Me and deep-fried.  You see, we have a special thing goin’ on.  I can’t resist deep fried.  I order at least one deep fried dish every time we do dim sum.  This Seafood Roll was wrapped in a skin that was pretty soft and you could see the filling oozing out.  I know this is how most places make it, but I’m not too keen about the softness of the skin because it makes for difficult eating.  It’s not as crispy as I would like it either.  This is because the filling consists of a mayonnaise, fruit salad (think canned fruit cocktail) and prawns mixture.   Each of these Rolls had 2 large prawns and ample mayonnaise.  It tasted good.  One of my prawns had that icky black line on it still (the intestinal tract—ewww!) so that was a turn-off...until I cut the line out with a knife and went on with it.      Cakebrain’s rating:  4/6 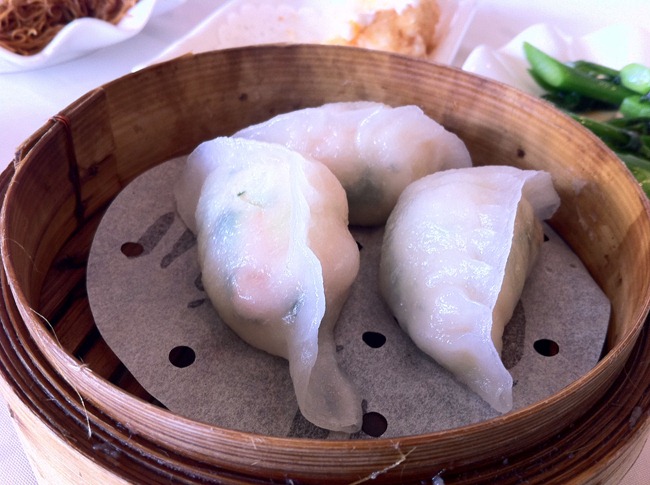 Steamed Shrimp Dumplings with Baby Bak Choy ($4.25).  I like steamed dumplings and haven’t seen one with baby bok choy so I gave it a go.  This tasted much like the chive and shrimp dumpling fillings you usually get…only with bak choy.  It was good.    Cakebrain’s rating:  4/6 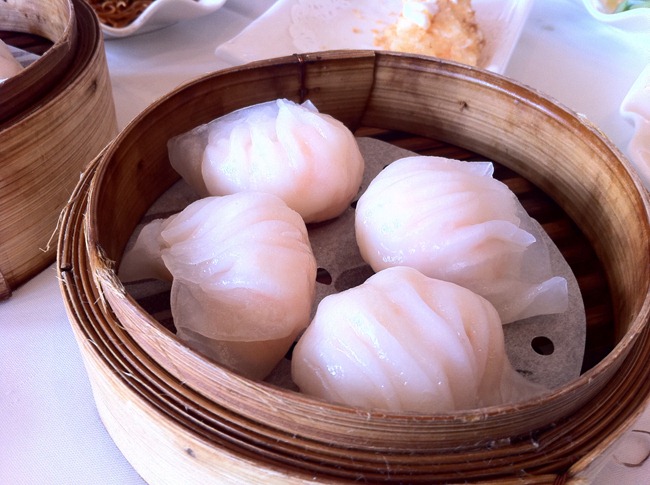 Steamed Shrimp Dumplings (Har Gow)  ($4.25).  Stomach is the expert in rating these.   He said the skin was too thick and the filling’s flavour was just okay…but not juicy enough.  He still thinks Spicy Court’s Har Gow are better.  A Chinese Dim Sum restaurant is pretty much gauged on how well they do certain classical dishes like Har Gow, Steamed BBQ pork buns, Steamed Rice Rolls and Egg Custard Tarts.   These classic dishes can make or break a restaurant.    Empire’s Har Gow are nothing too special and the dumpling skin is particularly disappointing.   Ah well.       Stomach’s rating:  3.5/6

Empire Chinese Cuisine has very good service.  We had our pots of tea filled when they were empty.  If you are a dim sum aficionado, you know that the secret code to Chinese waiters that your pot is empty is to lift the lid, peer in, and then replace it slightly off centre so that it rests askew on the top of the pot.  I like it when waiters come by to check your pots instead of having to resort to the secret code.   If they do this, and they do here at Empire, you know it’s more service-oriented and of course the restaurant is higher-end with the overhead chandeliers, rosewood chairs and tablecloths.  We have had good service each of the times we have visited so far.

You are funny! The teapot thing is hardly a secret code.