CAKEBALLS FOR A BLEEDING NOSE

One thing I have been doing as a preventive measure:  Otrivin.  It constricts the blood vessels.  Just prior to something like gymnastics, where I know they'll get hot, I'll squirt it in each nostril.  Just once.  Not even afterwards.  I only do it once a week so they don't get addicted to it.  Doc says it's okay if I don't do it more than 3 days in a row.  But I never do that.  I use it selectively for when they have strenuous activities and will get hot from working out. 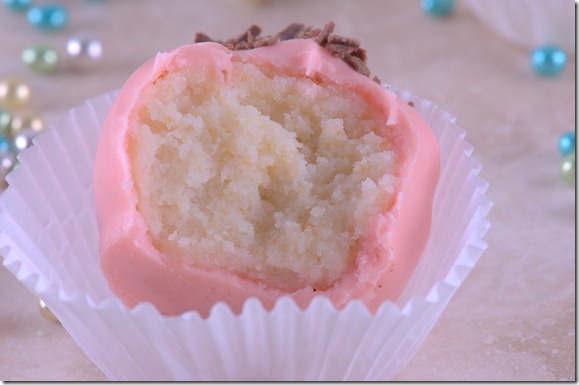 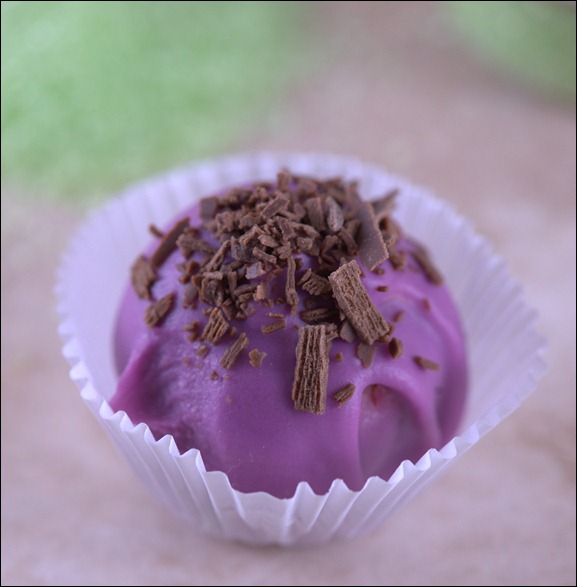 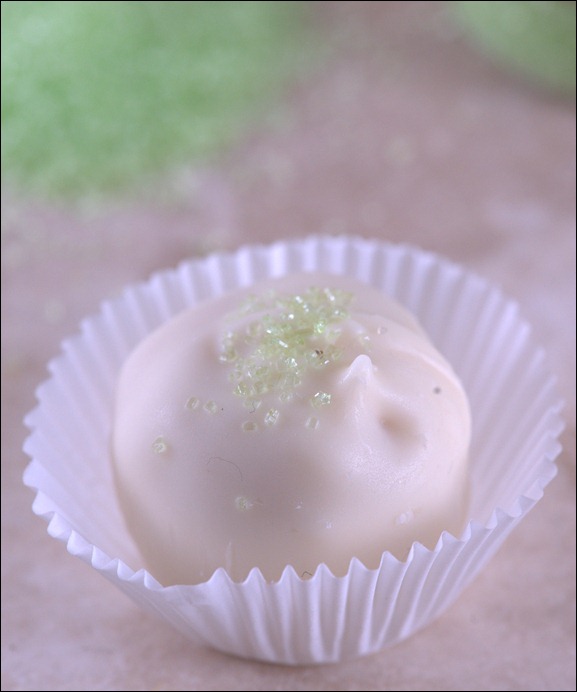 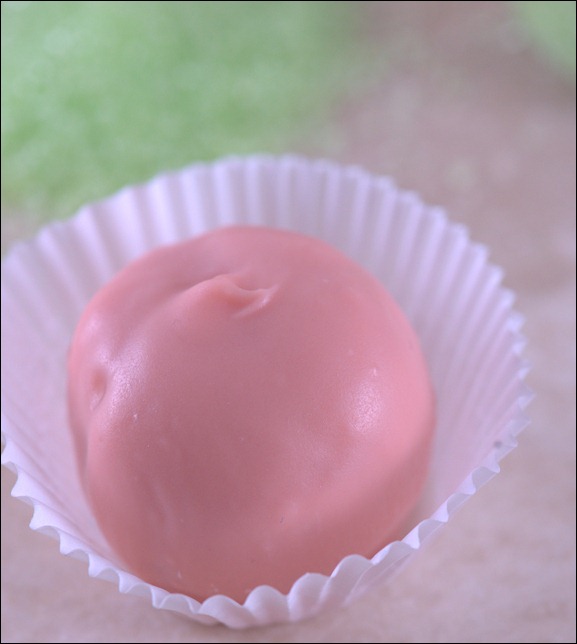 These were for the lovely secretary at Bebe's elementary school.
You see, I have a bleeder. 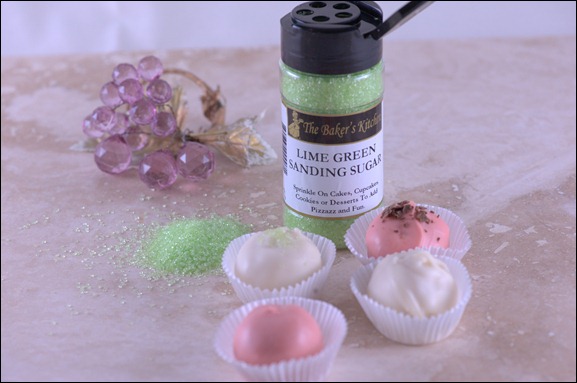 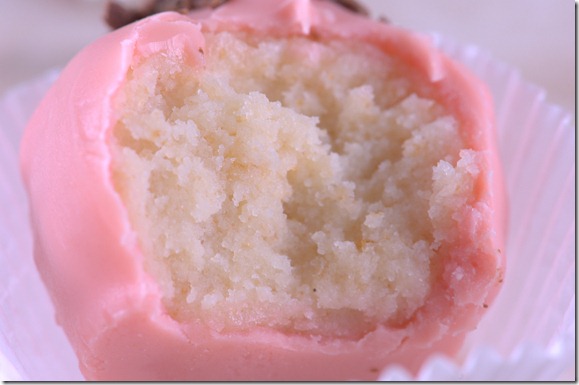 Since she was 2, Bebe has had nosebleeds.  Regularly.  Sometimes twice a week.  Sometimes everyday; especially if it's extremely hot.  Sometimes both nostrils at the same time.  She's 7 now and still a bleeder.
When she was very young, we took her to Children's hospital once...with kleenex plugs in her nose--and the emergency doc looked at her and laughed.  He didn't do much for her.  He just told us to do what the first aid books tell you.  Well, the books also say that if the bleeding doesn't stop after 15 minutes, you're to go to the emergency!  The emergency doctors don't think so apparently.  We were sent home. 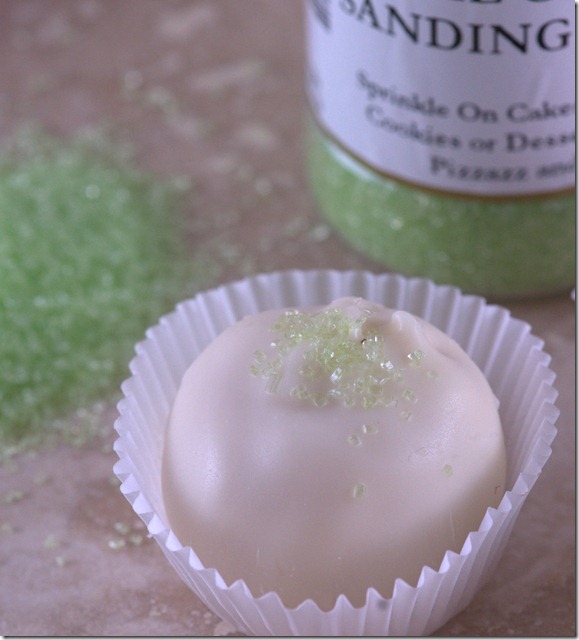 Some first aid courses and medical books say that you're supposed to pinch her nose and have her lean forward.  It doesn't work.  Her bleeding is below the place where you pinch.  And the blood backs up and goes down her throat.Yuck. 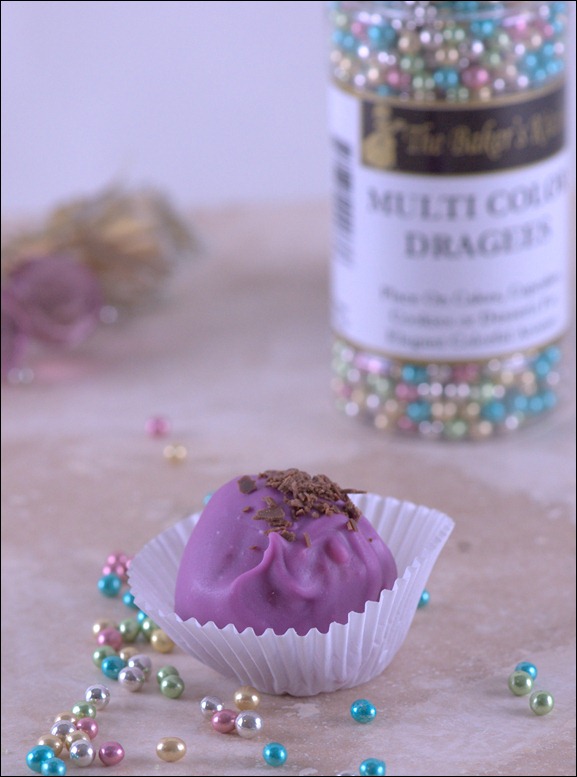 The only thing that works is the kleenex plugs.  I pre-make hundreds of them and put them in a tupperware container and bring little baggies of them with me when we go out because you never know... 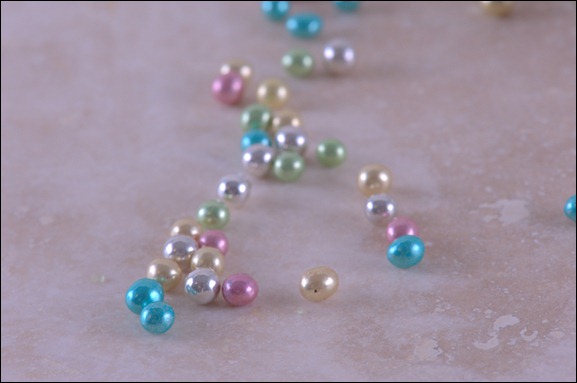 Twice a day since the age of 2, we've applied vaseline or some moisturizer (saline spray, gel spray) in both nostrils.  We've also tried premarin (I know...it's for menopausal women!)  I asked the specialist why a vaginal cream for the nostrils? and he replied it would help toughen up the tissue in her nose.  It didn't work.  We went through the whole tube--and nothing changed.  Meanwhile, I was worrying that she would sprout boobies at age 5 from the estrogen in her nostrils.
We went to Finlandia and the helpful lady told us to try Vitamin E oil.  She advocated Vitamin C and all the holistic stuff that I had already been giving Bebe.  She takes all that and omega 3 to boot.  So we tried the Vitamin E oil because you never know...and went through two bottles.  I eventually gave up because the difference from vaseline was negligible...and the bleeding still occurred. 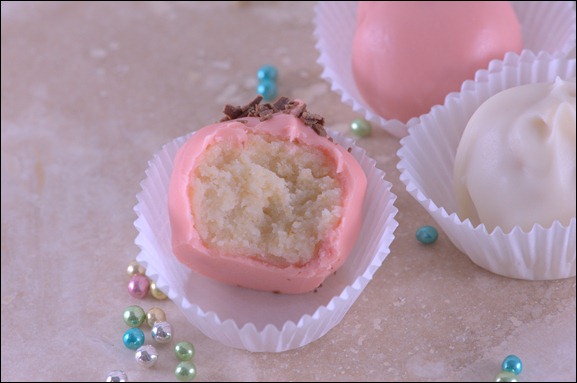 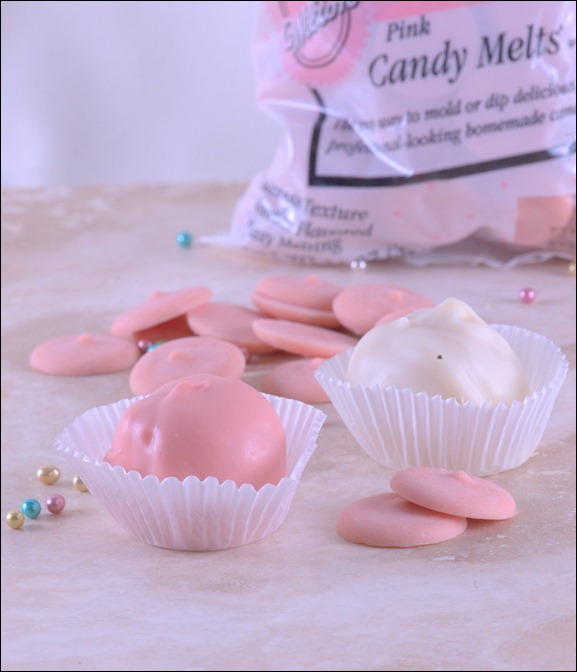 Some natural remedies we tried didn't work either.  We also employ an arsenal of things that help stop the bleeding once it starts:  we use ice packs on her, we have her drink cold water, we cool her down, we calm her down.  We place a cold towel on her forehead and/or on her neck.  You name it, we've done it. 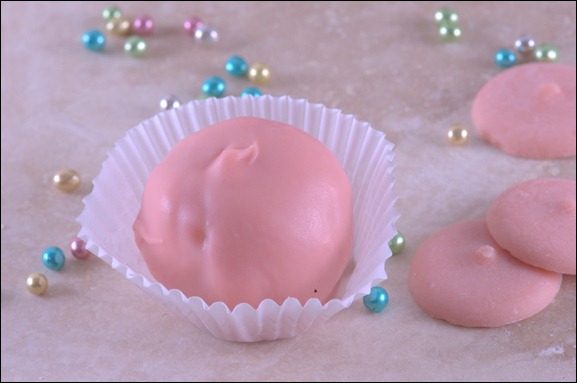 I've even used acupressure on her and squeezed her middle finger at the first joint on the opposite hand of the nostril that is bleeding.  It might slow the bleeding, but it sure doesn't prevent it.
Apparently her skin is very thin in there and her blood vessels are close to the surface and rupture easily.  The specialist says she'll outgrow it eventually.  His preferred option is to put her under general anaesthetic before cauterizing both nostrils. I'm not too keen on that. 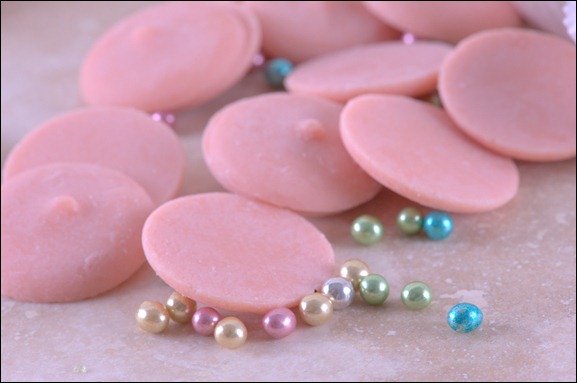 You may think this is a bummer (and it is) because it's a bother to worry about a bleeding nose when you're at karate class, at gymnastics, or if you're just running around the playground.  She's often had to go to the office at lunch because it would start bleeding.  I usually equip her with kleenex in both pockets to ensure she can make it to the office without getting all her clothes bloodied.  She's a pro at bleeders and doesn't cry anymore.  She knows how to make her own little plugs.  You have to use them in her case otherwise you don't have a free hand to attend to her other nostril or hold the ice pack etc. 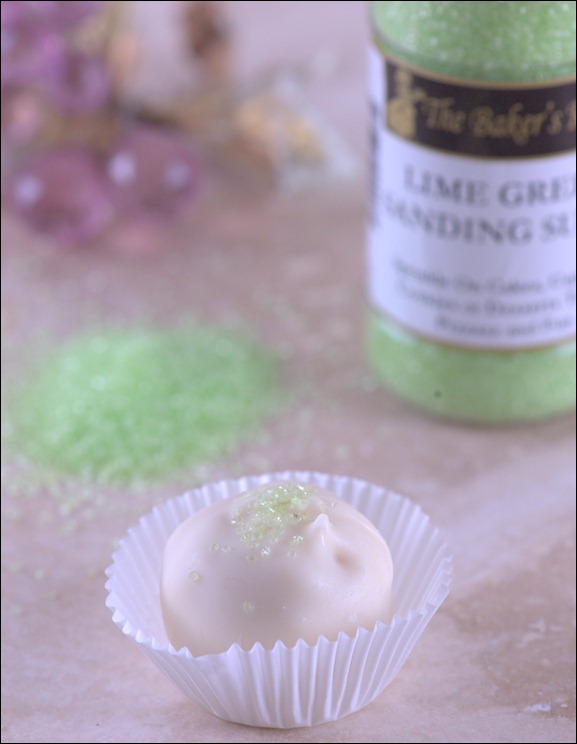 The poor secretary has called me at work to tell me it's been over 15 minutes…and I know I must sound like a callous mom on the phone when I tell her not to worry and I say it'll stop eventually.  I tell her to use a tiny kleenex plug and she says that's not the way they were trained in first aid.  I know.  I know.  But my family doc doesn't poo poo my method.  I've finally decided it's about time to get something done.  This is because Bib, who's now three and has had bleeders too since about 2 years old, is vying for attention by bleeding  just as much as her sis.  Between the both of them, I'm pretty busy plugging up nostrils.  Now you know why I need those darned plugs?  I don’t have enough hands to pinch noses, hold their heads forward and hold a kleenex under the nostrils to catch the blood.  It’s just so inefficient.  Especially when both of them are bleeding at the same time.  At least they usually have the decency to bleed at different times of the day.
And yes, I do humidify my house when it's dry.  Besides, we practically live in a rainforest in Vancouver and it's always raining.  How often is it even dry around here?  That's obviously not the problem.

So no, I don’t stuff the cakeballs in their nostrils as my title may have had you wonder.  Nor do I feed them cakeballs to make their nose stop bleeding.  The cakeballs are a thank you to the kind secretary at school who frequently has to deal with a bleeder when she  a bunch of other work she could be doing.

BTW, I am finally fed up and in a couple of weeks we’re going to cauterize.  My family doc is sending me to someone “old school” who cauterizes in his office under local anaesthetic and with a stick with some silver nitrate at the tip.    I have a feeling it’ll be a struggle to get them to allow a stick up their noses, but they’ve had enough things up their noses so they should be used to it!

For the recipe, you simply crumble a baked cake into a bowl (a mix or pre-bought is fine) add a dollop of frosting to it until it is moist enough to hold shape in your hands.  Mix well! then form balls.  Refrigerate.  Dip in Wilton candy melts.  Decorate before the melts dry.  Yum!
Pin It
Posted by Cakebrain at 00:35

I've known a few adults who had the cauterization done as children and they've all said it helped them immensely. I'm also a bleeder but never frequently enough to necessitate the procedure. I discovered recently that my husband has only ever had a bloody nose when he broke it and was totally astonished, because I thought everyone had them at least a little as children.

I love how you decorated them!

i M SORRY FOR YOUR KIDS. I m sure it will be over soon. The cake balls look fairy like and yummy :)

When I was a child, I had terrible nosebleeds, and they happened so often that I would be scared to go to bed, and have a wad of toilet paper by my bedside! That being said, I grew out of it :) and I'm sure your daughters will too soon! When I had heavy nosebleeds, I did try the saline spray, which never worked. What did work is something called Flonase, and it might be worth asking your doctor about. It's a spray as well, but works like a charm! I still use it now, once in a while, as a preventative measure when my nose feels dry.

Beautiful photos! I was wondering how you got the cake to look so moist...

You've become quite the accomplished nose-bleed handler. I'm afraid I'd have puked right on top of my kids. Lucky for them they didn't have any nose-bleeds, huh? You don't want to know what happened when one of them threw up on me...

My daughter has nosebleeds quite often though I wouldn't say chronic ones, I hope the cauterization works for the both of them and they can no longer worry about a bleed.

I must say I love the cake balls and think I'll make them for the kids class room Halloween parties later this month, I have the best little candy skulls and bones that can be used to decorate them, along with orange and black sugars. I'm wondering if you can make "rum" style balls out of them with different liqueurs for a nice "adult" treat.

I love how you decorated the cake pops! They look so cute, and they're perfect to make in advance or for a party.

thanks everyone for the well wishes for the kids and their cauterization next week! :) I know it'll be a good thing in the end.

mamaicymouse: go for it! incorporate rum into those cake balls! tell me how it goes. I think you could easily put a couple of tablespoons in, but might have to watch it doesn't get too soggy. Try a drier cake and it should be good!

I'm thinking of making cake balls for the hallowe'en party the girls are having at school too. I'll try to remember to post what I make!

I love the photos, they are terrific!
I was also a bleeder for the exact same reason and went through the vaseline, etc. At the age of fifteen, the doctor (under local anesthesia) cauterized the veins, he also accidentally cauterized his thumb. I haven't had a problem since, it was great! I'm not so sure about the doctor.

These look so pretty (as well as delicious)!

these are really pretty, they look good enough for a wedding! sorry about your bleeders, what an odd challenge! good luck with the cauterization. im sure your secretary appreciated the cakeballs.

These things look so good!! Pretty and appetizing. Definitely great for a party! Sorry to hear about your nosebleeds!

In reference to your little bleeder, I was exactly the same when I was a kid. Sometimes I had nosebleeds everyday, sometimes I'd wake up and I would have had one in the middle of the night and my bed looked like a murder scene, and I especially had nosebleeds when it was hot. Or I sneezed. Or touched my nose. Or moved.

Then I got cauterization at about 13 years of age, and I'm now 23 and have had maybe one nose bleed since then. Seriously, it will be the best thing you ever do!! It hurts for a couple of minutes and then it's all done and dusted.

Hey, your kid is lucky. My Grandma stuck bok choy up my brother's nose!!!

sorry couldn't find your direct email so hope you'll see my message. would love for you to join us here.

Hope that you can join us as a vendor at www.bakersmarket.com

Features of the Baker’s Market:

-customers who are seeking unique sweet and savoury baked goods

-great exposure to foodies, media and everyone who comes thru our market

-network with other bakers

Sign up now to get the early bird rates!

Thanks and we look forward to meeting you.

Oh my gosh this post had me laughing but also feeling so bad for your daughter! I'm sure she'll outgrow it and just think of what a tough cookie she'll be! I love how you tied in the cakeballs!