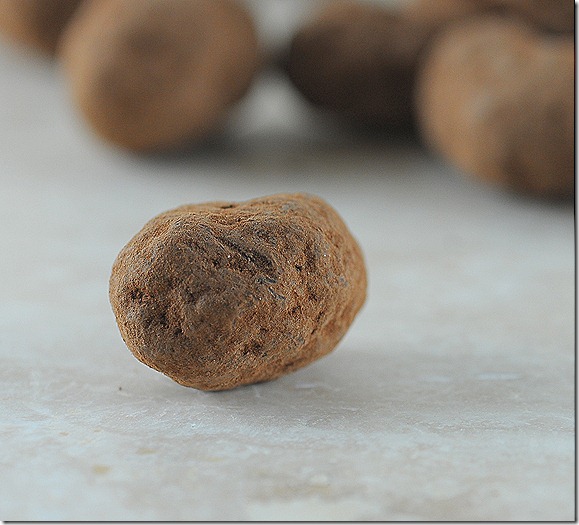 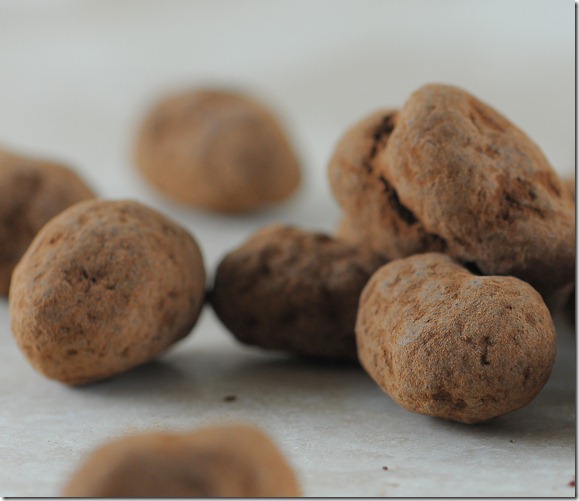 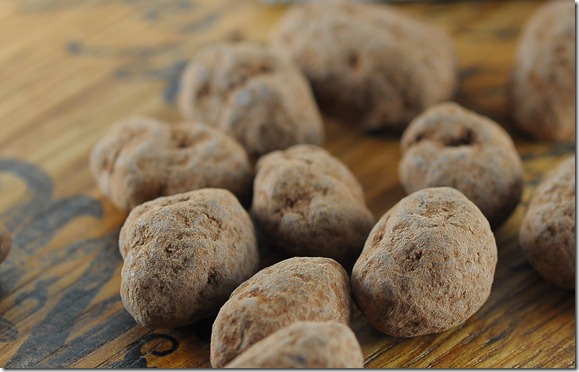 These lovelies don’t look so pretty, but they are indeed delicious. 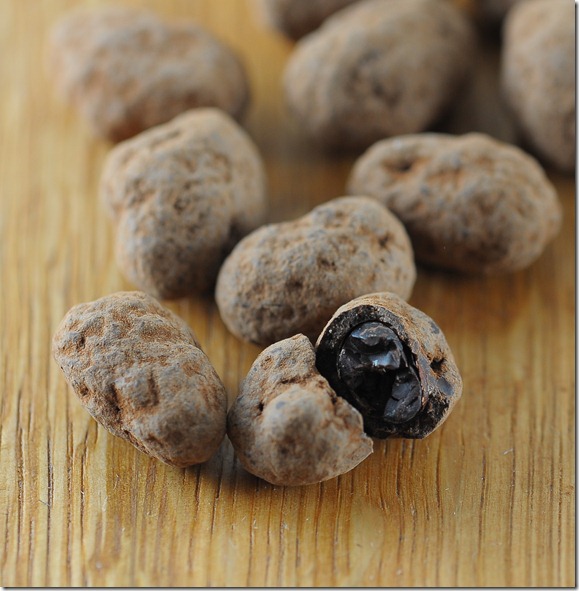 Can you tell I have a new Nikon D700 camera and a honking new lens too?  I’m still trying to figure out how this thing works… 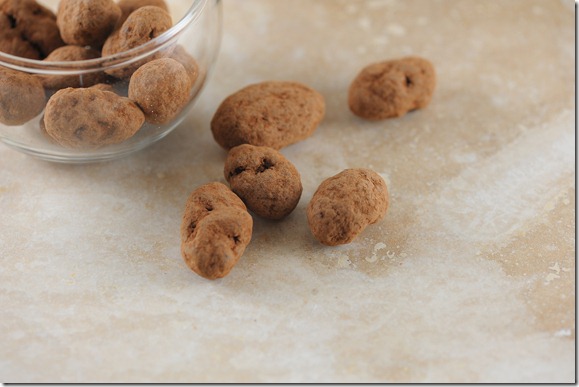 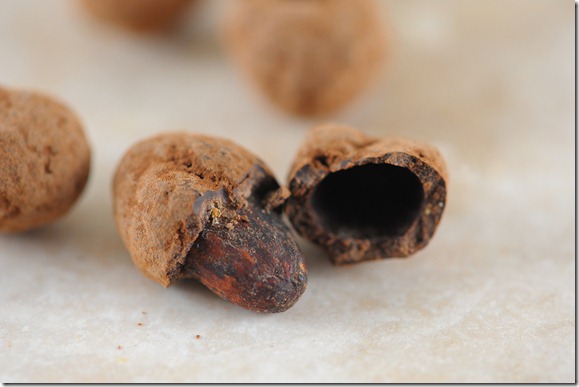 These don’t look gorgeous but they taste gorgeous.  The cocoa beans are ethically sourced and locally roasted by the husband and wife team Dominique and Cindy Duby, of Wild Sweets.

While I was at Whole Foods, lingering at the chocolate section, I noticed these artisanal chocolates.  The concept is a play on chocolate covered nuts.  The roasted cocoa bean replaces the nut and it’s covered with 70% dark chocolate infused with various flavourings and tossed in cocoa powder.

The box I bought was under $6Cdn for the little 60g box.  There didn’t seem to be as many cocoa beans as I would have hoped for, for that amount of money, but mind you these are meant to be savoured slowly.  I just had one and it was all at once crunchy and chocolatey but not as bitter as eating a naked cocoa nib.  The dark chocolate coating helped temper the bitterness and added a tiny element of smoothness.  I detected a tiny bit of the finely ground caramel. 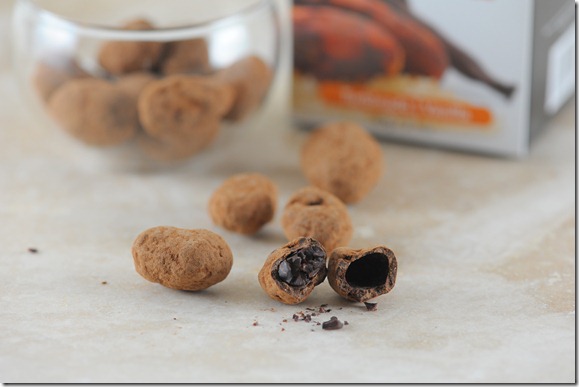 I was not so daring to try the other flavours, but opted for the safe Turbinado Vanilla flavour for now.  The other flavour available was Cassonade Chipotle.  There was also a Cocoa Nib series which I guess of course, incorporates little nibs.  The flavours were Almond Black Pepper and Hazelnut Star Anise. 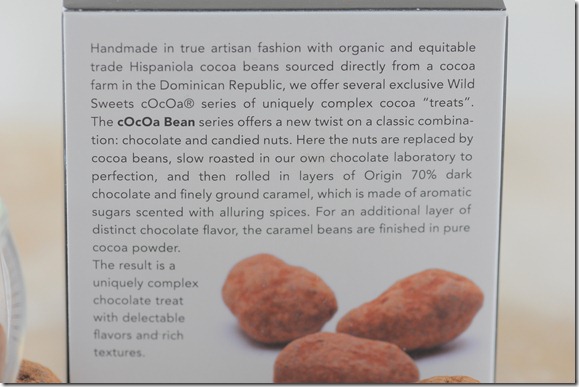 Since I have been reading Mireille Guiliano’s, French Women Don’t Get Fat Cookbook, that I recently bought for my Kindle, I have been detoxing with her Miracle Breakfast Cream and Leek Soup.  Though I had an interrupted day by attending the PNE and eating those little cinnamon-sugar donuts, I didn’t overindulge.  I lost about 3 pounds in 3 days and have now become addicted to the Miracle Breakfast Cream.  I have been eating the MBC for about a week now and I’m making my own organic yogurt at home.

The Leek Soup wasn’t as tasty on its own so I doctored it by adding chicken broth to it.  The Leeks themselves I had with olive oil and lemon juice. They were so good I think I could live on this forever.  I will be incorporating the MBC in my breakfast routine from now on.  I can’t believe how much better I feel.  I think it’s the MBC.   I actually find myself thinking about the MBC during the day and I look forward to eating it from the special little bowls I set aside for serving my MBC.  The recipe I like uses organic plain yogurt, organic lemon juice, finely ground organic plain shredded wheat cereal and walnuts, flaxseed oil and honey.  I chose to sweeten it with Manuka honey.  It’s expensive but I have had really good health eating it; especially when I have a cold.  I have 3 different bottles of Manuka honey

at home for different purposes.  The bottle with the highest Manuka Factor ( UMF 20+) I use for colds—I ordered these from New Zealand's Comvita online, and the stuff I get at Whole Foods is just UMF16+ which I use to prevent colds.  The other one is simply labelled Manuka honey and doesn’t indicate any number for the Manuka Factor and that is the one I’m using for the MBC.  I have a sweet tooth (as you know) so I use about a teaspoon.

These little chocolate covered “nuts” are so perfect for me right now.  I can control myself and not overindulge and they are so decadent!
Pin It
Posted by Cakebrain at 01:45

Wow! You had me fooled..I thought they were potatoes :) But yum..cocoa beans :D

I've been looking at the D700 as an upgrade from my D200. Do you like the camera? What lens did you use in this post? I thought you were photographing potatoes also.

Brittany,
haha! funny thing is I have an unhealthy relationship with both potatoes and chocolate!

Gale,
If truth be told, my husband buys all my cameras and lenses including this new lens and though he seemed to imply that the new lens and camera were intended for me, for my anniversary, it seems as if he is spending more time with it than I am! Mind you, he knows much more about cameras and doesn't really help me out at all other than to buy me the stuff. The macro lens is a heavy-weight! It's a Nikon AF-S Micro Nikkor 105mm 1:2.8G ED lens. Well, that's what it says in gold across the top of the lens! I know he paid a lot for it but hey, it's my anniversary! I am happier with my new setup and I'm still learning all the features.

that is neat! when i saw the first one broken open with black inside i thought there must be a problem, but nope! they look just lovely.

this is first time i have see cocoa beans...they are amazing pretty inside