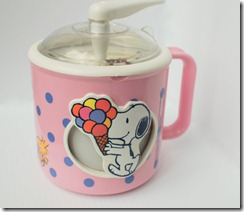 has performed admirably for me all these years.  The trouble is, the capacity of this little low-tech-frozen-canister-crank-by-hand contraption is its capacity.  I can only make two cups at any one time. 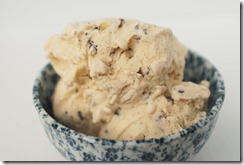 Also, when you add lovely hard chunky things like organic cocoa nibs--it becomes a pain to crank.  The ice cream created by this Donvier is not full of air (like the cheapy stuff you buy at the supermarket).  The best ice creams I’ve churned out from this trusty ol’ Donvier are custard-based.   I like the chew of a custard-based ice cream much more than the aerated stuff.

Don’t smirk at me.   It’s summer and I am working on maintaining my girlish figure so I can go buy a new bathing suit!  To make it über-yummy I went decadent and squeezed in a whole vanilla bean’s worth of seeds into the custard base.  Then prior to cranking the mixture, I tossed in some lightly toasted organic cocoa nibs in there to boot.  I dipped in a spoon and gave it a lick in the midst of cranking.  I couldn’t resist.  It was awesome!  The cocoa nibs were crunchy, chocolatey and kind of nutty.  Ice cream is the perfect place to substitute Splenda for sugar because it's hardly noticeable.  This ice cream was just sweet enough, rich, had a nice creamy mouth-feel and tasted like a gourmet brand ice cream.

Cocoa nibs have antioxidant powers and are so good for you.  The nibs I used were organic.   I can wax on about how wonderful they are, but to be brief, apparently they also have more magnesium than any other food; chromium(again more than any other food) and high levels of Vitamin C.

The ice cream looked gorgeous with all the dark nibs and vanilla flecks.   I had used organic free range eggs in the recipe.  The yolks were a deep yellow and imbued the custard with a warm hue.  With the other half of my ice cream base, I made a batch of matcha ice cream.  Green tea also has great antioxidant properties and with these two ice creams, I shall preserve my youthful glow!  That’s the plan anyway. 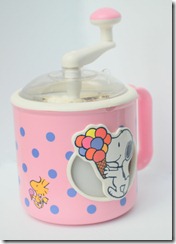 The aluminum cylinder of this Donvier must be pre-frozen before you intend to make your ice cream.  Therefore, it is advisable to leave it in your freezer all the time…just in case you have a hankering for some freshly made ice cream.  I just leave my canister in the freezer during the summer months because it takes up too much real estate in my already crammed freezer. 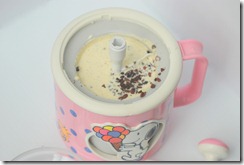 Once you’ve prepared your ice cream mixture, and refrigerated it for at least a couple of hours to cool, you take out the frozen cylinder--not with wet hands, of course! because the resulting effect will be like licking a flag pole in the winter in the Arctic.   You’ll get stuck.  Though there isn’t a big warning sign on the canister against this, you ought not to lick the frozen canister either! duh. 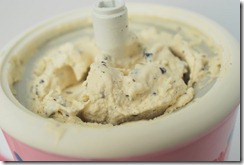 After making this ice cream though,  I was sorely tempted. 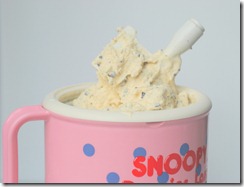 You start manually cranking the “machine” immediately after pouring in your ice cream mixture.  Just once around.  Then wait about 3 minutes and do it again.  Unlike me, you will not pour in the ice cream mixture, take a bunch of pictures and fiddle with stuff before taking the first crank.  The custard in my case built up rock hard on the sides of the canister and it was almost impossible to crank properly.  I was reefing on it and thought I might break the plastic handle.  I had to get out a spatula and carefully and gently break up the build-up of frozen custard on the sides of the cylinder a few times to get it going again. 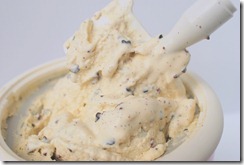 The thing about this nifty ice cream maker is there’s actually not a whole lot of cranking you have to do.  You can I suppose, keep cranking it, and thereby aerate it more.  But you don’t have to.   The whole process takes less than 20 minutes to create a decently textured soft serve.  If you want a harder ice cream, you’ll have to pop the whole mixture into another lidded container and freeze it until firmer.  I would recommend that you poke your head in the freezer and stir it up a bit with a spoon intermittently so that you don’t have a rock-hard ice cream because that has happened to me a few times when I forgot about it.  If you do forget to do this, you can allow the ice cream to soften a bit at room temperature and then start beating some air into it before placing it back in the freezer again.  But don’t screw it up again this time.  Remember to go in there ever 10 minutes to mix it up.  You’ll get a better texture and you’ll thank me that you can actually scoop it without breaking your spoon. 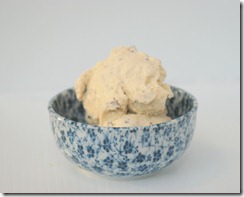 makes 8 servings (approximately 4 cups)
[Cakebrained note:  I made the custard base as below and then divided it into 2 containers to create 2 different flavours because my Donvier’s capacity is only 2 cups.   I made a Cocoa Nib Vanilla Bean Ice Cream and with the other half made Matcha Ice Cream.]

OMG. Your ice-cream maker looks so cute! I love it!

This is the cutes ice cream maker...and your ice cream and recipe are fantastic. Followed you over from
MANGIO DA SOLA:)

Oh a low carb ice cream this looks so good, and i love your ice cream maker haha!

Love your ice cream maker. It's adorable! I've been wanting to get one for quite some time now. It's on my Christmas wish list...

Haha your ice cream maker is so cute! I think you should keep it. :) And it appears to make some delicious ice cream!

Mmmm, low-sugar ice cream... that could be perfect!