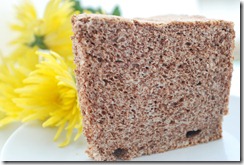 I don’t generally like angel food cake.  Often, I find it tooth-achingly sweet and the angel food cakes I’ve had in the past are often cottony and dry in texture.  Instead, I am a huge fan of chiffon cakes and have many favourite recipes I repeatedly make when I want to make a cake that doesn’t require frosting and can be eaten out of hand to satisfy my cake-tooth.

So why am I making an angel food cake if I profess to not even like them?  What is so appealing to me about angel food is its lack of added fat and the seemingly saintly virtue of having less of all the bad things like refined sugar and white cake flour (look ma, fewer calories and saturated fat!)  There is no leavening agent either.   Wouldn’t it be great if an angel food cake were so virtuous and tasted good too? and was not dry but moist? and not cottony?  or overly sweet?

Today I am embarking on an angel food cake recipe quest.  Just like my chiffon quest, my macaron quest, my chocolate cupcake quest and my epic journey with the Wilton Castle Cake

(aka Ariel’s Underwater Castle), I’ll be following recipe instructions to the letter and researching my subject matter to ensure proper technique and ingredients are employed to yield best results.  I’ll be testing a bunch of recipes from my vast collection of cookbooks and my favourite food blogs in order to find a foolproof recipe that yields angel food characteristics that I deem important:

First, I am going to give Rose Levy Beranbaum’s Rose’s Heavenly Cakes

another try with her gorgeous-looking “Chocolate Tweed Angel Food Cake”.  The picture in her cookbook  is enticing with its “Chocolate-Spangled Whipped Cream” frosting and dark chocolate garnish of Valrhona Les Perles  studded all over the frosting.  What I find particularly attractive about this cake is its name!    I like a recipe to have a creative name indicative of its qualities.  The texture seemed moist but mind you, if it’s layered and frosted with Whipped Cream frosting of course it should be moist.  I would like to eat this angel food cake sans frosting just to be purist and test whether it is capable of being eaten out of hand on its own.  I don’t expect it to be as moist and tender as chiffon, but I would like to see it come pretty close!  wishful thinking? 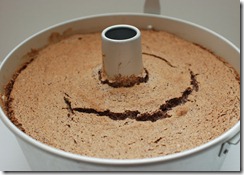 All went well as I followed the recipe exactly and weighed all my ingredients.  When I do a recipe quest, I never stray from the exact instructions.  I do not adapt.  I do not substitute.  This way I can have a better idea of whether or not the original recipe works well or not.  If it does, on subsequent testing, then I go about adapting flavours and stuff.  The instructions were easy to follow and I appreciate how angel food cake doesn’t require a whole whack of ingredients. 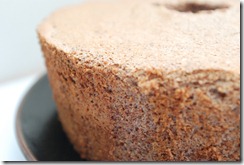 Even the baking time was brief compared to baking a chiffon.  It was almost half the time in the oven compared to a chiffon.  I brought the cake out of the oven when it was golden brown and had the deep cracks that were indicated in the instructions.  I immediately turned it upside down and allowed it to cool for about 2 hours before even attempting to try to remove it from the pan.
Hit the link for the verdict and scroll to bottom to see the recipe. 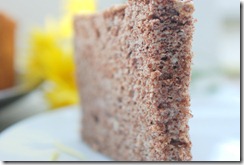 The verdict:    8.5/10 very good.
I’ve found this recipe to be worthy of making again.  I often do this just to ensure that a recipe is foolproof/idiotproof/having-a-bad-day-and-didn’t-feel-like-following-instructions-exactly-proof.    If it can endure some tweaking and adaptations that’ll be a winning thing.   Don’t worry.  The quest doesn’t end here just because I liked it.  I’ll keep plugging away at other recipes too.  I’d like to try the Cooks Illustrated

recipe next.   The quest has just begun. Beranbaum has a vanilla bean variation too which will have to be on my to-do list.

Now what I’ll like to try is finding a clean, white angel food cake recipe.  This chocolate-speckled one was neat and unique in its tweediness, but I really ought to find a white cake recipe too. 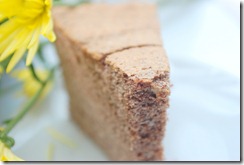 CHOCOLATE TWEED ANGEL FOOD CAKE
from Rose Levy Beranbaum’s Rose’s Heavenly Cakes
serves:  14 to 16
Batter:
Special equipment:  one ungreased 10-inch (16 cups) two-piece metal tube pan.  Long-necked glass wine or soda bottle, or a large inverted metal funnel that will fit into the opening at the top of the pan.  (Have this ready before baking and weight it by filling it with sugar or marbles to keep it from tipping.)

Prepare the sugar, flour and salt:  In a small bowl, whisk together half the sugar, the flour, and salt until evenly combined.  Sift thee remaining sugar onto a piece of wax paper.

Beat the egg whites into a stiff meringue:  In the bowl of a stand mixer fitted with the whisk beater, beat the egg whites on medium speed until foamy.  With the mixer off, add the cream of tartar.  Raise the speed to medium-high and beat until soft peaks form when the beater is raised.  Gradually beat in the sifted sugar and continue beating on medium-high speed until very stiff peaks form when the beater is raised slowly.  Beat in the vanilla until combined.

Make the batter:  Dust (lightly sprinkle) the flour mixture over the beaten whites, ¼ cup at a time (if using cake flour, sift it over the whites).  With a large balloon whisk, slotted skimmer, or large silicone spatula, fold in the flour mixture quickly but gently.  It is not necessary to incorporate every speck until the last addition.  Fold in the grated chocolate until evenly incorporated.  Using a long narrow spatula or silicone spatula,  spread a thin layer of batter onto the sides of the prepared pan to ensure smooth sides.  Empty the rest of the batter into the pan.  In a 16-cup pan, it will be ½ inch from the top of the rim.  Run a small metal spatula or knife through the batter to prevent air pockets and smooth the surface evenly.

Bake the cake:  Bake for 30 to 40 minutes, or until golden brown, a wire cake tester inserted between the tube and the side comes out clean, and the cake springs back when lightly pressed in the center.  (A wooden toothpick will still have a few moist crumbs clinging to it.)  During baking, the center will rise about 2 inches above the pan, but it will sink to almost level with the pan when done.  The surface will have deep cracks, like a soufflé.

Cool and unmold the cake:  Invert the pan immediately, placing the tube opening over the neck of the bottle to suspend it well above the countertop.  Cool completely in the pan, about 1½ hours.
Loosen the sides of the pan with a long narrow spatula and remove the centre core of the pan.  Dislodge the cake from the bottom and centre core with a metal spatula or thin sharp knife.  (A wire cake tester or wooden skewer works well around the core.  To keep the sides attractive, press the spatula firmly against the sides of the pan, moving the spatula up and down as you go around it.)  Invert the cake onto a flat plate covered with plastic wrap that has been coated lightly with nonstick cooking spray and reinvert it onto a serving plate.  Allow the cake to sit for 1 hour, or until the top is no longer tacky.  Then cover it with a cake dome or wrap it airtight.  It keeps for 3 days at room temperature and for 10 days refrigerated.  Freezing toughens the texture.  The cake is also lovely decorated simply with a light sprinkling of cocoa or lacy drizzles of melted chocolate.  Do not serve this cake with sauce as it would fall apart.

CHOCOLATE SPANGLED WHIPPED CREAM
makes: 5¾ cups /24 oz/680 grams
Make the chocolate-spangled whipped cream:  In the bowl of a stand mixer, combine the heavy cream and sugar and refrigerate for at least 15 minutes (chill the whisk beater alongside the bowl).
Whip the cream and sugar, starting on low speed, gradually raising the speed to medium-high as it thickens, just until traces of beater marks begin to show distinctly.  Add the vanilla and whip just until the cream mounds softly when dropped from a spoon.  Add the chocolate and almonds.  With a large silicone spatula, fold them into the whipped cream until evenly incorporated.  Cover the bowl with plastic wrap and refrigerate until ready to fill and frost the cake.  The whipped cream keeps for 3 days in the refrigerator.

Compose the cake: Using a long serrated knife, divide the cake into three even layers.  Spread a little of the whipped cream on a 9-inch cardboard round or serving plate and set one layer on top.  If using the plate, slide a few wide strips of wax paper or parchment under the cake to keep the rim of the plate clean.  Spread the whipped cream about 3/8 inch thick between each layer and frost the top and sides with the remaining whipped cream.  Sprinkle the top evenly with Les Perles, if using.  To get them to stick to the sides, pelt them against the sides, and they will hold in place.  If using paper strips, slowly slide them out from under the cake.
Pin It
Posted by Cakebrain at 21:53

Omg I totally understand the need to recipe quest!! Do you reckon this recipe would work as a cupcake? A good chocolate chiffon cupcake is on my list of recipes to find so I'm going to be paying close attention to your angel food quest :) Beautiful photos too!

Oh, you really are on a cake quest!! Your cake is truly lovely! I look forward to seeing what you end up liking.

Wow, your cake looks so fluffy and light...would love to try it :-)

Love your quests! Can't wait to see the recipe you pick as your favourite! You know what? I actually never tasted angel food cake and I'm so curious about it! Maybe you'll inspire me to finally give it a go!

I love quests of this sort! Waiting to see which you proclaim as the best. Maybe then, I'll try it, I haven't made angel food yet, ever!

I always use the recipe in the old betty crocker cook book. I like it because it's super moist and tender, and personally I don't find it overly sweet, but I can see how someone else might.

Measure and sift together 3 times, (I don't think that's necessary with modern flour, so I only do it once)
1 cup flour
1 1/2 cups powdered sugar

Sift the flour/sugar mixture over egg-white mixture while gently folding the mixtures together.