FOOD FOR THE EYES 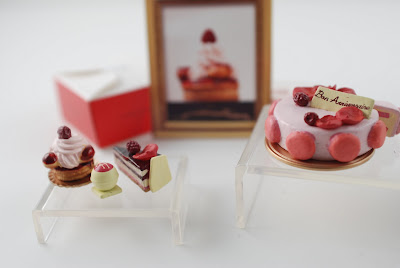 Miniature Fake Food: Pierre Herme's Collection of desserts! Mmmm. It's cute, but so not edible (a good thing if you're watching your waistline!) ;p 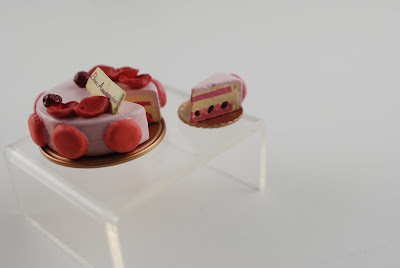 a birthday cake complete with macarons! so cute! lookit that slice of cake and the hand-painted detail!

I found another way to distract myself from eating too many sweets, now that I've told the whole friggin' world I'm going low-carb:)

I'm thinking the public scrutiny would force me to stay on track! ;p

So far, white refined stuff hasn't passed these lips. For someone obsessed with all things baked, I have found a few things to do to keep me occupied. Of course, one of them is marking :( but I also found cute food substitutes in the form of "fake food". 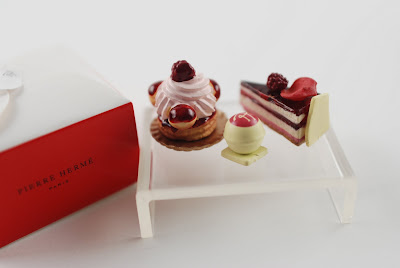 On the weekend, we had found an intriguing little store in the Asian mall, Aberdeen Centre (in Richmond). The store was full of all sorts of miniature fake food. I hadn't realized people actually bought this stuff. I mean, what can you do with it other than display it somewhere; only to have it catch dust as other chachkes do? 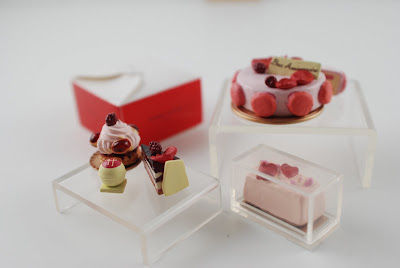 I hate dust-collectors, but I was so curious. I took a closer look and thought that it would be so cool to stock my daughter's dollhouse with some of these fake foods. They were exactly the right size. Her wooden Colonial-style doll house by PLAN is really neat and we were able to even buy a set of Asian family dolls to live in it. I made some FIMO food, but we certainly didn't have any of the cool stuff that this store had. I have no idea what you'd do with this fake mini food other than use it in a doll house. I guess there must be a lot of people out there collecting this type of mini food? The store had all the various sets on display: a barbeque set, complete with tiny ketchup, burgers, shish kebabs; a Japanese sushi set complete with nigiri, cones and sashimi; grocery store staples, junk food and practically any kind of food you can think of! Even Pierre Herme's pastries! I was so excited when I saw the collection there complete with macarons and everything! 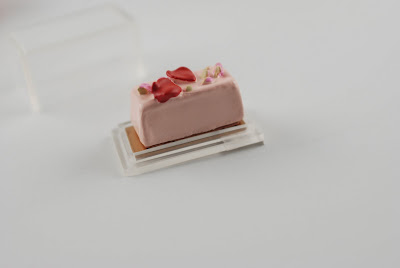 I had to have it.

So, for the exorbitant price of $12.99, I purchased a set that included a mini little pastry box, a mini Pierre Herme shopping bag and an array of desserts complete with the display stands. You even get a wrapped individual little "chiclet"-type piece of chewing gum in the box. I suppose that explains the target market! 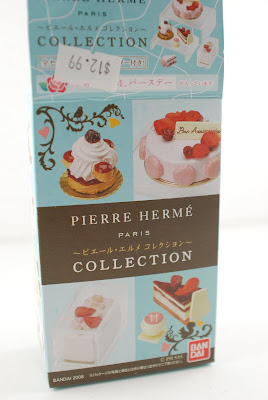 These are my favorite, being in Japan they have shops everywhere... I was reading, where did you buy yours?


They are just adorable, right?

Those mini desserts are so cute! I'd almost tempted to pop one in my mouth, if I didn't know they were fake. :)

I have the entire collection of those! They are all incredibly adorable. The only one I've taken out is the little heart-shaped Ispahan from the Valentine set, so I could use it as a temporary cupcake topper for some Ispahan-esque cupcakes.

My goodness... Is that an ispahan pave/buche? Totally cute! Good that your daughter has a dollhouse so it's not purely frivolous spending :P

How cute! surely they wouldn't be too caloric if they were real desserts. Size does matter :)

Those are sooo cute! Though like you, I'd consider them dust collectors! :)

A baker going low-carb. I'm impressed! I think we all could use a little more Hermes in our life!

okay everyone,
Blogger is driving me crazy. When I tried to publish some comments, I got a huge "Error" page and some of my comments have disappeared. But then now some are back. I'm hoping this is resolved and they all get published eventually...it's driving me crazy!

Girl Japan,
I purchased these at "Mini Shack" at 3400 Aberdeen Centre, 4151 Hazelbridge Way in Richmond, B.C. Yup, everything they had was made in Japan as far as I could tell. It must be a pretty big thing over there! This is the first time I've even heard of the phenomenon over here!
Pleasure Palate, Mark, Natalie, Y and Apples and Butter!
Yay! your comments have popped back onto my screen here. Hee hee. This is as probably as close as I'm ever going to get to having real Pierre Hermes goods.

Anna,
Wow! you actually have the entire collection? I wanted them all, and they were available, but of course looking at the price, I didn't want to buy them all at once. What do you do with them? are they on display or hidden away somewhere in a dollhouse?

Awww.... those are adorable, super cute, japanese ...they have minis of everythings ;)

Just discovered your lovely blog and was entranced! I spent an hour just going through and looking at old recipes and your beautiful photos. I am not gifted at baking, but am such an admirer of those that are. Lovely blog, enjoyed all you shared!

That is so cute, though I am not sure wether I'll remember that is actually not edible!
Cheers,
Elra