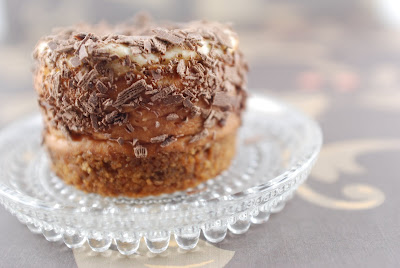 i resolve to eat more cheesecake: low-carb mini cheesecake, to be exact


I apologize for the long bouts of nothingness. I am finding it difficult to post about desserts because I'm struggling with trying to start the new year by eating healthy. That means I have to cut back on my sugar intake. So far, I've gradually weaned myself off eating lots of sugar.

However, my food blog has suffered greatly since going low-carb. It seems almost impossible to maintain a food blog concentrating on desserts when you're watching what you eat.

But, I have found a way around this dilemma.

I'm going low-carb. No! don't go running away so soon! I do promise desserts! Some with sugar even (these will be donated to a worthy cause...my co-workers). However, I'll be adding low-carb desserts too.


For the next little while, I'll be posting more recipes for low-carb desserts. After my first baby, I gained over 60 lbs. Yes, 60. I know that you're only supposed to gain 25-30 pounds, but I had a thing for fruit. Especially watermelon. I ate healthily. I didn't eat fried stuff or junk food. But I ate a lot of fruit. All that sugar just turned into fat. My baby wasn't even that big. It took 2 years to get myself down (slowly and steadily) down to 10 pounds over my beginning weight. When I hit a plateau...and I hit several, I decided to go low-carb and eliminate all sugar and white, refined foods. This allowed me to come down to those last 10 pounds over my starting weight.

Before I could lose those last 10 pounds, I decided to have my other daughter. So it goes. Now, she's 2 and I'm kind of stuck with an extra 10 on top of the 10 I never lost. All in all, I want to get rid of those 20 pounds so I can fit some of my old skinny clothes. I'm frugal. I'm not throwing those clothes away! I buy pretty nice stuff and some of it is hardly worn. Most of the styles are timeless too.

Some people might say that I was too skinny to start off with, but I don't think so. I was within a normal BMI range and I'm Asian...which means I was just right. Some of us have small bones, you see. It's not as if you can compare all people around the world with the generally Caucasian-centric stats. I learned this goes for looking at your baby's weight and height too. Everyone's so into comparing their babies with the percentile rankings, but forget the numbers used are primarily based on Caucasian kids.

Since Chinese New Year's I've decided to commit to this Low Carb way of eating. No, I'm not going Atkins (though it did work for me the first time). I'll be eating some fruit and veggies and I do cheat with little rewards when I've been good. It'll take me longer, but at least this way I might be able to stick to it better. 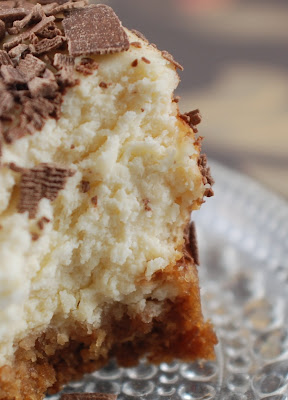 Here's my first little reward. It's a mini cheesecake. I replaced all the sugar with Splenda. The cheesecakes are so little (portion control!) and taste quite nice with the dark chocolate. I thought of dipping them in low-carb ganache, but it was getting late so I didn't bother. The mini cheesecake was gone in 5 little bites. It was just enough to get me through a sugar hump. Now I'm good. I washed it all down with some green tea and I feel good!

Okay, okay you geeks out there who cringe when they see Splenda...don't use it. If you're so against Splenda, go here and use sugar instead! :P However, I find Splenda does work out quite well considering. Baked goods come out generally drier (of course, because sugar acts like a wet ingredient in baking); but like I always say, it'll do. For a person who shouldn't be eating dessert, there's got to be some sort of a yummy reward. That's my motto during this low-carb era: it'll do! It's better than eating all that sugar and having my body go on a sugar high. I find when I haven't had sugar for a while, my body adjusts and I find I don't crave it. 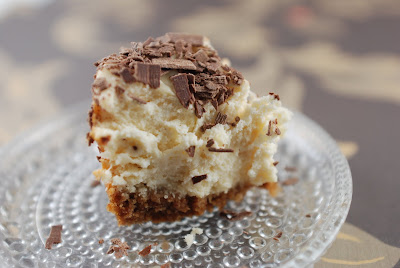 LOW-CARB MINI VANILLA BEAN CHEESECAKES
adapted from Williams Sonoma recipe on the back of the bakeware box
For the Crusts:

For the Filling:
16 oz (500 g) cream cheese
2 eggs
1/4 cup (60 ml) heavy cream
1/2 cup (125g) Splenda
[i added a vanilla bean, split; seeds scraped out and added to the cream]
pinch of salt
For decoration:
I used dark chocolate shavings, but you can use seasonal raspberries, strawberries and pitted bing cherries
Pin It
Posted by Cakebrain at 22:42

I just don't believe it, I just don't no carb, low carb? Really? The presentation is fabulous, btw can you ship one to Japan?

these mini cheescake are so cute and so delicious!

This looks delicious, glad you found a way to incorporate dessert into your weight loss!

These look so cute can't wait to try.

Gotta love cheesecake!
Could you make meringue-based desserts? Not much in the way of carbs there, and you can lighten the sugar in most recipes and the meringue will still be somewhat sweet.
My favourite meringue-based dessert is Pavlova (from New Zealand). I suppose if you skip the cream and sugar, and use half the amount of fruit, you'd have a very satisfying and healthy dessert!

I can totally relate as my food blog is suffering big time because I am on a diet.
Good luck with the last 20lbs you want to lose and I will live vicariously through you and the low-sugar/carb desserts as I am off those for the next couple of months.

Absolutely creamy and heavenly. You know I really have to give splenda a try!

Saw the words "low carb" by the cute cheesecake photo on Tastespotting and had to come look! I am a LC baker/dessert maker, and it's so nice to see others practicing healthy sugar-free cooking. :)

So happy to hear that you are doing what you feel is best for YOU and going low carb. You will fit into those skinny jeans in no time. A little bit of fruit and treats like these can really make this way of life easier! Best wishes.

I think it's terrific that you'll be posting low carb dessert recipes!

Delicious! This is the kind of dessert that makes me happy for a whole week after eating it.

Girl Japan,
You've got to try one of these little critters...low carb ain't so bad! Yup, I'll send you one!
Mary,
they're small! so I don't feel so guilty!
Sara,
You know I can't survive without my desserts!
Netts Nook,
Yes, you ought to give them a try...they're easy to make too!
Bigspoonbakery,
Now pavlova...that's an interesting idea...
Rhonalala,
may the force be with you in your diet
Nazarina,
Do try Splenda. It's not so bad as people think. Well, if that were the case there's a lot worse stuff I've been ingesting thus far in my life!
Lauren,
Your sugar-free blog rocks! Very inspiring indeed!
Caddie,
thanks for letting me know that my audience is interested in low-carb desserts!
Clumbsy Cookie,
Yeah, they are kind of tiny and it's easy to inhale 4 or 5!
Cherie,
It's nice after eating something rich like this that you feel not so guilty at all...and your body thanks you too!

I WISH I liked Splenda! Sometimes, if there are a lot of other flavors in a dessert, I can trick myself into not tasting it.I may have to try this one. Nothing wrong with trying, right?
Oh, and thanks for that terrifying heads-up about fruit. All this time I thought it was a "smart" snack. So much for that!

I am also trying to eat low carb food, however, making smaller ones won't help me. They look so tempting.

low carb desserts are always welcome :) I know my mother in law will love this recipe.

Oh man! I've missed you badly and now I find there might be a drought of sweet treats from you! Well, I'll be following, even if it's for healthier options-- I could use a little restraint myself! It won't feel that way with these little goodies though (though I dunno what'll stop me from eating 4 in one go).
Good luck on the diet!! :)

Those mini cheesecakes with the chocolate shavings look great!

Chic Cakery,
yeah, I was disappointed to find watermelon has a high glycemic value...and so do most of the fruit I love to eat:( I guess it makes sense...fruit are sweet and high in sugar.
Ivy,
good luck with your low-carb eating too! sometimes it's so hard isn't it?
Kate,
If she loves cheesecake, she'll love these mini ones!
Mark,
hey man, I've missed you a bunch too! you're so lucky to be young and you still have your metabolism...so I'll just live vicariously through your foodie adventures!
Kevin,
chocolate makes everything better, doesn't it?

Stumbled upon your blog in the middle of a "Oh my God it's 4th of July and I have to have a dessert" moment. These are awesome and got me through the holiday without major carbs! (BTW- Splenda makes me sick so I subbed xylitol and liquid stevia mixed--worked perfectly).

Oh! And I used almond meal instead of graham crackers for the crust (lower carbs).