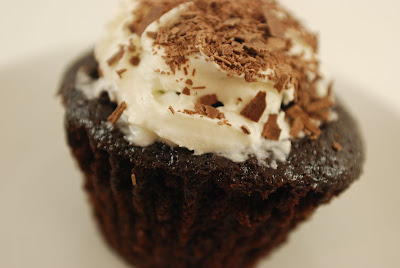 black forest cupcake with cherry pie filling
Am I the only foodie willing to admit to liking canned whipped cream?
You know...the aerosol whipping cream that you shake and the nitrous oxide aerates the cream, dispensing a frothy white mass much like shaving cream...

As a kid living on the East Side, during the summers of my formative years, I spent many hours catching grasshoppers, squirting spiders with water bottles and digging about in the huge tract of land my Motel-owning parents called the backyard. Wearing a cotton tank and shorts, I'd come inside from a full day playing in the sun. These were not the days when parents worried about applying sunblock on their children; nor did people fret so much about allowing their kids to play out in the yard or even the neighbourhood, alone. I'd grab from the old frost-encrusted freezer a little plastic cup of ice cream. These "sundaes" came with a bunch of wooden spoons that you'd use to scoop your ice cream. The flavour pack came with a variety of chocolate or strawberry swirl. My favourite of course was the chocolate. You'd peel off the waxed cardboard lid from the cup and lick off any ice-cream clinging before digging in.
The best part of all was licking the insides of the cup and sucking on the wooden spoon at the end. The woody taste would linger in my mouth and this I would forever associate with the flavours of summer. Once in a blue moon, I would have the opportunity to eat my ice cream sundae with whipped cream from an aerosol dispenser. Oh my. That was kiddie heaven.
Seeing those aerosol cans in the dairy section of the local Safeway, I was instantly reminded of those carefree childhood times.
Who didn't toss back their head and aim the nozzle straight into their mouth? at least once?
When I took my can of whipping cream to work, a colleague reminisced about how his group of friends used to hold the can upright, under their noses, dispensing just the nitrous oxide. You get the drift...they were left with a can of cream. But they had a few hoots. It was worth it. That, I never did try because well, what a waste of whipped cream! 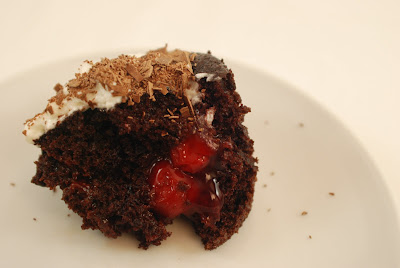 I figure summer treats should be easy to assemble, light and delicious. My Black Forest Cupcakes were so good. The cake recipe I used was from the Barefoot Contessa recipe I so often turn to. I used jumbo paper liners to make 24 cupcakes. I baked these for 25 minutes. The crumb is light, tender and moist. I cut out a large cone from the top of each cupcake before drizzling Kirsch inside. Then I scooped about a tablespoon of prepared cherry pie filling in each cupcake before placing the cupcake-cone tops back on. 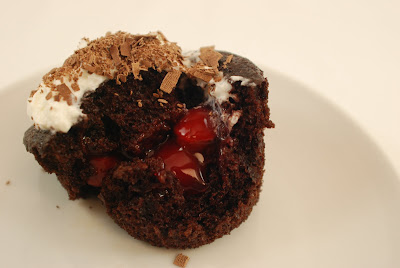 the cherries are little red jewels of puckering sweetness

The cupcakes at this point can be refrigerated until you're ready to serve them. When you're ready to serve your cupcakes, you bring out the trusty old aerosol whipping cream and swirl a beautiful glob on the tops of the cupcakes. I sprinkled shaved dark chocolate over the whipped cream before serving. I suppose a whole maraschino cherry is not inappropriate either for a topping and would be so bling bling for this little cupcake. 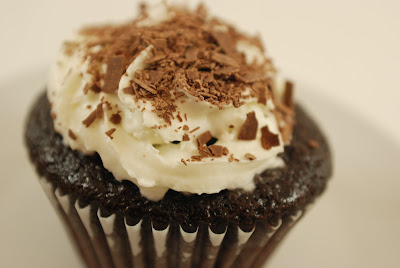 Amazing!! My husband will do anything for a piece of black forest cake. Wonder what would happen if I made these?

Ah, with your words you've really captured well the joys of being a kid in the summer (not that I was the kind of kid to play outside, hahaha!). Aerosol cream was not a luxury that could be found here back then-- in fact I've never used it, though I've probably eaten it tons of times at the soda fountain. For me, though, it comes out too stiff to be used for anything but embellishing treats, but it is fun :) And what a treat you've embellished here! Nice cupcakes!

Such a great idea - I thought of making a black forest cake for an event this week but I really like this idea so much better.

What a great idea for a cupcake! Looks delicious!

I think even the snotty food bloggers out there even enjoy a can of Rediwhip tooo!!! Sometimes, I spray it on a plate and just eat it alone! Well done cupcakes!!

I will also admit to liking whipped cream from an aerosol can! I wish I could like buttercream, but its way too rich. It kills me when the coworkers reach for the whipped topping/cool whip desserts though!

ohmygoodness that looks like the most delicious cupcake ive ever seen. I'm making them for my boyfriends birthday next week! I hope they turn out half as good as yours look!

As you obviously like chocolate a lot you should try out for this program, www.matchstick.ca/dove.
Just fill out the survey and if you qualify you get a lot of free chocolate!

haha.. Thanks for sharing your childhood experiences with aerosol cream. I admit i ate tons of it as a kid too... and straight out of the can. hahaha. Zee finest!! hehe.
I loove your black forest cupcakes.. and with half a can of whipped cream on it, even better! :-)

I used to love those ice cream tubs with the little wooden spoon. They don't seem to do wooden spoons anymore, just plastic ones, which aren't the same at all, in my opinion! Those black forest cupcakes look yum!, especially with the surprise cherry filling inside.