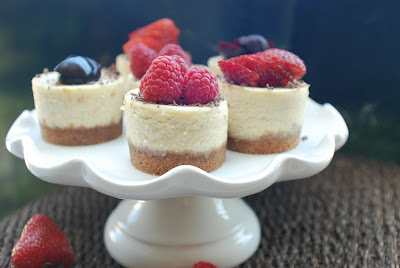 Yay! And kids think they're happy to get out.

Where's the first place I headed right after school on Friday afternoon?

Williams Sonoma. I thought that if I drove down Granville Street on the way home, and there "happened" to be a parking spot, it would be some sort of karmic thing and it was meant to be that I go shopping. I wasn't going to cheat either by circling the block a few times. Just one shot.

Lo and behold, I found a spot off of Granville on a little side street with shady trees. I only had to walk one block and I didn't even have to cross any streets. Zowie. That's baking karma. 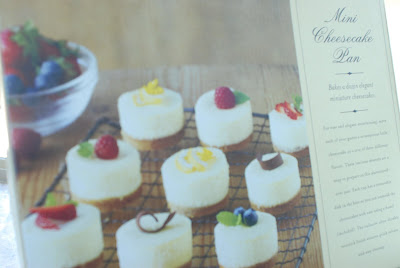 on the back of this box is a recipe for cheesecake that is supposed to fit the capacity of this baking tin. i ended up having about 1/2 a cup extra cheesecake filling.

I zeroed in on the bakeware section first as usual, to see if there was anything new. I saw some really neat baba molds. The charlotte molds were so cute too. What caught my eye though was a single box left of the mini cheesecake molds. I thought these would be more versatile. 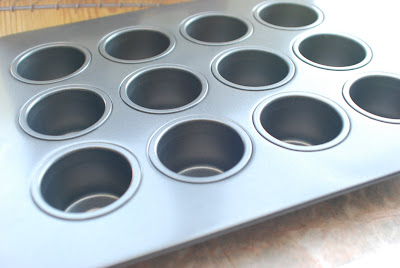 these nonstick mini cheesecake molds have a removable base. they even provide a dowel for the purpose of assisting unmolding.

I was hoping to find some nice plates. I've been eyeing the French-made Pillivuyt line of dinnerware: the rimless white dishes made of porcelain. I haven't yet been able to legitimize buying a set of these dishes, though I yearn for them each time I go into this store. You see, I have a perfectly fine set of white IKEA dishes. Yes, Ikea. The thing is these Ikea dishes are so darned resilient. I haven't broken or chipped any and I'm beginning to wonder how I'm ever going to break them all require a new dinnerware set. 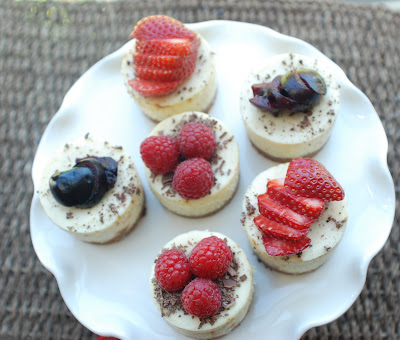 In the end, after circling the aisles a couple of times, I settled on this ceramic ivory cake stand with ruffles. It was so adorable. I hardly ever make cakes this small. But, now that I have this cake stand, I really do need to start! 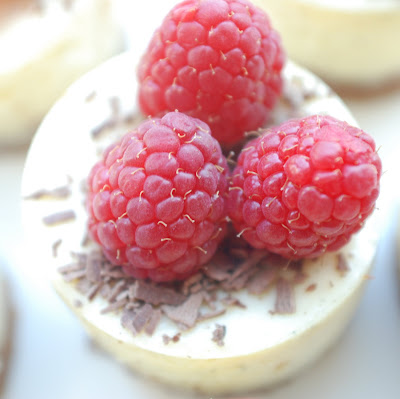 I was very happy with the performance of the mini cheesecake pan and in the future, instead of a baked cheesecake, I may do a refrigerated one using gelatin instead so I can incorporate fresh fruit into the batter: like mango! As well, I was thinking of making other pastries and desserts with this nifty pan. I was thinking of making mini mousses using a biscuit joconde for the base, flavouring that with some syrup and then topping that with chocolate mousse. I'll have to see if that idea is feasible for these tiny molds. 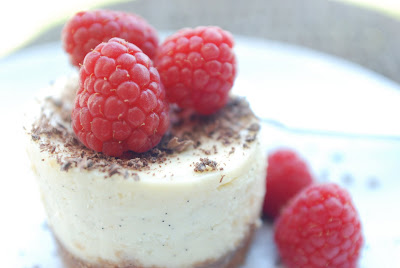 Oh, looking for interesting new bakeware... That's a habit of mine too! :)
The cheesecakes look great, I love raspberries of course :) Some of my pastry friends also vouch for punching rounds out of a giant cheesecake rectangle... I can't remember if you'd have to freeze it first.

What a fun way to treat yourself!! Your mini-cheesecakes look scrumptious!!

I love that pan! I would buy a new baking/cooking item for everything I make. I think I would run out of storage space though.

Can I come over and just lick it?

What cute little cheesecakes. I love how each one has been decorated differently.

They're so cute and perfect!!

I love these little cheese cake tease cakes. Do you think they would freeze pre garnishing with fresh fruit?

Hi Giz,
Yes, I'm sure these little morsels would freeze well without the fruit toppings. Just wrap tightly in plastic wrap and put in a ziploc freezer bag. The trouble is, they're so tiny that I didn't have any left over to freeze!

These are lovely! There's something incredibly appealing in miniature
desserts.

Those mini cheesecakes look great! I like that individual serving cheesecake pan.

I have made mini cheesecakes before. They are so cute! Who doesn't love bite-size desserts? Yours look awesome. Great blog.

i love this site! the second i read the title i knew i would. have linked to you on thecakeandtheknife.blogspot.com check it out x cant wait to try out some of your recipes.

Lovely. I've never seen a mini-cheesecake pan. Thanks for sharing.

I want a mini cheesecake pan really badly but when ever I remember to get one they don't have anymore. I will definitely have to find one now. These look great!

These look great! Ive been looking for mini-cheesecake pan at The Bay and Zellers but they didnt have any.... where did you get yours?

Theresa,
I purchased my pan at Williams Sonoma a while ago.

I've never seen such a cute and fruity cheesecake! You're skills are amazing (: I love cheesecakes, but I've always bought them because I don't have the right utensils or the courage to make one.
I think I will go to Granville and buy a cheesecake pan and try it out (:

Looks a great recipe, thank you - just a question on the "2T" is that tablespoons?

I made this recipe for a 9' cheesecake and was wondering if i use 2 bricks regular cream cheese and 1 brick light cream cheese (recipe and a half) will this effect the cheesecake???

anon,
Yes. This recipe above is designed to fit the size of the mini cheesecake pan indicated. You should find a recipe for a regular cheesecake pan if you want the bigger size. Otherwise, baking times will vary. If your question was concerning the substitution of light cream cheese...yes, the texture will be different.