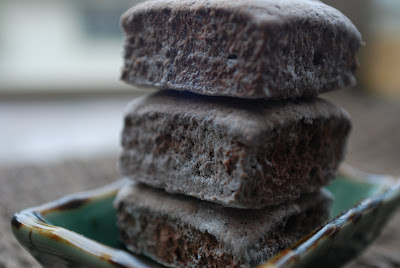 Bebe loves marshmallows. She can pop back a few in a blink of an eye.
Until just this year, I didn't even think to make marshmallows.
I found a marshmallow recipe in Dorie Greenspan's cookbook, Baking: From My Home to Yours, and chose a bittersweet chocolate variation. I used VanHouten cocoa powder and Lindt 70% dark chocolate and the chocolate flavour rang through very clearly. 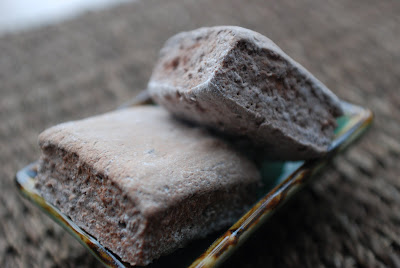 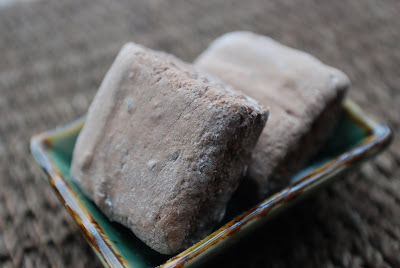 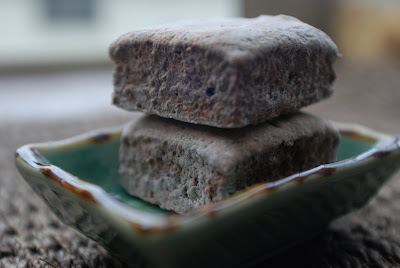 I cut them in little squares and they were so light, airy and soft that you could easily eat the whole pile of them. The chocolate flavour was a winner and I'd make these again!
BITTERSWEET CHOCOLATE MARSHMALLOWS
(adapted from Dorie Greenspan's Baking: From My Home to Yours)
About 1 cup cornstarch
3/4 cup cold water
1 1/4 cup plus 1 T sugar
2 T light corn syrup
2 1/4-ounce packets unflavoured gelatin
3 large egg whites, at room temperature
1/4 t vanilla extract
3 ounces bittersweet chocolate [I used Lindt 70% dark]
2 1/2 T unsweetened cocoa powder [I used Van Houten brand cocoa powder]
Pin It
Posted by Cakebrain at 21:28

I've been very skeptical of choc marhsmallows because of the non-chocolate-tasting choc marshmallows of Kraft (I haven't seen the "assorted" mallow in a while-- have they been pulled off the shelves?), but your glowing testimony is making me reconsider :)

Gosh, do those ever look good. I love homemade marshmallows!

Those chocolate marshmallows look great!! Making your own sounds like fun.

We just did this recipe for TWD a couple of weeks ago. I loved it! I made a bittersweet / white chocolate mixed marshmallow. Yours look lovely!

these look very interesting and delicious I'm sure.

Actually, if you use powdered sugar, it tastes much better than cornstarch and does the exact same thing. Plus then you can dig in right away without a dusty texture. :) I've never seen a chocolate variation. Very nice!

I have never tried making marshmallows but these are inspiring! I love the idea of adding chocolate to marshmallows.

I love making marshmallow although I don't usually eat it. But this one? This one looks good...

So I found your blog on tastespotting while trying to fid a recipe to use a bunch of marshmallows I have, but instead, I found a recipe for marshmallows! These looks sooo good and I will have to make them!

1. Lightly spray a 9-by-13-inch glass baking dish with nonstick cooking spray. Sprinkle gelatin over a small bowl filled with 1/2 cup cold water; let stand to soften.
2. In a heavy bottomed saucepan, mix together sugar, corn syrup, hot water, and salt. Place over medium heat and cook, stirring, until sugar has dissolved. Continue cooking, without stirring, until mixture reaches the soft-ball stage, about 240 degrees on a candy thermometer. Remove from heat and add gelatin mixture; set aside.
3. In the bowl of an electric mixer fitted with the whisk attachment, beat egg whites on high speed until stiff peaks form. With the mixer running, slowly add sugar mixture. Add vanilla and continue beating for 10 minutes until the mixture looks like marshmallow.
4. Transfer marshmallow mixture to prepared baking dish and spread evenly. Spray a piece of parchment paper with nonstick cooking spray and cover marshmallow. Let stand overnight.
5. Remove parchment paper and invert marshmallow onto work surface. Trim 1/4-inch from edges of marshmallow. Cut marshmallows into 1 1/2-inch squares. Pour cornstarch in a bowl; working in batches, gently add marshmallows and toss to coat.
6. Line a baking sheet with parchment paper; set aside. Working with 1 marshmallow at a time, insert skewer into a marshmallow and dip in fudge until coated on all sides, removing any excess from bottom of marshmallow; place on prepared baking sheet. Repeat process with remaining marshmallows (you will have some marshmallows left over). Let chocolate covered marshmallows stand at room temperature overnight before serving or transferring to an airtight container for up to 3 days.

anonymous,
thanks for the recipe!