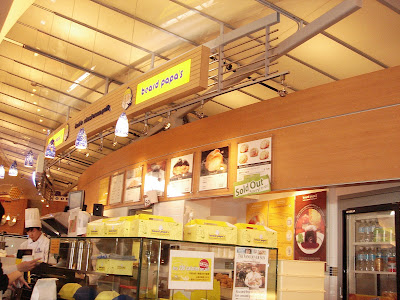 While shopping at our local Asian mall, Aberdeen Centre, Bebe and Bib required a big snack.
Fortunately, the line at Beard Papa's wasn't so long this day. I thought it a perfect time to try out the cream puffs I've heard everyone raving about in our local papers. Apparently these cream puffs have a loyal following in Asia and around the world. 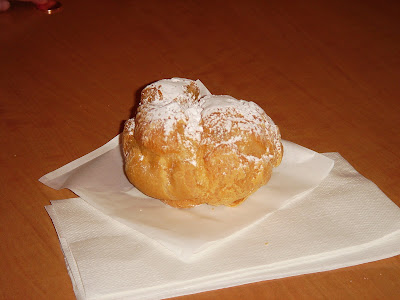 I had never heard of them until this year.
When I want a cream puff, I just bake my own. It's not exactly rocket science. They were the very first things I made when I started baking on my own in elementary school. They turned out perfectly the first time I made them too! 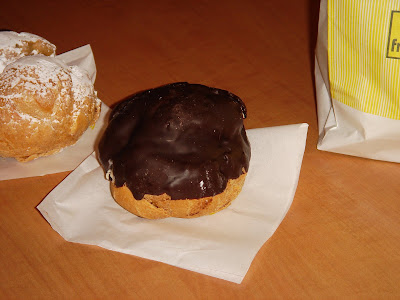 though other flavours were sold out at the time, at least i was able to buy a chocolate "eclair"

So here I was in line, waiting to see if these cream puffs lived up to their legendary status. Some people wait in the long lineups for hours just to get a box of these puffs. This reminds me of the Krispy Kreme phenomenon. I wasn't that impressed with the donuts when I tried them. They were good, but I didn't think they were worth waiting in line for when I could get really fresh donuts anywhere. The cream puffs were made on site I think. There were little signs everywhere telling of how "healthy" they were--for a junk food. One sign proclaimed each puff was only 230 calories each! wow. makes you want to eat a dozen, right? 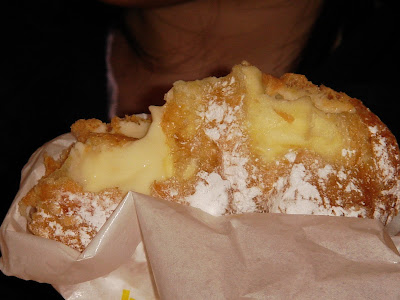 cream puff innards: the cool custard is creamy and not cloying at all

From my place in the lineup, I could watch the cream puff assembly line: the baked puffs cooled in a pile in the back, one beard papa's employee worked the huge pump from the vat of pastry cream, filling each puff by hand and they sat waiting for the powdered sugar dusting. It looked just as efficient as McDonald's. There was obviously a system and it seemed to be working smoothly.

When I bit into the cream puff, confectioners' sugar flew everywhere--onto the front of my shirt, on the table below and up my nose. I almost choked with the sudden and unexpected inhalation of powdered sugar. The exterior was crispy and dry. Very nice. The flavour of the puff itself was eh. I've had tastier puffs from elsewhere and even made at home. The filling for the puff was very good though and was very generous. It exploded and oozed out of the puff shell. The pastry cream was still cool and the textural contrast was delightful. These puffs were quite large compared to other puffs I've had in local bakeries. I suppose they should be large because of the price you're paying. 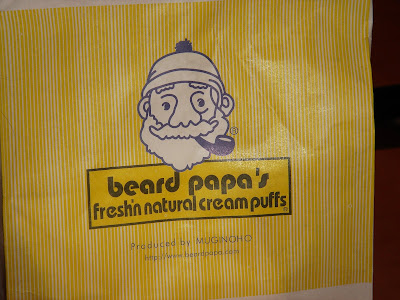 I would have liked to try the green tea cream puff but they were all sold out. All the specialty flavours were unavailable when I was there. Too bad.

The chocolate eclair puff was just as good as the original puff but simply had a coating of chocolate instead of the powdered sugar.

I've since been back to the mall and have not had the inclination to buy any more puffs. I was curious what the hubbub was all about and now my curiosity is satiated. I definitely won't be in any long queue to buy these puffs in the future. Give me a short lineup and I might be tempted to have another. As many Asian families don't know how to work their ovens (yes, I've seen some families use their ovens as storage for pots, pans, plastic bags and other kitchen detritus!); instead mainly using the stovetops for stir-frying and steaming, I can see why there would be the huge lineups of Asian people for these pastries.

Fellow foodies, we could do just as well or better by baking cream puffs at home.

Email ThisBlogThis!Share to TwitterShare to FacebookShare to Pinterest
Labels: bakeries/patisseries

They're gorgeous - how do they get them so large - I'm happy when I get golf ball size - these are amazing. It would be so cool to be able to stand there and photograph a step by step to see how they do them.

Now I am craving creme puffs. I have been wanting to try making them for a while.

There are 2 locations in NY, so I'm pretty lucky to have access to these.. They always have special flavors.. sometimes Earl grey!

i totally agree! definitely not worth all the craze

I agree, i think their fillings are really good but the puffs could be better. I just went this Sunday and i had one with a black sesame filling, it was great! :-)

Cream puffs?? yum! I haven't had one in years... what about a mint filling?