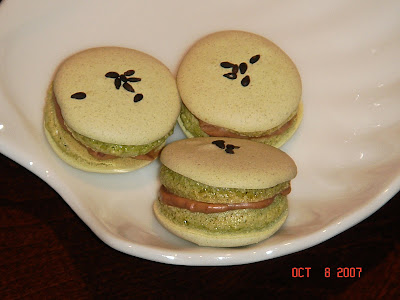 The way I see it, the battle is more than half the fun. Last week I decided to do some test batches of macarons. Just plain with no sandwich filling. Easy enough. I thought it best to start with a recipe I thought wouldn't work and save the best-looking recipe for last.

The battle began with my first recipe which called for an almond paste, confectioner's sugar and egg whites. It was so easy that I thought there had to be a problem. Well, there was. The macarons were too big (perhaps I had piped them too large to begin with) but I had followed the instructions--or so I thought--and yet they seemed to spread too. The batter did "flow like magma" as I have heard the term used by other pastry chefs. I found the batter too sickeningly sweet and the macaroons extremely chewy. The first batch had "feet" but the second batch didn't. I couldn't figure out why either. The straightforwardness of the recipe was so promising and there were so few ingredients called for that I should perhaps revisit and tweak this one in the future. Reducing the sugar and perhaps piping smaller macarons would help reduce the chewy factor. A plus for these cookies was the intense almond flavour and the very smooth texture of the batter.

The second recipe I tried was Martha Stewart's. Now, I love her pictures and her baking book is beautiful, but I haven't always had success with all her recipes. Her cookie recipes have always worked for me but the cake recipes were not always consistent. Figuring this is a cookie, I gave her technique/recipe a shot. Her recipe called for confectioner's sugar and egg white with almond powder. This was a tad more complicated than the first almond paste batch, but still doable and easy. These suckers didn't rise at all and thus I had "no feet" on my macarons. They looked like little ordinary cookies. They tasted great though.

The third recipe that I took on was the most complicated of all and called for an Italian meringue technique in incorporating the egg white with a hot sugar syrup. This required a stand mixer (my trusty 600watt Kitchenaid) to run from 10-15 minutes until the hot sugar syrup/meringue mixture cooled down completely. Yikes. Unafraid of syrups, I dove in and even added organic matcha to the almond batter. I even dared add garnishes of black sesame seeds. Call me cocky but I thought this one was going to work.

a cracked macaron. not a good thing
not so perfect but extremely delicious 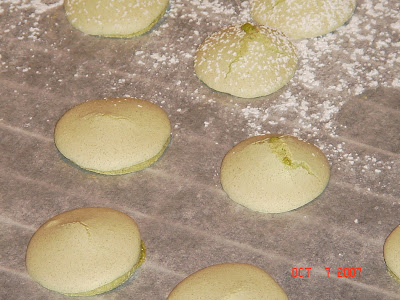 some macarons exploded like volcanoes because the "skin" wasn't strong enough

To my utter disappointment, my macarons "exploded" the wrong way. They exploded like a volcano (up top) and not from the bottom (to create the feet). This I figured was due to the fact that the exterior "skin" had not developed enough to contain the heated batter. With the second sheet I decided to increase the temperature and blast them with a ton of heat; then lower it to finish baking. They exploded too. My final sheet was a true test of my mental acuity...I thought that though I followed the recipe exactly, that there were probably environmental factors involved. It was raining that day so it was unduly humid. Not willing to wait for a dry spell of weather before baking this batch, I resorted to treachery...and there you have it. A perfect batch of macarons. Sort of. Some of them were lop-sided. 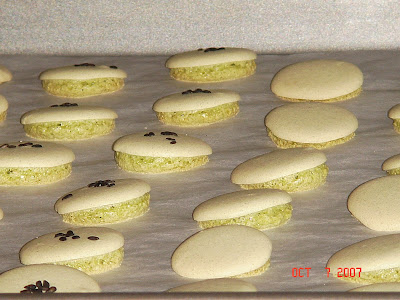 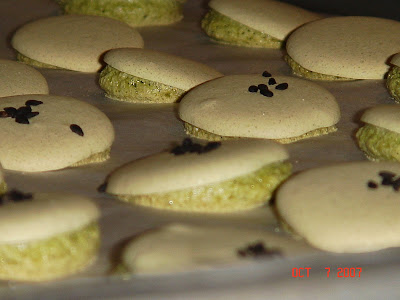 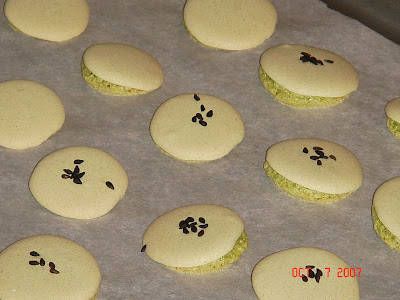 I would say that I won this battle but not the macaron war. I have yet to defeat it wholly. They did what I wanted them to do. I just need a little tweaking. I would like the exterior to be more delicate/fragile. I would like an even "foot" instead of some of my lop-sided ones. I want to be able to make batch after batch consistently without fail even if it's raining. 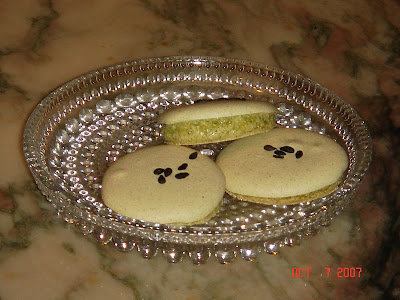 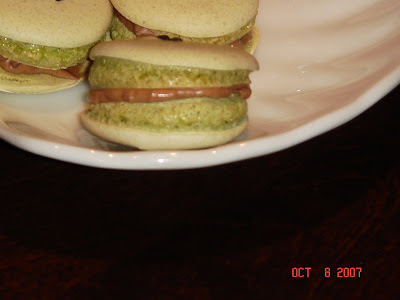