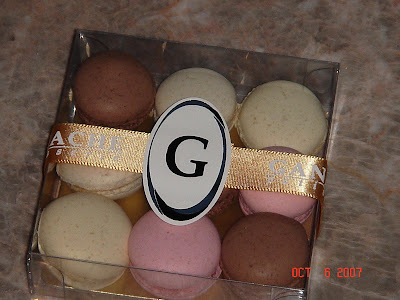 So the Battle of the Macaron begins...
Believing that education is the road to enlightenment, I decided to do some background research on what a real French Macaron should taste and look like. 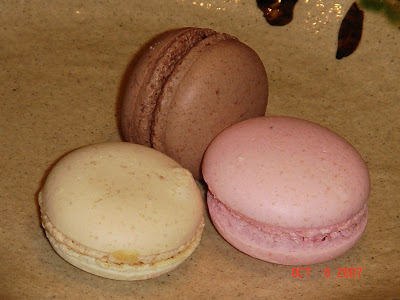 this is what a real macaron should look like

I also decided to purchase some Macarons from Ganache Patisserie in Yaletown just to make sure I am not baking in the dark.
When I arrived in the late afternoon, on a Saturday before Thanksgiving, there was already a lineup of 5 men in front of me. Odd I thought. 2 ladies were having beverages and sweets at a little table near the window and a lovely glass vase on a display table in the window was mounded full of pink macarons. Eureka!
The object of my desire rested in the glass showcase of desserts. Being a thorough investigator, I had to purchase a few of the other cakes on display just to make sure Pastry Chef/Owner Peter Fong was as good as I heard he was. 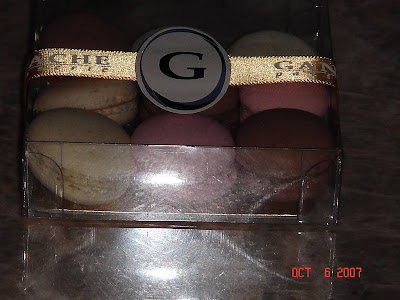 And what do you know! He was manning the till. What's with that? Apparently he told another customer (a regular I think) that he had given the girls a lunch break and he was stuck alone with a big lineup of people! 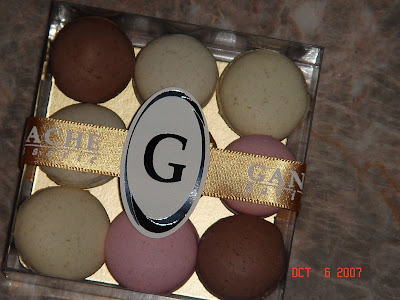 The first man requested a huge slab cake and Chef Fong said he needs at least a day's notice (no doubt!) The man needed to feed 8 people and thought the cakes there were too small. Chef Fong said that they would indeed feed 8. However, the man, being used to Superstore Slabs and the Safeway Special probably didn't believe him and left the store empty-handed. Tsk tsk.
The 3 French guys in front of me each ordered and paid separately and were wishy-washy about what to get. Geesh! And the guy in front of me took forever ordering the Chocolat Veloute.
Finally when it was my turn, I ordered a small box (of 9) assorted macarons. They looked a lot tinier than I thought they would be. There was chocolate, lemon, strawberry and vanilla. The box was $5.95
Then, I ordered the Rose et Pamplemousse mousse cake for Stomach and a Chocolat-Canneberge mousse cake for Bebe and Matcha Exotique for me. Check out the menu here for the cake components and other offerings. Most cakes about $5.95 each 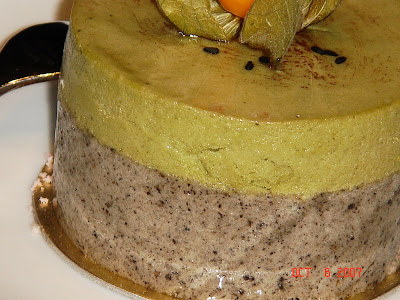 the matcha-exotique (green tea mousse, mango-passionfruit gelée, lychees, black sesame biscuit joconde)
I was a bit miffed because Stomach had tilted my box of pastries while loading up Costco stuff in the trunk. I found my Chocolat-Canneberge cake smushed up against the Matcha Exotique. I was fuming at him and he was wondering what the fuss was all about. 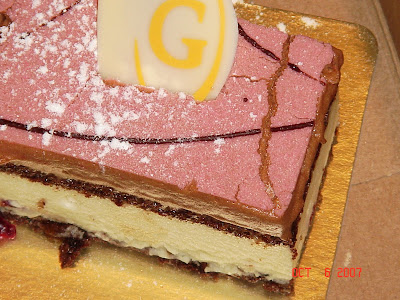 chocolat-canneberge: white chocolate cranberry parfait, milk chocolate mousse, praline crunch
At home, I opened the macaron box first. The lemon macaron exterior was smooth and crispy-delicate like a thin eggshell and inside it was a burst of lemon flavour. The interior was tender and light and dissolved quickly not unlike confectioner's sugar. It was like eating air. You wanted to eat more just to make sure it was as good as it was. Only the taste sensation is so fleeting. There was no chewiness to speak of in these macarons.
Aha. 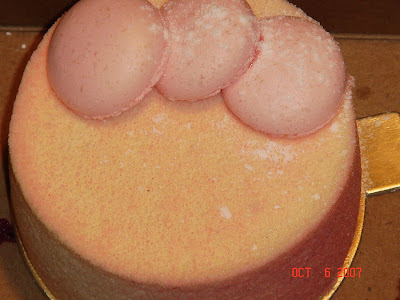 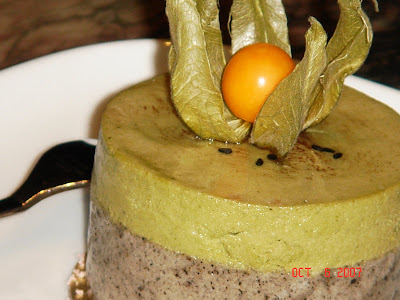 Ganache Patisserie was worth the trip. It definitely wasn't all traditional. For traditional, I'd go back to La Petite France. Peter Fong's patisserie takes a cool modern Asian twist to many of his cakes and that's refreshing too. 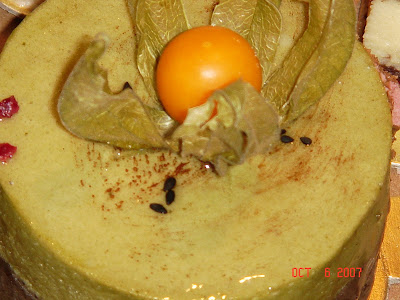 I'm going to have to do further research on this but this was an excellent scouting adventure to be sure.
Pin It
Posted by Cakebrain at 18:18