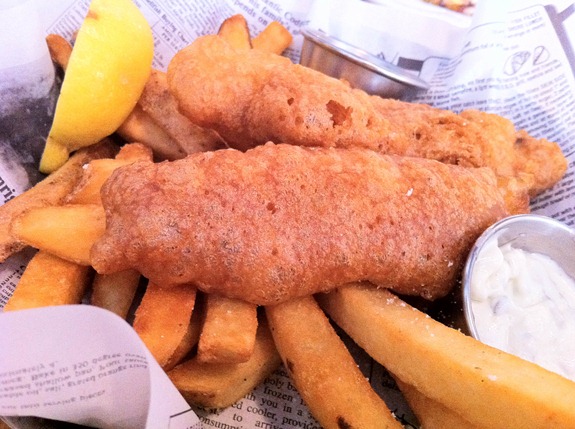 
All 3 females were hankering for some fish and chips.  Stomach was outnumbered (again!)

Sometimes he just has to go home and crawl into this man-cave downstairs, with its big screen t.v. and watch some war movie or something with explosions, bloodshed, gore and gunfire.


It’s funny…we found out that our parrot is female (after DNA sexing).  He was hoping that she was a he but he also suspected that she was too snuggly and delicate-looking to be a manly bird.  Oh well.  Now Oliver is Olive.  Stomach's the only guy in the household.  Both the girls are daddy’s girls.  So he gets plenty of attention.

At Fish Cafe, the batter is really light and crisp and the fish inside was moist and delicate.  I liked it very much.  The tartar sauce seemed to be house-made too.  The chips were huge, crispy and like batons.  I liked them.  Rating:  6/6 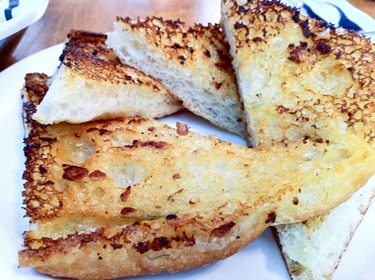 My daughters fought over the pieces of garlic bread.  Bib tried to hoard another piece as she eats so slowly.    Stomach had the third piece and that left only one left between the two of them.  Bib was foreward-thinking and grabbed the last one, putting it on her plate even though she hadn’t finished her first.  When Bebe realized that all the garlic bread was gone, she was not happy.  I had to rip Bib’s piece in two to make it all even and square.

Please tell me at what age my girls will stop fighting over the same thing?  Everything one has, the other covets.   Especially attention.  And food. 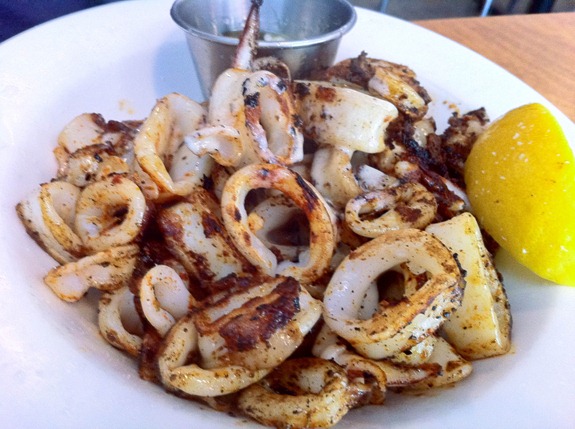 To defy our need for fried fish, Stomach ordered Grilled Calamari (appetizer size).   I think it was a pretty good choice as I smelled good char on it.  He had it with the lemon caper sauce and really enjoyed it.  He says next time, he’ll order it again.  Rating:  6/6

Located in Kerrisdale, Fish Cafe is a small restaurant with a menu that features primarily seafood of course.  The menu is on a blackboard and you can order fish soup, clam chowder, salads, a fish burger, fish and chips of course and calamari.  There are some fish specials too and I imagine that those change with the seasons.
Stomach was thinking about the calamari and wondering how he’d recreate that taste on his own at home.  I told him it wouldn’t work on the gas grill as the squid rings would fall through the grate!   I imagine there's some bbq contraption to remedy that, but it's way easier eating calamari in a restaurant!