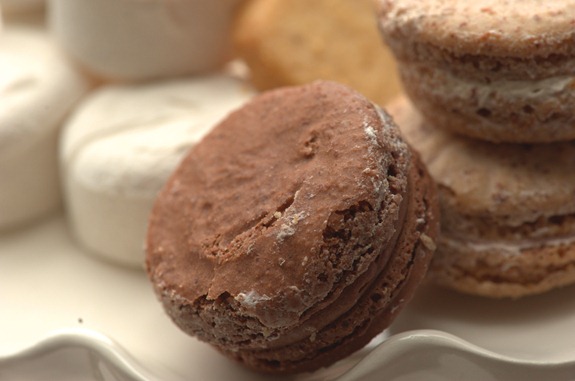 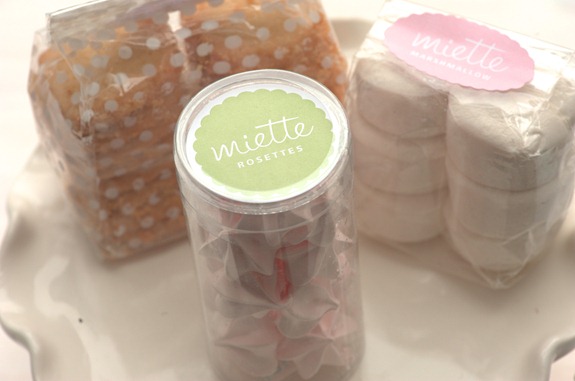 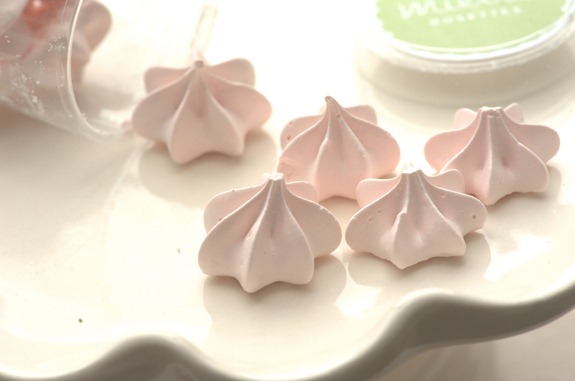 I thought the Rosettes were a gorgeous pink colour and thought they would taste like meringue. 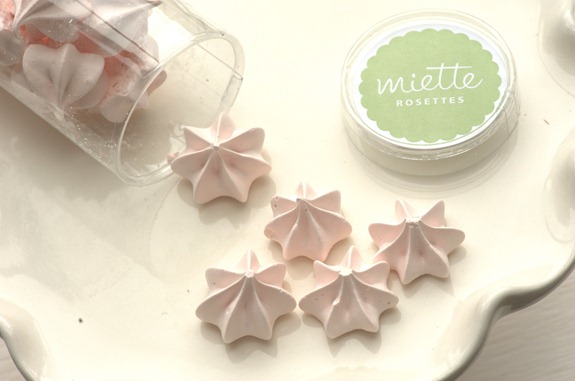 They weren’t so tasty after all.  They taste like dried Royal Icing.  But very pretty.  I think they’d make great decorations for a cake or dessert possibly.  They had a strange minty flavour. 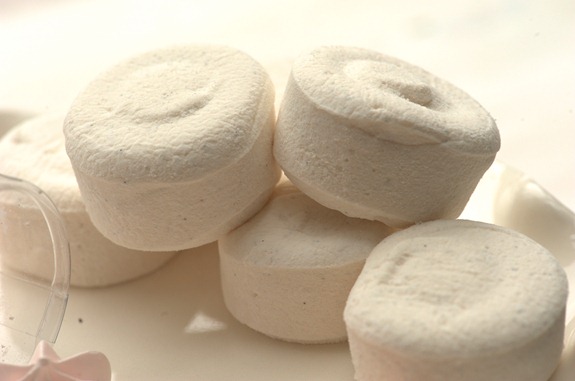 The Miette marshmallows are perfectly gorgeous.  They are shaped in cylinders and come packaged with dessicant (that you don’t eat) to ensure freshness and dryness. 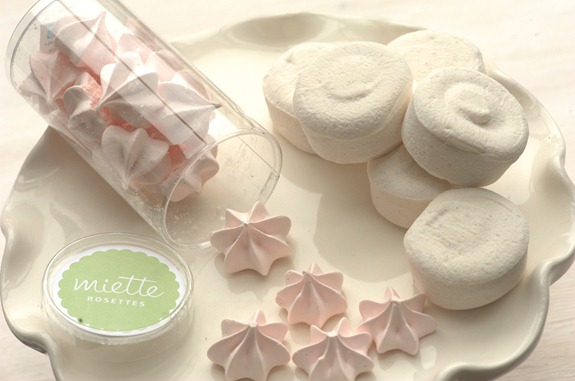 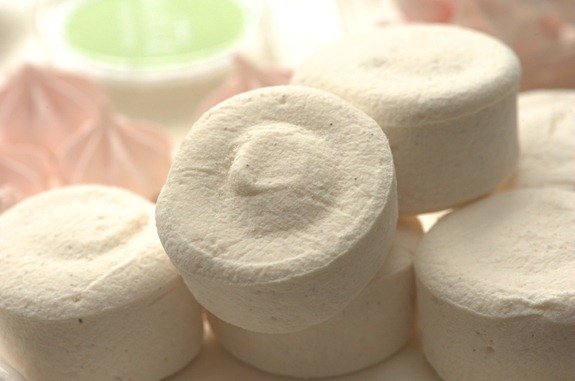 My girls love marshmallows and ate a whole bunch of the Recchiuti Vanilla Bean marshmallows that were just cut into squares.  These perfectly formed Miette marshmallows I told them we had to save for company.  You can also see the vanilla bean flecks in them too. 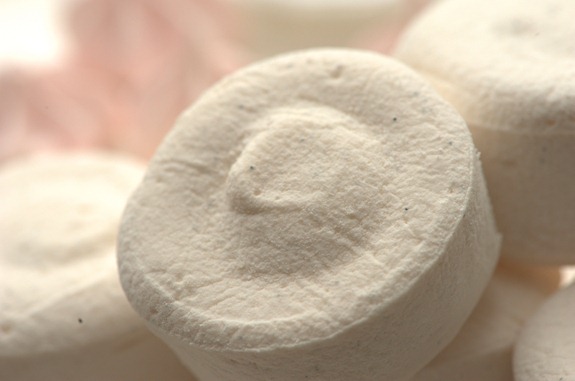 Gee, just how do they make them so perfect?  Whenever I make marshmallows at home, they are square or rectangular shaped because that’s all I can get them to do.  I can’t imagine trying to get a cookie cutter going into the marshmallow to get circles; no matter how much you apply confectioners’ sugar to dust it dry.  It’s sticky and stretchy and hard to shape so cleanly. 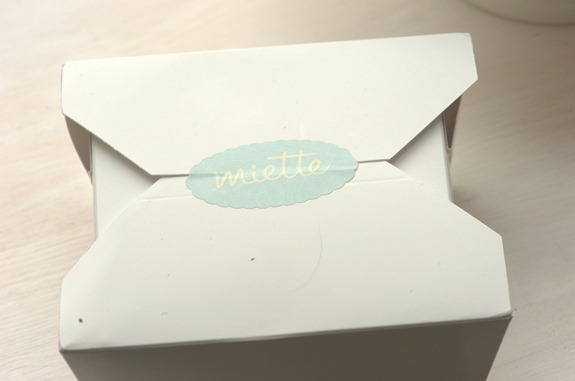 I purchased 6 macarons packaged in this white box that seemed to survive the bumpy ride in my carry on luggage unscathed.  Some of the buttercream slid around and got squished, but that was okay. 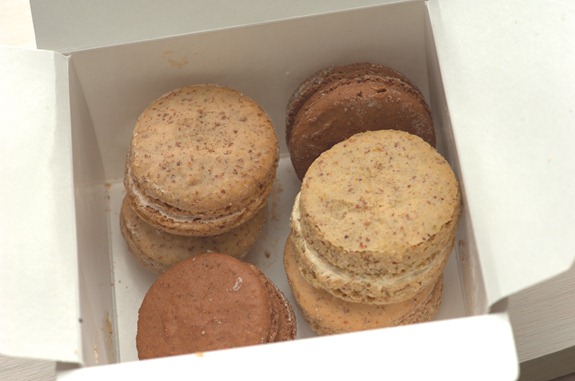 It seems as if they use almonds and nuts with the skin on for their macarons as the little flecks seem to indicate. 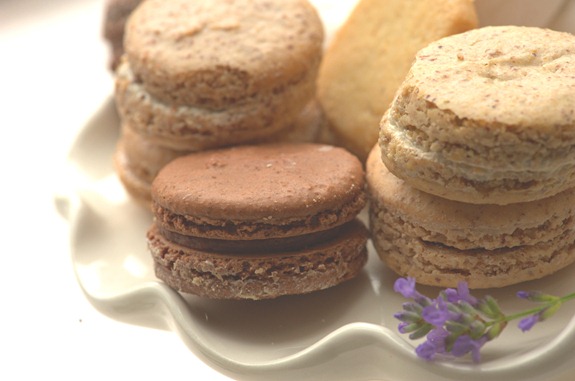 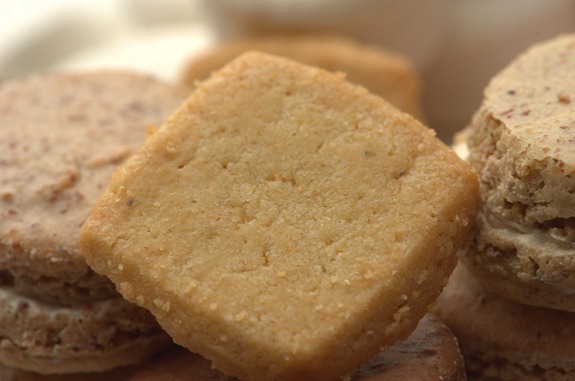 The cookies were a bit crumbly and not so pretty after the trip in my luggage.  The  texture was delicate and sandy tender too which made me think these were sables.  They were begging for a tall glass of cold milk. 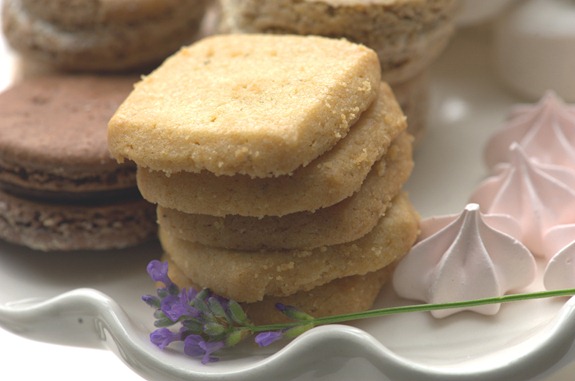 For Bebe’s bday, we revisited Miette to pick up her bday cake, which she decided would be the Old Fashioned Chocolate Cake with Italian meringue.  She liked the cherry on top and the fact that it was chocolate.  I was surprised she didn’t pick the Tomboy because I would have done that.   I am thinking she didn’t like the name!

We arrived at the BART station and began our long trek to the Ferry Building again to purchase Bebe’s cake.  Along the way, we went shopping at Westfield Centre Mall and took in the sights on Market Street. 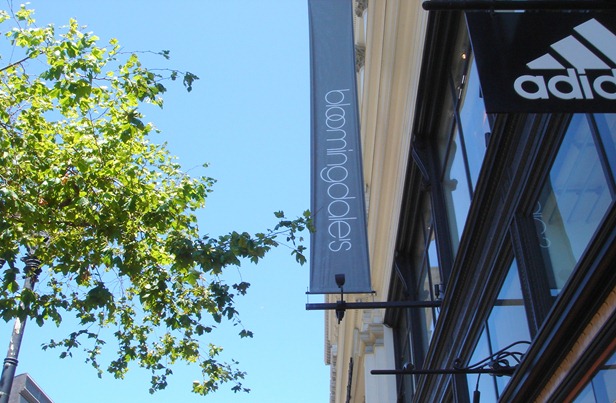 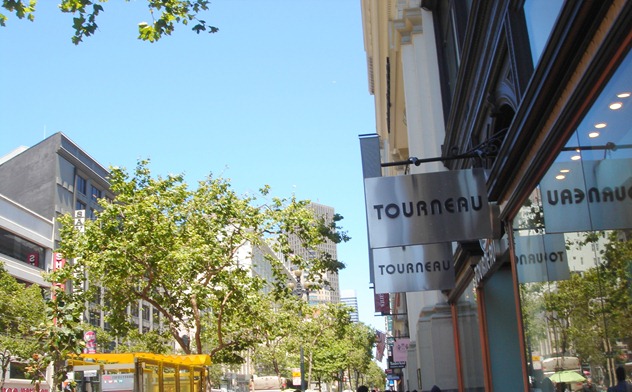 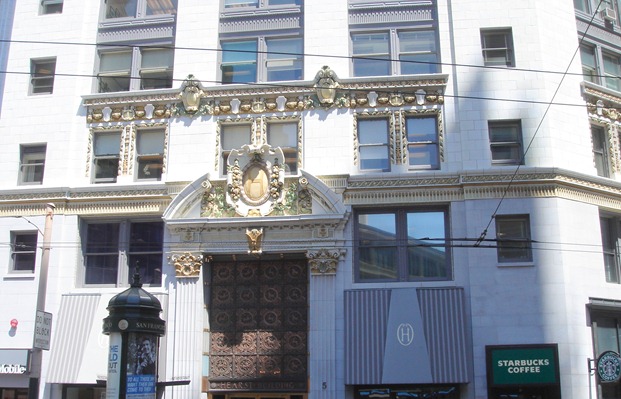 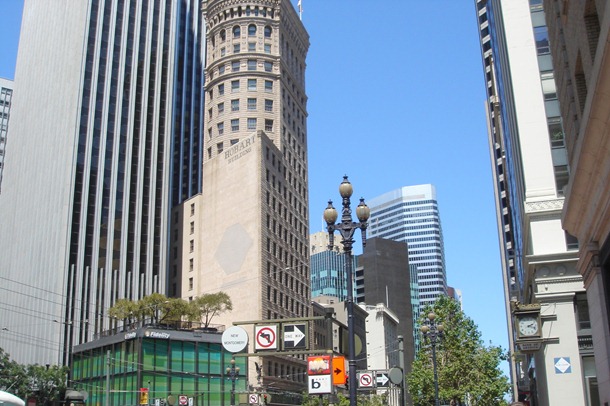 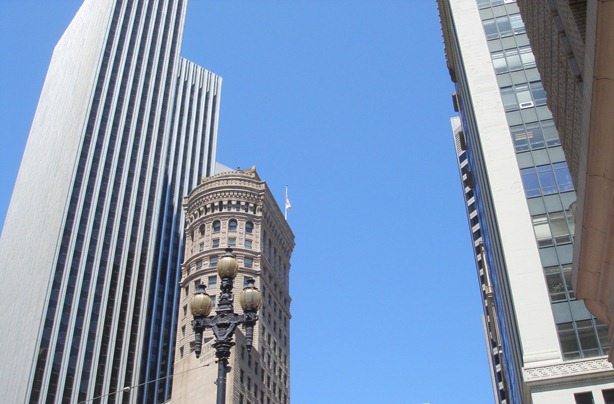 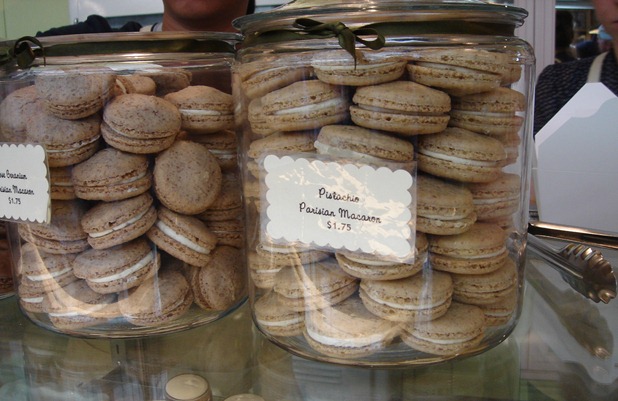 Upon finally arriving at Miette again, we decided to have a quick snack to re-energize us.  Bebe was acting really mature and surprised me by asking for the Panna Cotta with strawberries!  Bib wanted the cupcake with pink strawberry buttercream of course. 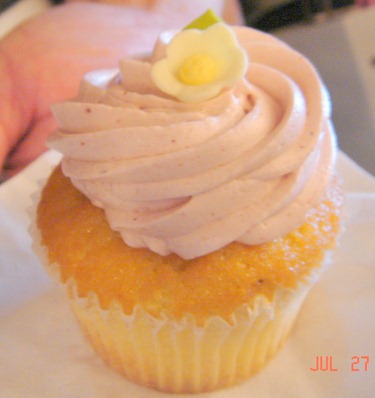 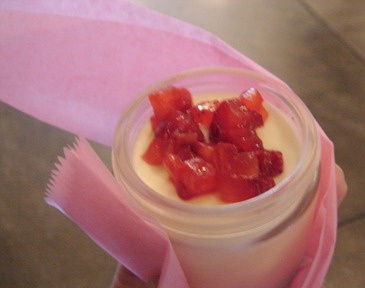 Bebe was grinning with pride that she chose such an elegant dessert.  She kept the little glass jar that it was served in as a souvenir and she now has it on her desk filled with pens.  She said it was the best dessert she’s had in a long time! 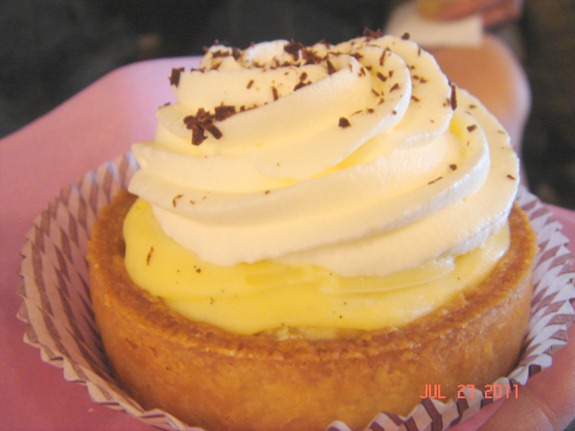 I did something bad for her bday and decided to ingest gluten!  If I was going to do it, I figured I would do it well.  I chose as my snack the Banana Cream Tart.  The crust was buttery, crumbly and tender and there was a layer of fresh bananas under the pastry cream.  It was lovely.  It was worth it. 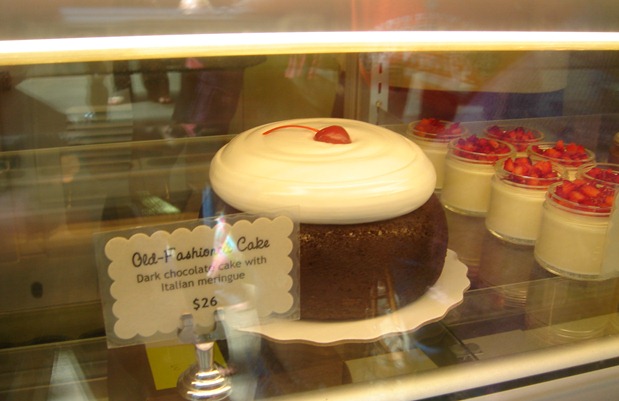 This gorgeous domed Italian Meringue looked pillowy soft when we purchased it.  Unfortunately, on the long walk and ride home on the BART, the entire mound of frosting slid off the cake and was squidged up against the side of the cake box.

My cuz helped me improvise.  I asked for a ziploc bag and metal spatula and employed my cake decorating skills to quickly remedy the horrific scene before me before Bebe saw her cake.  I carefully scraped the frosting off and put it in the ziploc bag.  I cut the corner off and tried my best to swirl a mound back onto the cake.  I washed and wiped the cherry and placed it back in the centre.

It didn’t look as pretty but it did the trick.  She didn’t notice a difference. This cake was dark and delicious.  The Italian Meringue frosting is like marshmallow fluff and is sticky and not too sweet.  It was a complementary companion to the chocolate cake.  Now I want a cake pan that creates this sort of look!  It’s so elegant!  I haven’t seen too many contour cake pans around but now I’ll start looking more earnestly.

Hi, I am a huge fan of your blog. Everything you do is so perfect i.e. your photography, your baking and everything! I think the reason why their marshmallows are so perfectly round is because they use molds when they set.

Thank you so much for sharing your blog ^_^

gee Anon!
thanks for the kind words! It made my day (and week!)

Yah, wish I could get a hold of some cylindrical molds for those marshmallows! :)