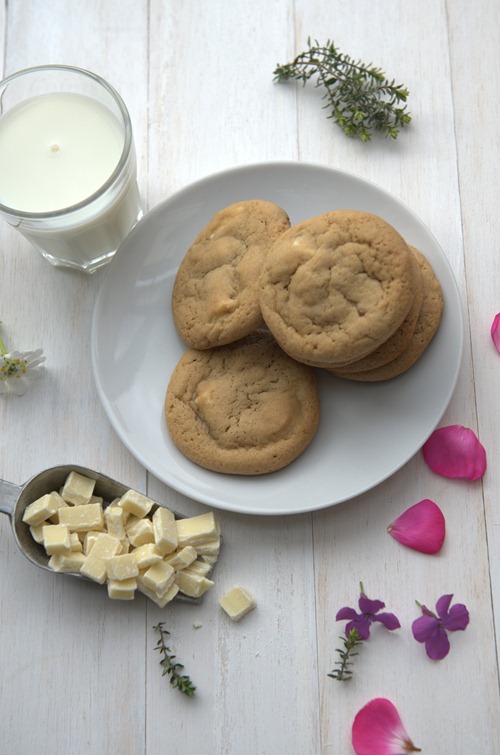 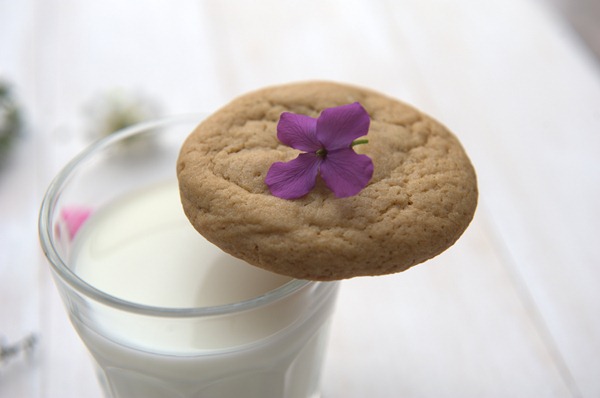 I’m not ordinarily superstitious, but these are extenuating circumstances.  My colleagues proclaimed many weeks ago that they would grow out their beards so long as the Canucks were in the playoffs.   Ahem…that is, the males on staff, of course. 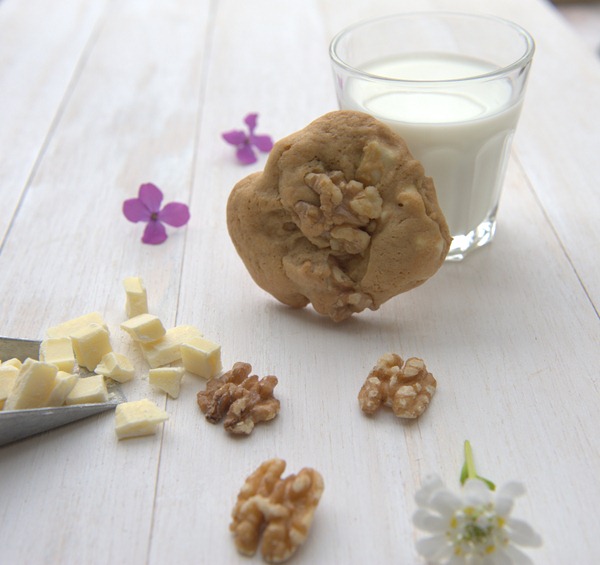 At one time in my youth, during the Canucks’ first run at the Stanley Cup in the 80’s, I was such an avid fan I used to listen to every single game (there were only 80 in a season at the time) on CKNW.  I did strange things during the playoffs to ensure that they would win.  At one point during that infamous Stanley Cup run, I had my mom trim my hair every time they lost because right after I cut my hair, they won a game.  I was looking mighty punk-rock after a while. 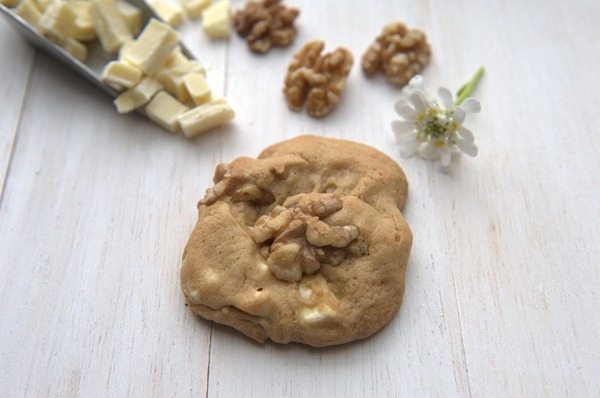 I was such a great Canucks Booster that I owned a Canucks Cookbook (yes, believe it or not I still have it), I attended all sorts of fan events and sought their pics and autographs at gas stations, around the Coliseum, and at my high school ice rink, where they used to hold their practices.  I even *gasp* skipped one block once to watch them practice.  I still have stashed away in a shoebox all sorts of autographed hockey cards from the 80’s and 90’s with newspaper clippings and other Canuck paraphernalia.  Though I was definitely not a stalker--I somehow even managed to find out what types of cars each Canuck drove.  My girlfriends hung around the Coliseum a lot and watched as the players would come and go.  They told me. I swear! and I knew their hockey stats, marital status and other such trivia by heart.  I could name most players in the NHL on sight of their jersey number and I even knew heights, weights and some of the birthdays of my favourite hockey players.  Ah, youth!  I was a passionate Canucks fan, to put it mildly. 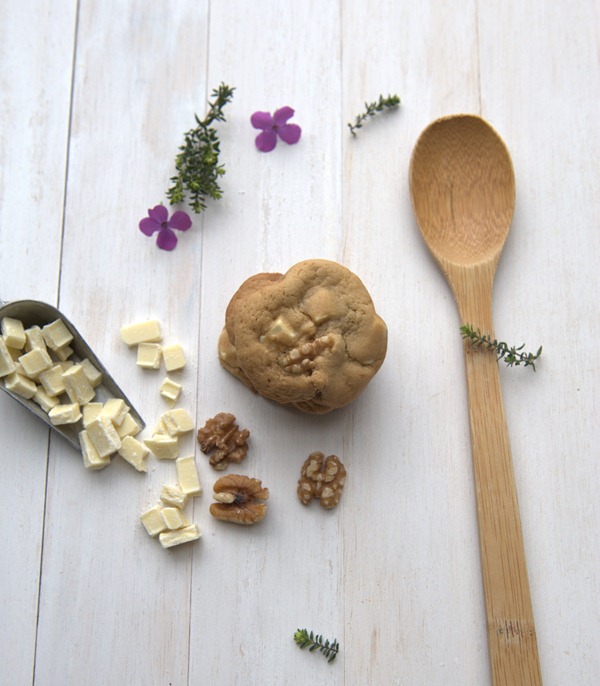 Nowadays, I seem to have fallen off the bandwagon.  I still watch games on t.v. here and there and attend perhaps one game a season (gratis! from hubby's excellent behind-the-home-bench-so-close-you-can-smell-the-players-company seats) but I watch primarily playoff games.  Every year, I enter the hockey pool at work --and never win! but alas, I am not as fervent a “believer” as I used to be.

What has all this hockey stuff got to do with my batch of White Chocolate Walnut Cookies?  Well, last night during the 7th game of the Canucks’ nail-biting overtime win against the Chicago Black Hawks, I was baking a batch of these cookies.    You know how players and fans have their superstitions about doing the same things to ensure good luck (or ward off back luck)?  Well, now I have this overwhelming feeling that I have to bake cookies every time they play to ensure they have a win.    It’s not as if I could try growing a beard anyway. 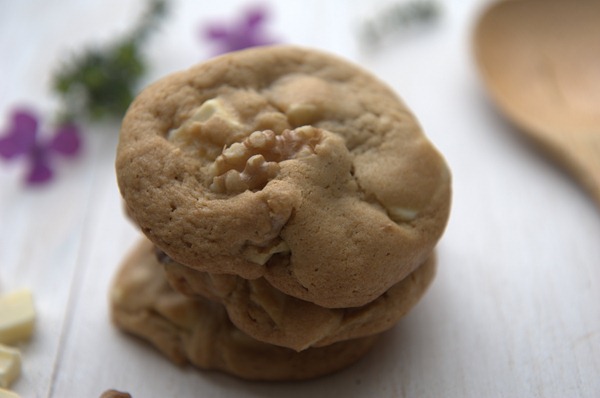 If they make it all the way to the final round of the playoffs for the Stanley Cup, I’m either going to get really really fat or preferably, my colleagues are going to be extremely happy after every game as they would undoubtedly reap the edible rewards. 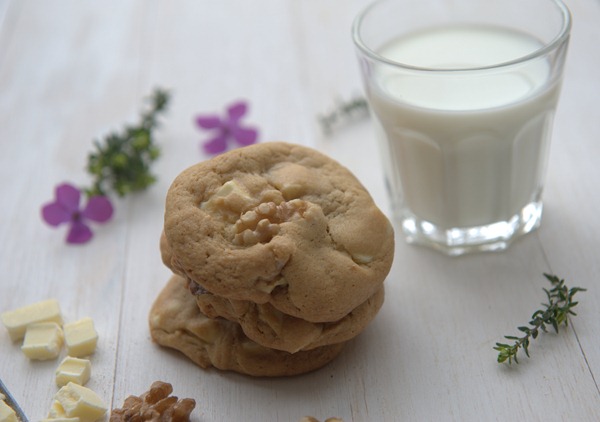 I used Callebaut White Chocolate Chunks and Walnut Halves for these cookies.  The recipe is unique in that it employs only bread flour.  This, along with honey (I used Manuka honey—tres expensive! but that’s all I had at home) will ensure a cookie that will be soft and stay soft… if they can last that long.  You can substitute the walnuts with macadamias or pecans but the walnuts added a faintly bitter edge that can temper the cloying sweetness that you can sometimes get with white chocolate.

This recipe comes from one of my favourite cookbooks, The Professional Pastry Chef, by Bo Friberg.  I've had this book for years.  It's like a Baking Bible to me.   I have also made the Chocolate Chip Cookie recipe and it rocks!  The book is a behemoth that is fully 5.5 cm thick (2 1/4 inches)!  The only drawback is that there aren’t tons of pictures.  There are a few pages of pictures that intersperse sections of the book, but by no means is every recipe illustrated with a photo.  I’m a sucker for pictures, I must admit.  However, if every recipe were illustrated the book would have to be produced in a few volumes instead. 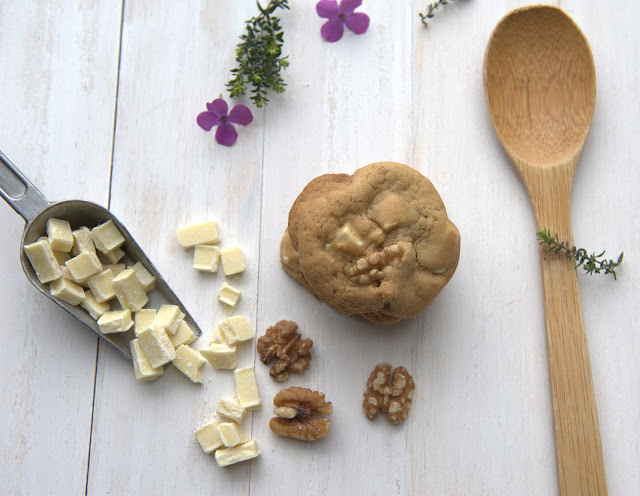 So here I am providing you with a series of pictures for this particular photo-less recipe.  And here’s the recipe.  I didn’t adapt anything other than the timing.  I baked them 13 minutes whereas the recipe calls for 15 minutes.  I like my cookies very soft and under-baked (yum!  cookie dough!) As well, I saved two-thirds of the dough in rolls of parchment in the refrigerator because I like my cookies freshly baked.  I’ll let you know how the aged dough tastes after Thursday’s game!

My advice is for you to weigh your ingredients like I did to achieve consistent results to the recipe.

Thanks for stopping by my blog and for your comment! Those are some good-looking cookies. It's been far too long since I've whipped up a batch! Your photography is so light and cheery -- beautiful :)

These cookies look delicious and your photography skills are top notch!

That's some gorgeous photography. I've had my eye on that book since forever. Loved hearng about your fanaticism :)

really beautiful pictures! your pics are always nice, but these look particularly gorgeous! maybe it's the composition. and the cookies sound delicious! best superstition ever!

If the Canucks make it to the final round of the playoffs, and your colleagues get fat too, remember that your English classes are here for you! : )

aw im embarassed now. im a terrible vancouverite. yenno why? cuz ive only ever seen one full canucks hockey game. im working on it though!

may i ask where you purchased walnut halves? i go to superstore and they only have walnut pieces

Connie,
I bought a huge bag of walnut halves at Costco. I also like their pecan halves too. Unfortunately, if you don't bake a lot, the nuts can go rancid before you finish a bag, but I like to pop mine in the freezer before that happens. I store nuts in the fridge in general. Try Famous Foods on Kingsway for bulk baking supplies. I buy smaller quantities there of specialty ingredients. You can't beat Superstore for some bulk goods. I get all my Callebaut chocolate there!

thanks cakebrain! too bad my costco card just expired :( and i totally agreee! superstore is where its at for chocolate!

I ordered Fribergs book and got it today, the first recipe I selcted were these cookies and I just looked it up if someone else had done them and here I am getting stuck in your gorgeous blog, thank you!!