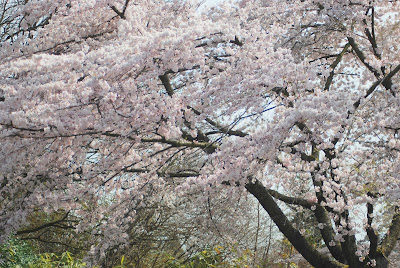 Have you ever swum in a pile of freshly fallen cherry blossoms?
it's cool.
you oughta try it. 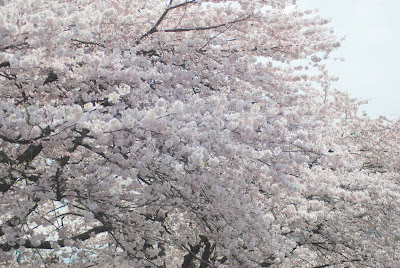 My little girls love spring in Vancouver when the whole city is bursting with blossoms. Our favourite bunch of Cherry Trees are located at Queen Elizabeth Park and there is a little triangle of land that has the hugest blossoms and the thickest tree trunks I've ever seen. Every spring, since they were born, we take a whole bunch of pictures of the girls with the same blossoming cherry trees. It's kind of neat to see the girls growing up with that kind of backdrop. 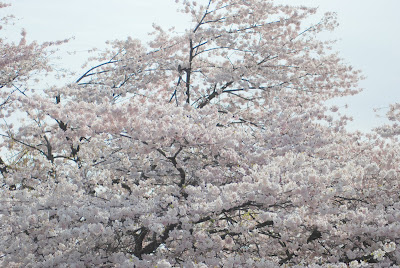 And what do cherry blossoms have to do with cupcakes? Well, the cherry blossom colours inspired me to bake some for a recent staff potluck. I made mini chocolate cupcakes using my favourite recipe. I used the whole recipe and found myself with 96 mini cupcakes. That's a lot of cupcakes, folks. I swirled pink buttercream and kept it simple. 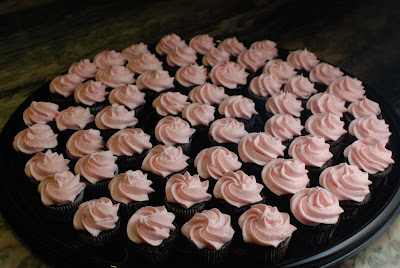 I took 2 of these trays to the potluck 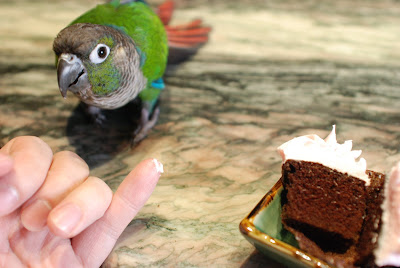 What's with the bird?
This is Ariel--not named for the Disney mermaid. I would never be so cheesy so as to do that. I thought of this name long before Disney did! He's named after a character from a Shakespearean play of course! How else would an English teacher name her pets?
Well, he has nothing to do with spring or cupcakes. However, he does love spring. And he gets all excited when he sees buttercream. Hey. He's omnivorous. Hey, it's okay. It's not as if he's eating a whole cupcake. The mini ones are twice the size of his head! He just licks my finger.
Ariel is a Green-Cheeked Conure from Bolivia. Actually, he's from Mission, B.C. He was born in a local aviary and I got him when he was a wee little birdie and had to feed him with a syringe. He doesn't know how to fly really. His wings have atrophied. I haven't clipped him in years. Actually, he can fly if he wants to, but he chooses not to. I leave his cage door open and he walks wherever he wants. I've never had to leave his big cage door closed. He just doesn't have the personality to leave the nest. He's happy as a clam climbing around using his feet and his beak.
Before I had kids, I used to let him walk all around my kitchen table while I did things like marking. He'd chew the corners of essays and sometimes pooped on kids' papers when I wasn't looking. The poop was kind of hard to explain to the students, but he's not exactly a big bird so fortunately his poops are tiny. He is "potty trained" however, and could "shake a claw" for treats. He even could say in a raspy voice "pretty bird"... kinda. My previous Green-Cheek was talkative, funny, smart, curious and had a wicked temper! He was a good flyer too. Ariel on the other hand is like a little baby and kind of "chicken" about trying lots of things.
Except buttercream. And ice cream. He's a sucker for desserts but I usually don't give him anything so don't worry. He won't lose his girlish figure. I actually don't know if Ariel's a "he" in fact because with conures you can't tell unless you have them tested. Ariel could be a "she". I wouldn't be surprised given Ariel's nature. 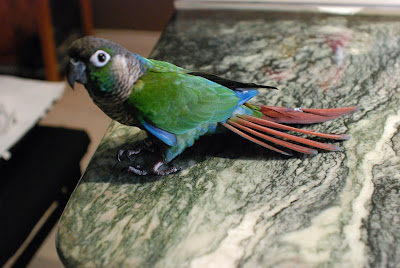 Anyway, it's spring. Birds are chirpin', flowers are bloomin' and it's time for cupcakes! Here's a few pics from Queen Elizabeth Park by the way. It's one of the best views in Vancouver. 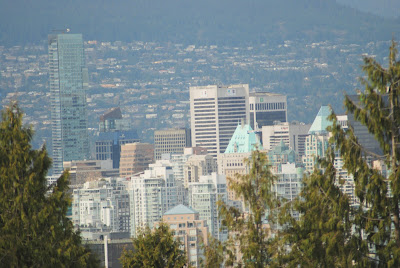 Since the Parks Board decided to top the trees, the city is way more visible than before. In fact, none of these buildings could be seen before. All you could see were the mountains. 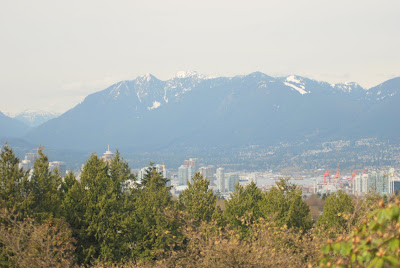 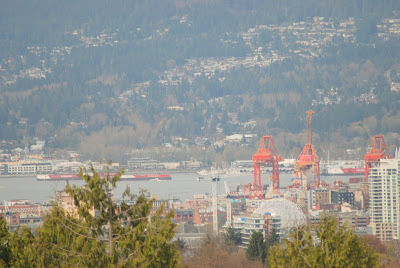 The North Shore mountains in the background, Burrard Inlet and just peeking behind the tree tops is Science World (the glass ball). 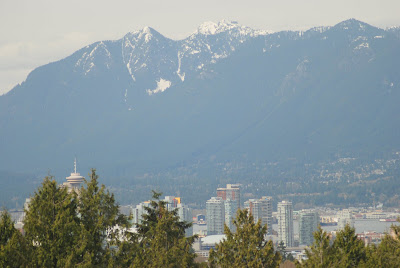 Downtown Vancouver with its skyscrapers and in near the bottom centre, BC Place Stadium (with its puffy white roof) 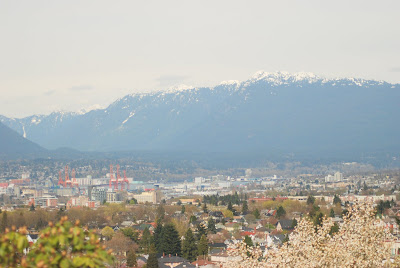 In this pic (above) I aimed the lens towards East Vancouver, where I grew up. Beyond is Burnaby. 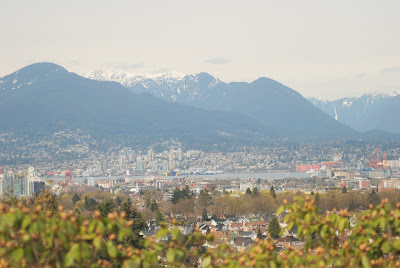 I grew up in a waterfront house which was perched on a cliff in the East Side, overlooking the North Shore mountains. We could hear tug boats lowing and trains shunting; we could smell salt air from the Burrard Inlet and see seagulls and eagles on a daily basis. On a clear day in the winter, with binoculars, you could see little people skiing down Grouse Mountain...and even make out the colours they were wearing! To the west, you could see the downtown waterfront. I miss that environment and don't think I'll ever forget the sensory beauty of living near the sea. 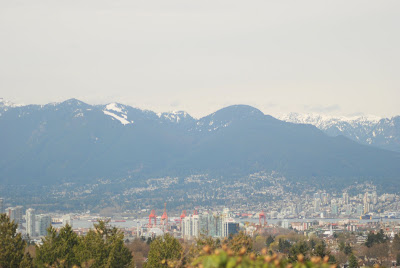 Do come and visit! We have great food too! 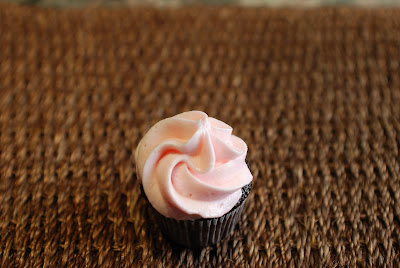 The Cherry Blossom Cupcakes were frosted with a Wilton 1M tip. 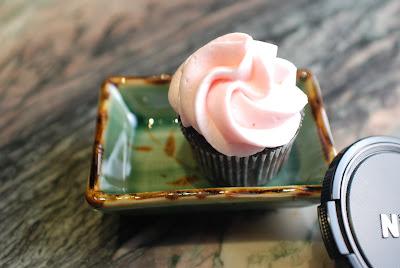 the cupcakes were so tiny you could pop one in your mouth...fleeting beauty and joy...much like Cherry Blossoms.
Pin It
Posted by Cakebrain at 22:59

Er... I haven't because we don't have cherry trees here :) But that, in addition to the views you've shown us (and Allen's own Vancouver-pimpage) is making me really wanna go!
And here in the Philippines, Ariel is generally a boy's name :)

oh these look so nice ! Great photos too. you surely made me eager to visit this wonderful place. :)yummy cupcakes.

I love the 1M tip! Those cupcakes are too cute.

Those are beautiful cupcakes. I love cherry blossoms too! Oh, and you have a pet bird that loves buttercream! He somehow manages to keep so trim though ..hehe

I love flowering trees! Sooo pretty! I also love how the cupcake tray looks like a giant cake covered in flowers. Hey, that's an idea for a future project! :-)

So cute, and great photos! (The day the cherry blossoms bloom here in DC is HUGE, so I have an affinity for them.)

I live in Seattle which I think is a beautiful city. But every time I go to Vancouver, I am blown away by the beauty. You are lucky to live there with the great skyline, the water, and the mountains practically sitting on top of the water. Oh, and the food and the shopping are fantastic too!

So cute! I love mini cupcakes, and they match the cherry blossom theme perfectly. :)

I love your cupcakes. Perfect for spring!

The cupcakes are adorable but I'm in love with Ariel. He/She is soooooo beautiful! And so funny he likes desserts! Cute, cute!

As usual your blog has cheered me up and I esp. loved the pictures and story of Ariel and Vancouver. I have been to lots of places in BC but never the coast which I hope to remedy soon. btw, I am a vanilla person yum! you can keep your chocolate LOL!!

Love the pictures...never had a chance to see the cherry blossom...the cupcakes look very yummie!

Wow, you sure live ina beautiful place! Those are great pictures! You must have had a great day at the park. I love it when all the trees are in bloom around here too. That's all ending, though. I only managed one picture. The cupcakes look so good too!

I'd love to swim in a pile of cherry blossoms, BUT I'd probably sneeze my head off! :P THey are sooo beautiful, yet, my whole family have seasonal allergy! Even with medication, I'm too afraid to take the risk --- sooo sad...but at least I have loads of beautiful photos to admire! ;)

ahh, makes me miss DC, these are gorgeous, I NEED a 1M tip!

Oh my gosh! They are just adorable!!!

These are truly beautiful cupcakes!

Those cherry blossoms are just gorgeous. What a perfect inspiration for your precious cupcakes!! That buttercream looks divine. I love that Ariel is a dessert-bird. I don't blame him!!

I love that square ceramic dish you have your mini cupcake in - where did you get it? Hey, Ariel's a smart bird - I wouldn't leave the nest either if I was being fed buttercream! LOL Julia

The cupcakes are absolutely perfect -- I can totally see myself popping a handful of them :-)

In the shot with the tall buildings, I'm one block to the left of the super tall one. I'm waving ... can you see me?

Julia,
The little square dish is actually a Japanese soy sauce dish! so as you can see, the cupcakes are indeed tiny! I bought a set of these dishes a long time ago, in a Japanese store in called Utsuwa-no-Yakata. I think if you google it you could find it online too.

Cute cupcakes...and the pictures are just amazing, thank you so much for sharing it!

Ooh sakura. Such a beautiful sight during springtime.

What darling little cupcakes...pink icing is my favourite and thank you for the photos of the cherry blossoms, the trees are just starting to blossom here in Maine and the plum blossom smells gorgeous, a lot like mimosa...thanks for the delicious images!