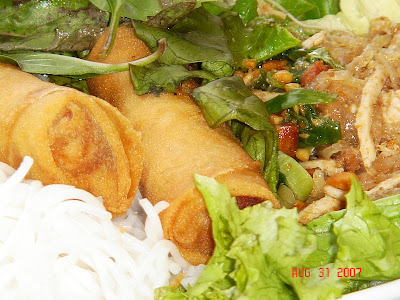 I'm so sick of eating Chinese food! I want some other flavours. This weekend we had takeout because Bib is starting to crawl and we need to stay home for her sake (and ultimately ours!) We had cheapie Vietnamese food for dinner Friday, Chinese Dim Sum on Saturday, and Shanghai food and Indian food for dinner. 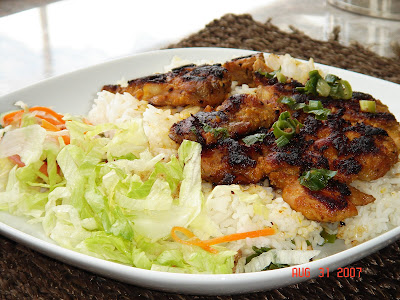 For Friday's dinner, the hole-in-the-wall Vietnamese restaurant that Stomach picked up food from was actually good. Sorry, I don't know the name--will get back to you with that, but here's the pictures! Each dish was only $6.00. They were decent portions for the money and we were full. My mother wasn't so crazy about her Lemongrass Chicken on Rice (however it was a huge portion) but Bebe loved her Meatballs in soup with Vermicelli, and I like my dish on the whole, although my Shredded pork was--"eh...okay" with mini springrolls on Vermicelli. In fact Stomach forgot to order my usual favourite which had grilled pork or chicken instead of the shredded pork. 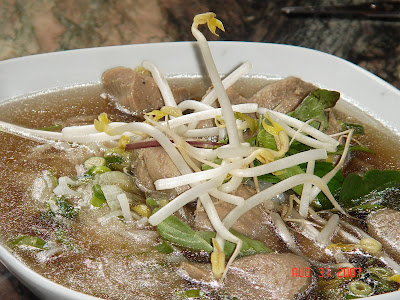 beef balls with rice noodles in soup
By Saturday I was still craving something different. We had dimsum at Red Star Chinese Restaurant for lunch and I wasn't as impressed with it as Stomach and his mother was. I didn't like the overabundance of cheapie celery and carrots in their Hand-Shredded Chicken salad with jellyfish...and I hate jellyfish and couldn't find the chicken in the dish. Perhaps I was getting miffed because I didn't really want to eat dimsum again! By this time too I was so wanting something else other than Chinese food. I mean, yeah...Vietnamese is different, but I want really different. I wanted Indian food. Nobody else in my household likes Indian food. So fortunately, by doing takeout I still get what I want. Stomach ordered Shanghai takeout from Golden Great Wall on Broadway for himself and Bebe, and I had my Indian food from "Raga" on Broadway.

For $19.95 (a combo special for one person), you get 7 (500ml) styrofoam containers, a huge foot-long foil pack with naan bread, and another smaller foil packet with 2 pieces of tandoori chicken. The styro containers had butter chicken, lamb curry, daal, raita, chana pindi (chickpeas), pulao rice and a container full of dessert (kheer--a basmati rice pudding cooked with milk, piastachios and almonds, served cold). Though I was looking forward to the "gulab jamun (Indian doughnut)dessert" as advertised in the takeout menu for the combo, Bebe seemed to really like the substitution kheer and gobbled it all up. 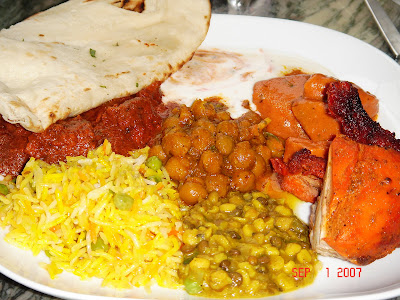 indian food: a little bit of everything!
I scooped out a couple of tablespoons of each item on my dinner plate, leaving the rest in their styro containers. I ripped off a quarter of the bread and took out one piece of the tandoori chicken. It looked to me a bit much for one sitting so I was cautious. I played it safe...or so I thought I did. With Bebe helping me with the dessert and a bit of the naan--which really put me over the top because it was huge--I was still so stuffed that after dinner I couldn't move. You know that feeling you get after Thanksgiving turkey? I put away the rest of the food in the fridge for the next day. My craving satiated, I now crave a rest from food. We're taking a break tomorrow and not eating out for lunch!
Pin It
Posted by Cakebrain at 21:18