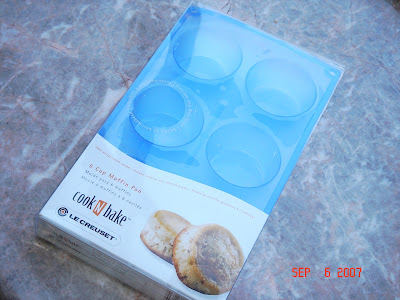 $30.00 for a 6-cup muffin pan! geez...what was I thinking?
I caved in and purchased some silicone baking cups the other day. 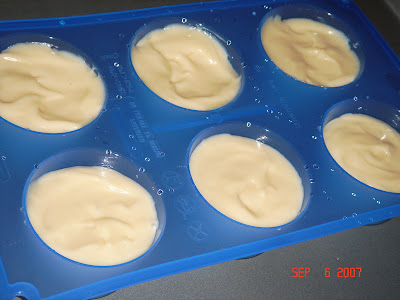 It was rather expensive, but I figure I haven't been spending too much money on myself so I needed a treat. The only problem was it was $30.00 for 6 muffin cups in the pan and I figured most recipes make at least 12 muffins. I didn't want to spend more money for another pan,so I'll have to halve all my cupcake recipes to fit the capacity. 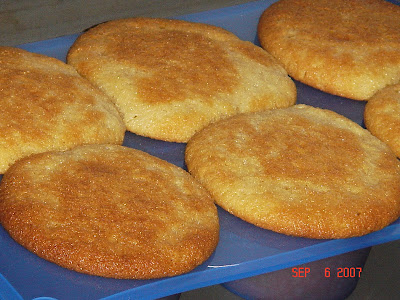 These cups look neat because they have straight sides. Their capacity is extra large but I was too lazy to get out an extra pan to hold all the extra batter I had left so I just poured it all into the molds. I knew I wouldn't be able to make the desired level-topped cupcakes with so much batter in the cups. The end result is they kind of spilled over and spread. However, I'm okay with that because the tops are tasty. 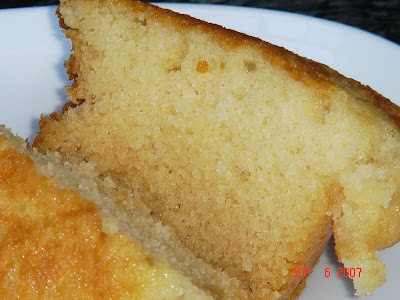 For the silicone pan's inaugural batter, I decided to try a recipe I saw on a cool blog I've been visiting, "Couture Cupcakes", and found a White Chocolate Cupcake recipe that looked yummy. I halved the recipe and baked the mini cakes for an extra 8 minutes and they turned out quite well. When I flipped them upside down, they easily popped out and the bottoms were more caramelized than if I were to have used a paper liner and regular tin. I like these muffin pans and I would recommend them because they make HUGE cupcakes...and nothing's better than huge cupcakes (other than a whole bunch of itty bitty mini ones). The pans are dishwasher safe and you can freeze them (for ice cream) too.
In the future, I'll try making them with less batter so that I'll be able to make a cupcake that looks like a miniature regular cake...by splitting, levelling and frosting it like a regular-sized cake. I think it'll work.
Pin It
Posted by Cakebrain at 20:01

is it the silicone 6 cup baking tray? is it flexible? cuz i have one and i've been wondering can i get it into the oven??? or i must use the metal tray instead?

Yes, this is a flexible silicone baking tray. You have to put this on a metal cookie sheet or jelly roll pan so that you can move it to the oven. That's generally how you use silicone muffin-type trays. It just sits on the metal tray in the oven. Otherwise, you'd have a huge mess with the floppy tray.