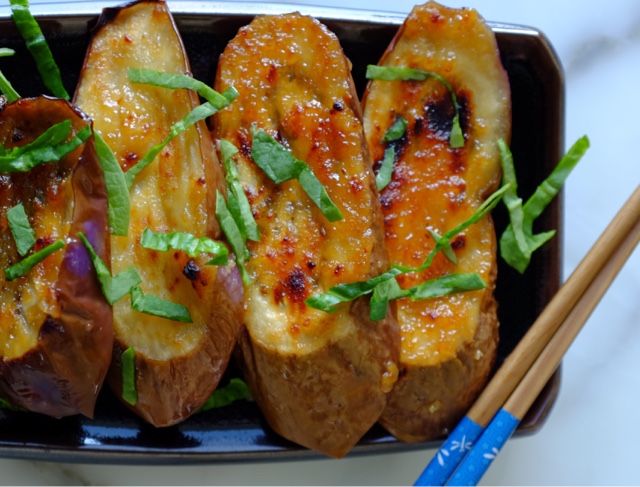 Here is yet another fabulously easy go-to no-recipe recipe! 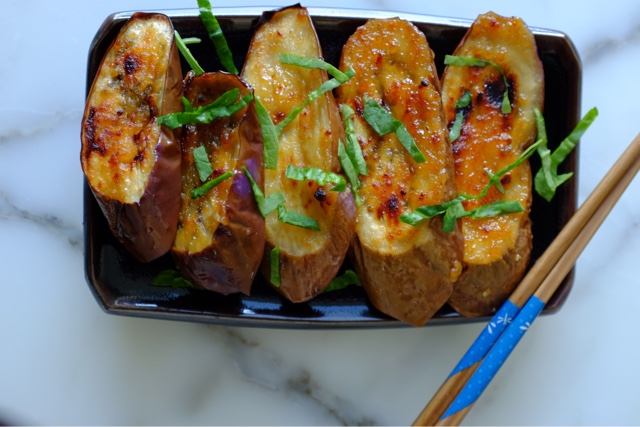 1. Slice the Japanese eggplant on the bias (diagonally) into 1/2 inch slices.
2. Arrange on a parchment-lined baking sheet or shallow pan in a single layer.  Brush the tops of the eggplant slices with avocado oil.
3. Preheat a broiler or crank up the bbq.  If using a bbq, you may want to place the eggplant in a foil-boat or metal veggie basket so that they don't fall through the grate.
4. Mix together the Miso paste, maple syrup and hot water to make a paste.  Add more hot water if the paste is too thick to brush.  Stir in the avocado oil.  Brush the miso mixture onto the tops of the eggplant slices.
5.  Place under the broiler and broil until golden brown and glazed.  The eggplant should be soft all the way through.  Mine took approximately 12 minutes because I had the rack placed in the middle of the oven.  I moved it up to the top third of the oven mid-point because I wanted it to brown more quickly and I was hangry!  Cooking time all depends on how far away your eggplant are from the top element...watch the eggplant carefully so they don't burn.  If you're using a bbq, your eggplant will not char if they are in a foil boat.  However, you can get char on them if you use a metal veggie basket.
6. Sprinkle with slivered scallions to serve.