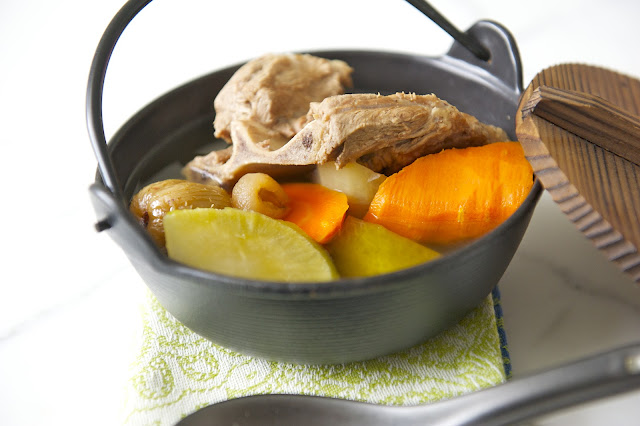 I drink this broth (not the meat and veggies) primarily when I'm detoxing.  There is no added salt in the soup.  It is both flavourful and filling.  I believe that this soup would fit into a GAPS diet as well as many of the other diets out there that aim to address gut and other immunological issues in your body. 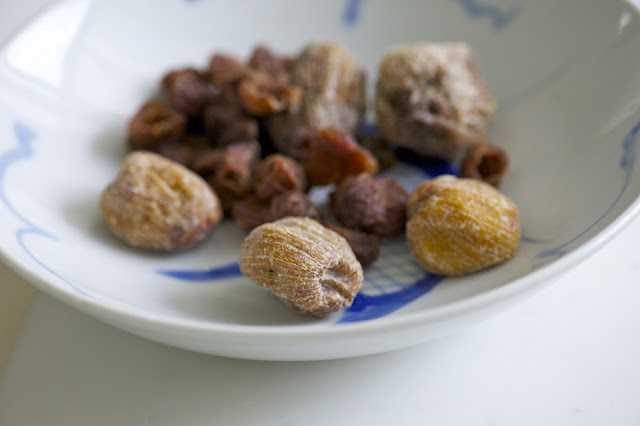 Well, in any case, we never drink it for anything else but for the fact that it is very yummy.  It's a savoury broth that is clear.  I use a special skimmer to remove all the fat from the broth.  If you don't have that, you can refrigerate the broth and then remove the congealed fat from the surface before drinking it. 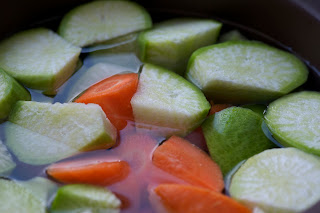 Green daikon (lo bak) and jumbo carrots are cut in large chunks.  Wash and peel the carrots and daikon.  Regular white daikon and carrots will do if you cannot find the special green daikon or jumbo carrots.    Most Asian supermarkets will carry these specialty veggies that don't taste that great on their own but are especially good for flavouring soups.  Turn your root veggies 1/3 turn as you chop them to get these lovely chunks. 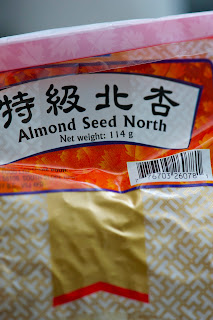 ALWAYS use both NORTH AND SOUTH almond seeds.  My mother told me to always use both in a soup for balance.  I shudder to think what would happen if we ingested a soup made with only one type of almond seed! ;p  These are not regular almonds you eat out of hand but a type of almond seed used specifically for Chinese herbal soups.  Both are required as they have opposing effects on the body...if you believe in that sort of thing.  I just know the soup tastes yummy if you use both. 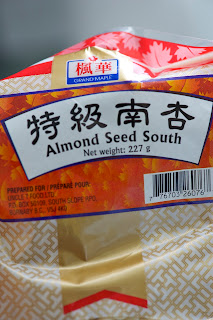 You can find these almonds (tiny pit-sized almond shaped seeds) in an Asian herbalist's shop of the dried goods section of any Asian market.  They are extremely common and dirt cheap to buy (as are the dried dates and dried longan above). 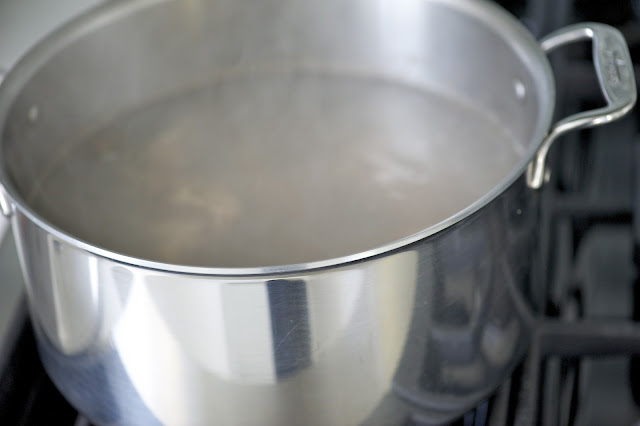 You must use pork bones for the broth.  The first (and nastiest) step is you must boil the bones to remove the scum and blood.  Remove any sinew or other nasties too while you're at it.  I generally bring the bones to a boil in a large pot, boil the bones for a few minutes and then drain them in a colander under cold running water.  I wear rubber gloves and scrub the bones of the gunk and discard all the nasty looking bits of fat and stuff while I'm running the water.  It generally takes me several minutes to clean the bones.  The soup bones are then placed into a fresh pot of water for the soup.  Never dump raw pork bones into your soup broth as you'll have a disgusting smelly mess to deal with and the soup will taste musty. 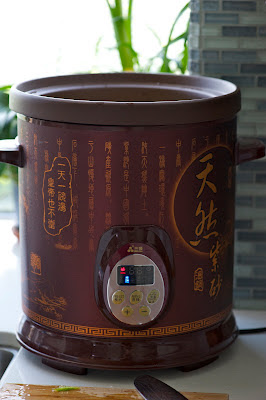 Chinese soups require 2-4 hours simmer time.  My soup pot is like a crock pot and is made of specialty Purple Clay that is from China.  I think it's the same clay they use in those lovely little teapots.  It makes fantastic soup and relieves my stovetop space.  I just plug it in and forget about it.  I fill my pot up 3/4 of the way with water and then dump in all the ingredients.  Generally, I leave it in there for 3-4 hours and it simmers gently the whole time. 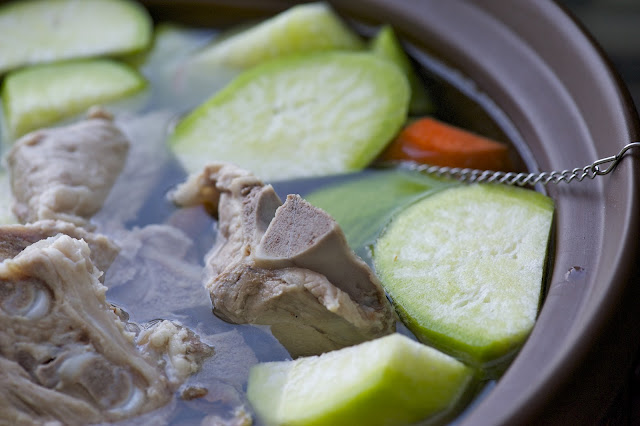 You can eat the cooked veggies and the meat from the soup bones if you wish (my family loves it), but oftentimes the flavour has been sapped out of the veggies and is infused into the broth.  My daughters generally eat the carrots on the first day and they don't seem to like the carrots the next day. 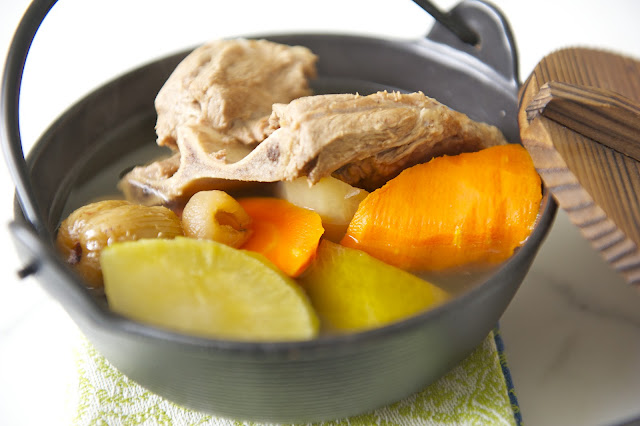 This is only one of a myriad of slow simmered soups made from combining fruit, veggies or dried herbs, roots and seeds.  There's one using green papaya and chicken feet, another with apples (for coughs) and some herbal ones using sticks of herbs and stuff.   I can't read Chinese, but I go by how they look.  These soup broths are generally very popular in Chinese families during dinner time.  Old grandmas in particular know how to make these.   For some reason women are praised for their abilities to make these soups but when you really think about it, there's not much technique other than the cleaning of the bones.  You just dump everything in a pot with water and simmer it for a long time.  It's not as if you're slaving over a hot stove or anything.  Families make these soups on a daily basis.  I think that drinking a bowl of soup before a meal may take the edge off of hunger and force you to eat less (a simple diet aid) and the broth definitely will hydrate you. As for medicinal properties...my doc says he doubts it.  These are not the icky herbal decoctions that people use in TCM in any case.

The recipe?  I never use one.  Just grab a handful of each of the dried fruits and herbs I have pictured above.  I used 4 large carrots and 4 large green daikon and 2 pounds of pork bones for the soup.  My pot is huge and I covered the whole thing with water.  Skim off the scum as it's cooking.  You don't have to do this much if you've washed the bones properly.  If you have enough veggies and bones, you won't need added salt.  It'll be plenty flavourful.  Don't add salt if you can help it.  The dates and longan will add sweetness.
Pin It
Posted by Cakebrain at 11:10

Yum! My mum makes this often because it's so simple and foolproof. I especially love eating the meat off the pork bones with a little bit of oyster sauce on the side, it's like having a pre-meal for the real meal :P

wow, very cool! i've never made anything like this, but i've always wanted to use daikon in something. and it looks so healthy! yum!

So nice recipe, it looks like very delicious recipe.
Thank You for sharing us.
Luthra Dawakhana