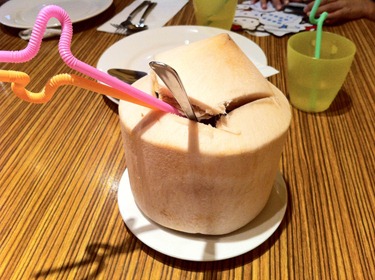 
I knew the kids wouldn’t like it, but we ordered it anyway because Bebe wanted to try it.   I ended up drinking most of it.  Coconut juice is in fact coconut water and not coconut milk and doesn’t taste anything like coconut milk.  It was fun to dig out the fresh young coconut flesh though.  This too the girls didn’t like eating.  I knew we should have ordered a fruity drink instead! 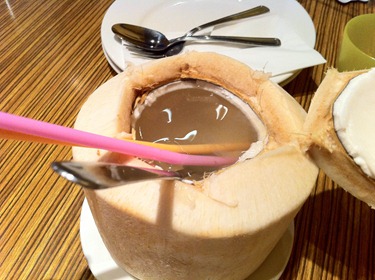 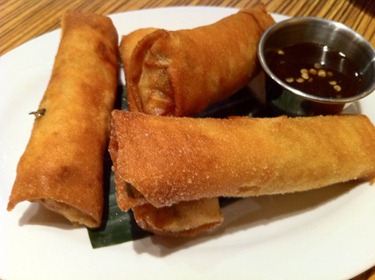 These were deliciously crisp and not greasy.  It was accompanied with a spicy sweet dip. Inside, the filling was predominantly cabbage, some carrot and a variety of other shredded veg. 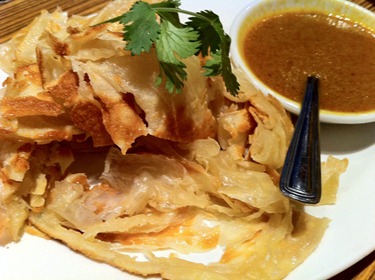 The Roti Canai came with a curry dip and was multi-layered and good. 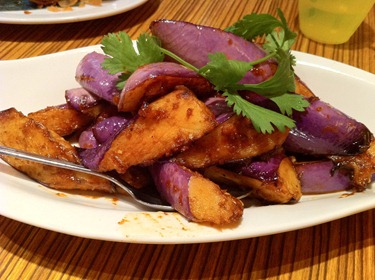 Because Stomach doesn’t like green beans, we modified something on the menu and he requested that the dish be just of eggplant.  The dish came out really good and though it wasn’t as spicy as that from Tropika, it wasn’t as oily either.  Stomach admitted that it was a bit too tame and the Tropika version is better because it has more dried shrimp and heat.  However, I liked this version as it was less greasy.  I agree it could have done with more heat and little bits of shrimp. 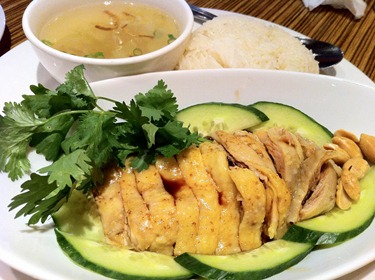 I liked this dish and the girls really enjoyed the tender morsels of chicken.  It was served with a chicken broth and jasmine rice.   You also receive the condiment sauces alongside which to me make the dish.  Tropika serves it with pickled veggies which I always look forward to, but Banana leaf’s version is very good too and the chicken is not as bony. 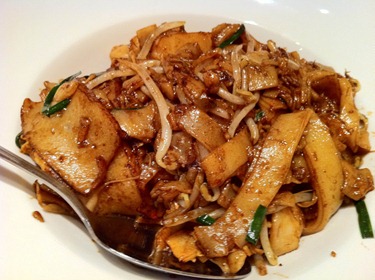 Hor Fun (fried rice noodles)
We had the kitchen adapt this dish for the kids.   They don’t like it spicy.  The kids loved the big pieces or fresh rice noodles.    There were shrimp, egg, squid and fresh beansprouts in the dish. 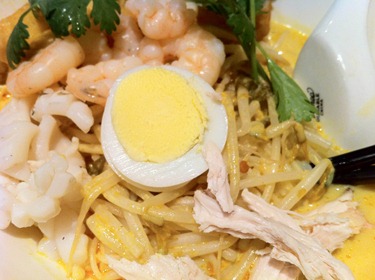 I love laksa.  This was a promising dish as it arrived with tender shrimp, squid and chicken arranged atop the noodle soup.  The rice vermicelli was underneath and though I thought the flavours were really good, I would have appreciated more heat.  Perhaps I’ll have to ask for more heat next time.    It was extremely mild and didn’t have much kick at all.

Banana Leaf caters to Western palates and the service is attentive.   They also have a drinks menu and though I would have liked to try a drink, I thought it too early in the day!  It was only lunch!

They seem to be accommodating to patrons who do not like heat because I overheard how the table next to us was ordering different degrees of heat for their dishes.  Some of the people were deathly afraid of spice and heat and some were requesting fire.  I think it prudent to inform them what you prefer because if you don’t you may be disappointed.  Because we didn’t indicate heat for the laksa and eggplant, they were not as spicy as we would have liked.

The restaurant is dark and tastefully decorated with watercolours, rattan and dark furniture.  It is clean and there is parking in the back.  As well, there is some metered parking out front.  I really like Malaysian and Sinaporean food and will probably be back again!
Pin It
Posted by Cakebrain at 16:54

The coconut won my heart..haha

I just wanted to let you know that I ONLY ever make your dark chocolate cupcakes whenever someone asks for chocolate :D They are spectacular ...and the coconut looks amazing ...and who doesn't love spring rolls

Coconut is the best, love this

aww you guys go to yummy restaurants! i've always wanted to try one of those coconut drinks, but i'm surprised to read they don't taste much like coconut milk!

wow, everything here looks so delectable! look forward to seeing more of your blog!

Hiya! I just found your blog while googling ideas for a last minute castle cake - mine's much smaller and less impressive than yours was - but I was super impressed! thanks for sharing