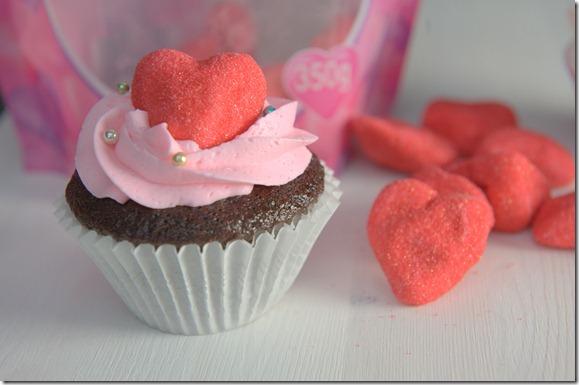 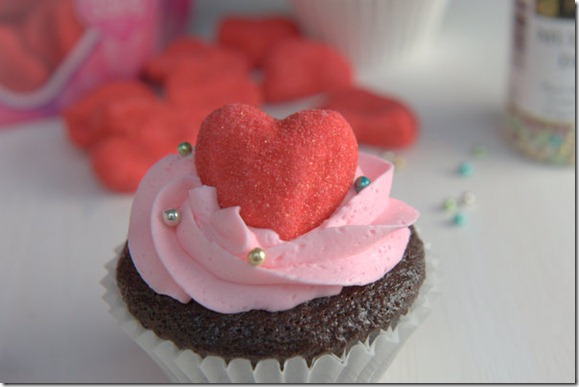 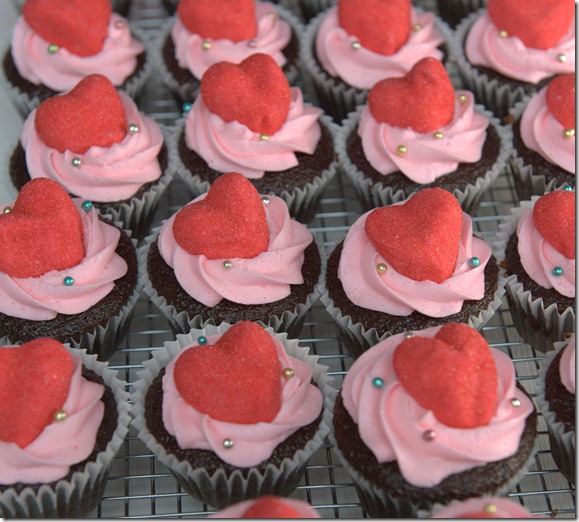 There’s nothing like my daughter’s class Valentine’s day party to get me inspired to bake cupcakes again.  Yes, it’s been a long time.  I’ve made so many other things other than cupcakes.   This isn’t to say cake hasn’t been on my brain!  Let’s get real now! 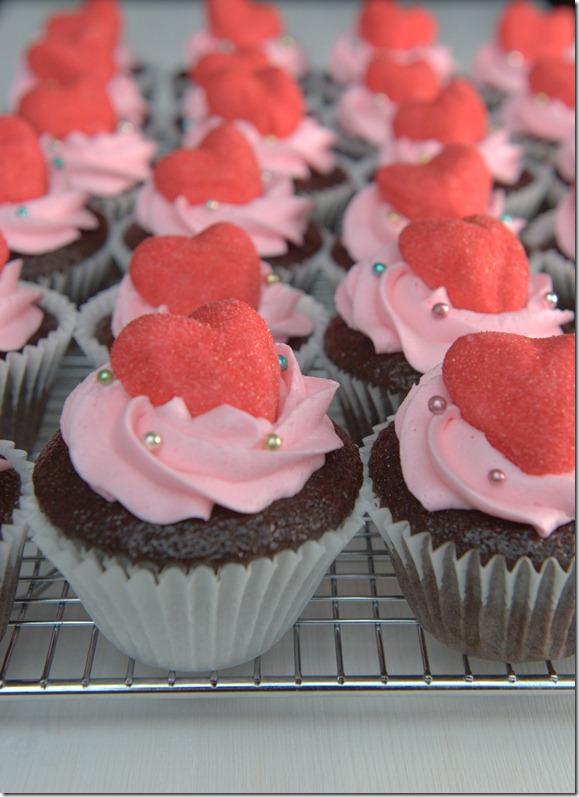 Without further messing around, I’ll get to the point before I have to go to bed (late! again!) The cupcake batter I used was my favourite for quick chocolate cravings:  Barefoot Contessa’s Beatty’s Chocolate Cake recipe…adapted for cupcakes.  You just have to adjust the baking time.  I used jumbo paper liners and was able to get exactly 24 cupcakes.  The baking time was 12-15 minutes. 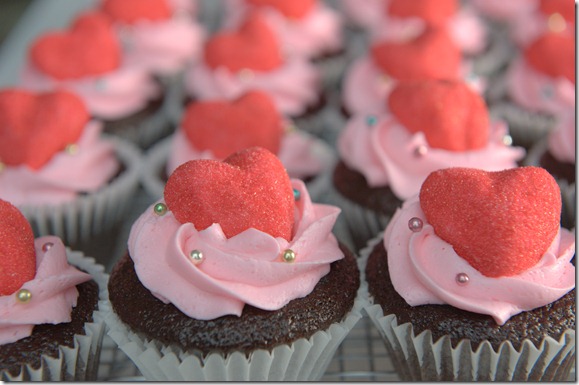 Bebe’s getting older but you can’t blame her for still liking princesses and the colour pink.  I asked her if the boys in her split grade 2/3 class would appreciate pink buttercream, and she said “probably not…but they’ll eat it because it’s a cupcake”.  Yah.  I could have coloured them blue or some other ghastly un-Valentine’s colour.  I’m not  a rebel when it comes to Valentine’s Day though. 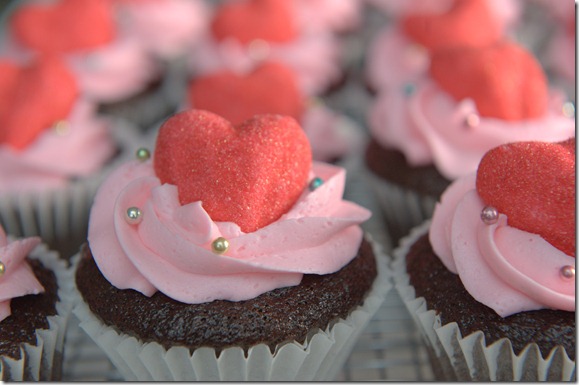 Bebe smartly suggested I make a red buttercream, but she really doesn’t understand the troubles you can get into trying to actually make a buttercream red…it would never really get red enough (just an icky shade of pink)  and I wasn’t too keen on going to the store to seek out a bunch of bottles of red food colouring.   I noticed the local Superstore was sold out of all the red anyway.  I had a brainstorm and noticed the huge bag of Red Heart Marshmallows I had purchased for the girls to munch on.  They were sparkly too.  Bonus! 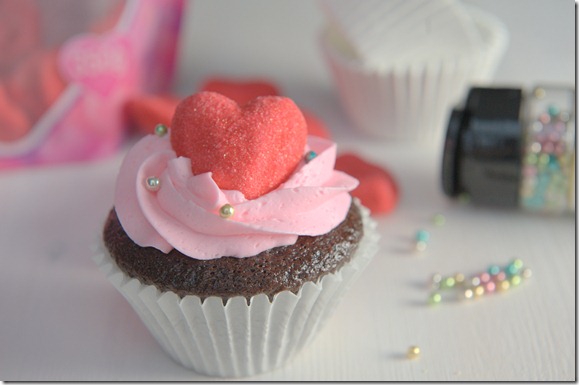 I raided Bebe’s stash of red marshmallow hearts (by McCormicks) and topped each pink-swirled buttercream cupcake with one of the glittery red confections.  As I eyed them admiringly, I thought I’d gild the lily and sprinkle a few coloured dragees too.  Why not? 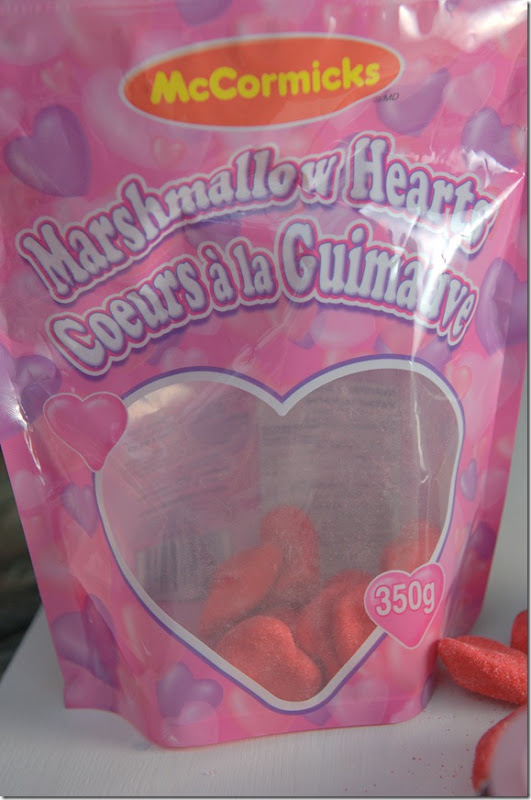 A cheap and easy way to decorate a cupcake for Valentine’s Day:  Red Marshmallow Hearts!  This saved me much time and aggravation as I was contemplating making red heart fondant cutouts to top each cupcake.  I didn’t think the kiddies would enjoy eating the fondant anyway.  Wouldn’t you choose a red sugared marshmallow over pasty fondant?
Personally, I don’t like the crunch of dragees, but they look so pretty and that’s the whole sugary point to this cupcake. 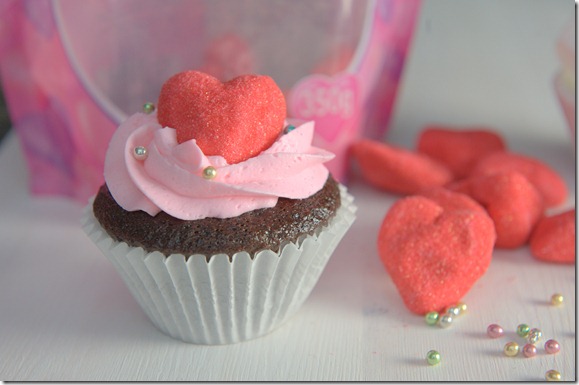 I thought about using a Swiss Meringue Buttercream because it would taste so divine, but I cheaped out and saved myself 5 egg whites (sorry kiddies) and opted for a simple buttercream employing confectioner’s sugar and butter.  It’s simple and pipes well. 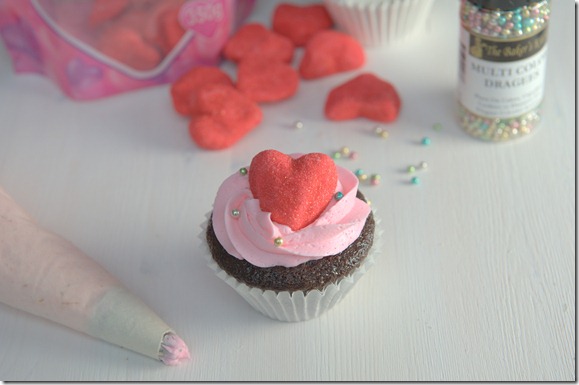 Those look gorgeous. And Beatty's chocolate cake. That's a favorite of mine!! Great decoration, I have the same problem with dragees, hate the crunch, love the look!

oh these are beautiful! the red hearts on top look really decadent somehow, even though they're just candy! it's the puffiness, maybe. :) also don't feel bad about not doing the meringue buttercream, personally i prefer the taste of the simple stuff! maybe the kiddies did too (and if not they don't know the difference right :))

Wow, these look awesome! The dragees are so pretty with the marshmallows...wish my mum baked like that

I'm an amateur baker, and I've always wondered...are dragees edible? Or are they strictly for decorations only? Thanks!