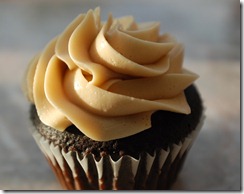 These cupcakes were for my English 12 class. 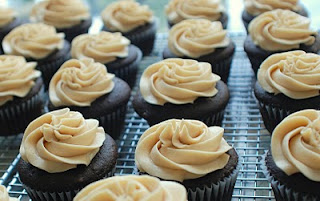 No, I don’t bake regularly for my students, but generally I do so at least once for my Twelves before they leave our school.
I have never made a buttercream from brown sugar before and it was quite fortuitous that I found a recipe for it at the last minute because I ran out of granulated sugar and had intended to top these chocolate cupcakes with a snowy white Swiss Meringue Buttercream.    Consider this a variation of the Best Chocolate Cupcake Ever…a Caramel version. 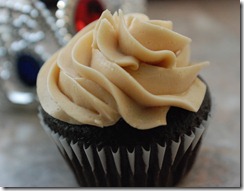 I love the smooth texture of the Swiss Meringue whipped silly until it’s silky smooth on the tongue.  This buttercream recipe is from my Martha Stewart Baking Handbook.  It was doubled to frost 24 large cupcakes.   I recommend my favourite chocolate cupcake recipe.  However, if you’re in a crunch, just use a chocolate cake mix.

The buttercream has a caramel flavour and is quite lovely against the chocolate cupcake. Swiss Meringue buttercreams pipe beautifully and hold up well in warm weather.

The kids seemed to love it and I thought it a shame that many kids today have never  had a REAL fresh cupcake made from scratch—ever.    What kind of society are we creating when the youth have only experienced mass-produced dry crumbly cupcakes swirled with achingly sweet shortening-based frostings made from confectioners’ sugar and studded with multi-coloured crunchy sprinkles? 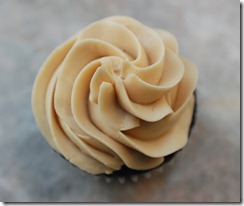 The top view…achieved by swirling from the outside in…of a Wilton 1M icing tip.

****WARNING:  the buttercream will curdle.  You will then swear a deadly streak and think of sending me a wicked comment for this post.  However, you shall persevere and then commence to take a deep breath.  Switch from the paddle attachment back to the whisk and whisk at med-high speed until it all comes together again.  It’ll deflate considerably from its glorious fluffy mass and become rich and buttery looking.   Then, change back to the paddle attachment to eliminate any air bubbles.  The buttercream should be smooth.

I’ll repost the recipe here for my favourite chocolate cupcake recipe (so far!) and the Caramelly Brown Sugar Swiss Meringue Buttercream recipe is below it.  If you’re not up to making the cupcake part—as it requires you to make two separate batches, (according to the recipe, which doesn’t guarantee results if you simply double it) then one chocolate cake box mix will yield you a convenient 24 large cupcakes.

I have had many comments on how successful this cupcake recipe is, so you ought to try it.   Tell me how you like this Caramel version over the original Vanilla Swiss Meringue version.  Hit the link below to see the recipe.

Those look so good with all of that creamy frosting!

That buttercream looks amaaayzing! I love using the swiss meringue method too - the end result tends to be so light and silky.

Oooh... the buttercream topping is inspired. Thanks for sharing it - your 12 graders are so lucky to have eaten this.

Yum! They look gorgeous and delicious!

They look absolutely amazing! Guess I'll have to add these to my already long list of "to make".

Oooh that looks so good, i love swiss meringue buttercream it has such a gorgeous texture.

wow, these look so amazing. caramel and chocolate! what a great combo!

The chocolate cupcakes look fabulous.
I think your students would be very impressed and thankful to you.

It is seriously tragic that so many kids have only ever eaten things like Twinkies and Ding Dongs. Home baked goods are just amazing in comparison. In fact, there is no comparison.

I love the sound of this buttercream! Such a nice subtly sweet flavor from the brown sugar.

Stunning!! I love this!

Simply a delicious blog! So glad I came across it! I want to take a bite of these right away. I am now a follower! If you want to take a look at my blog and let me know how it is! http://petittreat.blogspot.com/

Thanks for the recipe. It sounds yummie. I hate swiss meringue.... or at least the fact that it always curdles. :( But it will come back, you are right! I'm excited to try this!

They look so lovely! I could gobble a few up in one go!

I love your blog! The pictures are amazingly beautiful. I've been looking for pretty icing for cupcakes, I have not baked very much before this year - will try your buttercream frosting soon.