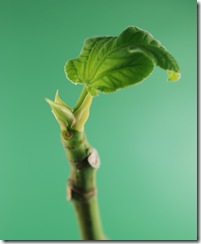 So I want to grow figs.

I’ve been busy what with school starting and haven’t posted in eons. However, recently, I’ve immersed myself in fig culture trying to figure out how to grow myself a gorgeous fig tree in my backyard. I don’t particularly like dried figs, but fresh figs are a revelation.

I called all around and didn’t find any fig trees in any garden centres at this time of year. Undeterred, I researched how to propagate fig trees from green cuttings…and just jumped into it by using a neighbour’s fig tree for cuttings.

My neighbour’s fig tree yields big juicy green figs with a pinkish centre. They are honey-sweet and truly amazing freshly picked from the tree. You know the figs are ripe when they’re hanging from the branches all heavy, juicy-plump; looking as if they’re going to explode. A gentle squeeze and you’ll know that they’re ready to be picked.

Let me be clear here. This is an experiment on my part. I have never propagated anything in my entire life. I don’t know anything about plants. I just want to grow myself some food! I just called a nursery and asked a few questions. I looked online and I read a whole lot of information…often contradictory. 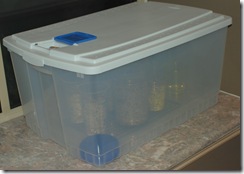 Apparently, there are many people out there that are seriously passionate about growing figs. They say it’s addictive.

I’m just glad that I haven’t killed all my cuttings so far. 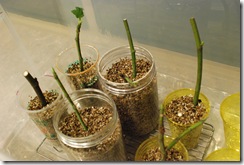 It’s been 12 days since I stuck fig sticks in vermiculite. I started out by dumping out all my old purses that were stored in this large rubbermaid container. 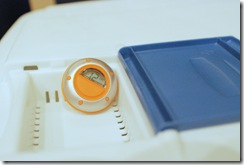 The lid has a vent that could be opened and closed so I thought that would be good. I heard that you could use clear plastic cups (the taller the better) because they are flexible and you can see proper root development. I went and bought myself 2 bubble teas (not a hardship on my part). I cleaned the cups and searched around for more plastic cups but only came up with smaller party cups and 2 large plastic mayonnaise jars. 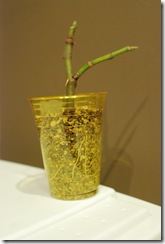 The party cup is not ideal because it’s not tall enough. Oh well. 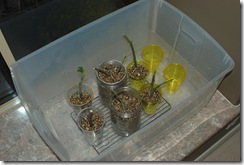 I found an old cookie rack and placed that at the bottom of the rubbermaid container. At the bottom of each cup, I pierced drainage holes and then I filled them with vermiculite. I moistened the vermiculite well with tepid water and let the water drain through. 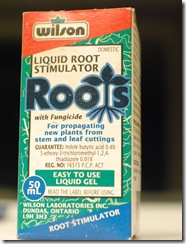 I dipped my cuttings in root hormone and inserted them into the vermiculite. 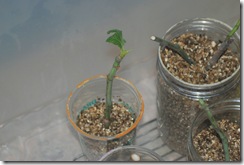 I even placed two extra cups in the rubbermaid container to hold extra water so as to provide a humid environment when the lid was closed. 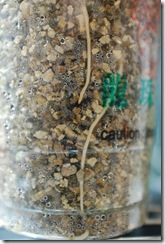 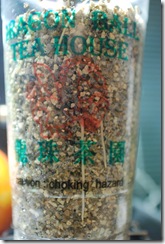 The environment under the lid is quite controlled. I don’t have a thermometer in there, but I think it’s pretty humid. I didn’t have to water the cuttings at all (for fear of mold growth) and besides, you can see it’s moist enough because there’s condensation on the sides of the cups. As you can see through the plastic bubble tea cup, there is significant root development from some of the cuttings. I found the leafless cuttings had more roots and the cuttings from the ends of branches started to grow little fig leaves. 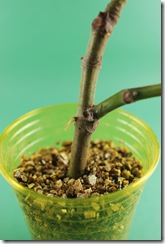 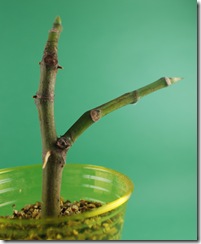 Does that look like a root way up there as it branches off? What am I going to do with this now?

I have a few weirdly spaced cuttings but I threw caution to the wind and rammed them in vermiculite too just to see what would happen. One of the double-branched cuttings with leaves didn’t have much root development perhaps because it was using up energy to keep those leaves alive. I subsequently snipped off the leaves to allow the cutting to direct energy to root development. Hope it works. 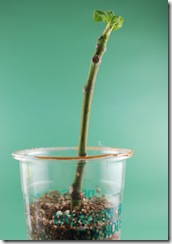 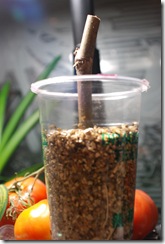 Here’s how it looks so far: the cutting on the left, which initially had a leaf bud at the end, is starting to grow a little fig leaf. I don’t see much root development. The plain old leafless stick on the right has tons of roots and is also starting to have a little green bump on one of the nodes.

Right now, I’m airing out the cuttings every day by opening up the lid, looking for mold growth and generally inspecting them for root development. It’s a good idea to open the lid every day anyways for ventilation. In general, the lid is on most of the day though. I just leave the vent open on the top of the closed lid. Lately, I noticed a little bit of fuzz on some nodes so I just took some of the root hormone and a cotton swab to them. The root hormone said it had a fungicide in it, so I was hoping that might kill off whatever the heck the fuzz was. I heard somewhere you could disinfect your cuttings before putting them into the cups, but I didn’t disinfect them at all. I couldn’t be bothered. When I saw the fuzz, all I had on hand was hand sanitizing gel…so I used that with the cotton swab to wipe it away. I could be doing a whole bunch of things wrong but I’m not going too much out of my way to spend extra money on this project. I just want a fig tree (for free). I’m crossing my fingers. I’ll post again if they survive to the next step, which is potting soil. I have to wait for more roots though I think. There’s always winter for me to start all over again if I totally screw this up!

good lock with that! i just have a balony here in london and try to grow veggies, so far, the only survivors are the chives adn the rosemary! eggplant is ok though..

loved your blog, wil be back,

Wouah, good luck with this project!! Do you know how many years to wait before having some fruits? I have no idea how fast this kind of thing is. But I envy you. I LOVE figs. But only fresh ones. I hope you'll have some soon enough!

Good luck with your fig tree...I suddenly had a one of those taste memories a few days ago of poached figs, I CANNOT remember where I used to buy them, somewhere in NYC I know for sure...but they were gorgeous and now when I next see figs I am going to buy them and try my hand at poaching them....wish me luck too!!

I, too, love to grow things. I mostly grow herbs and tomatoes being that I only have a second floor deck and pots to work with. I hope your figs take root and grow and produce figs for you and your family for years to come.

Don't give up and keep us posted.

Great post and thanks for sharing this with us. If I ever buy a house with a garden, a fig tree is definitely one of the trees I'd love to have. Good luck with yours.

Love your site! Had a question about your "chocolate playdough". How long does it keep? If I needed to work with it for about 4 days--is it ok for that long? Also, have you ever used fondant & if so, which brand do you recommend? As a cake decorater I think they generally taste awful but I'm hopeing there is something I've missed. Thanks for your input! Happy cooking!

Natalie,
thanks for visiting...and yes, I agree with you about the taste of fondant. I have heard that marshmallow fondant is better (but I don't think by much). The only reason why I use Wilton fondant is because it's darned cheap with a Michael's coupon. I save my 40% off coupons to buy things like a big package and it lasts forever if you wrap it well. I also think chocolate plastic lasts a long time if you store it properly (and don't contaminate it). I have had no problems using chocolate plastic that is a week old. It's primarily sugar anyway. Think of it as candy. Each ingredient on its own is pretty shelf-stable so if you combine them it shouldn't change its ability to keep. I think 4 days will be okay. Just make sure to knead it well (to warm it up and soften it) and you're good to go.

oh my... love your virtual image!! amazing mix of pic's!!