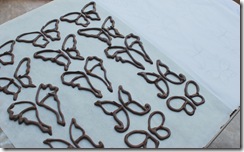 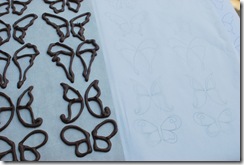 if you can’t draw a butterfly to save your life, just locate some line drawings and trace them through the parchment. No pencils necessary!

Yes, it’s been a long time since I’ve posted. I have holidayed in Seattle and come back and I’ve made many cakes that I have yet to write about. I purchased way too much cool stuff at Mrs. Cook’s and Sur La Table but all I can say is at least I’m doing my bit to help the economy.

Though travelling is way more fun now that we have a larger (and brand new) vehicle with dvd players in the headrests, I caution you not to get these things unless you’re sure your kids don’t get car-sick watching t.v. Bebe threw up on the way back up to the Canadian border. Fortunately, I had stored the potty right between the kids in the back seat because there was no room in the trunk. I heard a cough…followed by the wet belch. Immediately, my motherly instincts took over and I grabbed the potty and swung it under her mouth just in time. yuck. At least, after cleaning up and freshening up at a rest stop, Bebe slept the rest of the way home and that helped alleviate the usual painfully loud banter and petty fights between the two kids. 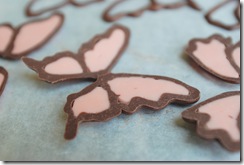 I realize I’ll never top Bebe’s 5th birthday cake: Ariel’s Underwater Castle. It was a multi-dayed project that resulted in a lot of oohs and ahs, but I didn’t feel that her 6th would warrant such a large cake. For one, only having 6 girls at a ceramics studio means not much cake is going to be eaten. I decided upon cupcakes instead. Bebe’s into butterflies so I thought I’d make her some chocolate ones to decorate the cupcakes. Since pink is her colour of choice, I have pink bodies surrounded by a chocolate-brown outline. This colour scheme mimics the chocolate cake and pink buttercream too. 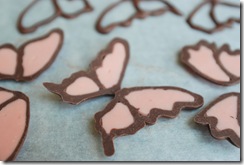 After lining an upside down sheet pan with parchment and securing it on one side, I slid a sheet of butterfly patterns underneath the parchment. I chose to just do wings and opted to leave the antennae out. If you want anatomically correct butterflies, go ahead and pipe a pair of antennae in chocolate for each pair of wings you make. I find them way too tiny to deal with to bother. After finishing the sheet of images, I just kept sliding the template over to create more butterfly images. I set my chocolate over a heating pad set on low heat to keep it from hardening too quickly. I find it easier than a pan of hot water. The only problem I encountered: air bubbles in the chocolate as it cooled. You have to pipe pretty fast. The air bubbles ruin your ability to make thin, even lines.

When the chocolate outlines harden, you can fill a piping bag with another colour of chocolate (tint white chocolate using a gel paste or powdered food colouring or use coloured candy melts). The wings have to dry completely and after they do, you can carefully peel them off to use them. If you make a whole bunch and want to store them, I’d advise you just leave them stuck onto the parchment. I cut my chocolate butterfly-adorned parchment into small squares and stored them in layers in a plastic container. 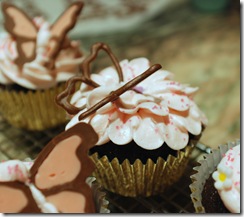 You can use the chocolate butterfly outlines to decorate your cupcakes too. You just have to handle them very carefully as they break if you jostle them or even breathe on them. As well, you may want to wear gloves because you may melt them or leave fingerprints. I have cool hands so I just worked quickly. The ones I ruined, well, I just swore and them popped them in my mouth. It’s all good. Let it go. 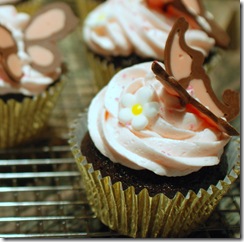 Not willing to leave well enough alone, I decided to make little fondant flowers and plopped those on the cupcakes too. Check out the Castle Cake (Part 1) for instructions on how to make fondant flowers. 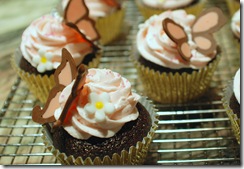 I found that setting the wings into the freshly piped buttercream to be the easiest way to set them into “butterfly form”. Since I didn’t make antennae I also didn’t bother with the bodies (which you could pipe in with buttercream I suppose. I figured there was enough buttercream there to hold the wings in place. Check out this post for a quick and easy recipe for buttercream. 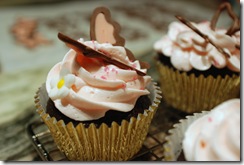 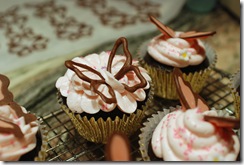 Looking at the simple and elegant chocolate butterfly outline over the filled in outline, I think the outline looks way more classy and I like them better. Plus, they’re way faster to make! 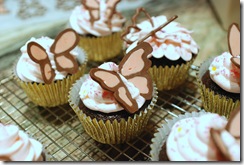 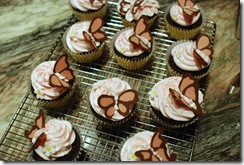 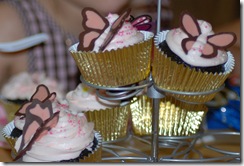 I placed the cupcakes on a cupcake display and stuck a pink Wilton card-holder pick with Bebe’s birthday greeting on the specially decorated top cupcake. I decorated the circular scalloped card with pink rhinestones and made sure everything was sparkling with pink sprinkles and dragees. With two girls, I now know how to kick up the girlie factor. The cupcakes earned some special longing gazes in the build-up time before the birthday song.

Now that I’ve done birthday cupcakes instead of the big honking cakes of yore, I’m liking it. None of the kids really eat any of the big cakes anyway…most of it usually ends up in the trash and they go off running to play after a few bites. At a kid’s birthday there has to be cake, I know, but having gone to dozens of kids’ birthday parties by now, I’ve noted how little cake is eaten by the kids. It’s all about the cake topper and the singing of the song and the blowing out of the candle. Another thing I like about cupcakes: no need for cutting! I also brought along Chinese takeout containers so the girls could take home any leftover cupcakes to their siblings or parents. Less mess, less hassle and way less work! I think I’m converting to birthday cupcakes from now on! I’ll be thinking of how to make edible birthday cupcake toppers and how to add more bling to cupcakes. I’ve decided to keep a sketch book for future cupcake designs, edible toppers and flavour combinations. What a revelation! It’s going to be fun!

The butterflies are super cute!! You're right, they look much better with just the outline. But the pink must have appealed to the 6 year olds! They look real cute that way! Youd did a great job, I'd love to have something of this sort on my birthday!

Wow, you did such a good job!! They look absolutely adorable and little girls love butterflies and pink colour.

So pretty! I'd love to try this idea for a baby shower I'm doing next month. What tip did you use to pipe the buttercream on the cupcakes - not the swirled top, but the flower looking buttercream top?

Oh my, you sure make delicious look easy to make. I will have to try my hand at that piping a design. The cake was so awesome on your other post WOW! not sure I would have the patience to do anything like that, besides once made, I wouldn't want anyone to touch it, let alone eat it!!!

The cupcakes are beau-ti-ful! I will have to try it soon. I love cupcakes for parties, too.

About your Seattle trip: Lucky for your mommy instincts! Imagine having your new vehicle christened that way - yuck, although I know someone whose daughter did it by wetting her pants.

Looking forward to hearing your finds at Mrs. Cook and Sur La Table as well as your other baking projects.

Wow! What a beautiful cupcake for a six year old princess!

Beautiful butterflies! I'd love to give this a try, I'll just have to come up with a more manly topper for my 3 boys.

Those are so gorgeous. I'm glad you had a great holiday (especially since mess in the car was cleverly averted at one point!), but I do wish you would post more often! ;P I love looking at your creations.

Cupcakes are indeed fun and with endless possibilities. The butterflies are just too cute!

These butterflies are beautiful. I find that I'm getting better at piping outlines without making my shapes too wonky but I still need lots of practice at filling them in. I just haven't got the knack of that yet. However, I do like the butterflies that are just outlined. I find that sprinkling them with glitter also hides a that some of mine will not quite fly!

Melissa,
I just used a Wilton 104 tip (the same one used for roses) and I just zig-zagged back and forth around from outside in with buttercream.

Oh wow!! I love how elegant and pretty these cupcakes look! Could i ask what tip you used to pipe the outlines for the butterfly wings? I've tried piping with chocolate but mine always break when i'm trying to pry them off the baking paper :(

What a simple yet very elegant way to make butterflies, thank you for sharing...the finished cupcakes look beautiful!! I could happily eat one or two right now!

Serene,
I have 2 different ways I like to pipe chocolate: with a piping bag and a Wilton tip#3 or a squeeze bottle. I find a squeeze bottle can allow better control and you can sometimes cut off the tip to suit your needs.

Those cupcakes are soooo pretty!!

Very cute! I'd like to do this sometime, I'm just too scatterbrained for decorating though :P Using an offset spatula is also good to ease them off very gently (a cleaver might work too, haha! :)

Butterfly cupcakes are awesome. they look adorable, i need to try them out

I am so impressed! These look absolutely amazing!

Love the butterflies on the cupcake...so lovely...I'd have a hard time to eat them :-)

So pretty! I was debating about trying something similar for my daughters 1st birthday. Your post gave me the push I needed. (you can check out my version if you want at www.sweetbakerbabes.blogspot.com) I love the "flower petals" on some of the cupcakes. Wow!

Ohhhhh I did a similar thing for my niece's birthday too! I did both chocolate and white candy melts colored blue. Everybody like the blue better but I perfer the chocolate. All the kids, boys and girls, loved it! Just wish the cup cake tasted as good as it looked.