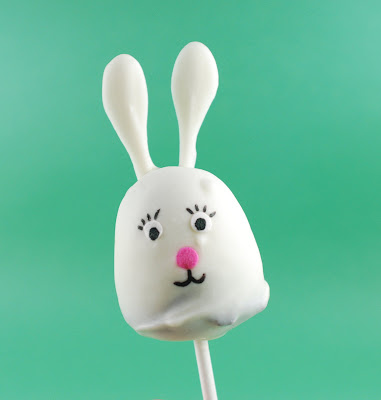 Everything tastes better when it's on a stick!
Corn dogs, fudgsicles, lollipops, candy apples, shish kebabs and the like have a good thing going. Who can resist food when you impale it?
It's fun. Kids love it. You can't be grumpy or sad holding stick food.
One of the few difficult words my 2 year old can say is "lollipop". Well, actually she calls them "yawyeeepops". She doesn't really get them very often at all but for some reason, she knows the word. 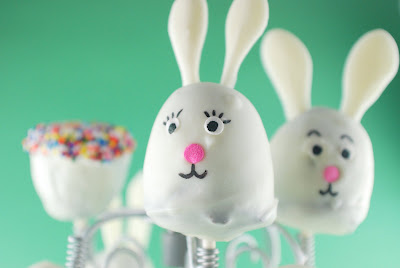 On a recent excursion to Michaels with my 40% coupon, I discovered Wilton Brownie Pop molds. The tray makes 8 pops and is made of silicone. I think that when another coupon comes along I'll have to get another tray because one tray isn't sufficient to bake a full brownie recipe. I had to wait until one tray baked and cooled to make the second batch. A full brownie recipe makes 16 big brownie pops. I suppose you could make more pops...you just make them smaller. Mine were pretty big though. 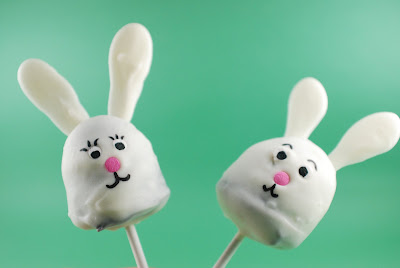 I used Alice Medrich's Best Cocoa Brownie recipe and since there was no leavening agent, there wasn't a problem with leaving the batter to sit on the counter waiting for the first tray to be done. The brownies held up well and didn't fall off the sticks...and they even dipped well for me: no crumbs in my white candy melts!
I used the Wilton melted white candy melts to make bunny ears. On parchment paper, I used a small rubber spatula to smear ear shapes...and allowed them to cool. I used a sharp pointed knife to make "ear-holes" at the top of the brownie pop so that I could insert the dried ears in carefully. They're delicate but it worked! 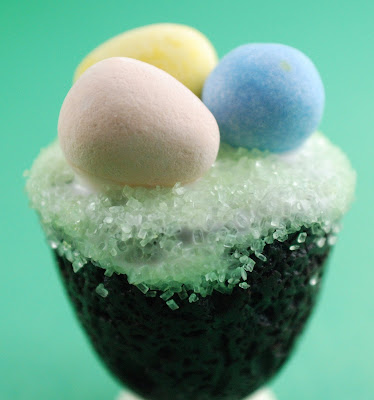 I even used the candy melts to help anchor the right-side up brownie pops onto a disc of unmelted white candy; creating a little pedestal. This kind of looks like a basket but I was too lazy to pipe basket handles from royal icing. Instead, I dipped the top of the basket in more melted white candy and sprinkled it with green sanding sugar to look like "grass"; then I plopped some candy-coated chocolate eggs on top. They kind of look like baskets. I know that green-tinted dessicated coconut would have made for better grass but I hate the texture of dessicated coconut in my food. 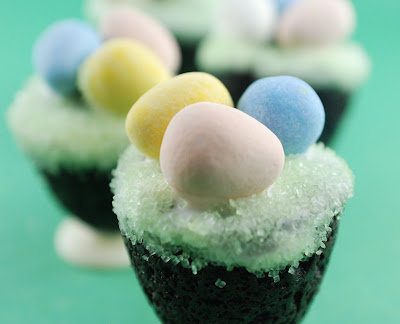 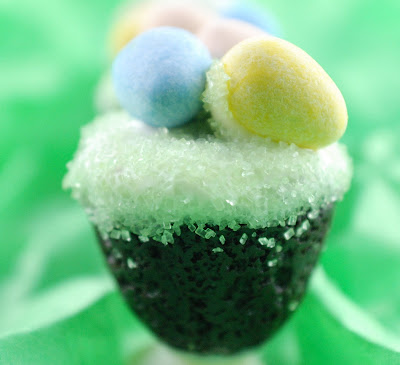 But I digress.
Get yourself some of those cool shaped sprinkles from the cake decorating section of Michaels...or whatever store you frequent and use 'em for eyes, feet, noses, beaks etc. The Wilton sprinkles worked fine for me. I used the little pink discs for rabbit noses and used a food-safe black "gourmet writer" to draw the lashes, eyes and mouth. The Gourmet Writer is cool. It works exactly like a felt-tip marker. I bought this at Michaels too.
In no way am I affiliated with Michaels, people. I just like to use 40% off coupons. I clip those coupons from my flyers (or get 'em online) and go every time I have one. I'm loathe to buy something there full price. Cheapie me. I know.
It's gettin' late and I'm heading to bed. My next post will include Medrich's brownie recipe along with my Brownie Birds on a stick...and I'll show you what my lolly stand and brownie pop tray look like too. update: click here for the recipe and a look at the chicks
Pin It
Posted by Cakebrain at 23:16

These are just utterly adorable, you are truly, very much truly talented in the kitchen! I would not know where to begin with this Easter Delight = )

These are just adorable! You are quite talented, I would never be able to do something like this :).

Those are the CUTEST pops, EVER!! LOVE THEM!

How cute ! I love the bunnies especially :)

With all the sweet stuff I put on sticks, how did I not know about the brownie pan??? I'm getting one immediately. Thanks for sharing! I posted a link on my edible crafts site, too, of course (ediblecrafts.craftgossip.com).

oh my gosh if these aren't the cutest things ever!

THey look terrific! I've seen those mold but as you mentioned if it's not 40% off I'm not buying it.
~ingrid

hello, if you like cakepop you should visit Bakerella =)
http://bakerella.blogspot.com/

Lin,
I've been a big fan of Bakerella for a while...and I have previously posted my Banana Cake pops based on her technique.
This Wilton Brownie Pop mold is different in that it is preformed and doesn't rely on frosting to hold together crumbled baked cake. This brownie mold is way easier in my opinion because now the pops don't slide down and you don't have to refrigerate them to harden the balls. I like brownies too.

Absolutely too good not to repost: http://momentumoffailure.wordpress.com/2009/04/03/easter-brownie-pops/

Thanks for the Pre-Easter (preASTER?) idea!

Oh my goodness. Seriously, these pops are too precious for words. I'm loving the springtime, Easter spirit!!

These are very funny and cute - actually very creative on your part. I too tried baking cup cakes and brownies just after my exams got over. I go weak in the
knees with a mention of muffins and brownies.