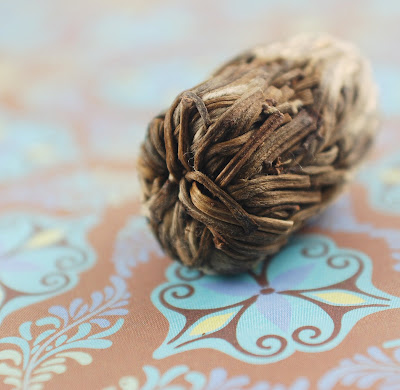 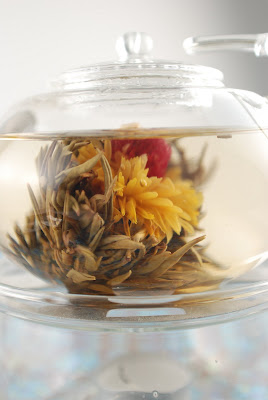 All the snow we've had in Vancouver has just recently started to melt. We had a white Christmas and a very white New Year's too. This was the biggest dump of snow I've seen in a long time.
The kids even had their first go at toboganning and it was so much fun!
As for me, I had my own sort of snow-fun. You see, when snow falls in Vancouver, I get kind of excited about shovelling. It must be genetic. My mother shares the same sort of disposition towards things that have fallen on the ground. In the fall, she rakes leaves incessantly. When it snows, she's out there shovelling, even though she shouldn't be because she might slip and break a hip.

I can't stop her though because she'll sneak out there without telling me sometimes. So now you know why I haven't posted in a while. I've been shovelling and shovelling. BTW, Stomach doesn't do snow. He loathes shovelling and is simply glad that he lives with a shoveller. It's such a good workout! Our snow tends to be wet so it's so much heavier that the stuff they get everywhere else in Canada. Then the stuff at the bottom turns to ice and it's slippery as hell.

Since I shovelled in the New Year, I thought I was doing quite well with my resolution to be healthy and happy. Now that the snow is fading, I'm thinking of visiting my treadmill and Total Gym more often. I have cut down on my sugar and refined stuff because as you know, I totally indulged over the Christmas holidays; especially with my Christmas cookies!

This month I'll be baking Bib's 2nd Birthday Cake. I'm aiming for a more modest cake than the one I made for Bebe's 5th Birthday (the Ariel Castle Cake). I'll be making something with a Winnie the Pooh theme. Probably chocolate. Probably lots of buttercream. It'll be good, I think.
Here's some shots of my blossoming green tea in action. I took a shot about every minute or so. 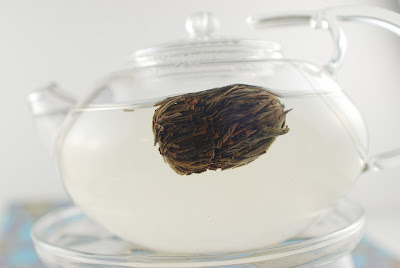 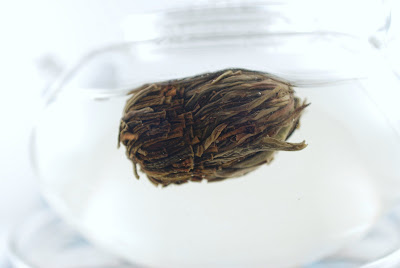 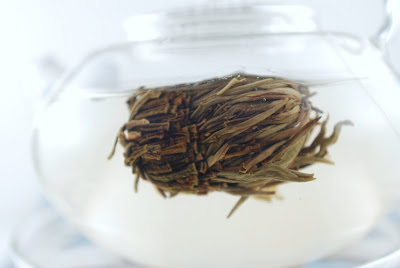 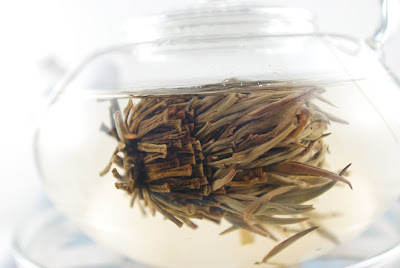 Below, as you can see, the tea ball slowly rights itself after absorbing enough water-- to become upright; revealing at the same time the flowers hidden inside the green tea leaves. 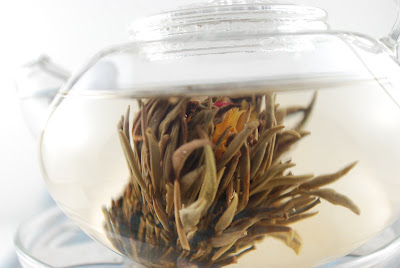 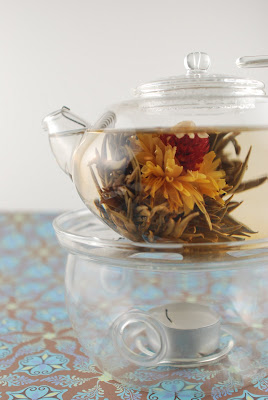 I recently staved off a tickle in my throat post New Year's Eve (most likely caused by overindulging in fried foods, mulled wine and sweets!) by drinking copious amounts of my secret home remedy for colds: Chrysanthemum Green Tea. I used my Blossoming Green Tea and infused each tea ball at least a good 8 times in my little pot. Stomach even drank some because he wasn't feeling all that well after indulging at the New Year's Eve party. I supplemented with Red Reiishi caplets and probiotics and I'm feeling good as new. The green tea is slightly astringent-feeling going down and it cleared up all that tickly feeling. 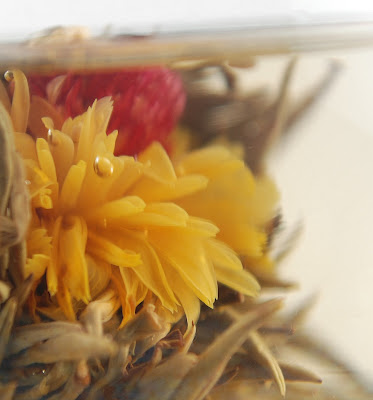 Not only that, but I feel so special drinking the blossoming teas because they're so beautiful! They're hand-tied and crafted to bloom in the hot water. I've purchased some inferior tea balls in the past before and what happens is the tea leaves are kind of messy-looking as they bloom. Sometimes they might drop off the ball. Sometimes the quality of the leaves can be disappointing. The flowers might not be centred properly or the thin string at the base which holds all the green tea leaves and flowers together, can be seen (so not cool in my opinion)! This brand that I have here is very nicely crafted and I have no complaints. They're beautiful. It's best to have a clear pot or glass to watch the action. The tea-balls reach full bloom in about 5 minutes. 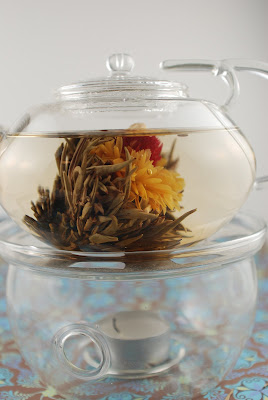 It's actually quite difficult photographing tea. I didn't use a filter on my lens (guess I should have!). I imagine a clear soup would be just as difficult to photograph; what with steam and all that being a problem for the macro shots. 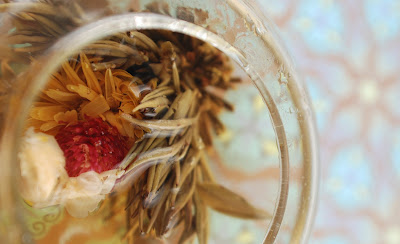 here's a look into my little tea pot and below is the brand of tea I use in case you're wondering... 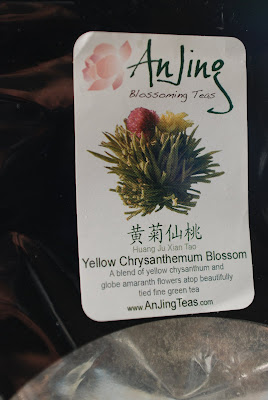 I am a huge fame of Blooming Teas... they are especially fabulous when you have guests!!!

That tea looks so cool! I'm not a big tea drinker, but I may have to try this!

Ahh so pretty! I could do with a bit of detox myself! :D

That was beautiful photography! I love blooming teas, but I'm not sure that I could capture mine as well as you have. And that must be a good brand, no little floaties coming off or anything.

I always like to see how each "blooming teas" will turn to. It's just so amazing and beautiful :)

I have seen these before and love them!!! SOO CUTE!!! I actually got them for relatives last year for Christmas and they loved them! Great converstation pieces!

That is BEAUtiful! Silly little label had to ruin the surprise though :/ The snows fading already? It just never stops here for some reason! Well, either way, please be careful out there!

I can't wait to see your next cake :D

Oh that's a gorgeous tea! I've never seen anything like it!

I've never seen anything like this before and it's beautiful.

I have never tried one of these teas. They look fantastic!