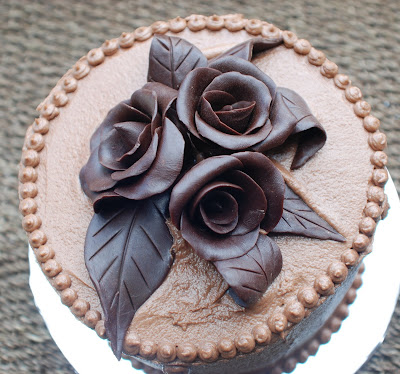 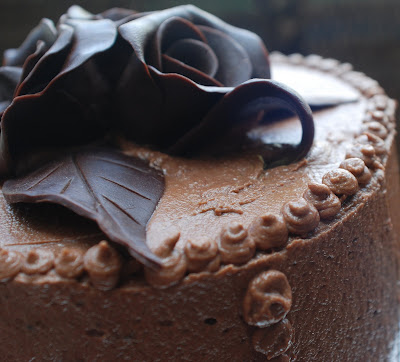 I have a very good excuse for not having posted for a while. Really! I do. 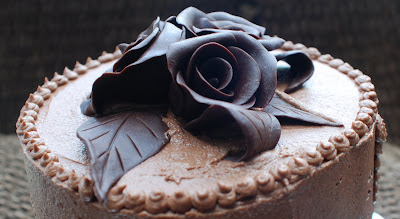 Bib is now recovering from a UTI she developed about 2 weeks ago. At first I thought she was teething (two bottom teeth happened to pop up at this time), but her fever continued and she also started to alternate between fevers and chills. This was going on for about a week and it was worsening. She was fussy and seemed to be in pain all the time. The doc told me to go to emergency if it didn't get any better. He thought it might be either a UTI or perhaps she was fighting a virus. So I did the next day after seeing him because she seemed to be worse. Thank god I did. At Children's emergency, they took 2 vials of blood. Stomach said, "do you have to take that much? she's only a little baby". The nurse kind of just shrugged and did it anyway. 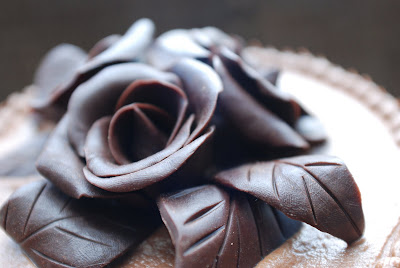 They also put her on an IV and she went through 2 bags of the IV fluid because she was dehydrated from vomiting so much. She was crying 2 hours straight and kept trying to rip the IV out of her. I felt so bad for her. After the urine test confirmed her UTI, she was put on antibiotics. Almost overnight, her whole demeanor changed and she wasn't as fussy. I was able to put her down to sleep (instead of carrying her all night long). Most importantly, I was able to get more than 2 hours of sleep thereafter! I think I'm too old for this kind of stuff. I should have had kids when I was younger!

My other excuse: a stack of essays for marking that's about 6 inches thick. This is just part of the other marking and prep I have to do. The marking is kind of weighing down on me mentally as well as physically. You see, it's always at the back of my mind. If I go out for dinner, I'm thinking that I ought to be marking when I get home. If I play with the kids, I think I ought to be marking (but I don't mark because I want the kids to have time with me). If I sit back and help Bebe with her piano practice, I have a stack of marking next to me and I'm marking...or I'm thinking that I should be marking while she's practicing. Geesh. Most importantly, when I'm blogging, I'm thinking about the ominous stack of marking next to me. I realize the marking burden will never end until June sometime. I should have thought about being a P.E. teacher or something!

Today I'm going to show you something wonderful you can do with Chocolate. You can mold and shape it (like fondant) into roses! I used Nick Malgieri's recipe to make the "Plastic Chocolate". All it is, is corn syrup and melted bittersweet chocolate. I halved the original recipe and used 1/3 cup corn syrup and 6 oz. melted chocolate. I knew full well that I'd have too much if I used the full recipe because all I wanted was to make flowers. I didn't need it to cover a cake.

You essentially wait for the concoction to cool down a few hours and then you knead it (it's very stiff) until it's pliable. Roll thin between plastic wrap and cut petals and leaves. I used my Wilton flower-making kit because it has the perfect sized circle cutters for the petals and leaves. Working with chocolate plastic is like playing with the kids' playdough. It's so fun! If something doesn't look right, you can just ball it up and try again! you can etch it, roll it, stamp it, cut it and most importantly (unlike playdough) eat it! I'll post a step-by-step guide on how to make a chocolate rose soon. I still have quite a bit of the chocolate plastic left over and will make some more flowers and perhaps some other nifty things... 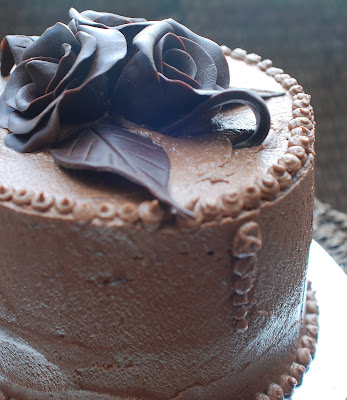 The chocolate cake that I made was the Barefoot Contessa's recipe. It's a never-fail, go-to recipe for me. It never disappoints. I decided to try Greenspan's Chocolate Malted Buttercream recipe. The frosting is a bit disappointing because its consistency is too loose for piping properly and the texture of the buttercream is particularly grainy (it contains light brown sugar) even though I followed the instructions to the letter. I even beat it for additional minutes as instructed as the mixture seemed too loose. The flavour is okay but I don't think I'll be working with this one again because I don't enjoy decorating with it. It doesn't hold up very well at all. It's a perfect frosting for swirling, but it definitely doesn't work well for a smooth polished look. The malted frosting also tends to weep and sag under the weight of the top layer of cake. Once chilled though, the butter in the frosting sets it up hard. Though Greenspan indicates to bring it to room temperature to serve, I like the frosting better cold. I think I'm the only person out there who likes cold buttercream! I love buttercream that's cool and slightly solid. Not rock hard, but almost! I know the flavour's supposed to be better at room temperature, but I'm not as crazy about buttercream that's greasy-feeling in my mouth. That's just me, I suppose.

wow wow wow these are awesome. I want to make them :) These are really nice .

Oh you poor thing. No sleep and a sick little one too. Do hope she is much better now.
Those chocolate flowers are stunning. But, all you work is stunning and we don't expect any thing less from you now, sorry. You have set a high bench mark for yourself.
Well done to you.

Oh my, I hope your little baby is fealing better now!
I've been meaning to make chocolate playdough for a while, it does sound so fun! And much tasty than fondant! Can't wait for the rose tutorial, cause those look perfect!

I'm glad your little girl is doing better. It's scary when they're so sick. I've gone through it all with my two girls... Your chocolate flowers are beautiful! I've never tried anything like that.

I have seen this chocolate "playdough" on a book I own but haven't been brave enough to try making it. These roses are SUPERB!!

Thank you everyone for your kind thoughts! Bib's doing fine now (and eating up a storm to catch up on the weight she lost while she was sick!) Later on we'll just have to take her in to "check out her plumbing" as the doc said...

Gorgeous!! And so are the macarons below!

that cake is so stunning! sweets usually (always) make everything better :)

Those are gorgeous! I wish I could create something like that!

it's so true - when the kids get sick, everything else stops and all attention gets focused and rightfully so.

Now - this cake - it's unbelievable - and if you used Ina's recipe - it's so the best. I definitely have to try this "plastic chocolate" adventure - such a great finished product.

Wow, that is quite the cake! YUM!

hey
i should use the same expression as by snooky doodle 'wow wow wow'..the chocolate roses look so alluring and beautiful...death by chocolate is so so apt...nice work..flawless...very well portrayed.

It sounds like you are really busy. I am glad that Bib is ok now. Those chocolate roses look absolutely amazing!

I've made white modeling chocolate in the past but I think I added too much corn syrup for our warm temperature, and it was hard to work with :( You made your roses so beautifully :) Sorry to hear about the flimsy frosting-- I think it looks beautiful, though :)

Oh, by the way, I am glad to hear lil Cake on the Brain responded well to antibiotics! I hope she is fully recovered by now :)

Hope your Little One is back 100% now!
I ave just made quite a load of these for a wedding cake last week. I always curse at first when I think about the quantity but there is something relaxing about the repetition of the movements.
Well done!

can you use any kind of syrup?i don´t have any corn syrup

Miriam,
No, do not use any kind of syrup. For instance, maple syrup, agave syrup and other flavoured kinds of syrup may be too runny. As well, they will impart a particular flavour to the roses.

Your roses, by far, are the prettiest I have ever seen. Wow! Id love to pluck the little darlings and gobble them all up!

Hi. I wanted to make chocolate plastic for my cakes but you dont get corn syrup in my area. Could you tell me any substitute that i can easily make at home????

I have no experience making corn syrup nor do I think it is worth trying considering how difficult that would be and how comparatively cheap it is to buy.
I do not think there is anything you could use to substitute because of the consistency that is required in the finished product.

I tried making the chocolate plastic this weekend with two failures. I'm wondering if you've for a step by step on what you did? I ended up with seized chocolate. Did you put the corn syrup in with the chocolate as it melted or did you stir it in once it was melted?
-Renee

Renee,
It's been such a long time since I made chocolate plastic! As I recall, I melted the chocolate first, then I stirred in the corn syrup. It should not seize unless you get some water in the mixture. It does however get extremely stiff. You might be misinterpreting that for seizing. You should keep kneading it together and with the warmth of your hand, it should come together.