BACK TO SCHOOL TREATS 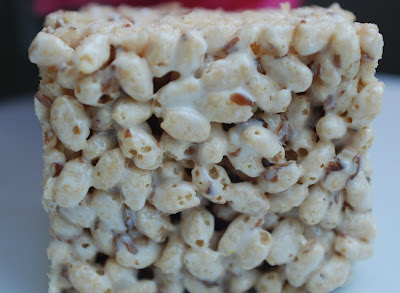 organic brown rice crispies squares with ground flaxseed
I know...I know. There's a ton of sugar in marshmallows and though Rice Crispies Squares seem pretty benign junk food-wise, they do have that ooey chewy marshmallow sugar-high factor that is oh so true to junk food. 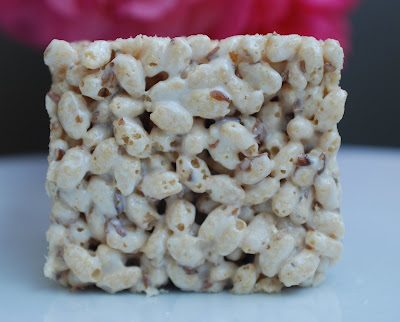 Yes, the treats have cereal, but I personally don't think most of the cereals you find in the supermarket aisles are very healthy breakfast options because of the high sugar content. That being said, of course I feed cereal to my child occasionally. Perhaps once a week or once in two weeks, Bebe sometimes has Cheerioes multigrain cereal or her favourite cereal: Kellogg's Guardian All Bran cereal (primarily for the little heart shapes I think). Though these cereals have the fibre I so want to include in her diet, they also have a fair amount of sugar. Since she doesn't eat cereal everyday though, I don't think it's too much of a problem. In fact, I rarely police Bebe's intake of sugar and don't deprive her of a few jellybeans or M&M's if she wants them. You know I would never say "no" if she asked for cupcakes or dessert! She has pretty good self control and I've never seen her over-indulge in anything sweet. She's so not like mommy ;)
My mommified rice crispies treats have been doctored in as healthy a way as possible without compromising on the much-loved taste of the original recipe we all know. I used organic brown rice cereal, marshmallows, unsalted butter and freshly ground flaxseed in my rendition. Flax is so yucky on its own that I have to hide it somewhere and this is as good a place as any.
If you ate these treats, you wouldn't be able to tell the difference between the original recipe and the "healthy" one. The flax is not detectable. hm. Probably because of the marshmallow. Well, I tried. Doesn't that count?
So, if you want to feel less guilty about eating rice crispies squares, then by all means take the original recipe and add up to 1/4 cup freshly ground organic flaxseed and replace the regular rice crispies cereal with organic brown rice cereal. I don't think it's necessary to locate healthy marshmallows. I just used my favourite brand from the supermarket, but I suppose if you had the energy you could use homemade chocolate marshmallows as I have in the past. Homemade is always best and you can never go wrong by adding chocolate to stuff.
Pin It
Posted by Cakebrain at 20:21

I find rice krispie treats too sweet as it is anyway, so buffering it with flax (though I admit I've never tasted this) and nutty brown rice cereal should be a good solution. I'm game for these healthy treats.

I don't know how you're able to go through cereal so slowly. I find that they get soggy really quickly!

I use flax seed all the time, I also like to "hide" it, you can't really tell. Do you have an idea how much I love rice crispy treats? I could eat a whole pan (I'm not like your daughter, lol)! It's allways nice to try helathier options for the yummy treats we love! These are great!

I'm sure you're right that it's the marshmallows that makes this treat yummy. I admire that you are trying to allow your children the enjoyment of fun treats yet you've made them sneakily healthy!
~ingrid

I love RC Treats. I actually snuck some flax in my son's smoothie yesterday. He had no idea, and I figured it was a healthy addition. I'll have to try sneaking it into these now!

I love adding flax to recipes - people just never know it's in there. Your treats get a big thumbs up.

I ve never used flax seed. These look such as a nice treat,

I would go back to school if I could get one of your treats:)

i like rice crispies, but yeah too much of it can really make my mouth too sweet. This would be wonderful with all the flaxseed in there.

My boyfriend loves rice krispie squares. I don't use marshmallow in mine, so it usually isn't overly sweet. Nice idea though, using organic brown rice cereal. I might try that next time, but will skip the flaxseed :P

Wow, now when eating these I don't have to feel guilty...rather healthy instead!

With flax seeds and brown rice cereal it's healthfood! :-) At least it sounds like it. haha. A great way to make you feel less guilty about sweets. I could eat a whole pan of these too. Yum!

Oops, sorry, it took me awhile to get back to you! My recipe for rice krispies uses mars bars (which you melt down), not marshmallow. I prefer it because it seems just that little bit less cloying and one dimensional, having that additional chocolate and caramel flavour to it.

y,
I should have known you'd have another groovy idea up your sleeve. That's something that I'll have to try!

Oh WOW. These look fantastic! My boyfriend uses flax seed all the time in his cereal (and he loves rice crispy treats!) I'll have to try out this recipe. Thanks so much for the tip!

Heh. Maybe I should make them again soon. They're certainly no less unhealthy than regular rice krispie treats though! :)

flutterbyblue & Y,
that's how i justify a lot of my desserts...add flax or some form healthy fibre, a dose of matcha to fight carcinogens and a pinch omega-3's! It certainly can't be worse than eating them without the healthy stuff in it!

flutterbyblue & Y,
that's how i justify a lot of my desserts...add flax or some form healthy fibre, a dose of matcha to fight carcinogens and a pinch omega-3's! It certainly can't be worse than eating them without the healthy stuff in it!

Those look good! They sound healthier as well. :) It has been too long since I last had rice krispie treats.