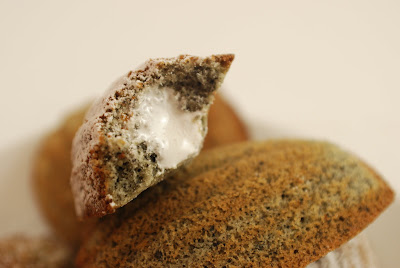 marshmallow creme filled black sesame madeleines
This is my Asian-French-Twinkie fusion version of a madeleine! 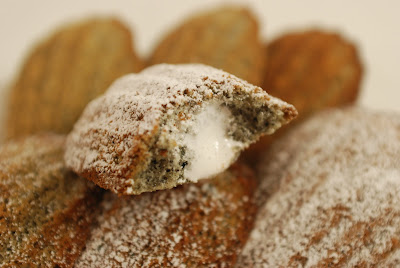 any excuse is a good excuse to eat marshmallow creme: just ram your piping bag's tip into the madeleines and try to force as much marshmallow creme in there that you can without the little cake exploding!
I toasted some black sesame seeds and buzzed them in my Bullet until they were finely ground. I tossed that in with the flour in my favourite Madeleine recipe and then filled the baked madeleines with marshmallow creme. 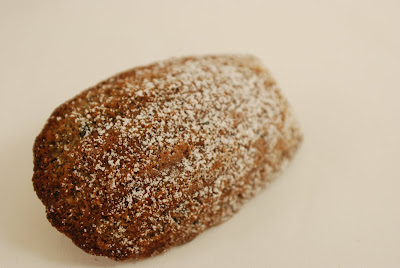 They were really good but I must admit not as delicate and pretty looking because they had that awful grey hue from the black sesame. The marshmallow creme was a perfect foil to the nutty sesame flavour and the confectioners' sugar did wonders to accent (hide!) the grey cast on the little cakes. 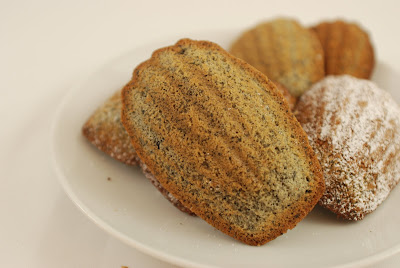 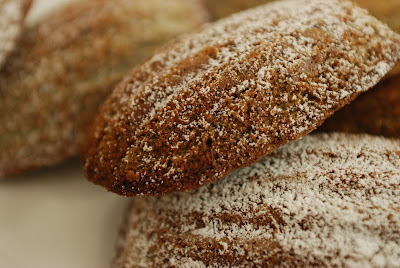 In adapting the recipe, I incorporated 1/3 cup black sesame, toasted and ground finely. The baking time was shortened somewhat from my previous trial without the sesame. You just have to keep an eye on them as they bake quickly. After the "hump" develops, it's pretty soon that they'll need to come out. They'll take approximately 8-12 minutes in a 375 degree oven.
Pin It
Posted by Cakebrain at 22:11

Hee! How creative! How did you get that marhsmallow cream inside? :)

I have to confess I'm not a fan of sesame-based desserts but I haven't yet tried black sesame before :)

Delicious! that is so creative and wonderful! I love it!

Kudos - what a neat experiment and don't you just love that bullet? My only complaint with it is way too many pieces - I can never remember what does what.

Love your site, great when I crave for sweet stuff.

What a great idea! I would have never thought of that, but looking at them I wish I would've!

This is SUCH an awesome idea. I've never seen a stuffed Madeleine before. God...now my brain is just going nuts with the ideas... Thanks for sharing!

mark,
with great difficulty! use a long tip on your piping bag and watch out for exploding madeleines!
black sesame is way different than regular and lends itself to desserts

my mind has been blown.

Asian twinkies! Brilliant! I've been looking for a good excuse to go buy a madeline pan.

Gorgeous madelines! Reminds me that I haven't baked them in awhile, time to make them revisit my kitchen, I think :)

I have thought of using black sesame seeds in madeleines but haven't gotten to that. I am glad to find a review here. :)

I'm already crazy about madeleines, but these are magnificent!

Wow, I love that you experimented with sesame in a madeleine. I would never have thought to do that! Marshmallow cream stuffed inside of things is always a good thing :)

Absolutely amazing. A big hit. I had a Madeleine tasting and made four different kinds. The black sesame marshmallow was number one choice by most. This put a totally new spin on Madeleines for me. This recipe is truly genius to be repeated many times again.

Dantys,
thankyou for the kind words!
wow, it's been a while since I made these. I had forgotten how good they were and need to get back on the black sesame thing. I'm glad you liked them. It remind me I need to use my madeleine pan again!