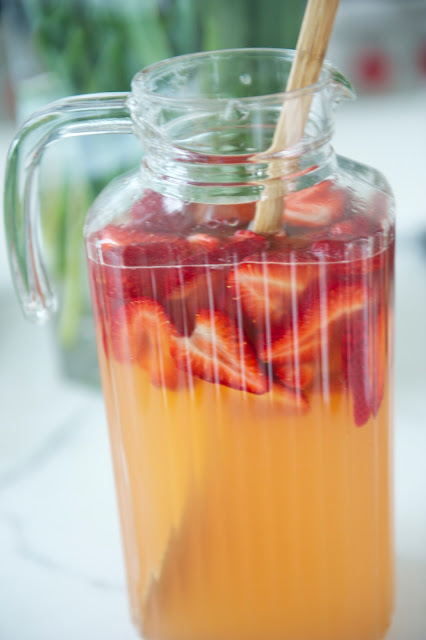 Depending on your lemons, you should get about 1 cup from 5 juicy Meyer's Lemons.  The ones I had were huge and full of juice.   The lemons were also way sweeter than regular lemons, so I didn't need to add much sweetener.  The fresh strawberries also helped with sweetness and added a nice pink tinge to the lemonade. 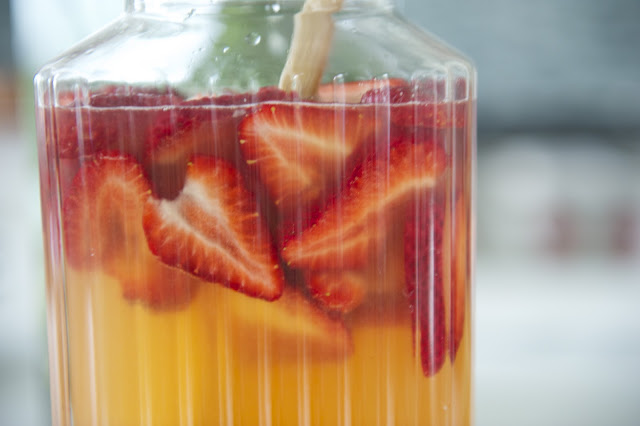 This lemonade is perfect for a picnic or summer barbecue.  If you don't have agave nectar, you could add simple syrup to taste.

By the way readers, I apologize for the long absence between posts!  I have been MIA because my doc has prescribed for me a lifestyle change.  My Hashi's has been causing me to fluctuate from hypo to hyperthyroid these past few months.  I have been feeling kind of weird lately (irritable and emotional) and had been breaking out and getting cystic acne.  He told me that I could alleviate my symptoms by regulating my insulin levels which should help in turn regulate my hormone levels better (thus reducing my acne flareups).

So that means not only am I GF, but he distinctly said No Sugars.  Avoid simple carbs.  Yikes!

Sugar was all I had left!  I think I adapted well to the Gluten Free deal.  Then I held back on the dairy because it contributed to my hormonal acne.  Now he says that I must also ensure I do cardio 3 to 4 times a week.  I admit I fell off the running wagon this year since starting the Grad studies because I had no time.  I have to run at night because that's the only time I have after marking essays, making the kiddies' lunches and snacks and writing my own reflection papers (Grad studies is all over reflecting on your learning it seems).  Sometimes I'm too pooped to stay up late to run on the treadmill.

Well, despite my tiredness, the hardest step towards running is the anticipation of having to do so.  When I'm actually on the treadmill, time flies since I watch Netflix on my computer.  If I'm dead tired, the least I'll do is a brisk walk for the duration of a movie (that's 70 to 90 minutes) and if I'm energetic and/or it's early in the evening, I might alternate between a light jog and walking on the treadmill.  Right now, I have no inclination to run outside because it's too dark.  Maybe in the summer it'll be better.

So I am happy to say that after 2 weeks of doing the prescribed cardio 4 times a week, my cystic acne that was primarily located on my chin, has cleared.  I will need to keep this up for a month to see if it truly is working.  I'll admit I've succumbed to sugar on more than a few occasions.  I haven't baked at all as you can see...but I have these awesome dark chocolate covered dried coconut chunks by True Bliss that I have been addicted to.  First one little square...then another.  Then the rationalization that dark chocolate is good for me...you get the drift.  I've usually downed a handful of little dark chocolate coconut chunks before I'm done.  For sure on those days I do my cardio.  Being dairy-free is tough.  I'm trying to find how much I can get away with ingesting because that can contribute to the acne since there's hormones in milk and it also has a lot of simple sugars. Since the chocolate almond milk I was drinking tasted so good (i.e. had tons of sugar in it), I had to stop drinking it.  I have now switched to unsweetened almond milk (30 calories per cup) and that has been good.  It tastes way better than soy milk, which I shouldn't be drinking anyways because people with autoimmune issues like Hashimoto's should stay away from soy and goitrogenic foods.

So why this recipe for a sugar-laden (albeit agave) strawberry (which is goitrogenic) beverage?  Well, my kiddies and my guests don't have to eat my way.  I think I could make it sugar-free but then I'd have to use Splenda.  I didn't want to do that and agave is easy to use, dissolves readily and you can adjust the sweetness easily.

I am eyeing the Paleo diet and have been thinking about giving it a try to see if it helps all these wacky symptoms of Hashi's.  I think this is something I'll be working on slowly to ensure success as it's really a lifelong lifestyle change.  Paleo is no grains, no legumes and beans, no dairy, no sugar, no processed foods and possibly no fun!  Don't tell me medjool dates used as sweetener is going to help you make a delicious-looking chiffon cake.  I know it won't.  I have a feeling that I'll be making a lot of dense cakes and brownies.  I think the no grains deal is the toughest because before I could still substitute rice, corn, sorghum, tapioca and other flours for wheat and gluten-filled flours.  Now, I'm perplexed.  If I make almond-flour based cakes, my kids can't eat them because they're allergic to nuts.  So if I bake, I'll have to eat it all myself which doesn't really help my health at all.  If I have a treat occasionally, it'll have to be small batch baking for me.  I'll be working on small batch Paleo baking I think.

I've been eyeing a recipe for some Paleo brownies lately and I do have medjool dates (eww!) because my Meyer's Parrot loves those and I always keep them on hand.  I also have coconut flour, which I think will be my buddy from here on.  I'll still be baking tons of regular stuff for my family but I'll try to ease the kiddies from eating normal baked goods to some of the Paleo ones.  I know for sure that I can make everything GF and not have it taste GF.  In fact sometimes it tastes better than the wheat-based baking!  GF is truly not difficult for me anymore.  My Quinoa Chocolate Cupcakes are my go-to recipe.  The challenge now is doing the Paleo diet.   You know I'm gonna cheat on the Paleo like crazy sometimes.  Especially on the weekends when I go out for restaurant food, which has tons of sugar.  And it's so constricting; especially for a baker.  This will certainly be a huge challenge for me balancing the joys of life with quality of life.

Stay tuned for my escapades with dates, coconut and honey! 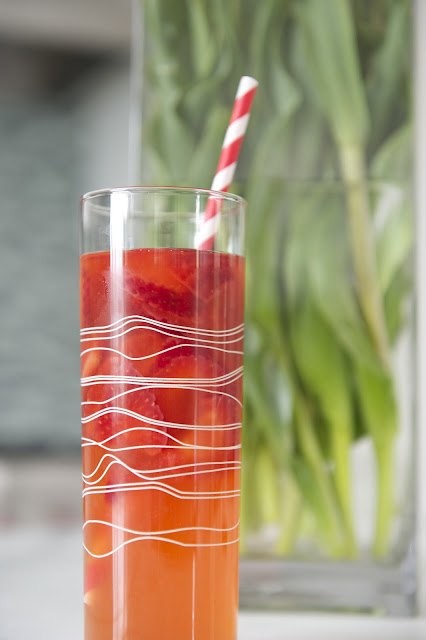 Here's the lemonade recipe for your next barbecue:

1.  Pour the lemon juice into a large (2 litre) pitcher.
2.  Add water and stir well.  Stir in the agave nectar and mix thoroughly.  Taste and adjust if necessary (this depends on the sourness of the lemons you have)
3.  Add the sliced strawberries to the lemonade.  Stir.  Cover and refrigerate at least 3 hours to allow the strawberries to macerate and flavour the lemonade.
4.  Serve cold. 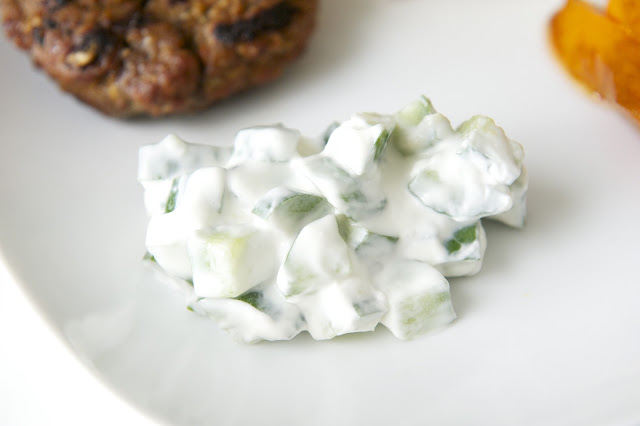 1.  Chop the cucumbers into large chunks.  Place in a colander or sieve and lightly salt
2.  Allow the cucumbers to drain for about 2 hours in the refrigerator (placed over a bowl)
3.  With paper towels, squeeze gently or blot the cucumbers of any remaining liquid; discard the cucumber liquid at the bottom of the bowl.
4.  Mix sour cream and tzatziki with the cucumbers.
5.  Season with pepper.  Refrigerate until ready to serve. 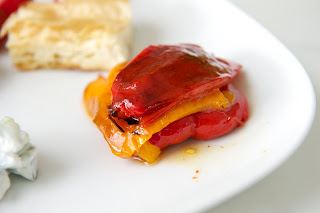 1.  Place the whole peppers on the barbecue.  Grill until blackened/charred.
2.  Place the peppers in a large pyrex bowl.  Cover with plastic wrap and allow to cool.
3.  Scrape the charred skin from the peppers.  Slice in large chunks; discarding the seeds, membrane and stem.
4.  Drizzle with olive oil.  Season with salt to taste.  Serve at room temperature

The perfect BBQ accompaniments...now we just need some sunshine here in the UK! :-)

so this is a total drag for you, but i am also excited to see what you will come up with! i remember you were pretty bummed when you first had to go gf and now you are like the master of gf! i bet you will reach a point where you won't even miss the hard stuff (sugar) anymore.

I seriously hope that lemonade is as good as it looks!

i want to down that pitcher of lemonade right now!! the weather is making me thirsty :P

This looks delicious ! Going to try this !