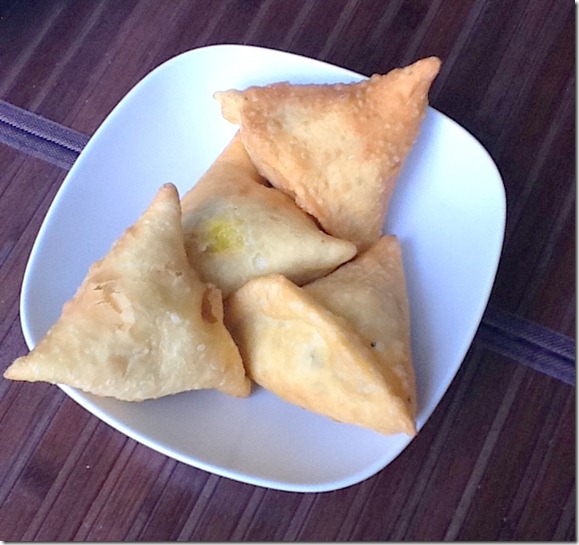 Veggie Samosas from Dera Indian Restaurant.  2 pieces for $1.50.  Cakebrain's rating: 2/6…my bar is high and these didn’t make it over the bar.

I yearn for Indian food quite often.  As you can see from my Twitter feed where I “Foodspot” pictures of the restaurants we have been eating at around Vancouver, the rest of my family likes Asian food.  I’m outnumbered.  Stomach and Bib love all Chinese regional dishes, especially Cantonese and Shanghai.  Bebe, at 8 years old, prefers Italian and Greek.  Her favourite Greek dish is Spanakopita.


A compromise is those Hong Kong Cafes where they give you a complimentary drink.  These Cafes remind me of those Chinese Canadian diners in the 70s where a Chinese cook would make hamburgers, fries, meatloaf, chowmein and chop suey for a mainly Caucasian diner.  Well, these Hong Kong cafes have it the other way around…where they make burgers, fries, noodles, fried rice and such for the Asian palate.  The steaks are always mushy in my opinion (too much tenderizer) but they do noodles and fried rice adequately and sometimes really well.  At these establishments, the kiddies get their fries, grilled cheese or spaghetti bolognese and daddy can have Rice Noodles with Beef and mommy can have whatever her heart desires…except Indian food.

I put my foot down this weekend and we decided to eat Indian food.

However, going to an Indian restaurant as a family is out of the question as the girls would not have much to eat other than plain naan.  They don’t appreciate the hot spicy dishes that I think are a requisite to an Indian meal. So, I would order take-out from an Indian restaurant and make the girls spaghetti.  Fortunately, Stomach has come a long way in appreciating Indian food.  He used to balk at it all the time but I think he’s learning to appreciate Indian food more often. 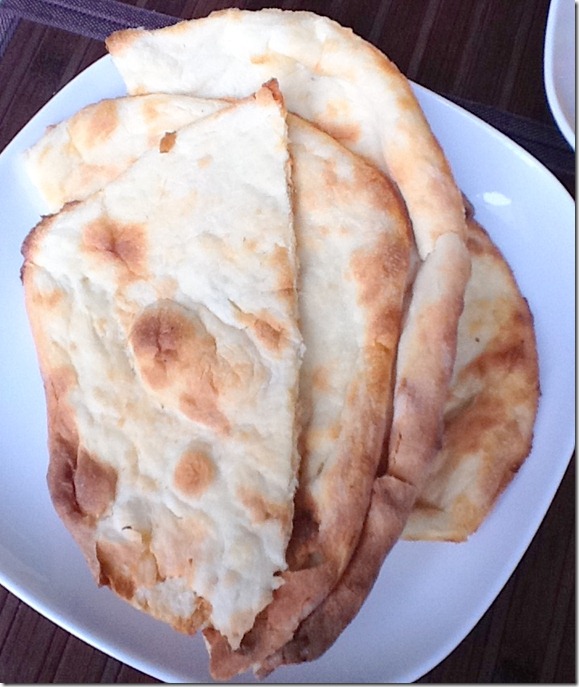 Usually, we order food at Raga on W. Broadway.  I love the complexity of the spices and the food is delectable.  I have always enjoyed their dishes and have not been disappointed. 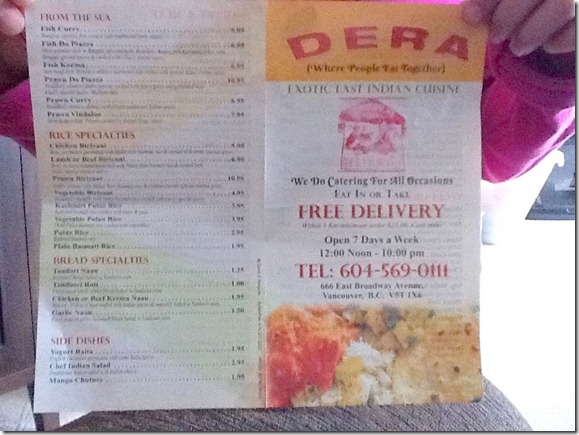 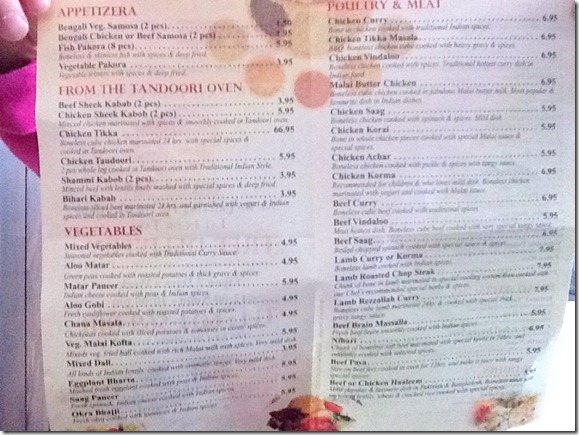 Stomach pointed out on my Urbanspoon app on my NEW iPad2 (I love it love it love it!) that there was a restaurant nearby that looked appealing.  The food looked cheap and the few reviews it had were promising.   Indeed, the prices were cheap.  2 veg samosas for $1.50?  Eggplant Bharta for $5.95?  What’s going on?  It’s like 1980’s prices!  We had to try it.
I was anticipating the Eggplant Bharta…it’s one of my favourite Indian dishes.  I have no inclination to make it and imagine it’s difficult (though all my Indian friends tell me otherwise). Hey...do you see how much the Chicken Tikka is?  $66.95? It had better be good for that price, har har! 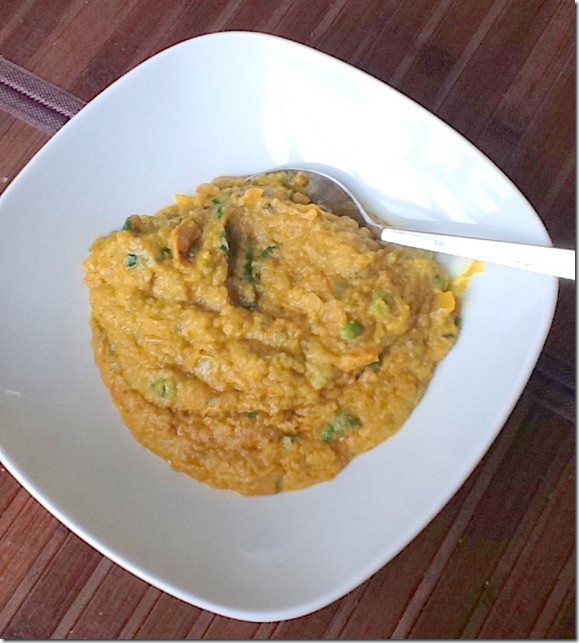 Stomach brought back two large brown paper bags.   My mouth was drooling in anticipation.  The naan was wrapped in foil and was huge.  We ordered plain naan because sometimes the kids like to munch on some.  It didn’t have the charred bits on it that I love so much from the oven.  However, it was warm and soft and great for sopping up the sauces. 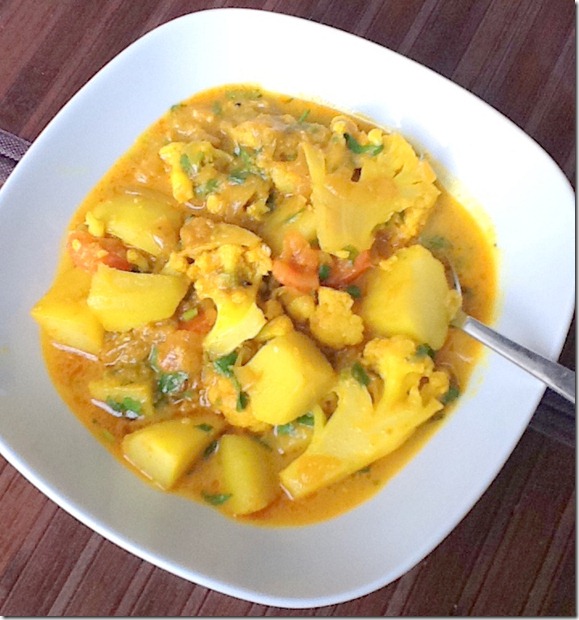 My second favourite Indian dish is Aloo Gobi.  With cauliflower and potatoes, this dish is usually very savoury and in my experience it is always drier than this Dera version.  I didn’t like it at all.  It wasn’t spicy enough and lacked salt.  It looked to me as if the dish were water-logged, which is probably why it lacked oomph.  The flavours were muted and not as good as what I’ve had at Raga or other Indian restaurants. 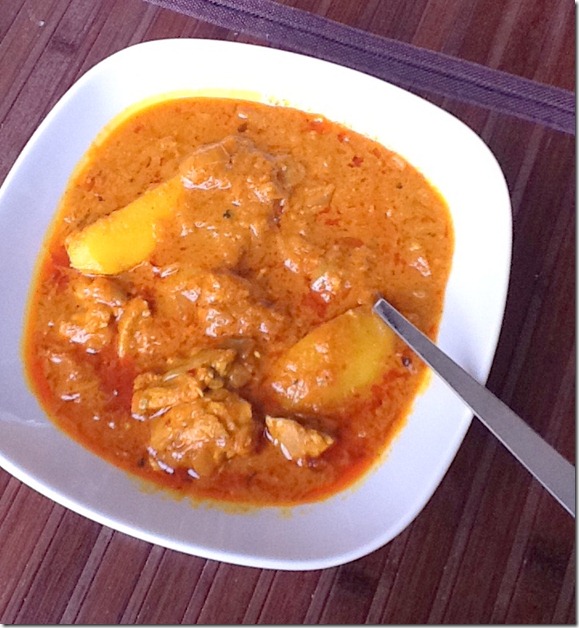 Chicken Vindaloo: $6.95  If you like hot dishes, this is the one to get.  We ordered Medium and it was quite hot…but good!  I liked this one and was pleasantly surprised by the tender morsels of chicken (dark meat).    Cakebrain's Rating:  4.5/6

All in all, Dera satisfied my Indian cravings.  I was very disappointed with the Samosas and the Aloo Gobi, but everything else was good.  As well, it was cheap.  I have to tell you though, that the dishes were on the small side.  The Aloo Gobi, Chicken Vindaloo and Eggplant Bharta came in those smaller-sized foil take-out containers with lids.  This is probably why they’re cheaper.  You do get what you pay for.  At Raga, the full-sized dishes are twice as big as Dera’s.  We didn’t have much leftover from the Eggplant or Chicken dishes.  The naan and samosa portions were huge.  The chutney that I ordered to go with the samosas was too sweet and one-dimensional; kind of like a sweet and sour sauce in appearance.  The Veggie Samosas, though huge, were doughy. There wasn’t much veggie filling inside the huge samosas.  In fact, as I bit into one, I noticed it was largely cavernous with a few peas and not much in the way of potatoes.  Major disappointment because they really looked promising.

I would definitely try Dera again to see what the other dishes are like because we can order a variety of different dishes for a good price.  I would steer clear of the Samosas and Aloo gobi in the future though.

Gobi is my favortie :) But I hate eggplant :( My mom ruined it for me - I'll tell you about it someday at work.